Terrorist attacks have been carried out by people of all ethnicities. What police need to look for is strange behavior, not dark skin. 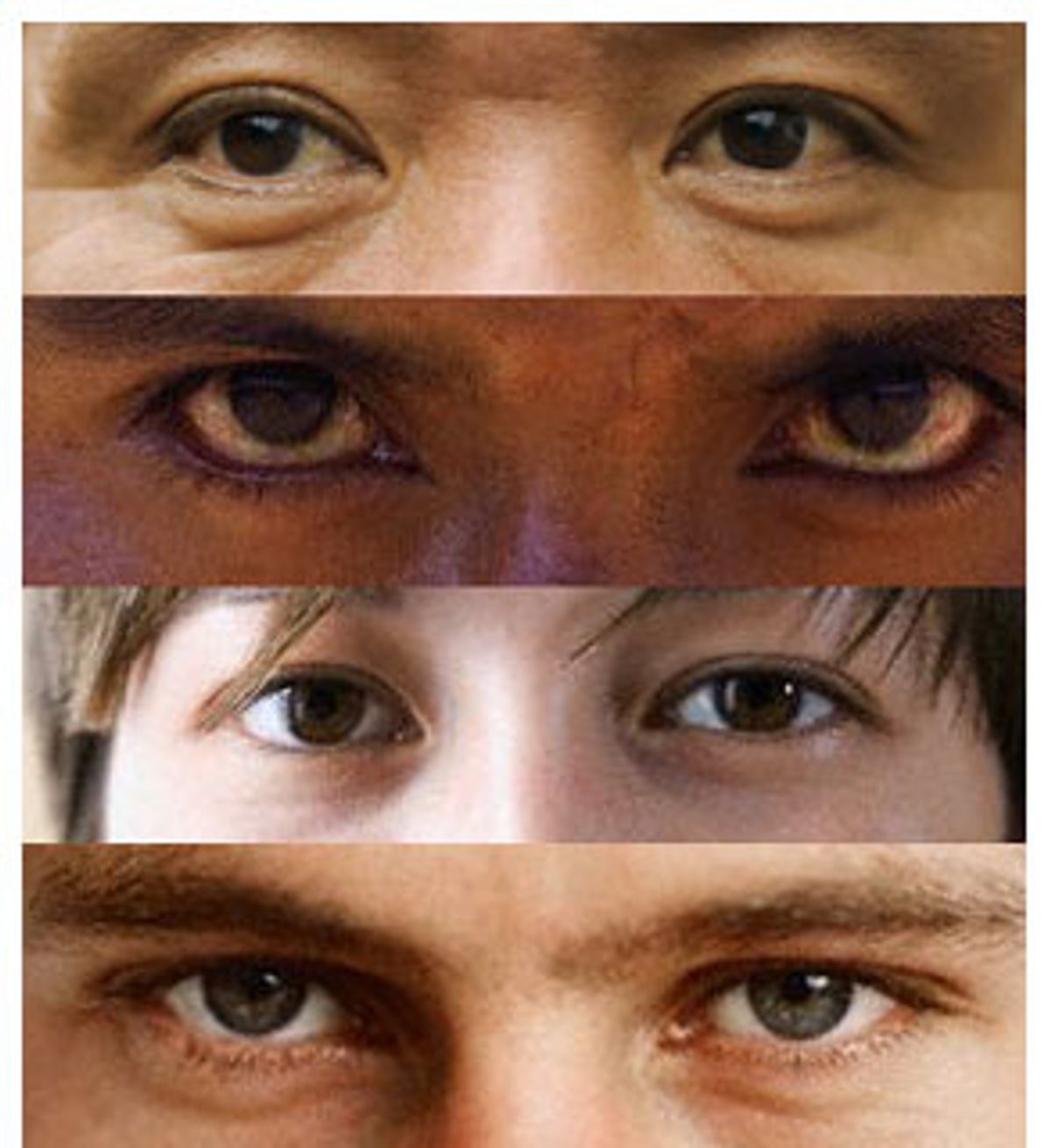 By anyone's standard, Anne-Marie Murphy didn't look like a terrorist threat. In 1986, Murphy was a 32-year-old hotel chambermaid from Dublin, Ireland, who was six months pregnant and on her way to marry her fiancé in Israel. Authorities discovered a bomb in her carry-on bag as she boarded a plane in London on her way to Tel Aviv.

Kozo Okamoto didn't fit the profile of a terrorist, either. In 1972, he and two other Japanese passengers had just arrived in Tel Aviv on a flight from Puerto Rico when they retrieved guns from their checked bags and opened fire in the arrival terminal at Ben Gurion International Airport, killing more than two dozen people and injuring nearly 80.

Nor did Patrick Arguello seem like a state enemy in 1970 before he tried to hijack an Israeli El Al plane flying from Amsterdam, Netherlands, to New York. Arguello, who was killed by Israeli sky marshals as he tried to carry out his attempt, was a Nicaraguan who had attended high school in Los Angeles.

Enemies, Israel has learned, don't always look like the known enemy. Terrorists, both willing and unwilling (such as Murphy, who was unwittingly used by her Palestinian fiancé as a carrier for his bomb), come in many guises, including color, ethnicity and gender.

Which is why racial profiling (in which authorities target people of certain races or ethnicities) has never worked very well in any environment, including Israel.

That racial profiling can be a tricky tactic is something Americans should understand by observing the diversity of some of the terrorists who have operated on domestic soil or against Americans -- Timothy McVeigh (the Oklahoma City bomber), Eric Rudolph (the abortion clinic bomber), Richard Reid (the ponytailed British-Jamaican who tried to bring down an American Airlines jet with his shoe) and the Arab hijackers who crashed into the World Trade Center's twin towers.

Yet last month, when Mayor Michael Bloomberg announced a program to randomly search New York subway passengers after the London tube bombings, two city politicians called for racial profiling instead. They insisted that the enemy's face is an easy one to spot and that authorities shouldn't waste time randomly searching, say, Norwegian grandmothers when the real threat comes from Middle Eastern and Asian men.

New York Assemblyman Dov Hikind, a Democrat, plans to introduce a bill that would roll back anti-racial-profiling legislation and allow police to stop whomever they want to stop in their efforts to prevent terrorism. Councilman James Oddo, a Staten Island Republican, promises to introduce a similar resolution in the City Council.

Although Bloomberg denounced the proposals immediately, Oddo says he got e-mails from more than 80 people outside New York who expressed overwhelming support for his proposal. They included a military major serving in Iraq and the relative of a victim killed in the Oklahoma City bombing. But many Manhattanites called him un-American and racist. And Oddo's fellow council members vowed to introduce their own resolution to express support for current laws that prohibit profiling based on race, ethnicity or religion.

Oddo, who voted for the anti-racial-profiling laws, says that he and Hikind aren't calling for racial profiling, a loaded term that conjures up disturbing images. They simply don't want police to fear that if they stop "an inordinate number of people who look a particular way," someone will accuse them of violating the individuals' rights.

"Racial profiling is when you stop people because they look a certain way, without cause, and you're trolling to find trouble," Oddo says. "We never said, 'Stop only Arab [or] Muslim men, and don't stop whites.' We just said, 'If you're going to engage in these searches, do it in a manner that's more efficient and more effective."

Being more effective, he explains, means recognizing that the bombings of the Marine barracks in Lebanon, the USS Cole in Yemen, and the World Trade Center in New York all had something in common. "The common denominator is that every jihadi who is engaged in international terrorism has been a young fundamentalist," Oddo says. "We shouldn't try to couch that reality in some politically correct terms."

Some people do consider racial profiling unethical, but there are plenty of other reasons to reject racial profiling, even aside from its violation of equal protection rights.

David Harris, professor of law and values at the University of Toledo College of Law in Ohio, says that focusing on specific ethnic groups alienates the very people authorities need to help them catch terrorists. "By the time the threat is at the subway or airport, we're down to the last line of defense," Harris says. "You really want to catch these people before they go to the subway."

That can be accomplished only by gathering information from people who live in the communities where sleeper cells reside and can tell authorities who's new in a neighborhood and who seems to have income without holding a job.

But the most important reason to oppose racial profiling, says Harris, the author of "Profiles in Injustice: Why Racial Profiling Cannot Work," is that, as the title of his book suggests, it simply doesn't work.

Harris says that when police use race or ethnic appearance as a factor in law enforcement, their accuracy in catching criminals decreases. Even worse, it can lead to accidental deaths, such as the fatal shooting by London police of an innocent Brazilian man after the bombings there.

Harris points to a study of New York's "stop and frisk" campaign in the late 1990s, when police were stopping people in the streets on a regular basis in an effort to confiscate illegal weapons and reduce crime. The campaign created tension between the police and minority communities, who thought they were being unfairly targeted for frisks. It turned out they were right.

Those findings interested Harris less than what the statistics indicated about the results: Police were going to a lot of trouble for little reward, especially when the people they stopped were African-Americans.

Harris looked at what he called "hit rates" -- the percentage of stops in which the police found drugs, a gun or something else that led to an arrest -- and noted that the number of hits in general was very low for the number of stops that police made. But more interesting was that the rate for African-Americans was much lower than the rate for Caucasians. Police had a hit rate of 12.6 percent when they stopped Caucasians and only 10.5 percent when they stopped African-Americans. The hit rate for Latinos was 11.5 percent.

"You might say that we have a difference of 2.1 percent between blacks and whites. But it's actually a difference of 20 percent when you do the math right," Harris says. And "the difference between whites and Latinos is about 10 percent."

Essentially, police were stopping more African-Americans than Caucasians but finding fewer criminals among the former. Why? Not because blacks commit proportionately fewer crimes than whites do (the data vary according to the type of crime and other factors) but because police were looking at the wrong factors when they stopped people, Harris says.

"They're focusing on appearance when they should be focusing on behavior," he says. "When they're not distracted by race, they're actually doing a more accurate job" of picking out the right people.

Focusing on appearance produces a lot of false positives. And "every time you introduce a false positive, you take resources away from your ability to focus on people who are really of interest -- those who are behaving suspiciously," Harris says. "If it's a question of finding a needle in a haystack ... don't put more hay on the top."

What does work in preventing terrorism, Harris says, is behavior profiling. "If you're going to catch people who mean to put bombs on your subway trains or in airplanes, you don't actually care [if they're] young Muslim men ... You care about [keeping] anyone from boarding the airplane who is going to behave like a terrorist."

Yuval Bezherano agrees. Bezherano is the executive vice president of New Age Security Solutions, a company that teaches people how to identify behaviors that indicate a person is concealing something and could be a security risk. The technique is called behavior pattern recognition and is modeled after methods used in Israel. NASS's president, Rafi Ron, is a former security chief at Ben Gurion Airport. The company has trained authorities at Boston's Logan International Airport as well as personnel at the Statue of Liberty. Recently the company trained about 100 employees of New York's subway and bus system.

The signs to watch for can be as obvious as someone acting nervous and sweating profusely on a cold day or as subtle as someone walking awkwardly in a way that indicates the person could be wearing a belt of explosives.

"It's always the unusual, the thing that doesn't fit," Bezherano says. "If you know your environment and what is usual for the environment, you know what to look for."

Depending on the situation, the next step might be to engage the person in a targeted conversation to determine whether he or she should be elevated to a higher level of risk or cleared from consideration.

It was this kind of screening that caught Anne-Marie Murphy, who initially raised interest among El Al's security staff because she was a pregnant woman traveling a long distance alone, something that Bezherano says is unusual behavior. She'd already cleared three security checkpoints at London's Heathrow Airport before an El Al "profiler" asked her where she'd be staying in Israel. Murphy's fiancé had warned her not to tell authorities about him because they would interrogate her if they knew she had an Arab boyfriend, so she told the profiler she'd be staying at the Hilton Hotel in Bethlehem. The profiler knew there were only two Hiltons and that neither was in Bethlehem. When authorities searched Murphy's bag, they discovered several pounds of plastic explosives concealed in a false bottom and a microchip detonator hidden in a pocket calculator.

Behavior profiling is much more effective than racial profiling, Bezherano says, because it's not unusual for terrorist groups to outsource their operations to individuals or groups who don't fit the expected racial or ethnic profile.

Patrick Arguello was a member of the Sandinista National Liberation Front when he posed as the husband of a woman who was an operative for the Popular Front for the Liberation of Palestine to help her hijack the El Al plane.

Kozo Okamoto was a member of the Japanese Red Army, which attacked Ben Gurion Airport; the group shared the Marxist ideologies of the PFLP.

Bezherano says there's no reason to believe that al-Qaida won't, or doesn't, farm out some of its tasks to other groups. "The philosophy of terrorist organizations is that the enemy of your enemy is your friend," Bezherano says. "Even though al-Qaida is very extreme, [its members] will collaborate with others as long it as it serves their cause."

If those working to prevent terrorist attacks on U.S. soil engage in racial or ethnic profiling, they're merely playing into terrorists' hands -- and are likely to miss some of the enemies right in front of their eyes.