The president is sticking to all his old riffs about the war on terror -- despite an American public now much more skeptical of the war in Iraq. 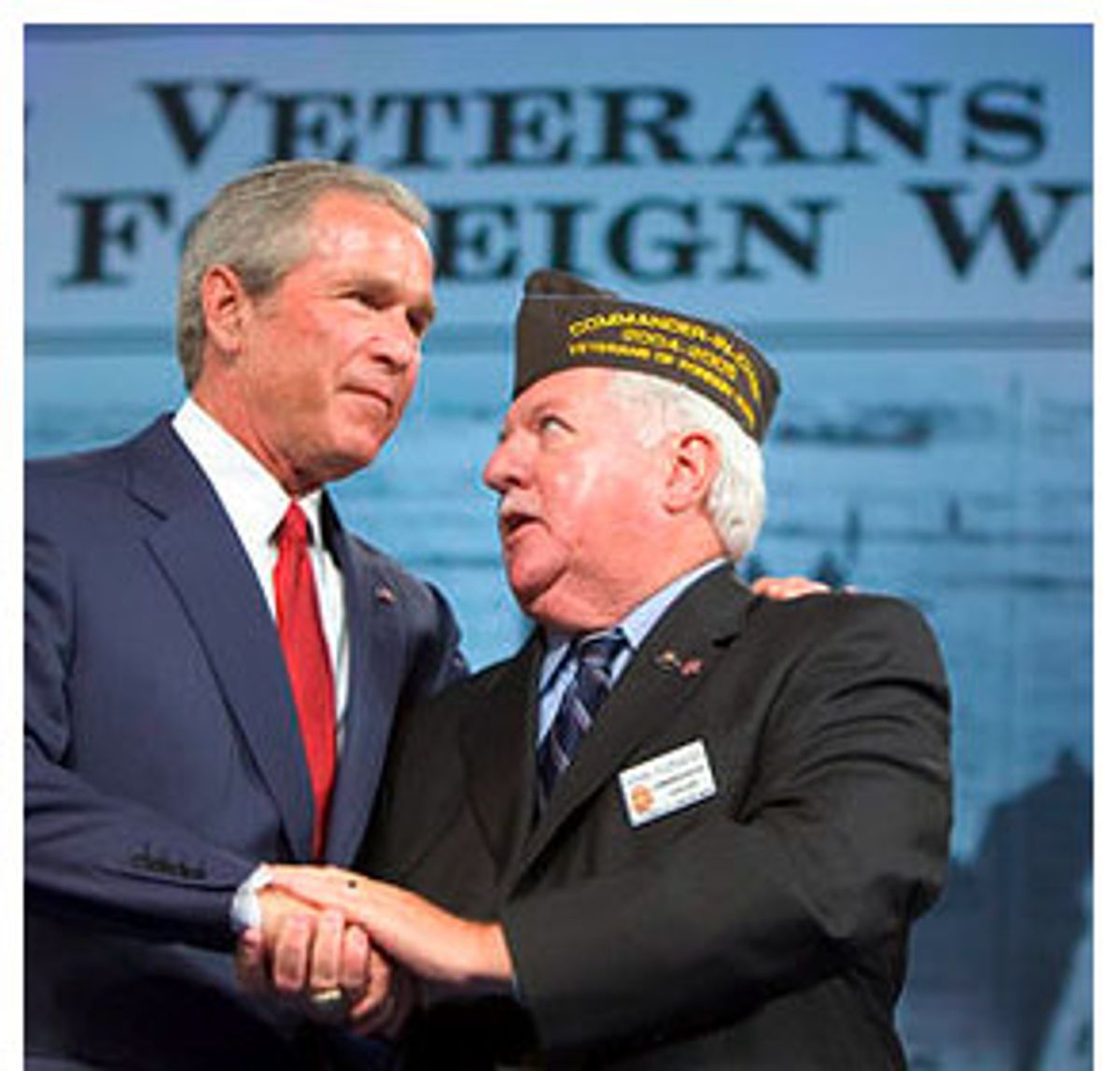 Cindy Sheehan does not appear to have fazed President Bush. His recent drop in the polls has not changed his rhetoric. But as he showed on Monday, his fidelity to a well-worn message -- a determination to succeed in Iraq at all costs -- now leaves him in danger of sounding sharply off key.

Before thousands at the Veterans of Foreign Wars convention in Salt Lake City, President Bush offered his first formal speech on Iraq since antiwar protestors, led by Sheehan, began to dominate the news by camping outside the president's Texas ranch. The president said nothing new of substance. In fact, he stuck so closely to year-old speeches that his words were as redundant as they were sculpted: "We know that freedom is the future of every nation," Bush said, "and that the side of freedom is the side of victory."

He appeared to dismiss wholesale the concern shared by a growing number of Americans that the U.S. is losing the war on terror, and suggested that the impulse to reconsider the Iraq war is a sign of weakness. "Once again, the American people have been steadfast and determined not to lose our nerve," Bush told an audience of thousands of veterans. "And once again we have had confidence in our cause."

Political observers say the gulf between the White House message and the reality on the ground in Iraq may be hurting the president, whose job approval ratings hover near record lows. "When he said that stuff a few years ago he was saying it at a time when most of the American people gave him the benefit of the doubt," said Ret. Army Col. Andrew Bacevich, a professor of international relations at Boston University. "Now he begins to sound stale. He begins to sound false."

Some Senate Democrats and Republicans, the latter previously hesitant to criticize the war directly, are moving to capitalize on this apparent gap. Over the weekend, Sen. Chuck Hagel, R-Neb., who is expected to run for president in 2008, compared the war in Iraq with Vietnam and said it has destabilized the Middle East. "We're not winning," he said. On Monday, Sen. Russ Feingold, D-Wis., who supports bringing U.S. troops back from Iraq at the end of 2006, blasted the president's speech as more of the "same sloganeering."

"The President failed to give the American people a realistic assessment of where we stand today," Feingold said in a statement.

Some experts suggest that a more nuanced approach, one that recognized the difficulties in Iraq, might yield some political benefits for the embattled administration. "The political message of the war has gone off track," says David Gergen, a Harvard professor who served as a White House advisor to Ronald Reagan, President Bush's father and Bill Clinton. "I think a full and frank acknowledgement of some of the problems would be helpful politically."

But no such acknowledgement came Monday. The president appeared relaxed, well-rested and jovial, dressed in a burgundy tie with an American flag lapel pin. He spent a third of his time at the podium praising the VFW, making self-effacing jokes, and detailing the money his administration has lavished on veterans' causes. Once he began speaking of the war, his speech quickly began to echo his past statements. He touched on all the key talking points of the war on terror, catchy phrases that have been repeated so many time they ring as familiar -- and wanting of specific meaning -- as the lyrics to a pop song: "We will accept nothing less than total victory ... Iraq is a central front in the war on terror ... This is a different kind of war ... We will go on the offense ... We're on the hunt."

A long-running White House strategy lies behind the message, one that casts opponents of the war as weak or cowardly or unpatriotic. In the last presidential election, the strategy was a clear success, undermining the candidacy of Sen. John Kerry, according to exit polls. Now, it may be leading the Bush administration and its supporters into a public-opinion quagmire. While last fall a majority of Americans thought the nation was winning the war on terror, today only 38 percent believe we are winning, according to pollster Scott Rasmussen.

Pointing to the prospect of an Iraqi constitution, and apparently optimistic that the war in Iraq will not worsen, the White House has decided to stay the same course. In a speech last week, Vice President Dick Cheney promised not to relent in the war on terror, comparing the current hardships to those faced by Gen. George Washington's troops during the Revolutionary War. "The struggle was to last eight years," Cheney said of the battle in 1776, noting that the soldiers did not abandon the cause in the face of hunger, exhaustion or lack of boots. "They stayed in the fight -- and America won the war." Cheney then quoted Gen. Washington as saying, "Perseverance and spirit have done wonders in all ages."

In the meantime, President Bush plans to travel to Idaho for two days of vacationing and mountain biking. On Wednesday, he will speak in Nampa, Idaho, about the war on terror before a National Guard group. There is little expectation that he'll announce any significant changes to his war policy, let alone say anything new.