"Magic for Beginners" by Kelly Link

Another entrancing collection of surreal suburban tales from the author of the underground hit "Stranger Things Happen." 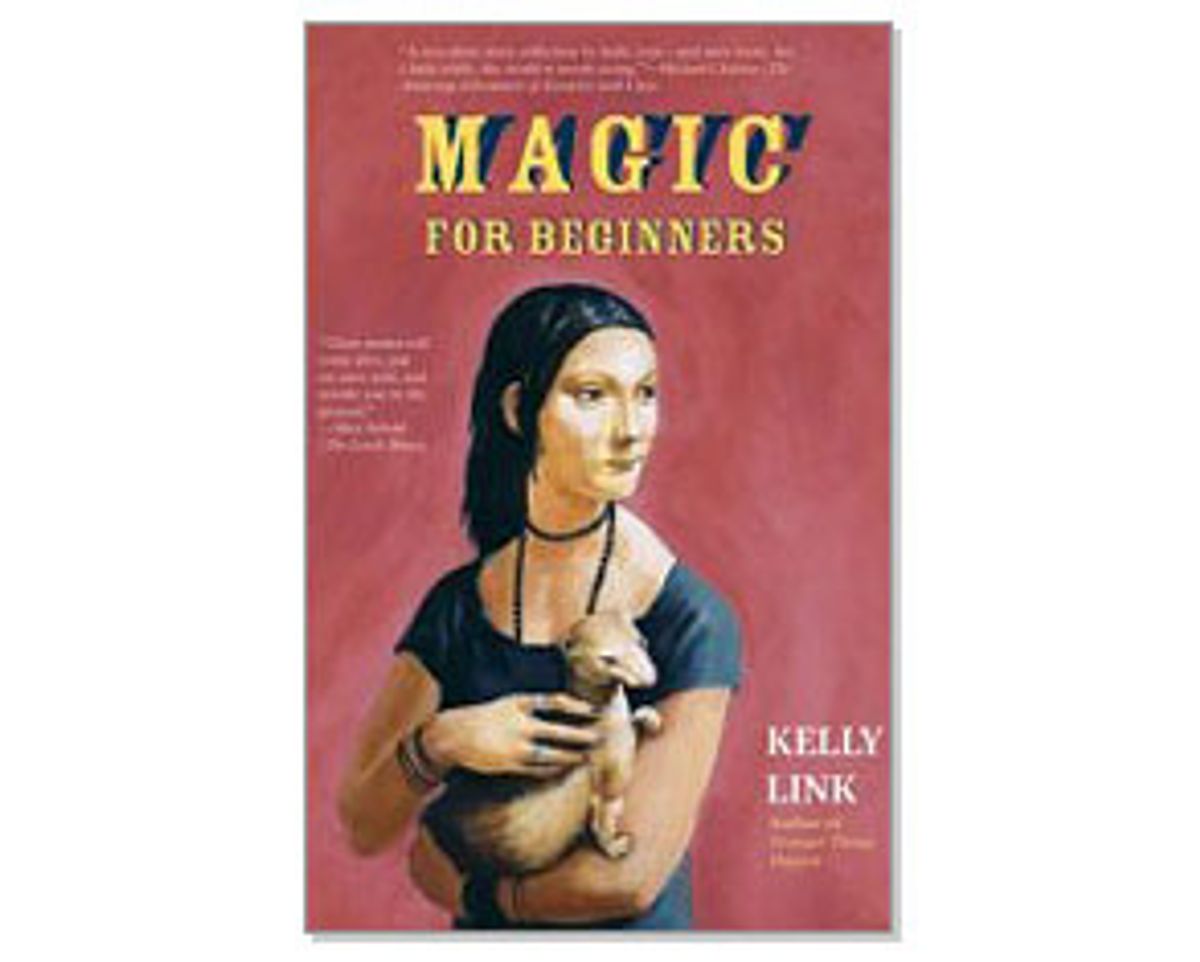 Even among cult writers, Kelly Link doesn't quite fit. She's still published by the small press she runs with her husband, but editors flock to her readings, famous writers reverently pass her books to each other, Michael Chabon has picked "Stone Animals" for this year's Best American Short Story anthology, and her new collection, "Magic for Beginners," was singled out as an editor's choice in Entertainment Weekly.

"Magic for Beginners" shows even more clearly than her entrancing debut collection, "Stranger Things Happen," how Link treads the near-invisible line between literary hit and writer's writer. Her prose is fresh and unaffected, yet honed to the essential. So far, she's produced only stories (though lately some have grown to novella length), works that delicately knit together crowd-pleasing genre and folk-tale elements with challenging experimentation. (This is essentially what the metafictionists of the 1970s professed to do; however, when Link does it, it works.) And always, the connective tissue is a funny, rueful view of human relations that for all the weird stuff going on, remains rooted in reality.

Take "The Hortlak," in "Magic for Beginners," which is like a Raymond Carver story on mescaline. Nineteen-year-old Eric works in the All-Night, a convenience store near the Canadian border, and pines for Charley, a woman whose work euthanizing dogs at an animal shelter has caused her to look "like someone had just set her favorite city on fire." This might sound like a standard setup for an exercise in kitchen-sink realism, but wait. Eric's fellow clerk, Batu, has taken over the neglected franchise and declared that the two of them are embarking on a mission that will "change the face of retail." This revolution entails such innovations as rearranging the candy "according to chewiness and meltiness," and then again so that the first letter of each candy spells out the first sentence in "To Kill a Mockingbird." Batu considers money passi; "I'm supposed to give you what you want," Eric tells a baffled customer, "and then you give me what you want to give me."

Perhaps this would seem eccentric if the All-Night didn't also stand hard by something called the Ausible Chasm, a seemingly bottomless gorge from which emerge mild-mannered zombies attempting in vain to shop: "The things the zombies tried to purchase were plainly things that they had brought with them into the store ... pieces of safety glass ... empty soda bottles, handfuls of leaves, sticky dirty, dirty sticks." Batu has the idea that the enigmatic zombies constitute a vast untapped market: "Once the All-Night figures out what dead people want to buy, it's going to be like the discovery of America all over again." Meanwhile, he encourages Eric's crush ("The All-Night needs women") but warns against getting in the car Charley uses to give the doomed dogs their last ride; it's full of ghosts, "the wrong kind of ghosts. The kind who are never going to understand the least little thing about meaningful transactions." And then there's Batu's collection of uncanny pajamas. (One customer, examining a pair, discovers that pages of her secret girlhood diary are printed on them.)

As peculiar and amusing as "The Hortlak" is, the story's emotional tones never drift far from what you might expect in the life of a lonely teenager working the night shift at a rural 7-Eleven. Eric is torn between Charley's angry pessimism and Batu's absurd, gung-ho sense of purpose. Hey, doesn't everyone buying milk at 4 a.m. act like the walking dead?

Most of the stories in "Magic for Beginners" wrestle with the difficulties of marriage and suburban family life, projects that can seem as surreal as Batu's retail revolution. In "Stone Animals," a family moves from New York to their dream house in the country, only to see their possessions become, one by one, "haunted" -- that is, strange and repellent to them. A host of vigilant rabbits collects on their lawn, the mother keeps painting and repainting the rooms and eventually they all are apparently digested and transformed by their surroundings -- not the suburb, but the natural landscape beneath it.

The least successful stories in this collection are too fractured and trippy to attain that quintessentially Linkian moment of transcendence, when the goings-on, however bizarre, cohere into a perfectly familiar state of mind. The title story, however, makes up for any number of misfires. It's about a group of teenage friends united by their devotion to a TV series called "The Library," a blend of "Buffy the Vampire Slayer," "The Hitchhiker's Guide to the Galaxy" and Mervyn Peake's Gormenghast trilogy, produced by persons unknown and airing at unscheduled times on random channels, usually "the ones that are just static." The five friends are "inseparable, invincible. They imagine that life will always be like this -- like a television show in eternal syndication -- that they will always have each other."

Trouble looms. The main character, Jeremy, has parents who have stopped talking to each other. He thinks Elizabeth likes him, but he thinks he likes Talis and his buddy Kurt has told him hands off Talis or else. From a long-lost great aunt he has inherited a telephone booth located just off a freeway exit in Las Vegas. The story is both a mournful rumination on the perfection and fragility of adolescent friendships, and a valentine to the kind of pop culture that's able to create community among misfits. (The whole story, by the way, is also another episode of "The Library.") It's impossible to think of another writer who could pull this off without sounding nostalgic or patronizing or excessively cerebral. There is, after all, only one Kelly Link.