"No Country for Old Men" by Cormac McCarthy

The lord of horses and cowboys follows a modern-day Texas manhunt -- and a botched drug deal -- in this hard-boiled cinematic thriller. 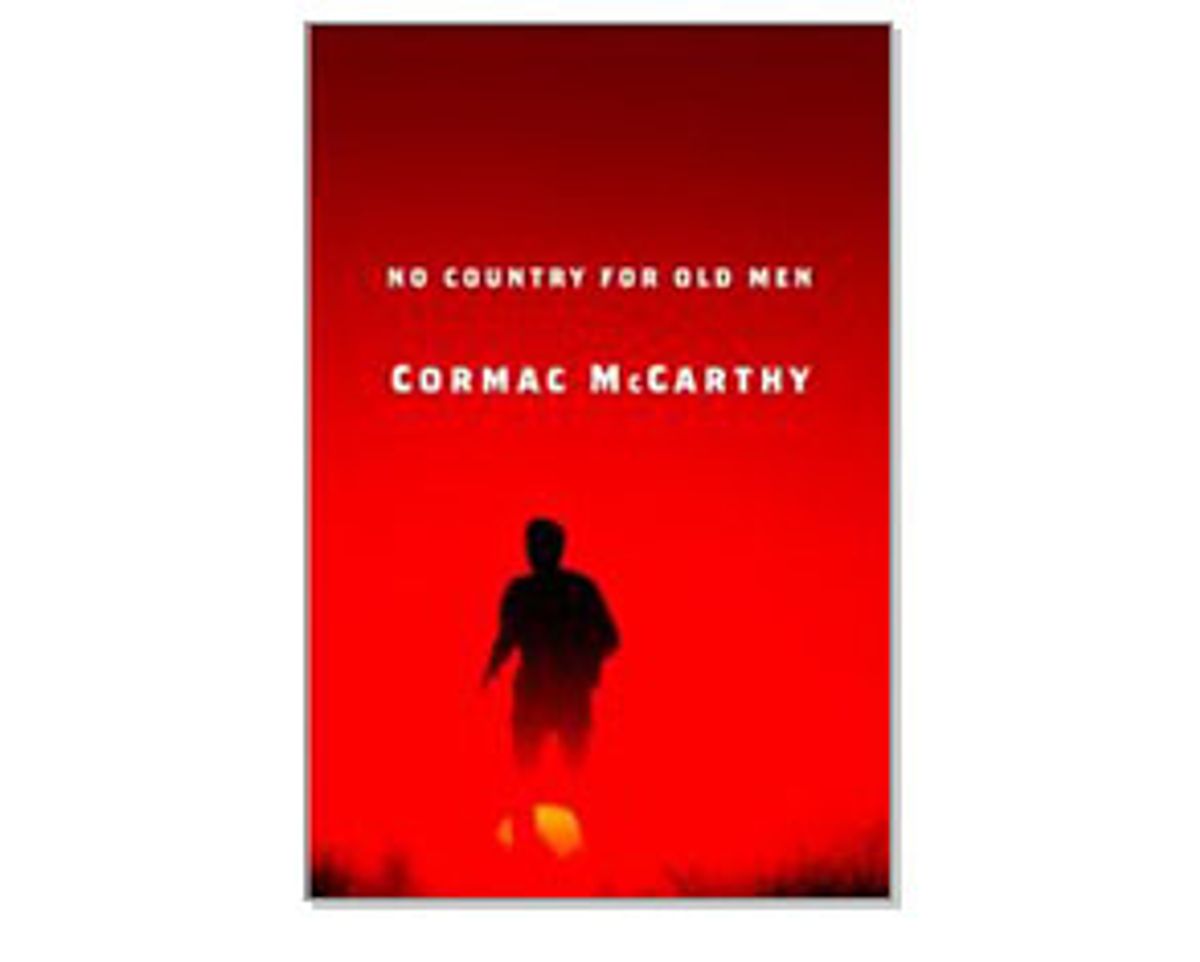 As a matter of fair warning, know the following about Cormac McCarthy's new novel "No Country for Old Men": Women exist mainly to show primordial attraction and inarticulate loyalty toward men; men are more at ease sawing off shotgun barrels or dressing their own bullet wounds than they are in the presence of women, children or their own emotions; any character you find yourself rooting for is likely to be murdered within a few pages; and the old sheriff who acts as the book's moral compass will complain, twice, about young people "with green hair and bones in their noses." But to be put off by McCarthy's crusty machismo would be to miss out on a taut thriller that not only holds, but also rewards, close attention.

Like several of McCarthy's previous novels, "No Country for Old Men" chronicles a series of violent deaths along the Texas-Mexico border. But this time the setting is 1980, and instead of horses and land the mayhem revolves around a leather case packed with $2 million in drug money. Llewelyn Moss, a welder hunting antelope near the Rio Grande, comes across the remains of a botched heroin deal -- shot up 4x4 trucks, Mexicans and the leather case. Moss carries the case away and becomes the object of competing manhunts. Among the hunters are Sheriff Bell, who shares a hometown with Moss and his wife, Carla Jean; Carson Wells, an ex-Special Forces officer hired by the case's original owner; and Anton Chigurh, a freelance killer who dispatches some of his victims with a pneumatic prod made for slaughtering cattle. At one point Chigurh forces Carla Jean to call a coin toss for her own life. Where it falls is in keeping with the general tilt of the plot.

For all his hard-earned reputation as a throwback, McCarthy is a thoroughly cinematic novelist, and never more so than in "No Country for Old Men." Here he sheds the bombast that weighs down some earlier works and leaves intact the precise description of movement and action for which he is justly famous. Here is Moss in a hotel room customizing a new gun:

He "unwrapped the shotgun and wedged it in an open drawer and held it and sawed the barrel off just in front of the magazine. He squared up the cut with the file and smoothed it and wiped out the muzzle of the barrel with a damp facecloth and set it aside."

Nothing extraordinary perhaps, but even Ashton Kutcher would know just what to do during filming. Later we see and hear Chigurh offing a man at the same hotel:

"Chigurh shot him three times so fast it sounded like one long gunshot and left most of the upper part of him spread across the headboard and the wall behind it. The shotgun made a strange deep chugging sound. Like someone coughing into a barrel."

(Not surprisingly, the movie rights to "No Country for Old Men" have already been sold. The job of adapting the screenplay should be the easiest money a writer ever made.)

But what's so special about meticulous descriptions of gunplay? What separates McCarthy from high-grade pulp? The short answer is that the violence is headed somewhere unexpected. In what is sure to make for an adrenalized movie scene, an encounter between Moss and Chigurh leads to a chaotic shootout through the streets of Eagle Pass. Buckshot rattles off of balustrades and shatters windows, cars skid sideways down Main Street in clouds of rubber smoke, and Moss eventually staggers away wounded. In a run-of-the-mill thriller, the scene would be revisited, if at all, in a quick mention of police tape and bloodstained sidewalks. In "No Country for Old Men," we get the hired hand, Carson Wells, inspecting the aftermath and discovering the victim of a stray bullet:

"A darkened room. Smell of rot. He stood until his eyes were accustomed to the dimness. A parlor. A pianola or small organ against the far wall. A chifforobe. A rockingchair by the window where an old woman sat slumped."

Wells snaps a couple of photographs of the corpse and, when he catches up with the convalescing Moss, presents them to him. The 10 pages of dialogue that follow are as pitch-perfect and riveting as any that have been put on paper. The scene ends this way: "When he was gone Moss turned up the photographs lying on the bed. Like a player checking his hole cards."

"There's no such thing as life without bloodshed," McCarthy said 13 years ago in a rare interview. And like his character Moss, McCarthy can't help peeking. The constant question underlying his fiction is how we are to live on in the face of this knowledge. At the end of "No Country for Old Men," in the last of his ruminations that punctuate the book, Sheriff Bell poses a version of this question as he ponders the unknown mason of an old water trough:

"That country had not had a time of peace of any length at all that I knew of ... But this man had set down with a hammer and chisel and carved out a stone water trough to last ten thousand years. Why was that?"

Bell's answer surely echoes McCarthy's own project as a writer:

"And I have to say that the only thing I can think is that there was some sort of promise in his heart. And I dont have no intentions of carving a stone water trough. But I would like to be able to make that kind of promise."