The indecency war is ready to heat up -- and Tony Soprano, Jon Stewart and the "South Park" kids better watch their mouths. 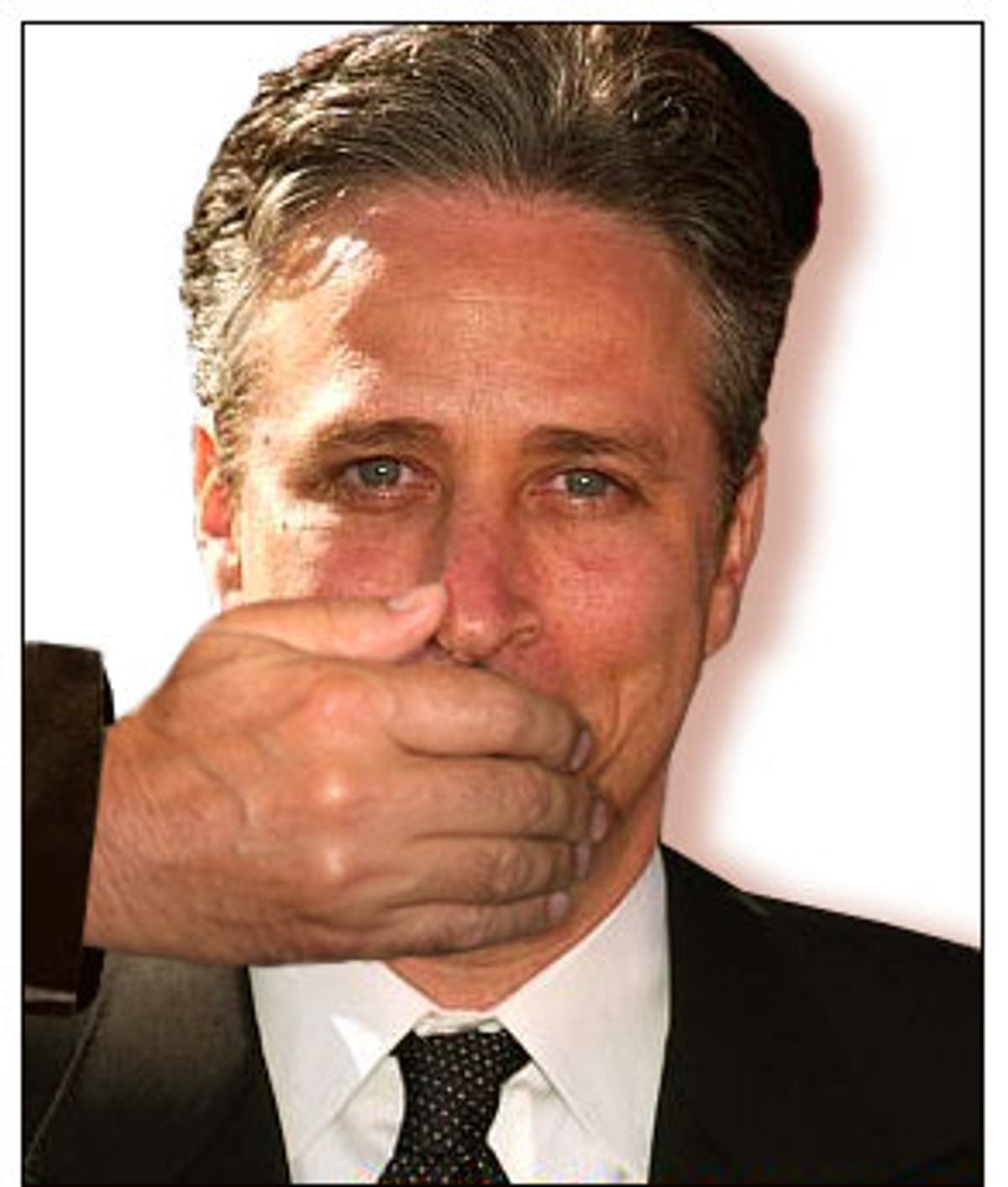 A 2003 episode of the short-lived Fox comedy "Keen Eddie" features a woman described as a "filthy slut" who is hired to "extract" semen from a prize thoroughbred. "That's not natural," the prostitute protests. "Think of it as science," says the man offering to pay. Though the episode featured no actual extraction -- off-camera the woman lifts her shirt and the horse suddenly drops dead -- some Americans complained, finding the scene inappropriate for prime-time television.

The Federal Communications Commission disagreed. In the majority opinion, the commission decided the sequence was not intended to "pander, shock, or titillate." The decision, however, was not unanimous. Commissioner Kevin J. Martin, whom President Bush has since appointed FCC chairman, thought Fox stations should be fined. "Despite my colleagues' assurance that there appeared to be a safe distance between the prostitute and the horse, I remain uncomfortable," Martin wrote at the time.

Though Martin lost the battle over horse extraction, he is now poised to win the broader indecency war. During the long hot summer in Washington, he has been quietly meeting with religious activists and industry leaders to organize a push for new standards for broadcast, cable and satellite television. At the same time, Martin's allies in the Senate have been considering new laws that could increase broadcast indecency fines, break up cable TV offerings to allow parents to cut off racy channels, and -- most controversially -- give the FCC the power to fine basic cable programs, like MTV's "Real World" and Comedy Central's "Daily Show," for crude and lewd content.

"On the surface, it may look like ... we are in a holding pattern," a Senate Commerce Committee staffer tells Salon. "But there have been lots of meetings on a staff level as well as meetings with interest groups and with industry."

Privately, industry leaders are quaking in their Prada loafers. The water cooler may no longer buzz over Janet Jackson's Super Bowl halftime teat or Bono's expletive-laden Golden Globe speech, but executives still see the coming fight to sanitize television of the crude, the pixelated and the bleepable as an assault on their bottom line. "Everybody should be frightened by the notion that this process could be hijacked by a very few people," says Jim Dyke, a Republican who now leads TV Watch, a group founded by Viacom (CBS, MTV, Comedy Central), General Electric (NBC, Bravo) and News Corp. (Fox) to argue against new regulation. "They are trying to make decisions about what our children can see."

In the coming weeks, observers expect Martin to act upon between 30 and 50 outstanding indecency complaints, the first step in clearing a backlog of hundreds of allegedly inappropriate broadcasts on television and radio. He has promised to remake the indecency process, speeding FCC responses and establishing a clearer precedent of what constitutes indecent programming. "The fact that we have not had any fines this year really just means we are in the eye of the hurricane," says one former FCC official, who has been following the situation. The storm first hit in 2004, when the FCC, under then-chairman Michael Powell, proposed $3.7 million in fines, more than twice as much as all the fines issued in the previous decade.

In the meantime, Martin, a former White House aide to President Bush, has been meeting privately with evangelical activists to assure them of his commitment to change the television landscape. The government does not regulate shows distributed over cable or satellite television for indecency. Similarly, there are no indecency limits on the content of satellite radio, where shock-jock Howard Stern sought refuge and will begin broadcasting next year. But in one session this summer, Martin told activists that he is privately reaching out to industry leaders to address racy content on basic cable and satellite television, says Rick Schatz, the president of the National Coalition for the Protection of Children and Families, a Christian ministry. "He said the free rein of cable and satellite and satellite radio is not acceptable," says Schatz, who sat in on the meeting. "He's committed to seeing something is done during his tenure."

Martin has asked media companies to offer a new "family-friendly" tier of cable programming, a package that would likely exclude channels like MTV and Spike TV. "If cable and satellite operators continue to refuse to offer parents more tools, basic indecency and profanity restrictions may be a viable alternative," he said during a House hearing in February 2004. New government restrictions would require an act of Congress.

But Martin seems to have found an ally in the Senate, where Ted Stevens, R-Alaska, recently became the chairman of the Commerce Committee. "We put restrictions on over-the-air signals," Stevens said of network broadcasts in March. "I think we can put restrictions on cable itself." His staff has been reviewing new regulatory options, looking for ideas that would survive a court challenge on First Amendment grounds. Though no schedule has been put forward, several people following the issue expect to see hearings scheduled later this fall.

Worried about the bottom line, the cable and satellite industry has responded by launching a campaign to educate parents about available technology, like the V-Chip, that can block certain channels from any single television. The campaign has been opposed by a powerful coterie of family advocacy groups and activists with close ties to major evangelical ministries and the Bush White House. "It will be war," says Schatz, of the coming battle over cable and satellite regulation. "There will be tremendous grass-roots pressure brought to bear."

This summer, Martin hired one of the activists, Penny Nance, to work in the FCC's Office of Strategic Planning and Policy Analysis, a position that will allow her to advise on indecency issues. Nance founded the Kids First Coalition, a group that fights abortion, cloning and indecency in the name of "pro-child, pro-family public policy." She has long been one of the nation's leading anti-pornography crusaders, testifying repeatedly before Congress. During the last presidential campaign, she appeared on Fox News as a "suburban stay-at-home mom" to say that women believe President Bush will "protect our children."

Nance, who did not return calls from Salon, has been invited to speak to a closed-door strategy meeting of anti-indecency groups that will be hosted by Concerned Women for America on Sept. 13 in Washington. The meeting is being organized by Phil Burress, the president of Citizens for Community Values, a group tied to Dr. James Dobson's Focus on the Family. Among other items, the group plans to discuss state or federal legislation that would redefine as obscene any close-up shots of vaginal intercourse or oral sex. If passed, and upheld by the courts, Burress said he hopes the new laws, which have not yet been introduced, will outlaw much of mainstream pornography, including programs delivered over pay-per-view cable and satellite networks. "I disconnected my cable," Burress said. "It got so bad that you couldn't even watch a football game."

Many of the future indecency debates at the FCC are likely to focus on whether racy shows, like the horse episode of "Keen Eddie," are indecent, even if they don't show nudity or include dirty words. In February, for instance, the Parents Television Council complained to the FCC about the CBS crime hit "C.S.I." One episode featured an adult murder victim who played out his sexual fantasies by dressing in diapers and suckling a prostitute. In one scene, the murder victim receives an enema laced with LSD and begins to play with his own feces. Then the prostitute encourages him to jump off a balcony. He later dies, apparently, by choking on his own blood.

Under the current rules, material is indecent if it is "offensive as measured by contemporary community standards." But standards vary widely from community to community, household to household. Family Research Council legal director Patrick A. Trueman said he recently traveled to a Marriott Hotel in Houston, where he said three separate cable stations -- not pay-per-view stations -- were showing "hardcore pornography," which he described as "sex acts." He demanded that the hotel staff come disable the channels. The staff told him one of the stations was Showtime. "I don't have cable just for this reason," said Trueman, who previously worked on obscenity cases in the Justice Department. "If I had cable, I would not want my children viewing that."

If the activists have their way, Trueman's children will not be the only Americans barred from watching sex -- explicit or implied -- on television. For now, they have the political winds at their backs, and a sympathetic captain at the helm of the FCC. Before taking his current job, Martin served as a lawyer for the Bush-Cheney 2000 campaign and later as a White House aide. His wife, Catherine J. Martin, worked for Vice President Cheney until recently, when she took another job in the White House to work for the president on policy and planning issues.

There is little doubt that Martin knows the political stakes of the coming fight. In 2003, he shared his concerns over indecency in a letter to the Parents Television Council, a group that has called for a boycott of shows like the WB's "Everwood" because it features adults who encourage teenage characters to use birth control and, in one case, have an abortion. "Certainly broadcasters and cable operators have significant First Amendment rights, but these rights are not without boundaries," Martin wrote to the group. "They are limited by law. They also should be limited by good taste."