"No one can say they didn't see it coming"

In 2001, FEMA warned that a hurricane striking New Orleans was one of the three most likely disasters in the U.S. But the Bush administration cut New Orleans flood control funding by 44 percent to pay for the Iraq war. 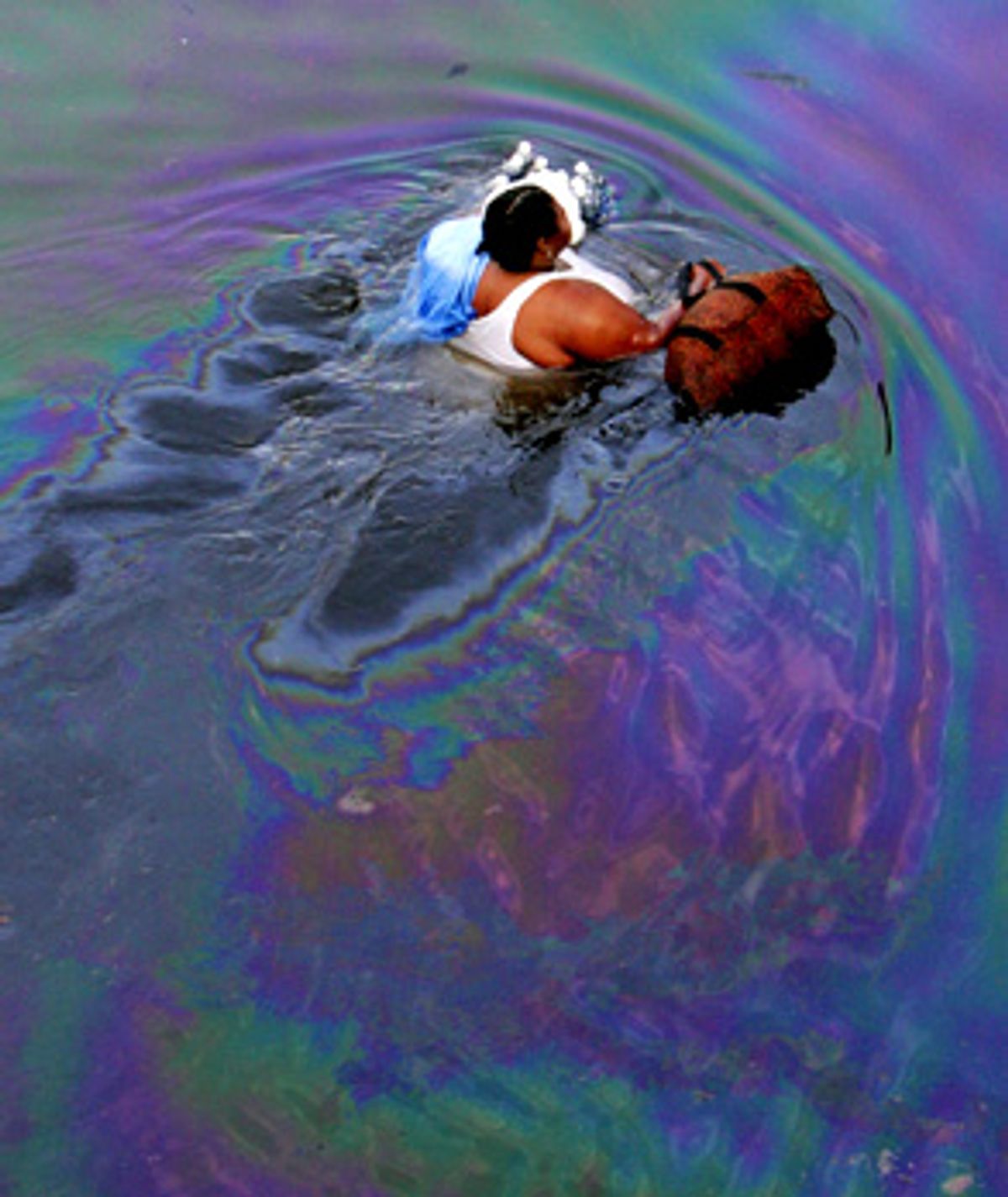 Biblical in its uncontrolled rage and scope, Hurricane Katrina has left millions of Americans to scavenge for food and shelter and hundreds to thousands reportedly dead. With its main levee broken, the evacuated city of New Orleans has become part of the Gulf of Mexico. But the damage wrought by the hurricane may not entirely be the result of an act of nature.

A year ago the U.S. Army Corps of Engineers proposed to study how New Orleans could be protected from a catastrophic hurricane, but the Bush administration ordered that the research not be undertaken. After a flood killed six people in 1995, Congress created the Southeast Louisiana Urban Flood Control Project, in which the Corps of Engineers strengthened and renovated levees and pumping stations. In early 2001, the Federal Emergency Management Agency issued a report stating that a hurricane striking New Orleans was one of the three most likely disasters in the U.S., including a terrorist attack on New York City. But by 2003 the federal funding for the flood control project essentially dried up as it was drained into the Iraq war. In 2004, the Bush administration cut funding requested by the New Orleans district of the U.S. Army Corps of Engineers for holding back the waters of Lake Pontchartrain by more than 80 percent. Additional cuts at the beginning of this year (for a total reduction in funding of 44.2 percent since 2001) forced the New Orleans district of the Corps to impose a hiring freeze. The Senate had debated adding funds for fixing New Orleans' levees, but it was too late.

The New Orleans Times-Picayune, which before the hurricane published a series on the federal funding problem, and whose presses are now underwater, reported online: "No one can say they didn't see it coming ... Now in the wake of one of the worst storms ever, serious questions are being asked about the lack of preparation."

The Bush administration's policy of turning over wetlands to developers almost certainly also contributed to the heightened level of the storm surge. In 1990, a federal task force began restoring lost wetlands surrounding New Orleans. Every two miles of wetland between the Crescent City and the Gulf reduces a surge by half a foot. Bush had promised "no net loss" of wetlands, a policy launched by his father's administration and bolstered by President Clinton. But he reversed his approach in 2003, unleashing the developers. The Army Corps of Engineers and the Environmental Protection Agency then announced they could no longer protect wetlands unless they were somehow related to interstate commerce.

In response to this potential crisis, four leading environmental groups conducted a joint expert study, concluding in 2004 that without wetlands protection New Orleans could be devastated by an ordinary, much less a Category 4 or 5, hurricane. "There's no way to describe how mindless a policy that is when it comes to wetlands protection," said one of the report's authors. The chairman of the White House's Council on Environmental Quality dismissed the study as "highly questionable," and boasted, "Everybody loves what we're doing."

"My administration's climate change policy will be science based," President Bush declared in June 2001. But in 2002, when the Environmental Protection Agency submitted a study on global warming to the United Nations reflecting its expert research, Bush derided it as "a report put out by a bureaucracy," and excised the climate change assessment from the agency's annual report. The next year, when the EPA issued its first comprehensive "Report on the Environment," stating, "Climate change has global consequences for human health and the environment," the White House simply demanded removal of the line and all similar conclusions. At the G-8 meeting in Scotland this year, Bush successfully stymied any common action on global warming. Scientists, meanwhile, have continued to accumulate impressive data on the rising temperature of the oceans, which has produced more severe hurricanes.

In February 2004, 60 of the nation's leading scientists, including 20 Nobel laureates, warned in a statement, "Restoring Scientific Integrity in Policymaking": "Successful application of science has played a large part in the policies that have made the United States of America the world's most powerful nation and its citizens increasingly prosperous and healthy ... Indeed, this principle has long been adhered to by presidents and administrations of both parties in forming and implementing policies. The administration of George W. Bush has, however, disregarded this principle ... The distortion of scientific knowledge for partisan political ends must cease." Bush completely ignored this statement.

In the two weeks preceding the storm in the Gulf, the trumping of science by ideology and expertise by special interests accelerated. The Federal Drug Administration announced that it was postponing sale of the morning-after contraceptive pill, despite overwhelming scientific evidence of its safety and its approval by the FDA's scientific advisory board. The United Nations special envoy for HIV/AIDS in Africa accused the Bush administration of responsibility for a condom shortage in Uganda -- the result of the administration's evangelical Christian agenda of "abstinence." When the chief of the Bureau of Justice Statistics in the Justice Department was ordered by the White House to delete its study that African-Americans and other minorities are subject to racial profiling in police traffic stops and he refused to buckle under, he was forced out of his job. When the Army Corps of Engineers' chief contracting oversight analyst objected to a $7 billion no-bid contract awarded for work in Iraq to Halliburton (the firm at which Vice President Cheney was formerly CEO), she was demoted despite her superior professional ratings. At the National Park Service, a former Cheney aide, a political appointee lacking professional background, drew up a plan to overturn past environmental practices and prohibit any mention of evolution while allowing sale of religious materials through the Park Service.

On the day the levees burst in New Orleans, Bush delivered a speech in California comparing the Iraq war to World War II and himself to Franklin D. Roosevelt: "And he knew that the best way to bring peace and stability to the region was by bringing freedom to Japan." Bush had boarded his very own "Streetcar Named Desire."