Sneaking past the police lines, we find a surreal scene where tourists are sleeping on bridges, restauranteurs are eating high on the hog, and looters lurk on every corner. 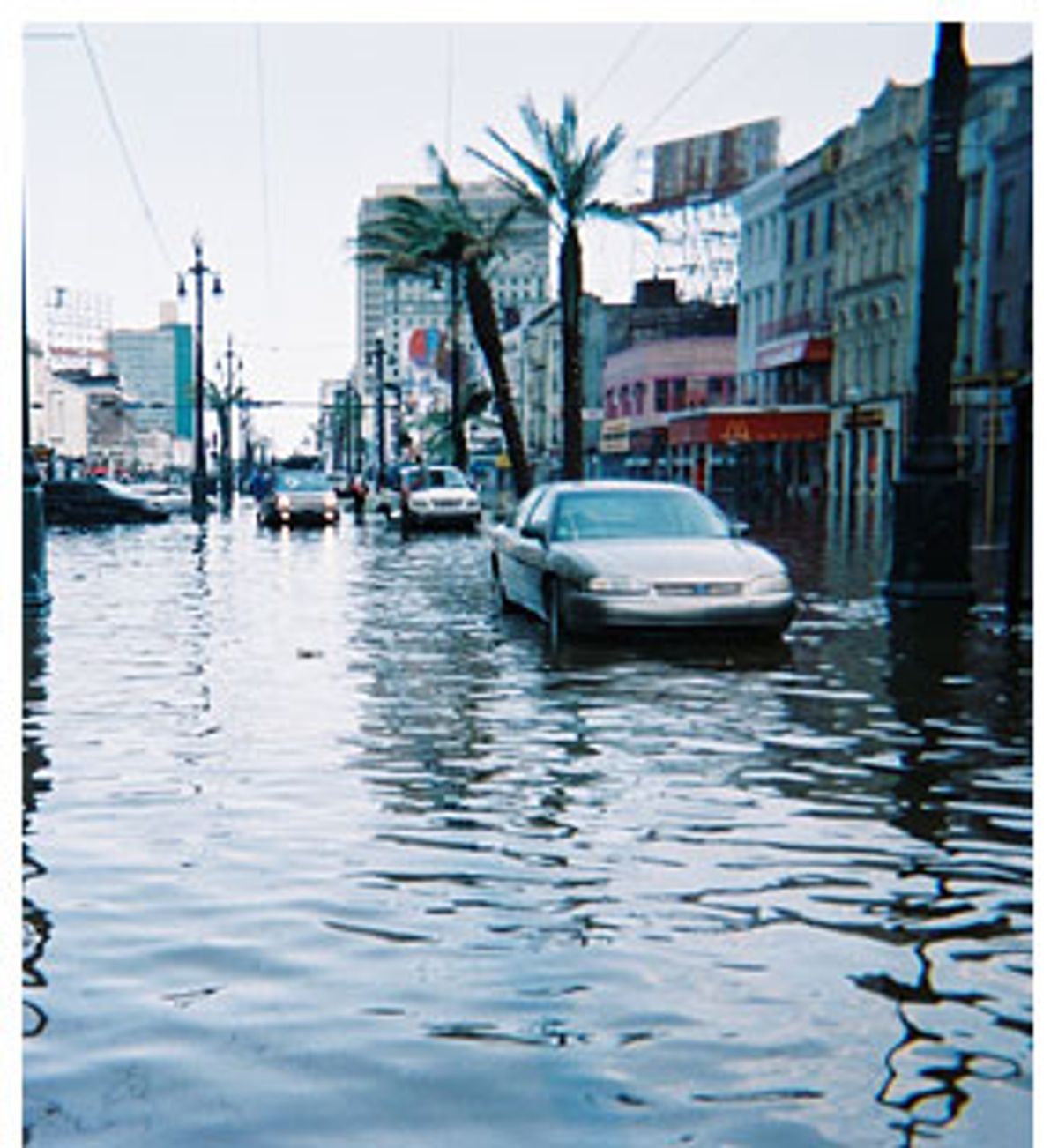 Nineteen miles west of New Orleans, near the LaPlace exit on Interstate 10, there's a roadblock where harried police officials check vehicles and press credentials. We tell an officer we're with the press, although we don't have an official badge. "You'll be in the way," he responds, and turns us back. But we manage to enter the city by state Highway 90, slipping into the cracks of a porous rescue operation.

Passing over flooded thoroughfares, Highway 90 cuts through the suburban community of Metairie. Dodging windfallen corrugated roofing and downed telephone poles, we pass a man determinedly mowing his lawn, and drive by an evacuated hospital, where bewildered people still wearing backless patient tunics wade through flooded streets. A plainclothes detective gives us a hint as to how to proceed downtown, and we ford a street under 3 feet of swamp water.

Along River Road, which runs along the Mississippi, things dry out. Although tree limbs are scattered about, we almost believe that it's not quite as bad as it seems. As we drive through the stately Uptown section of New Orleans, it appears that there is no one around at all. Finally, we come upon a lone pedestrian carrying a garbage bag on his back. He angrily yells at us for a ride, but we don't stop.

On a peaceful, dry side street, an elderly woman is holding court on her front porch while her family mills about on the street. Rose Jerrell, 65, has weathered the storm with her three children and several grandchildren. Now that the weather has blown over, they're sitting on the porch eating corn on the cob and listening to the radio. They're not planning on leaving, no matter how long it will be until services are restored. "We're just fine here," she says. "We don't run from hurricanes. You guys going sightseeing?" she asks us with a grin as we head toward downtown.

The only accessible roads into the city that have not been flooded are in a narrow stretch running along the Mississippi levee, which forms the highest point of land in the area. The Mississippi levee that protects the French Quarter and Magazine Street district from the river is a large earthworks structure, and one of the first levees built in New Orleans. Throughout Katrina, the levee kept the river from overflowing and joining the waters of Lake Pontchartrain coming in from the north side of town. The newer, heavy-duty steel canal floodgates broke under the strain of the battering storm surge.

Surrounding this slice of passable streets are scenes of grim destruction. Smoldering ruins, twisted pieces of corrugated metal, hundreds of downed and uprooted live oak trees litter the streets. On the outskirts of downtown, clusters of shellshocked survivors wander down empty thoroughfares, pushing what's left of their belongings in shopping carts and strollers.

"I don't really know where I'm going," says Kendall, a woman from the Ninth Ward neighborhood, who declines to give her last name. "Wherever they take me, I'm going. Anywhere with electricity. At the Ninth Ward, the water is 20 feet. The water ain't draining. We have got to start all over." She rejoins a long, aimless caravan of New Orleanians from the eastern side of the city, who are congregating in the business district.

The Ninth Ward is one of the most flood-devastated neighborhoods. Lying to the east of the French Quarter, the Ninth Ward, which is predominantly African-American, is one of the poorest parts of New Orleans, and was also the area that sustained the most damage from Hurricane Betsy in 1965, in which 200 residents died.

On our way into the city, most of the media appeared to be gathering on the expressway, waiting for the evacuation to begin before rolling camera. Inside the city, where contaminated floodwater is beginning to stink in the midday sun, a few camera crews remain. The CNN crew stands in the middle of Canal Street, downtown New Orleans' main thoroughfare, bargaining to buy a truck from a soon-to-be evacuee. "How much gas does it have in it?" asks a producer. "Will you throw in the canoe? Can we siphon some gas off another vehicle?"

On Wednesday afternoon, helicopters begin lifting evacuees from shelters to a designated stretch of I-10, where dozens of school buses wait to take people west toward Houston. National Guard military trucks packed with people barrel out of town toward the makeshift transport hub, but tens of thousands of people remain stranded in downtown New Orleans, without any idea of where to go, or how to get there.

Rescue efforts did not begin in earnest until late Wednesday afternoon, although the worst of the storm passed mid-morning on Monday. Initially, Coast Guard helicopters transported a few stranded flood victims to storm shelters around the city, while camera crews beamed the images of rooftop rescues. Mayor Ray Nagin had warned before the storm that shelters would be places of "last resort," and in stifling heat that reached 95 degrees, with no running water or electricity, they became chaotic scenes of desperation.

We talk to a few of the thousands of people for whom no shelter was provided. Tourists have been some of the unlucky ones. "We were kicked out of our hotel several days ago; we were thrown out onto the street with no food or supplies or anything," says Betty Ellanson, a 60-ish woman from Sumter County, Ga. "We're on our own. We've been told that by law enforcement and the National Guard." Ellanson is camping out, sleeping on a cement pedestrian bridge that runs between the convention center and the Riverwalk shopping mall with a makeshift clan of 50 other tourists, who had been expelled from the same hotel for "liability reasons." They have been scavenging the streets for food and water, hoarding peanuts and soft drinks among their Samsonites.

Lacking any reliable source of information about how to proceed, residents from the flooded eastern parts of the city and stranded visitors wander westward in a state of desperation. People shout at cars, pleading for rides to anywhere, and ask each other where they're headed. Several thousand residents forced from their homes line Convention Center Avenue, where rumor has it evacuations were set to begin. National Guard personnel say they had no immediate plans to begin evacuations from that location.

While chatting with some of the National Guardsmen, another guardsman approaches and informs us that a woman is in the middle of a stroke around the corner. The guardsmen shrug. There is no emergency medical tent in the downtown area, and many people in need of medicine have no way of getting what they need, even inside the shelters. On our way into the French Quarter, a wild-eyed man flags down our car, begging us for insulin or information about where some can be found. We cannot help him.

In contrast, some residents of the French Quarter appear comfortable, well-fed and relaxed. About 150 New Orleans police officers have commandeered the Royal Omni Hotel, part of the international luxury chain of Omni hotels that is housed in an elegant 19th century building, complete with crystal chandeliers and a rooftop pool. "All of the officers that are here, I can tell you in a classical sense, are gladiators," says Capt. Kevin Anderson, commander of the Eighth District of the NOPD (French Quarter). "To be able to put your family's concerns aside to protect the citizens of New Orleans, it's just an awesome job," he says.

Across the street from the Royal Omni at the Eighth District police department, several police officers keep a wary eye on the street with shotguns at the ready, while some fellow officers grill sausage links over charcoal barbecues. They are under strict orders not to communicate with the media. Capt. Anderson does confirm, however, that locations where officers were housed came under gunfire on Tuesday night. No officers were injured. "It is a very dangerous situation that we're in," Anderson says.

Apart from rescue operations, the police department patrols for looters, who have ransacked stores in virtually every part of the city. Looters are visible on every street corner. Every kind of business, from rundown corner markets to the Gucci storefront on South Peters Street, has been looted.

We walk half a block down Royal Street from the Eighth District headquarters and come upon Brennan's Restaurant, one of New Orleans' most venerable dining institutions. The Brennans are a high-profile family of restaurateurs and run several of the highest-end eateries in town. Jimmy Brennan and a crew of his relatives are holing up in the restaurant along with the chef, Lazone Randolph. They are sleeping on air mattresses, drinking Cheval Blanc, and feasting on the restaurant's reserves of haute Creole food.

The atmosphere in the French Quarter, while relatively quiet, is decidedly tense, but Brennan isn't worried. "We're not too concerned. The police let us go over to the Royal Omni, to take a shower, freshen up, and we cooked them some prime rib. We take care of them, they take care of us," says Randolph. Two Brennan emissaries whisk past, bearing multilayer chocolate cakes, headed toward the precinct. "This has been working out real well for us," says Jimmy Brennan.

Contrary to many reports, the French Quarter remains undamaged by flooding. The streets are dry and damage to the 18th and 19th century buildings appears to be minimal. Heavily pierced French Quarter denizens are emerging slowly, almost groggily, and some are looking to evacuate. One woman, wearing a black lace slip and fanning herself with a souvenir fan from a production of "Les Miserables," makes her way toward the Superdome, carrying no luggage.

"The Quarter always survives!" declares Finnis, the owner of Alex Patout's restaurant on St. Louis Street, who declined to give his last name. Standing in front of his restaurant, he sips champagne with several friends, insisting that his restaurant's gradually warming walk-in fridges will provide them with sustenance for up to a month.

Indeed, food doesn't seem to concern those who intend to stay through the rebuilding process. Back Uptown, Jerrell and her sons will avail themselves of the local A&P, which has long since had its doors broken off. It will be a long time before it reopens, and until then its shelves will be a lifeline for many.

While the water appears to have ceased rising since Tuesday night, the French Quarter is hemmed in by water on three sides. Four blocks away from the Eighth District headquarters and Brennan's restaurant lie mile-long stretches of the stinking floodwaters of Lake Pontchartrain.

Back on Canal Street, no one seems to be going anywhere. Despite the city having shut off the water supply in an attempt to force evacuation, many New Orleans citizens don't seem intent upon leaving. Others, who wish to leave, are in the dark as to how. With authorities saying that services may not be restored for one to two months, the question of what will become of these thousands of New Orleanians remains the most unresolved issue in Katrina's aftermath.

As the afternoon begins to wane, we hasten to leave the downtown area. Nighttime is pitch-black in New Orleans now, and martial law has not succeeded in quelling the sense that total anarchy is just a few more hot days away.