Bloggers are outraged over the different captions on photos of blacks and whites in New Orleans. 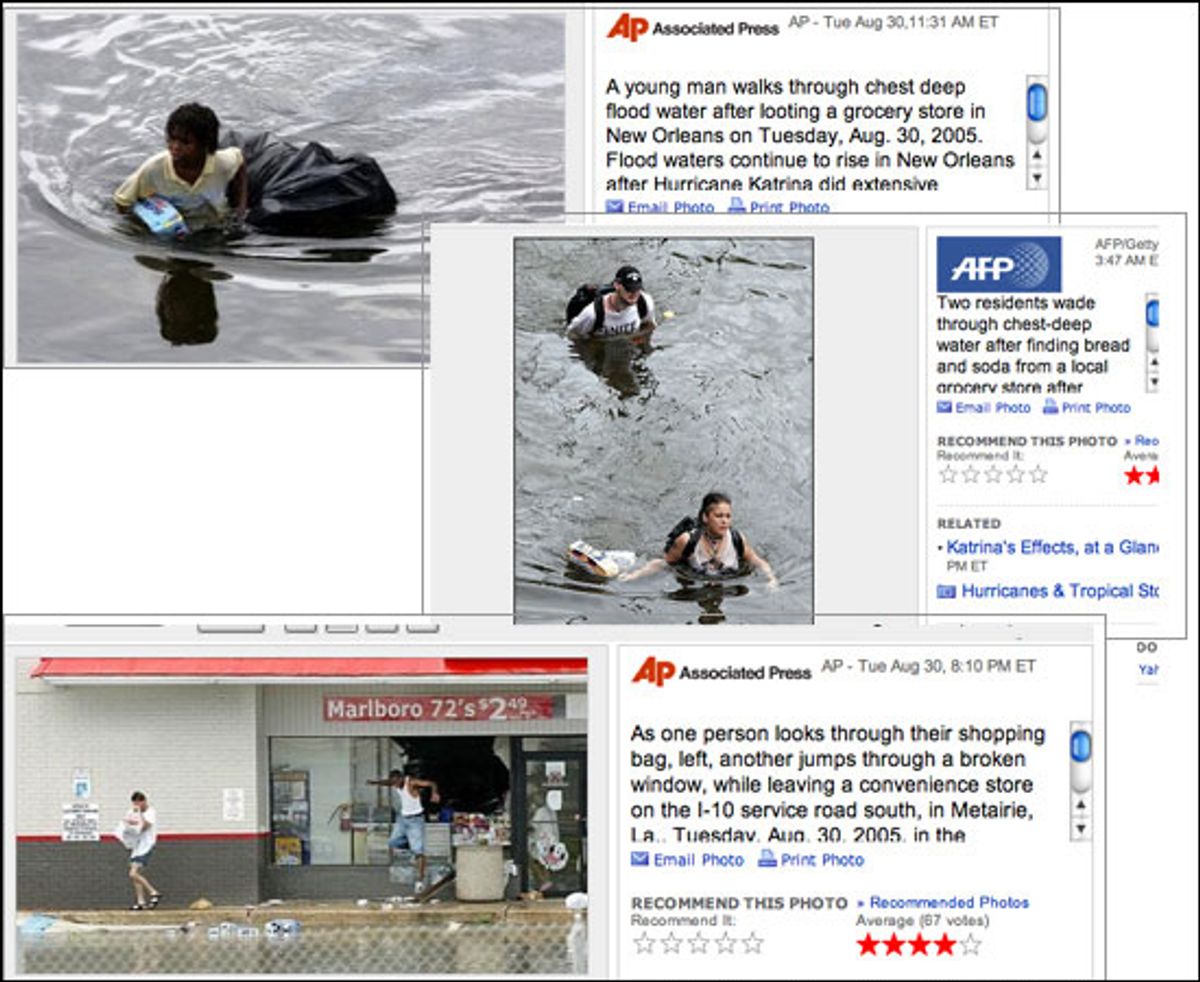 Two photographs of New Orleans residents wading through chest-deep water unleashed a wave of chatter among bloggers Wednesday about whether black people are being treated unfairly in media coverage of post-hurricane looting.

One of the images, shot by photographer Dave Martin for the Associated Press, shows a young black man wading through chest-deep waters after "looting" a grocery store, according to the caption. The young man appears to have a case of Pepsi under one arm and a full garbage bag in tow. In the other, similar shot, taken by photographer Chris Graythen for AFP/Getty Images, a white man and a light-skinned woman are shown wading through chest-deep water after "finding" goods including bread and soda, according to the caption, in a local grocery store.

The images were both published on Tuesday by Yahoo News. "We don't edit photo captions," Yahoo P.R. manager Brian Nelson told Salon. "Sometimes we take a look at the photos and we'll choose to pull photos, but the captions run as is." A search of AP and Getty's image databases confirms that Yahoo News did not alter either of the photo captions before posting them online.

Looting has become a serious problem in the aftermath of Katrina, and conditions in the area continue to be extremely challenging for everyone, journalists included. Bloggers were quick to raise allegations of insensitivity and racism regarding the disparity in the two captions -- but did they pass judgment too quickly? Not only did the photos come from separate outlets, bloggers had no knowledge of the circumstances in which the shots were taken, beyond what appeared in the published captions.

On Wednesday, D.C. Web gossip Wonkette suggested the Associated Press should apologize, while a blogger at Daily Kos commented alongside the juxtaposed images, "And don't forget. It's not looting if you're white."

"I am curious how one photographer knew the food was looted by one but not the other," wrote Boston Globe correspondent Christina Pazzanese, in a letter posted on media commentator Jim Romenesko's blog. "Were interviews conducted as they swam by? Should editors, in a rush to publish poignant or startling images, relax their standards or allow personal or regional biases creep into captions and stories?"

The AP database includes two other images from the same scene by photographer Dave Martin that refer to looters in the captions, though neither actually shows an explicit act of looting. Jack Stokes, AP's director of media relations, confirmed today that Martin says he witnessed the people in his images looting a grocery store. "He saw the person go into the shop and take the goods," Stokes said, "and that's why he wrote 'looting' in the caption."

Santiago Lyon, AP's director of photography, told Salon that all captions are vetted by editors and are the result of a dialogue between editor and photographer. Lyon said AP's policy is that each photographer can describe only what he or she actually sees. He added, "When we see people go into businesses and come out with goods, we call it 'looting.'" On the other hand, he said, "When we just see them carrying things down the road, we call it 'carrying items.'"

Regarding the AFP/Getty "finding" photo by Graythen, Getty spokeswoman Bridget Russel said, "This is obviously a big tragedy down there, so we're being careful with how we credit these photos." Russel said that Graythen had discussed the image in question with his editor and that if Graythen didn't witness the two people in the image in the act of looting, then he couldn't say they were looting.

But if he didn't witness an act of looting, how did Graythen determine where the items came from, or if they were "found"? "I wish I could tell you," Russel said. "I haven't been able to talk to Chris."

"The only thing I can tell you is they don't assume one way or another," she added.

Yahoo News published another photo Tuesday of a looting scene that caught bloggers' attention. This one, by AP photographer Bill Feig, shows a white man walking away from a looted convenience store, looking in a grocery bag, while a black man jumps out of the store's broken front window. The caption reads, "As one person looks through their shopping bag, left, another jumps through a broken window, while leaving a convenience store ... in Metairie, La." According to the caption, Feig shot the image while on a helicopter tour of Louisiana with Gov. Kathleen Blanco.

"I think it's fair to say that he described what he saw ... which is somebody going through their bag," Stokes said, affirming that Feig must not have seen the man with the grocery bag actually leaving the looted store.

Both Stokes and Russel said their photographers would be unable to comment further on the images for now, because of the chaos and poor communications conditions prevailing in New Orleans and the surrounding region.

The stakes remain high in the aftermath of this disaster, says Pazzanese. "Seems to me the national 'crisis mode' coverage of Katrina in a predominantly black, poor part of the country presents a number of professional challenges for everyone in the media around the subject of racial and economic sensitivity," she wrote on Romenesko. "Perhaps these photos will stimulate a media 'gut check' as we race to tell the stories of the thousands who lost their lives and livelihoods."

Aaron Kinney is a writer in San Francisco. He has a blog.