Why has it taken thousands of hurricane fatalities to finally wake up reporters? 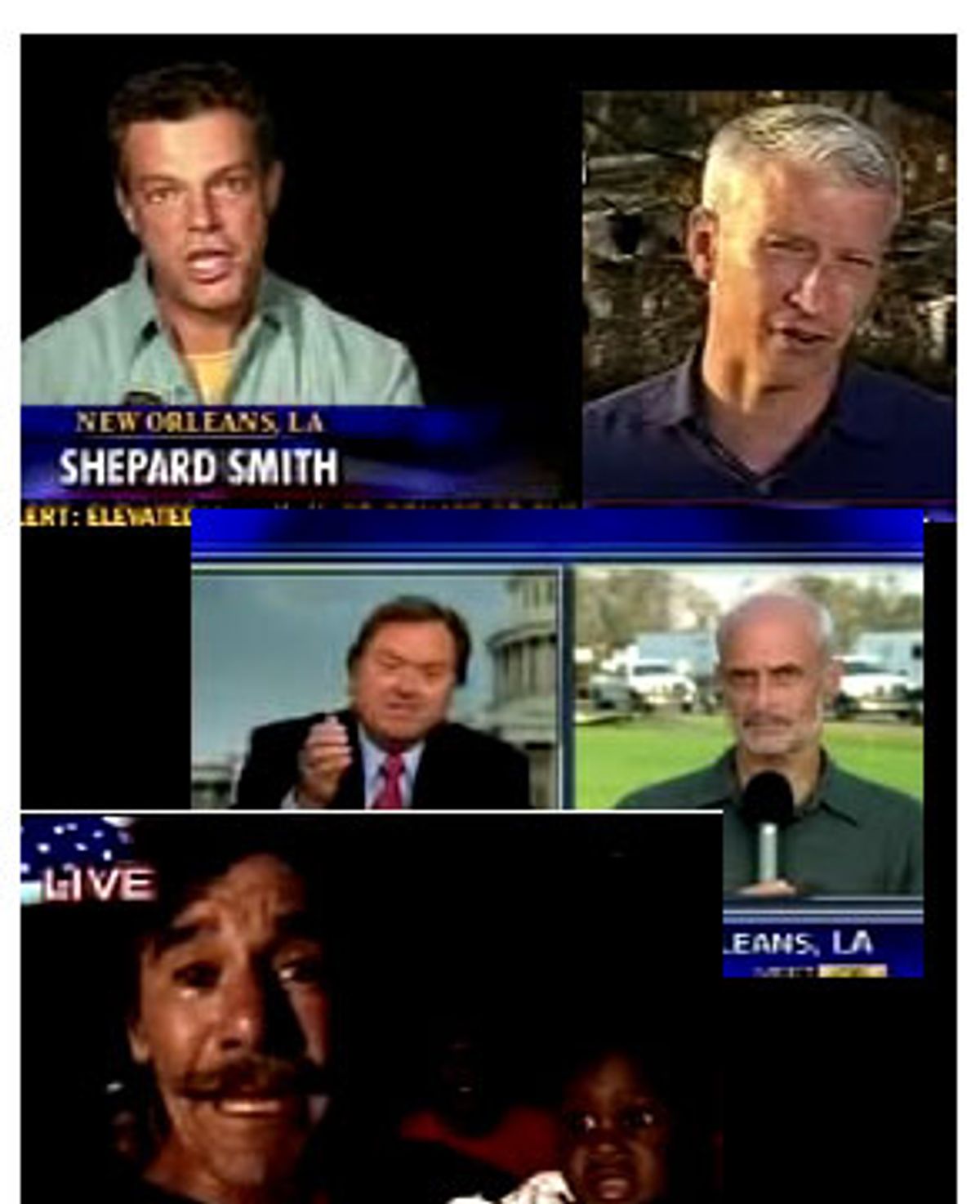 Frustrated news consumers are supposed to be cheering that the national press corps has finally awoken from its five-year, self-induced slumber, opting to play hardball with the Bush administration by actually holding officials accountable in the wake of the Hurricane Katrina catastrophe. Stunned by what they have witnessed firsthand in the Big Easy cesspool, reporters, especially television news correspondents, are leading the sense of outrage and bringing back some welcome passion to their trade.

Their poignant outbursts have been noted, and in some cases toasted, by the New York Times, the New York Observer, the Los Angeles Times, the Washington Post, the BBC, Slate and Salon, among others, as signs of a renewed media vigor. "Amidst the horror, American broadcast journalism just might have grown its spine back, thanks to Katrina," the BBC declared.

Indeed, there was CNN's Anderson Cooper interrupting a Louisiana pol on live TV. There was ABC's Ted Koppel grilling Michael Brown, the bewildered chief of the Federal Emergency Management Agency. There was NBC's Tim Russert barking, "How could the president be so wrong, so misinformed?" And there was the White House press corps undressing White House spokesman Scott McClellan in Tuesday's bare-knuckle press briefing.

Forgive some of us for not celebrating the press's coming-out party. The fact that this kind of aggressive questioning of people in power during times of crisis now passes as news itself only highlights just how timid the mainstream press corps has been during the Bush years.

Is it too much to ask for Russert to just once have shown the same passion -- or even hint of outrage -- when interviewing Vice President Dick Cheney about the administration's botched occupation of Iraq in which nearly 2,000 Americans have died? ("How could the president be so wrong, so misinformed?" Russert could have demanded.) Imagine if the press had shown a glimmer of its newfound truth-telling fervor while pursuing the WMD fiasco or uncovering the Swift Boat Veterans for Truth hoax last year, or half a dozen lesser episodes in which the Bush White House mugged the truth and the press knew it but then looked away.

It's hard to decide which is more troubling: that it took the national press corps five years to summon up enough courage to report, without apology, that what the Bush administration says and does are often two different things, or that it took the sight of bodies floating facedown in the streets of New Orleans to trigger a change in the press's behavior.

Think about it. It took the worst U.S. natural disaster in a century -- with a Civil War-like refugee crisis and undiluted chaos throughout New Orleans -- for the mainstream press to conquer, at least temporarily, its collective fear of offending Republicans and the White House and its trepidation toward the angry army of press haters complaining about liberal bias and report what it believed was the truth.

The consensus among observers of this press phenomenon is that reporters in the besieged city experienced such a huge disconnect between what they were seeing up close and what they were hearing from relief officials (e.g., Brown's early assertion that the federal relief effort was "going relatively well") that they couldn't help boiling over on the air. No doubt that's true. But for how many months (years?) have reporters in Iraq been witnessing the disconnect between the often burgeoning, bloody insurgency and rhetoric from White House officials who insist the insurgents are actually in their "final throes"? Why have so little anger and passion about Iraq appeared on TV screens? One answer: There's a powerful conservative push-back against the press when it hits hard on Iraq -- which so far has not occurred regarding Katrina.

What's more, as observers have noted, the flashes of media anger over Katrina began to flare up only late last week, several days after the storm hit. Indeed, the media was initially in its patented hands-off crouch when faced with the possibility of criticizing the Bush administration. If the New Orleans levees had held and Katrina had killed only a dozen or two poor people and made a mess of the Southern city, and the administration had responded with the same type of lackluster relief, odds are the press would have issued the White House yet another free pass.

The media's telltale timidity early on was there for all to see. For instance, the day after the city was washed away, USA Today reported that experts had been warning about the possibility of a catastrophic flood in the region for years and that Louisiana legislators had been begging for funds to secure the city's levee system. But the cold facts were that the Bush White House, stretched thin by the war in Iraq, drastically cut back funding for New Orleans' flood prevention efforts. Yet here's the generic, kid-gloved way USA Today, the nation's most-read newspaper, chose to inform readers about the levee funding:

"Every year, the [U.S. Army Corps of Engineers] spends tens of millions of dollars repairing and upgrading flood walls, levees and pump stations, setting priorities for which jobs it tackles. But Congress hasn't given the Corps the money it says it needs to make the upgrades needed to protect New Orleans from the most serious storms" (emphasis added).

The Associated Press played the same game. Republicans control the House, the Senate, the White House and all funding appropriations, but somehow, according to AP, it was mostly unnamed "political leaders," "politicians" and "government leaders" who failed Katrina's victims.

CNN's Wolf Blitzer interviewed former Louisiana Sen. John Breaux and pressed him about the issue of the levee funding. Blitzer wanted to know specifically who was responsible for not getting the job done: "Who resisted? Was it the Clinton administration?" (Emphasis added.) Blitzer never bothered to ask about the Bush administration's role in neglecting the levees.

And here's how the Washington Post, in a Sept. 1 editorial that should live in infamy, described the administration's disaster relief: "So far, the federal government's immediate response to the destruction of one of the nation's most historic cities does seem commensurate with the scale of the disaster."

Three days later David Broder, the dean of the D.C. press corps, also came to Bush's aid, suggesting that the turmoil in New Orleans represented "an advantageous setting" for the president and that his handling of the situation would open "new opportunities for him to regain his standing with the public."

It's important to note for the record that it was the conservative editors at the New Hampshire Union Leader who quickly underscored the White House's deadly slow response to Katrina. In a biting editorial published Aug. 31, days before the mainstream press got up enough courage to criticize the federal relief efforts, the paper noted, "As the extent of Hurricane Katrina's devastation became clearer on Tuesday ... President Bush carried on with his plans to speak in San Diego, as if nothing important had happened the day before. A better leader would have flown straight to the disaster zone and announced the immediate mobilization of every available resource to rescue the stranded, find and bury the dead, and keep the survivors fed, clothed, sheltered and free of disease."

The paper concluded: "The cool, confident, intuitive leadership Bush exhibited in his first term, particularly in the months immediately following Sept. 11, 2001, has vanished. In its place is a diffident detachment unsuitable for the leader of a nation facing war, natural disaster and economic uncertainty. Wherever the old George W. Bush went, we sure wish we had him back."

It was the type of stinging, accurate broadside the national press was just not willing to make right out of the blocks. Yes, in the crucial days right after Katrina hit, Bush declined to address the nation in prime time. Yes, he refused to cancel his umpteenth public pep talk about Iraq in front of a grateful group of military men and women, which only Fox News carried live. Yes, while he was taking part in a goofy backstage photo op with a country music singer, New Orleans was sinking into complete and utter chaos. Yes, New Orleans' mayor had already announced the death toll was likely to be in the thousands. And yes, gangs of looters were ransacking portions of the city. But for three days last week -- on Aug. 29, 30 and 31 -- the mainstream media really didn't say boo about Bush.

Even on Sept. 2, when the New York Times acknowledged that Bush was taking heat for his handling of the crisis, the paper couched it in purely partisan terms, under the headline: "Democrats and Others Criticize White House's Response to Disaster."

Eventually, though, the pictures from New Orleans became too ghastly to ignore and reporters turned angry.

For years, frustrated news consumers have wondered what it would take to finally awaken the press from its perpetual, lazy slumber. Now we know the answer: one ravaged American city and a few thousand dead civilians.