As police throw looters in the Greyhound Bus Station and residents sift through toxic mud, rescuers call out for survivors in vain. 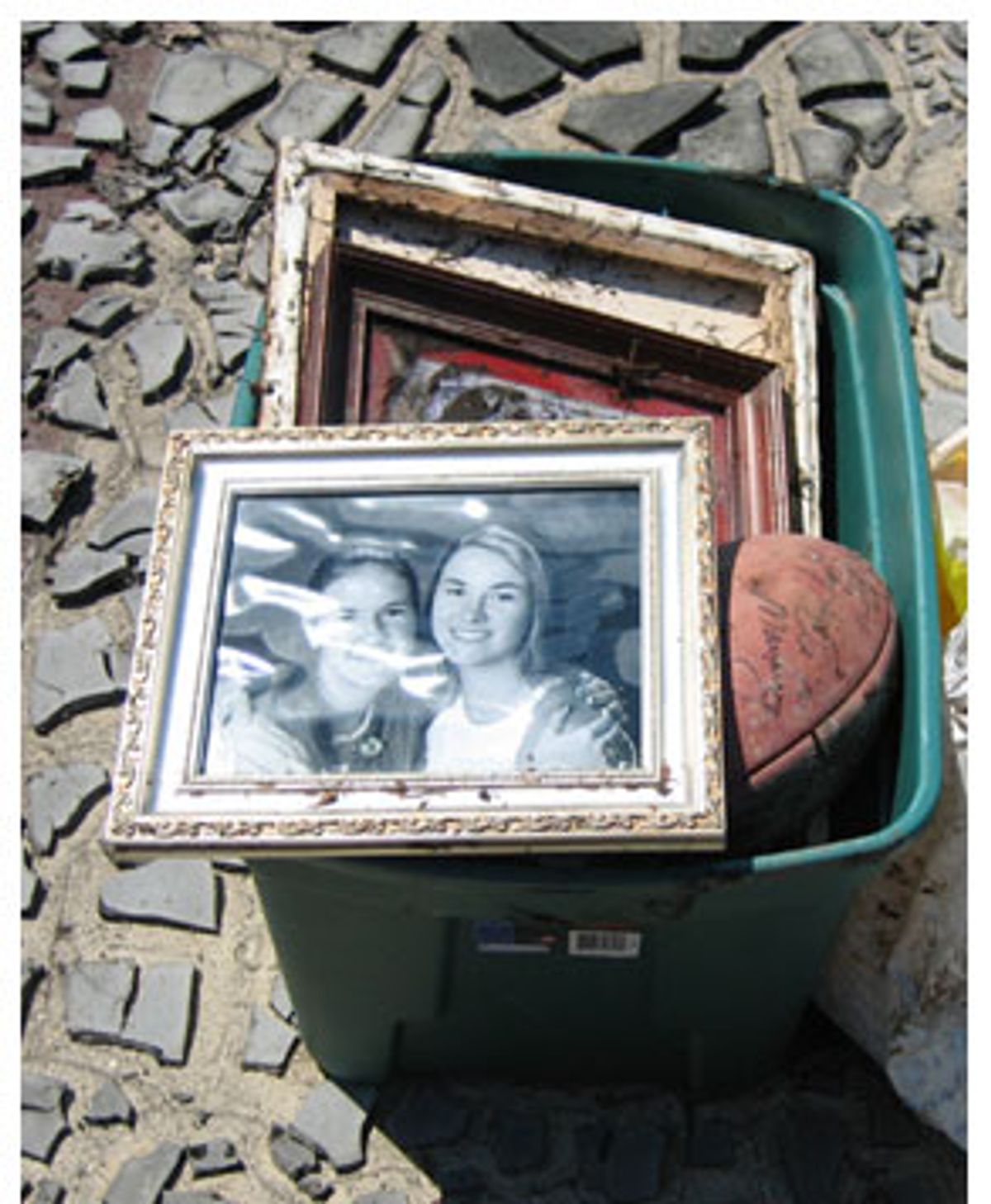 There is nothing left for Dr. Bryan Bertucci to do, so he stands in the sun by the side of Route 46 in St. Bernard Parish. He gazes over at St. Rita's nursing home, a simple brick rectangle that now entombs about 30 of his former patients. "It was one of the best homes in the area," he says.

Bertucci works part time as the parish coroner, and he has counted 64 bodies since the storm hit. About half of them still lie in St. Rita's, a home for the elderly and infirm that did not evacuate before the storm. The building is still surrounded by water and caked in mud. Snakes slither on the banks. The hazmat crews were able to retrieve four bodies yesterday. They have left the rest until the water goes down.

On a normal week, Bertucci works 80 or 100 hours. When the storm hit, he helped empty a nearby hospital, evacuating the patients to a jail on higher ground, rationing the I.V. drips, administering the antibiotics. It was days before he had a shower or changed clothes. Now, for the time being, his work is done. "I am not used to being still," he says. "It is very hard for me." But he has been drawn to the road outside of St. Rita's. As part of his private practice, he used to visit the residents once a month to tend to their needs. He said they loved the home. He says a lot of doctors don't realize how rewarding nursing home work can be.

"Around Christmas we would sing Christmas carols," he says, dressed in a clean hospital smock, a bright white baseball cap and a Mickey Mouse watch. "They didn't know the words, but I didn't either."

There was a time when Bertucci planned to become a Jesuit priest, but he became a doctor instead, fulfilling a similar call to service. Before Hurricane Katrina hit, Bertucci says, the parish offered buses to the residents of St. Rita's. But simply moving some of the elderly patients could have endangered their lives, he says, and so they chose to ride the storm out. "It was just a bad decision." He lost two houses himself, and his business. He sips from a Gatorade bottle to guard against dehydration. "I am going to stay here until they get my people out," he says, wiping a tear from the edge of his left eye.

Ten days after Katrina, the remaining residents of the New Orleans area are in a daze. The rate of rescues has slowed to a trickle, but the helicopters still circle in swarms, like flies drawn to the smell of sewage. In the parts of town that have dried, people return to their homes to wade through mud for framed family photos and whatever else isn't ruined -- a football, an antique piece of furniture. "Just stuff to make my wife happy," says Steve Fecke, as he piles photographs and a bedroll on his front stoop. Mostly, though, they find mold already climbing the walls and emaciated dogs wandering the streets.

The highways are littered with abandoned cars, the police are gathering supplies from looted hardware stores, and, at one McDonald's, the golden arches have been blown apart. The Greyhound Station is now the city jail, filled and emptied daily with a steady stream of 45 to 70 looters or worse, says Capt. Chad Dorbonne, an amiable man in a starched white shirt who runs the operation. One of the detainees is charged with eight counts of attempted murder. He shot at police officers as they chased him. "They get food and they get water. They get treated good, which is something they weren't getting on the streets," he says of his inmates.

A sparkling, cream-colored Rolls-Royce sits on the curb outside the jail. It was found with a window busted out and the dashboard ripped apart on Wednesday, the sort of looting trophy that a disaster like this makes seem ridiculous. Over at the Sheraton, Blackwater Security, famous for its exploits in Iraq, has taken up position, each man with a machine gun and a pistol. They are the alpha males of the security set, which now includes police and National Guard members from nearly every state.

In Chalmette, a community in St. Bernard Parish, whole neighborhoods are slick with crude oil that flowed out of the nearby Murphy Oil Refinery. Lost lap dogs trudge through the stuff, looking like birds caught in the Exxon Valdez spill. Residents drive the streets with no clear direction. Alan Clomburg, a repairman for oceanbound ships at Buck Kreihs, keeps his pistol by the passenger seat and his wet passport on the dashboard. He still hasn't left his hometown, evacuation orders or no. "I got to go to work," he says, as if the docks might reopen soon.

On the morning of the storm, a week ago Monday, he called his wife at 8:30 a.m. to say the house had survived and everyone was safe. Just then, the waters started to rise. "Fifteen minutes and it was 6 feet high," he said. "You see vans float down the street." He knew not to go to the attic, fearing that he might be trapped, so he loaded his parents, both in the 80s, into a flatbed boat and lashed it to the side of his house. He had to dive underwater to get out of his house after rescuing his dog. Six hours passed, in the wind and the rain. Then he steered the boat to dry land.

Ten days later, he is still driving around in a jeep caked with oil and mud. "I'm just looking at what I used to have," he says. The oil didn't make it into his house, but it coats the lawn outside. "I just hope they don't play it like an environmental disaster," he says of his town, a hope that will certainly go unfulfilled. The emergency personnel on scene say that it will take 15 years before people can live near this kind of spill. One man points out that the Murphy Oil Refinery had been looking to expand anyway, so maybe they would just buy out the nearby homeowners.

For years, people like Clomburg, and his community leaders, have been asking the federal government to shut down an ill-used shipping canal that connects the Gulf of Mexico to the Mississippi River through St. Bernard Parish's backyard. The canal has been sucking saltwater into the marshes for years, killing them off and eroding the land. As far back as the late 1990s, local politicians have asked for the canal to be closed, warning of the danger of a storm surge. Nothing happened; the Environmental Protection Agency started a study. "Maybe now they will listen to us," says Clomburg.

But the canal is a moot point. St. Bernard Parish is a wasteland of toxic mud. "It is slick out there and it is nasty," Lt. Kevin Cadena of the Colorado National Guard barks to his troops, as they prepare to search door to door for survivors or bodies. "You lose your hat in there, you leave it there. I'll get you another one."

The troops deploy, two at a time, calling into the house for people who do not respond. They search each room anyway, knocking on doors with flashlights, trying not to slip on the mud. If they find a body, they say they will mark it on a map for someone to pick up later on. The only sound comes from a desperate dog barking in front of an empty house.

Outside St. Rita's, a few miles away, Dr. Bertucci looks at the pool of water between him and the bodies of his former patients. "The world as I knew it does not exist anymore," he says.