Tales of a teenage slut

In a hilarious new memoir, a "Six Feet Under" writer tackles feminism, teen sex, race relations -- and her dream of an all-female island. 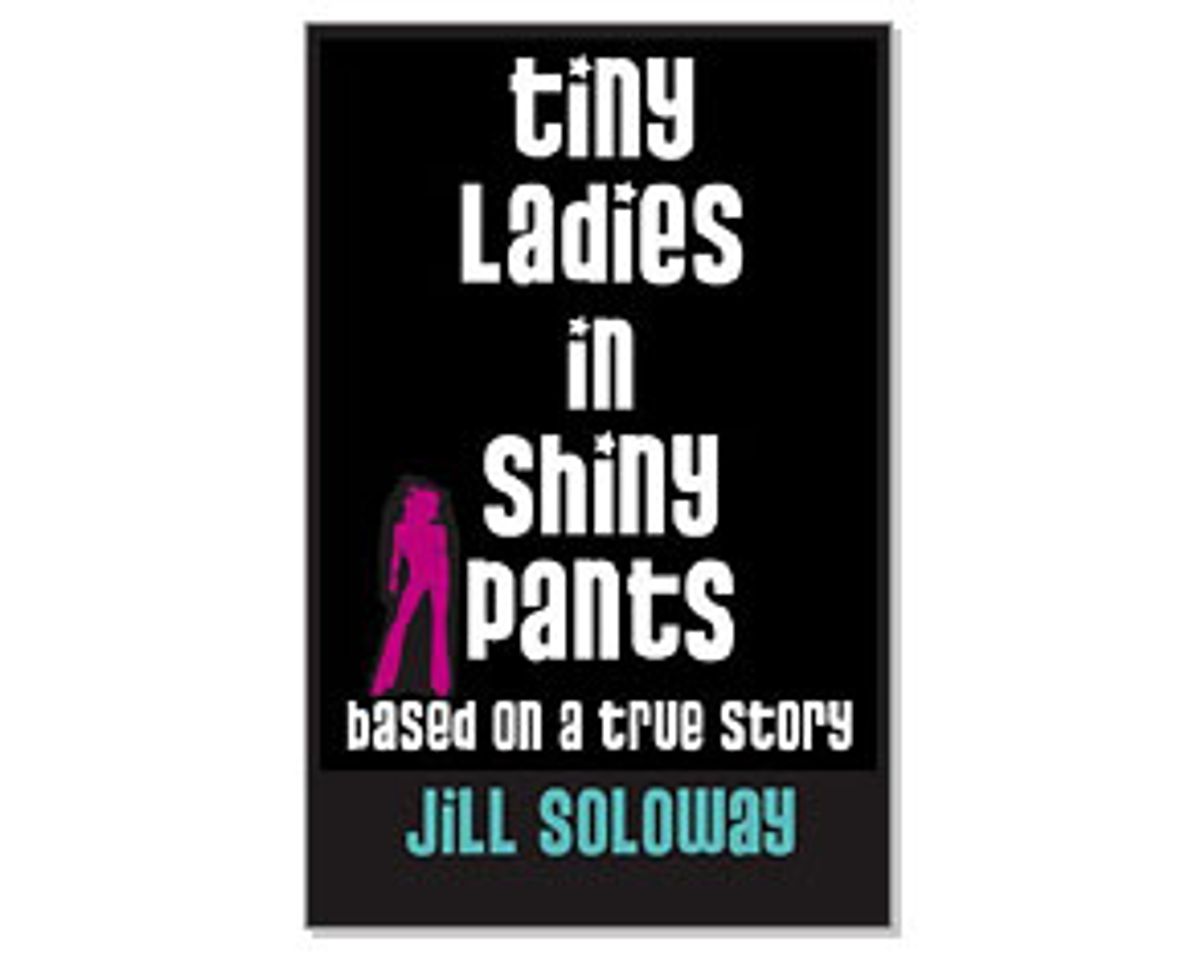 There are things women don't like to admit to each other, those dark little details and shameful episodes that we hide from the world like unsightly patches of body hair. Whether it's a slutty teenage past or a temper tantrum that landed us firmly in the realm of "psycho chick," we often have trouble being honest with each other about our histories, so that a shroud of shame and anguish blankets our earliest experiences of sexual power. See how queasy it made you feel, just to read the words "sexual power"? Well, help is on the way, in the form of a hilarious memoir by "Six Feet Under" writer Jill Soloway.

In "Tiny Ladies in Shiny Pants," Soloway courageously dives right into her past -- armed with a dangerous intellect, a prickly sense of outrage, and a scathing wit -- and comes to the surface with a riotously good read. Spending time with her book is like spending an afternoon with your closest, funniest girlfriend -- the one whose tragic anecdotes and outlandish pronouncements on everything wrong with the world match your own feelings so exquisitely that, after several cups of strong coffee, you feel that together you might stumble on some life-changing epiphany. (Mostly, though, you just snort coffee through your noses.)

Soloway's prose is relentlessly conversational, and while red flags go up at first -- "This author certainly fancies herself oh-so witty and charming!" -- the truth is that Soloway is so witty and charming that she gets away with it. Whether she's describing what it's like to grow up in a black neighborhood, wanting her schoolmates to think that she was somehow "down" with them, or outlining her all-woman escape fantasy, to a place called Lesbo Island -- which she'll name something innocuous like "Feather Crest," of course, in order not to scare away all potential candidates -- Soloway seems to enjoy laying out her most outlandish notions, all the while exposing the odd logic behind her worldview.

Most of all, Soloway captures the queasy confusion of growing up enthusiastic and somewhat naive, armed with massive breasts and a lifetime of being told by her mother that she deserved "anything your little heart desires." She cuts through the idiotic rituals of young, white, middle-class women by exposing her own disorienting feelings and insecurities; she makes it clear how susceptible we are to conformist pressures, and how much we crave attention and praise and like to think of ourselves as fabulous -- even though we get a glimpse, every now and then, of ourselves as foolish and sad and small. From the absurdities of her sorority rush to the thrills and spills of sleeping with a cheesy 36-year-old guy when she was just 17, Soloway admits her missteps with admirable aplomb, and offers a play-by-play that sheds light on the bizarre heuristics of a young woman. She describes the older-guy experience in particularly heartbreaking detail: "I was running from the bathroom back to his bed, leaving slivers of myself everywhere: the girl who wanted to be here, the girl who didn't want to be here, the girl who thought the whole thing was exciting, that he was an idiot, that his apartment was tacky, yet sexy, that I was turned on, that I wasn't, that this was fun, that it wasn't."

What young woman hasn't navigated a similar bizarre soup of emotions before, either surrounding sex or dating or what to do when the guy who sits next to you in math class slips you a dirty note?

Sadly, in these screwy times, it's rare to find a contemporary female writer who dares to suggest that feminism is a perfectly reasonable response to the current cultural "Girls Gone Wild" madness -- and rarer still to find one who actually has a sense of humor about the whole thing. In discussing her "tortured soul sister" Monica Lewinsky or why the bars of L.A. are filled with skinny blond teenagers with flat-ironed hair, Soloway demonstrates that it is possible to speak out against the madness, even while discussing the joys of cop bars. Or, as Soloway puts it, "I wanted to prove that women could rule the world, yet I refused to stop watching Miss America."

Soloway may be pissed off, but she gets us on her side by admitting things that most of us never could: That sometimes the people who say, "Everything happens for a reason" deserve a kick in the groin, or that there are days when the word "Toyotathon" can send even the most resilient, optimistic person into a serious funk. And that, even though we're all supposed to treasure exciting new experiences, there are still those times when we bite off more than we can chew. Like, maybe we go to sleepaway camp or on a solo vacation in Costa Rica, and instead of having a courageous adventure, we call our parents to pick us up, or ring up our awful boyfriend, whom we can't stand, to tell him that we love him and miss him like crazy. What's harder to admit than having bailed on your trip to Costa Rica so you could spend more time with your mediocre, not-very-nice boyfriend?

But just when you think Soloway might slip into a fog of rage and confusion, her sense of humor saves her. As a coda to her story about the 36-year-old lover, she mentions that she and her friends spotted him at the pool a few months later. In fact, he even came over and asked them, "Have you seen my lotion bag?"

The girls were confused by this question, so he elaborated, "My lotion bag. It's missing. My leather pouch? It's black and I keep my lotions in it." They replied that they hadn't seen his lotion bag. Right after he left, though, Soloway's sister mumbled, in a very tiny voice: "Lotion bag." The group broke down laughing.

From then on, the older guy was known among her friends as "Lotion Bag." Soloway writes, "And somehow, I knew that even if he was thirty-six and I was seventeen, even if I had sex with him when I wasn't sure that I even wanted to, even if he had told me I had hair growing underneath my arms and that I was rapidly falling away from perfect, now that he was Lotion Bag, I had won."

"Tiny Ladies in Shiny Pants" may be easy to write off as nothing more than a fun, goofy read, but it's really more than that. I can't help considering a woman who's this honest and this funny as nothing short of revolutionary. In a passage I return to over and over again, feminist poet Adrienne Rich writes, "Women have often felt insane when cleaving to the truth of our experience. Our future depends on the sanity of each of us, and we have a profound stake, beyond the personal, in the project of describing our reality as candidly and fully as we can to each other ... When a woman tells the truth she is creating the possibility for more truth around her."

Beyond entertaining us, Soloway shows us that, armed with the truth -- and a wicked sense of humor, of course -- we can do anything.