Those who are staying

They have nowhere to go, or want to save their belongings, or are scared. A day in New Orleans with the holdouts. 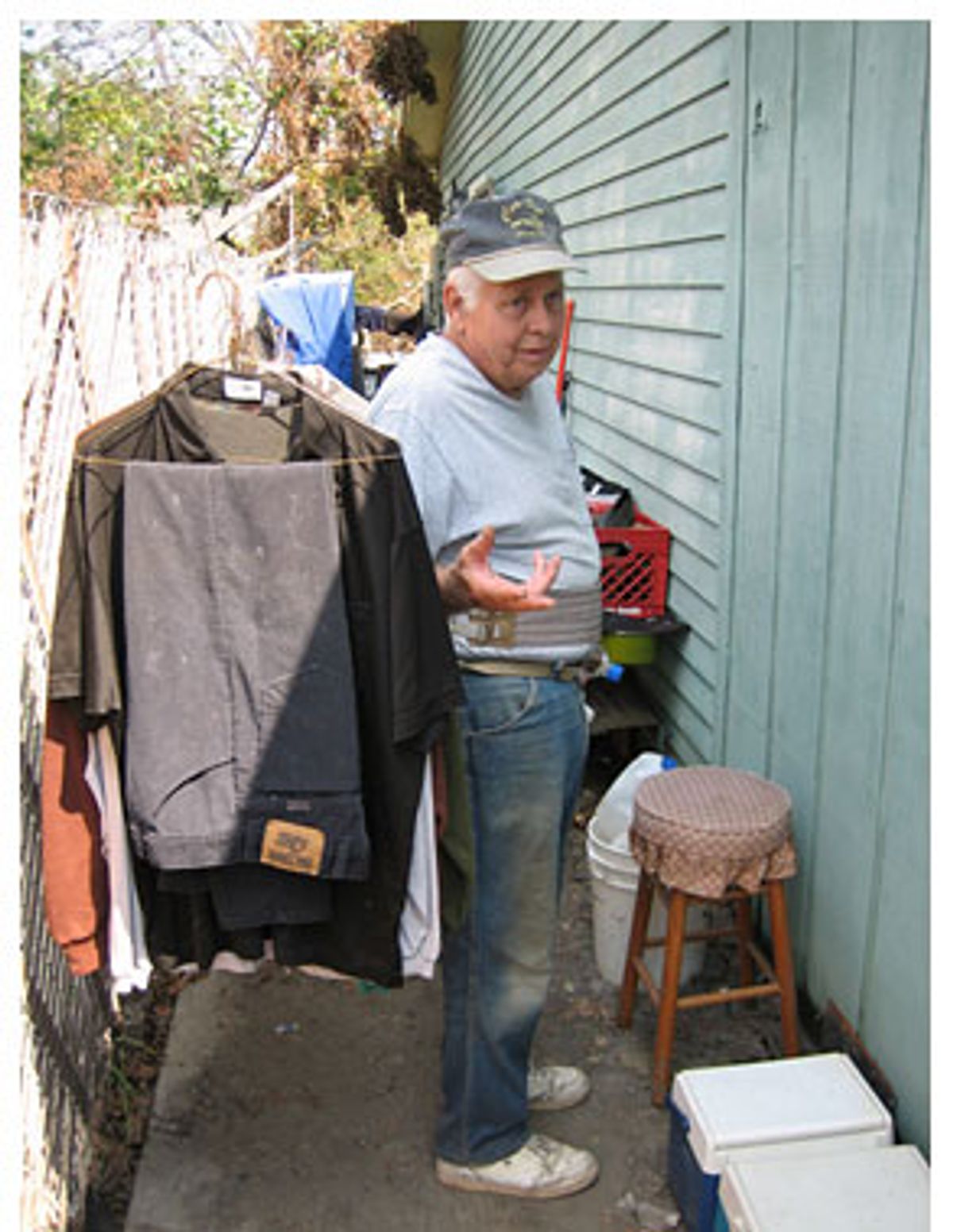 "Everything got wet," says Bobby Rideau, 66, as he walks down the alley that leads to his apartment door in East New Orleans. He has hung his clothes to dry along a wooden fence. "What am I going to do? Go out and let this stuff mildew, and then on a Social Security check try to replace this stuff. That would be stupid."

Rideau, who is 66, worked for years as a manager at a local liquor store. Most of his family has passed away. He has spent the last two weeks at his home, a single-room apartment in a poor section of town just a few blocks from Lake Pontchartrain. He was home when the storm hit. It nearly ripped away his roof, and when the floodwaters began to rise, he floated his television on his mattress to save it. Then he stood still for the better part of the day, most of his body submerged. "The water level was up to here," he says, pointing to his window sill. When it receded, there were a couple of inches of mud coating everything. He has been scrubbing ever since. "Just glance at the floor," he says, pointing to the clean linoleum on one side of his bed. "Show you what kind of work I've been doing."

Rideau is one of hundreds, if not thousands, who have not yet responded to Mayor Ray Nagin's call to leave the city. The police say they are coming for them, but it won't be any time soon. "We are going to compel people to leave their houses," said Marlon Defillo, a spokesman for the New Orleans police department, on Thursday night, during the department's dinner barbeque at the end of Canal Street. "It could be a week from now. It could be two weeks from now."

Downtown New Orleans has been transformed into the safest city in America, a block of office buildings and hotels where as many as 10,000 law enforcement officers base their operations. At the southern edge of the city, where antebellum mansions abut the high levees on the Mississippi River, the damage appears limited to a few broken windows and some leaves shaken from the trees that line St. Charles Avenue. News organizations have begun to rent homes there to save on the hotel fees.

But in the poorer wards, residents still wander through their mud-strewn homes confused, unsure what the evacuation orders could mean. When they run low on food or water, they walk to a major road to flag down Army convoys or passing journalists. When they sit on their stoops, they worry they could be dropped in the sort of chaos that last week befell the Superdome and the convention center.

"They got to put me in a room by myself," said Anthony Brumfield, a 47-year-old veteran of Operation Desert Storm, who lives across the street from Rideau. "I know I would strike out and hurt someone. I want to save people. I don't want to kill people."

Across town Ott Howell is staying put in the French Quarter. He has 20 gallons of water, and a museum to guard, the Beauregard-Keyes House, a collection of the Civil War belongings of Confederate Gen. PGT Beauregard, where Howell worked before the flood. Howell calls Beauregard "one of the great generals of the war of northern aggression." "This house kind of becomes a part of you," he said as he stood on the front stoop. Howell doesn't have a lot of food, but he says he can hold out: "I can do a month on body fat alone."

At Lee Circle, a stop on the Mardi Gras parade route, three old men sit on folding chairs drinking red wine and liquor from bottles, trying to keep up their town's famous spirit. "A day without a martini is a day without sunshine," says a 77-year-old native who gives his name as Peter Coby, a pseudonym he has used in the past to sign his paintings. "I have children all over the world. I don't want them to pick up a paper and see that I am staying. Because that makes me an asshole."

Those who do decide to leave are escorted to an evacuation center that has been set up in a parking lot at the north end of the convention center. Staff Sgt. Dennis Lance, of the Army's 82nd Airborne, spends his day escorting people down the road to the buses. Since Sept. 11, 2001, he has been through two tours of Afghanistan and several months in Fallujah, Iraq. "It's bad to see it when it is your country," says Sgt. Lance of the mountains of refuse that still surround the Convention Center. "But I'd rather be here."

Cleaning crews have begun sweeping up the piles of trash. They scour the garbage for the bounty that looters left behind. A 16-year-old high school student with a broom says he found a loaded .40 caliber Glock in a garbage can and turned it over to the police. He found seven new Citizen watches, each one worth more than $200. The cleaning crew split them among themselves. He will pawn his, he says, because his girlfriend gave him the Fossil watch he is wearing. "I value my life," he jokes. "Hey, need a cigarette case? Brand new."

A man named Arthur Petivaf wanders onto the street, holding the leashes of his three dogs. Their names are Pepper, Pardo and Luca. Petivaf has spent most of the last week sleeping in a parking garage, after helping to evacuate hundreds of his neighbors. Until the storm, he was in real estate. He says he owned five houses in the area. Now he holds his pants up with a belt made of telephone wire. He does not want to go to the evacuation center.

"They are going to kill my dogs," he says.

But Petivaf is tired, and Sgt. Lance speaks softly and reassures him about his dogs. Before long, Petivaf and his dogs are preparing to board a bus for the New Orleans International Airport, where he will be processed. Then he will be sent on to somewhere else. Neither Petivaf nor anyone else knew where.