Breach of a myth

After Katrina, the country no longer believes in Bush the protector. His presidency is ruined. 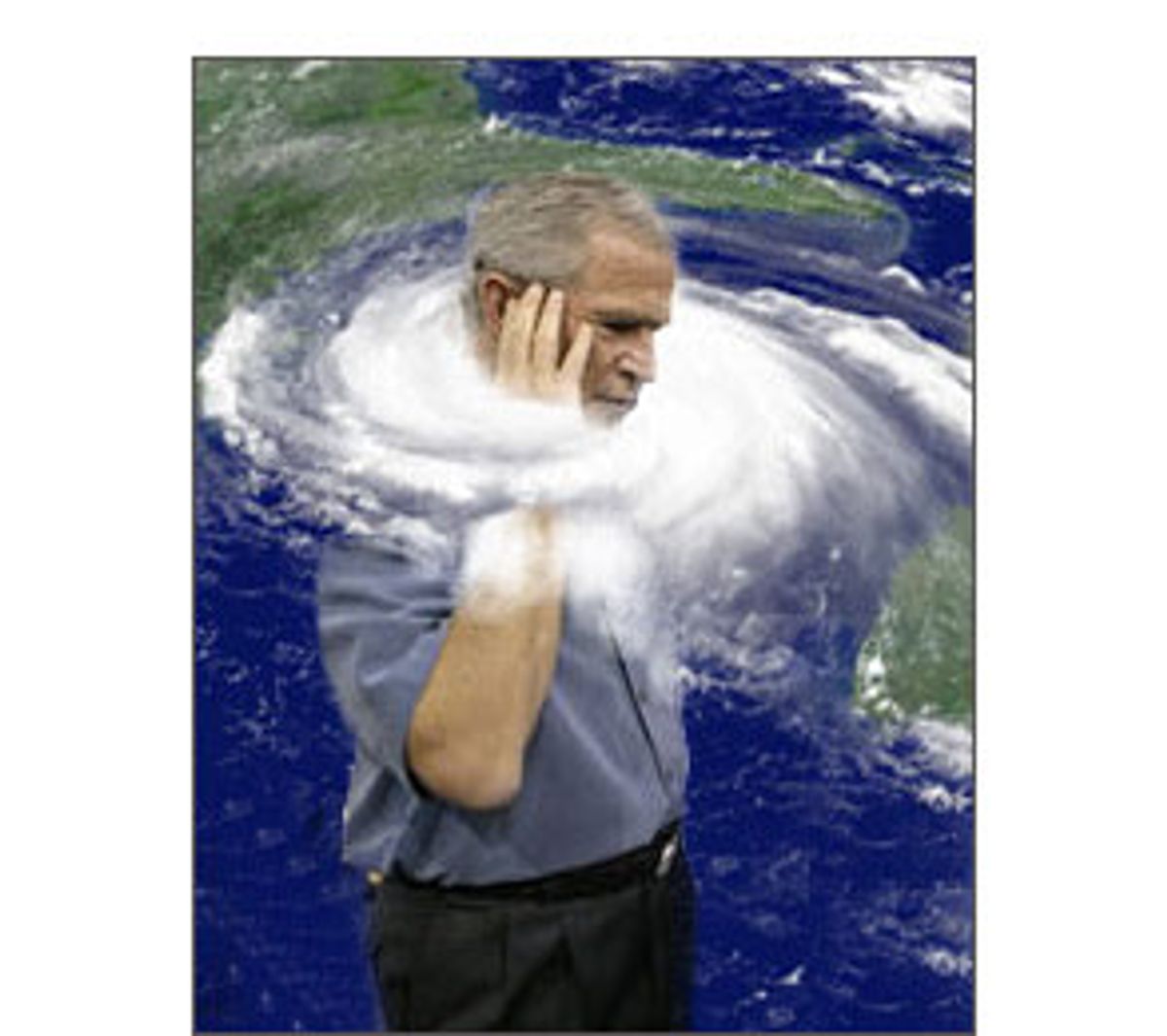 Bush's America is gone with the wind. It lasted just short of four years, from Sept. 11, 2001, to Aug. 29, 2005. The devastation of New Orleans was the watery equivalent of a dirty bomb, but Hurricane Katrina approached the homeland with advance warnings, scientific anticipation and a personal briefing of the president by the director of the National Hurricane Center, alerting him about a possible breaching of the levees. It was as predictable as though Osama bin Laden had phoned in every detail to the television networks. No future terrorist attack would or could be as completely foreseen as Katrina.

Bush's entire presidency and reelection campaign were organized around one master idea: He stood as the protector and savior of the American people under siege. On this mystique he built his persona as a decisive man of conviction and action. In the 2004 election, a critical mass of voters believed that because of his unabashed patriotism and unembarrassed religiosity he would do more to protect the country. They also believed that his fervor must be strength. The criticism of Bush that he was overzealous, simplistic and single-minded only served to reinforce his image.

The deepest wound is not that he was incapable of defending the country but that he has shown he lacks the will to do so. In Bush's own evangelical language, he revealed his heart.

Overnight, the press disclosed a petulant, vacillating president it had not noticed before. It was as if there were a new man in the White House. Time magazine described a "rigid and top-down" White House where aides are petrified to deliver bad news to a "yelling" president. Newsweek reported that two days after the hurricane, top White House aides, who "cringe" before the "cold and snappish" president, met to decide which of them would be assigned the miserable task of telling Bush he would have to cut short his summer vacation. "The [hurricane's] reality, say several aides who did not wish to be quoted because it might displease the president, did not really sink in until Thursday night."

With each of his three trips (so far) to survey the toxic floodwaters of New Orleans, Bush drifted farther out to sea. On his most recent voyage on Monday, asked about his earlier statement -- "I don't think anybody anticipated the breach of the levees" -- he said, "When that storm came through at first, people said, Whew. There was a sense of relaxation." In fact, the levees began to be breached even before the eye of the storm hit the city. Queried about the sudden resignation that day of Federal Emergency Management Agency director Michael "Brownie, You've Done a Heck of a Job" Brown, Bush told the press, "Maybe you know something I don't know." On Tuesday, all else having failed, he tried a novel tactic to deflect the "blame game," as he called it. "To the extent that the federal government didn't fully do its job right," he declared, "I take responsibility." "Extent" was the loophole allowing his magnanimity to be bestowed on the distant abstraction of government.

It was easier for Bush to renounce alcohol at age 40 than ideology at almost 60. Bush had radicalized Ronald Reagan's conservatism, but never has Reagan's credo from his first inaugural rung so hollow: "Government is not the solution to our problem." Yet social Darwinism cannot protect the homeland. That 20,000 mostly poor blacks were locked in the New Orleans Convention Center without food and water for several days without the knowledge of federal officials is not an urban legend.

Poverty, previously unmentionable, has increased about 9 percent since Bush assumed office. The disparity between the superpower's evangelical mission to democratize the world and its indifference at home is a foreign policy crisis of new dimension. Can Iraq be saved if Louisiana is lost? Bush's credibility gap is a geopolitical problem without a geopolitical solution. Assuming a new mission, Secretary of State Condoleezza Rice wears her racial identity to witness for Bush's purity of heart. So long as Bush could wrap himself in 9/11 his image was shielded; he could even justify Iraq by flashing the non sequitur to his base. But once another event of magnitude thundered over his central claim as national defender, the Bush myth crumbled. It would take another event of this scale to begin to restore it. But it would also require a different set of responses from Bush. Now his evocation of 9/11 only reminds the public of his failed promise.

The rest of the Bush presidency will consist of his strained efforts to cobble his myth together again while others cope with the consequences of his damage. The hurricane has tossed and turned the country but will not deposit it on firm ground for at least the three and half years remaining of the ruined Bush presidency.