George Clooney's second directorial project refuses to sacrifice craftsmanship to polemics, even as it kicks the pants of the contemporary media. 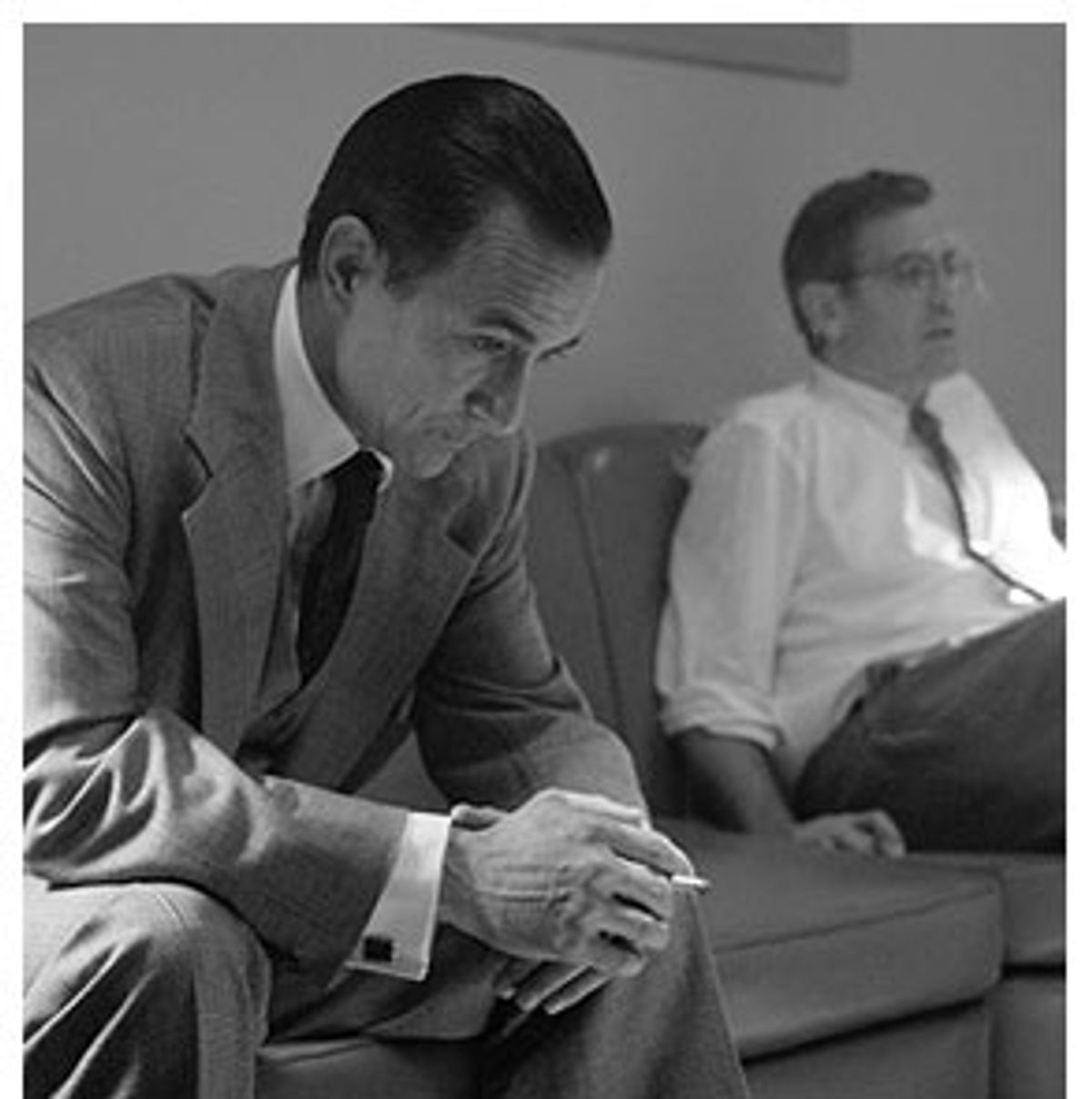 George Clooney's second picture as a director, "Good Night, and Good Luck," is a modestly scaled movie, one that cost only around $8 million to make. But there's something deeply luxurious about the mere idea of making, in 2005, a movie about Edward R. Murrow and Joe McCarthy.

This is a picture about a turning point in the media that also helped force a turning point in history, and a movie that asserts, by example, that contemporary news media have let us down. But any old schmo with a point of view can make a polemic. What's exceptional about "Good Night, and Good Luck" -- which opens the New York Film Festival this Friday -- is that it doesn't sacrifice craftsmanship and elegance at the altar of its strong convictions. This is serious grown-up entertainment with a sense of history and a sense of style, the kind of picture almost no one knows how to -- or, perhaps more accurately, can find the means to -- make anymore. It makes you wonder why we so often settle for sackcloth filmmaking -- some of it outrageously expensive -- when we could have bespoke instead.

"Good Night, and Good Luck," co-written by Clooney and Grant Heslov (who also served as producer and has a small role in the picture), focuses on the head-to-head battle that took place between the already-legendary journalist Murrow (David Strathairn) and McCarthy in the early days of broadcast journalism, days in which newsmen like Murrow and producers Fred Friendly (played here by Clooney) and Joe Wershba (Robert Downey Jr.) were just discovering the vast possibilities, as well as the potential abuses, of television news. Clooney and Heslov wrote the picture around words written and spoken by Murrow, taken largely from his "See It Now" broadcasts. "See It Now," which aired on CBS for six years beginning in 1951, was the first newsmagazine show, and it was the forum Murrow used -- after a great deal of deliberation with Friendly and the other members of the CBS news team -- to air the first overt criticism of McCarthy's anti-communist smear campaigns and scare tactics, yanking the curtain back on their obvious unconstitutionality.

Murrow launched the first volley in 1953 with a report on Milo Radulovich, a reservist who'd been dismissed from the Air Force as a security risk because his father and sister allegedly had communist ties. The show attracted McCarthy's attention, and he turned his eye of Sauron on Murrow, accusing him of being a communist sympathizer in the hopes of scaring him off. But Murrow and the team pushed further, preparing another report that exposed even more boldly the chicanery of McCarthy's tactics. For the time being, they had the support of CBS head Bill Paley (played with chilly brilliance by Frank Langella; Jeff Daniels plays his second in command, Sig Mickelson), but even that stood in danger of eroding as Paley acknowledged the reality that the network could make more money off entertainment than it could off news.

Clooney clearly has strong feelings for the material he's working with here, partly because his father worked for years as a news anchor. (Clooney himself almost pursued broadcast journalism as a career.) And the picture's ideology is right upfront, dovetailing with the director's liberal political views, which he's never been afraid to put on the table. The picture is partly an ode to the early days of broadcast journalism and partly a call to arms, a reminder of the standards that contemporary media (of all sorts) ought to be upholding. But what's remarkable about "Good Night, and Good Luck" is the way Clooney, Heslov and the actors make those ideas work so well dramatically.

The chief action in "Good Night, and Good Luck" is decision making: Basically, we're watching a bunch of white guys getting together in a room, talking (and smoking) a lot, and then one of them, Murrow, writes something and goes before the camera. But the picture isn't boring for an instant: Clooney finds shorthand ways to clue us in to the personalities of these men, so they come off as real people rather than as symbols. (And there is one woman, Shirley Wershba, played with delightful sharpness by Patricia Clarkson -- one of the movie's most intriguing sub-threads concerns her marriage to Joe Wershba, which had to be kept secret because of network regulations.) Ray Wise, as news anchor Don Hollenbeck -- who committed suicide as a result of the attacks Hearst columnist and McCarthy flunky Jack O'Brian made against him in print -- gives a beautifully shaped performance in a small role that's nonetheless essential to the movie.

And Strathairn makes a terrific Murrow, showing us a man of intensity and intelligence but also one with a sly, slow-burning sense of humor. (When one of the crew praises an interview he's just completed with Liberace on his other CBS show, the far more lightweight "Person to Person," he gives the guy a sidelong glance like a death ray.) Strathairn's voice has just the right tone and timber -- it does complete justice to Murrow's eloquence. And you need a great voice to carry words like these, from a 1954 "See It Now" broadcast: "We will not be driven by fear into an age of unreason, if we dig deep in our history and our doctrine; and remember that we are not descended from fearful men. Not from men who feared to write, to speak, to associate, and to defend causes that were for the moment unpopular."

Clooney made the smart choice of using actual footage of McCarthy instead of choosing an actor to play him; if there's any truth to the adage that you get the face you deserve, McCarthy, with his darting eyes and whitish, snakelike lips, is the proof.

Even so, Murrow had plenty of principles on his own; he didn't need an over-the-top villain like McCarthy to make him look good. And there is a white-hat, black-hat obviousness to the conflicts dramatized in "Good Night, and Good Luck." But I doubt Clooney believes for a minute he's being subtle about the points he's making. And frankly, in a movie about newsmen who, after a great deal of careful deliberation and research, decide it's time to call Joe McCarthy's bluff, why should he have to be? The more important point is that Clooney doesn't treat history as a dead, dull thing: He's completely open to the life of it, and his enthusiasm opens the movie up wide. The picture has an accurate period look, but it's a vivid one: Shot by Robert Elswit in lush, velvety black-and-white, the picture is so rich and so tactile, you want to reach out and touch it. Even the sound design is remarkable, capturing the way the texture of spoken words shifts and changes between newsroom and studio.

Clooney refuses to kitschify the '50s. He doesn't buy into that "it was a more innocent time" crap, the way the overly praised but thimble-deep "Quiz Show" did. So many filmmakers treat the '50s as if it were a kind of theme park populated by clueless moms in aprons and pipe-smoking, jocular dads who were just happy to be home from the war. But "Good Night, and Good Luck" recognizes the challenges that we had to meet as a country as we entered the last half of the 20th century, and we couldn't have stood up to them if we'd been pussies. "Good Night, and Good Luck" is essentially a western, with all the complexities inherent in that largely misunderstood genre. Like the great '50s westerns -- movies made by the likes of Anthony Mann and Budd Boetticher, which served as cinematic markers for the stress points in American life -- "Good Night, and Good Luck" is a story about tough, principled men in a new frontier, forced to make rough choices in situations that aren't always clear-cut. The American news media may disappoint most of us much of the time, but it hasn't come close to reaching the end of the frontier. "Good Night, and Good Luck" suggests that it's boundless.