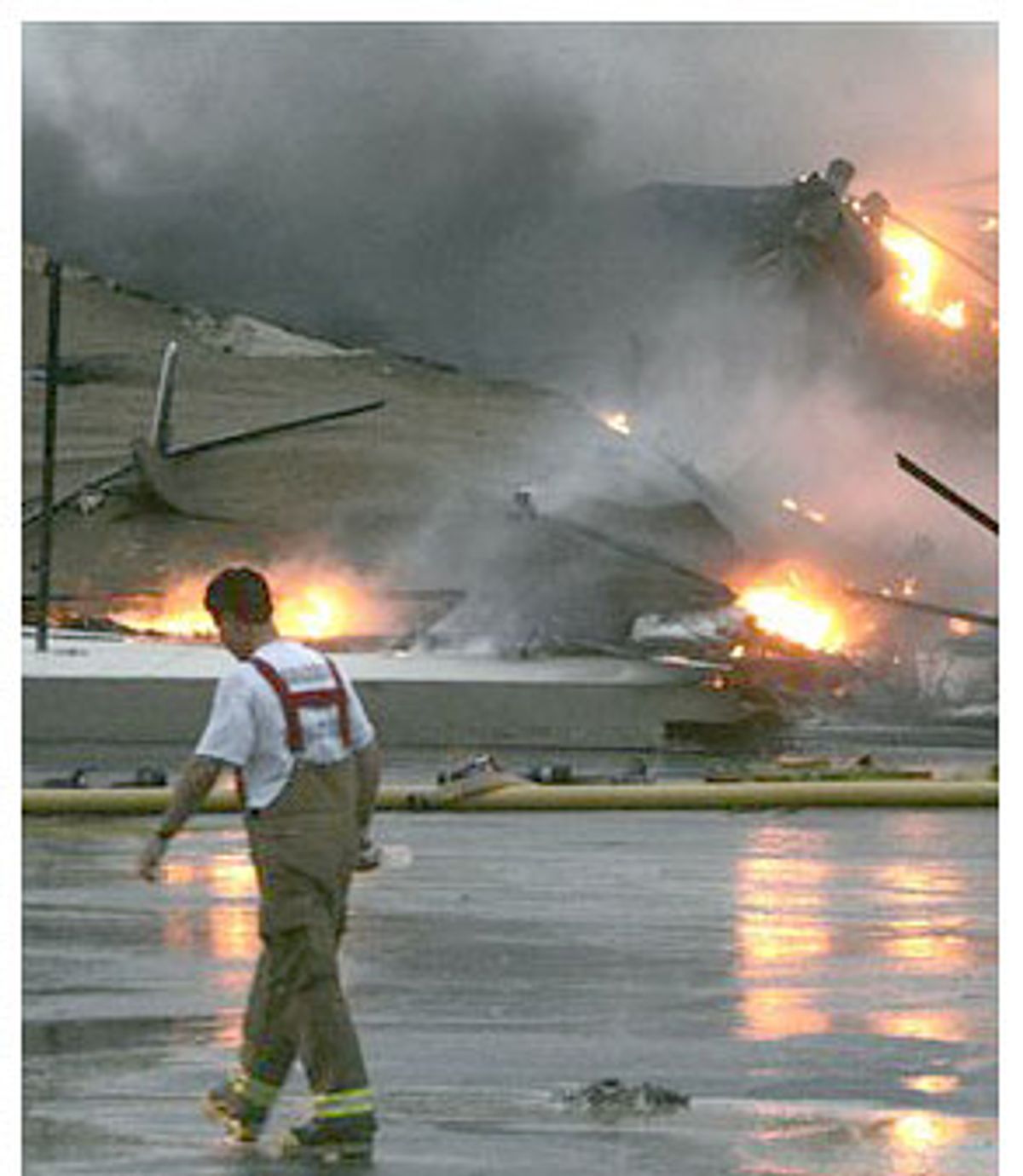 Hurricane Rita plowed into the Gulf Coast early Saturday, lashing Texas and Louisiana with driving rain, flooding low-lying regions, knocking power out to more than half a million people and sparking fires across the region.

Rita made landfall at 3:30 a.m. EDT as a Category 3 storm just east of Sabine Pass, on the Texas-Louisiana line, bringing a 20-foot storm surge and up to 25 inches of rain, the National Hurricane Center said.

Residents in hard-hit western Louisiana called police early Saturday to report roofs being ripped off and downed trees. Rescuers were forced to wait until the winds outside died down to safe levels.

"We can't even get out to check yet," said Sgt. Wendell Carroll of Louisiana's Calcasieu Parish Sheriff's Office. "All we can hear is the wind a' howling."

The storm spun off tornadoes as it churned northwest at 12 mph with winds that topped 120 mph, causing transformers to explode in the pre-dawn darkness.

In Jasper County, north of Beaumont, a house with seven people inside floated in floodwaters after it came off its foundation, said sheriff's communications supervisor Alice Duckworth.

Duckworth said the 30 emergency workers were stuck in the emergency operations center because of flooding. "We can't get any fire trucks out," she said.

But rain from Rita drenched parts of New Orleans on Saturday, straining an already fragile levee system that failed in places on Friday.

The National Weather Service said New Orleans was expected to get spurts of rain dropping 3 to 4 inches per hour. On Friday, hurricane-driven storm surges topped one levee, while another began leaking.

Fires were reported in and around Houston, including one in a two-story apartment building in southeast Houston that left at least eight units damaged, authorities said. Nobody was hurt, according to District Chief Jack Williams. Another blaze broke out before dawn at a shopping complex in Pasadena. There were no immediate reports of injuries.

In a hotel in Beaumont, Texas, near where Rita struck, windows were blown out and shards of glass and pieces of trees were strewn throughout the flooding lobby, KHOU-TV reported.

The junior high school in nearby Warren also lost its roof, and fire -- likely triggered by lightning -- broke out in a pile of logs. "We just let it burn," Sturrock said.

More than 450,000 CenterPoint Energy customers in Texas were without power in the company's service area, which stretches from Galveston into Houston north to Humble, company spokeswoman Patricia Frank said. Energy spokesman David Caplan said about 55,000 of its Texas customers in the storm-affected area were without electricity.

Rita's heaviest rains -- up to 3 to 4 inches an hour -- fell in Lake Charles, La., National Weather Service meteorologist Patrick Omundson said. The town had 8 inches of rain more than two hours before the storm's landfall. Near the coastal town of Cameron, the weather service recorded a wind gust of 112 mph as the storm's center approached.

In Vinton, west of Lake Charles, police could see several building fires from their station and took calls from residents reporting others at homes and businesses throughout town, Lt. Arthur Phillips said.

"It's tore up pretty good," he said. "We've taken quite a beating."

The roof of the town's recreation center was completely torn off, and residents reported businesses destroyed by winds and homes damaged by fallen trees, Phillips said.

The storm brought chaos even far from its path. South of Dallas, a bus of Rita evacuees caught fire in gridlocked traffic, killing as many as 24 nursing home residents who thought they were getting out of harm's way.

In Galveston, about 100 miles away from the storm's eye, a fire erupted in the historic Strand district late Friday. Wind-whipped flames leapt across three buildings. City manager Steve LeBlanc said the blaze could have been caused by downed power lines.

"It was like a war zone, shooting fire across the street," Fire Chief Michael Varela said Saturday.

Officials estimated at least 90 percent of surrounding Jefferson County residents had heeded warnings that a storm surge could submerge swaths of the low-lying county -- including the seawall-and-levee-protected city of Port Arthur, near Sabine Pass.

As the storm raged, the torches of oil refineries could still be seen burning in the distance from downtown Beaumont. Officials worried about the storm's threat to those facilities and chemical plants strung along the Texas and Louisiana coast.

The facilities represent a quarter of the nation's oil refining capacity and business analysts said damage from Rita could send gas prices as high as $4 a gallon. Environmentalists warned of the risk of a toxic spill.

In the days before the storm's arrival, hundreds of thousands of residents of Texas and Louisiana fled their homes in a mass exodus of 2.8 million people that produced gridlock and heartbreak.

Grocery shelves were emptied, gas stations ran out of fuel and motorists had to push their cars to the side of highways after idling for hours in stuck traffic and running out of gas.

Nearly 1,300 patients were airlifted out of an airport near Beaumont in a rush Thursday night and Friday morning, but only after the county's top official made a panicked call to Sen. Kay Bailey Hutchinson for help.

"We had patients throwing up. It was very ugly," said Jefferson County Judge Carl Griffith, who blamed delays on the Transportation Security Administration, which insisted every wheelchair-bound passenger be checked with a metal-detector.

Kandy Huffman had no way to leave, and she pushed her broken-down car down the street to her home with plans to ride out the storm in Port Arthur, where the streetlights were turned off and stores were boarded up.

"All you can do is pray for best," she said as a driving rain started to fall. "We're surrounded by the people we love. Even if we have to all cuddle up, we know where everybody is."

The sparsely populated region was almost completely evacuated, but authorities rushed to the aid of a man who had decided to ride out the storm in a house near the Gulf of Mexico after one of man's friends called for help. They were turned back by flooded roads.

Empty coastal highways and small towns were blasted with wind-swept rain. A metal hurricane evacuation route sign along one road wagged violently in the wind, and clumps of cattle huddled in fields.

Steve Rinard, a meteorologist in Lake Charles, said he could not keep count of the tornado warnings across southern Louisiana. "They were just popping up like firecrackers," he said.

President Bush, mindful of criticism the federal government was slow to respond to Hurricane Katrina three weeks ago, planned to visit his home state Saturday. He will go to the state's emergency operations center in Austin and then to San Antonio.

In Lake Charles, home to the nation's 12th-largest seaport and refineries run by ConocoPhillips, ExxonMobil, Citgo and Shell, nearly all 70,000 residents had evacuated. Several riverboat casinos that mostly serve tourists from Texas also closed ahead of the storm.

"We see these storms a little differently after Katrina," said city administrator Paul Rainwater. "We all realize that no matter how safe you feel ... you have to take it seriously, you have to plan."

Louisiana Gov. Kathleen Blanco said over 90 percent of residents in southwestern parishes, about 150,000 people, had evacuated. For those who had not, she issued a warning: "Get to the highest ground or the highest building in your area."

Some residents of southwest Louisiana headed to a shelter in Lafayette, joining evacuees from Hurricane Katrina who had been there nearly a month.

"I am thankful for my life and that we are all safe," said Blanche Edgarson, 53, of Plaquemines Parish, an area that was devastated by Katrina. "But I'm very depressed, and I don't know where we will go from here."