Brownie points (at others) 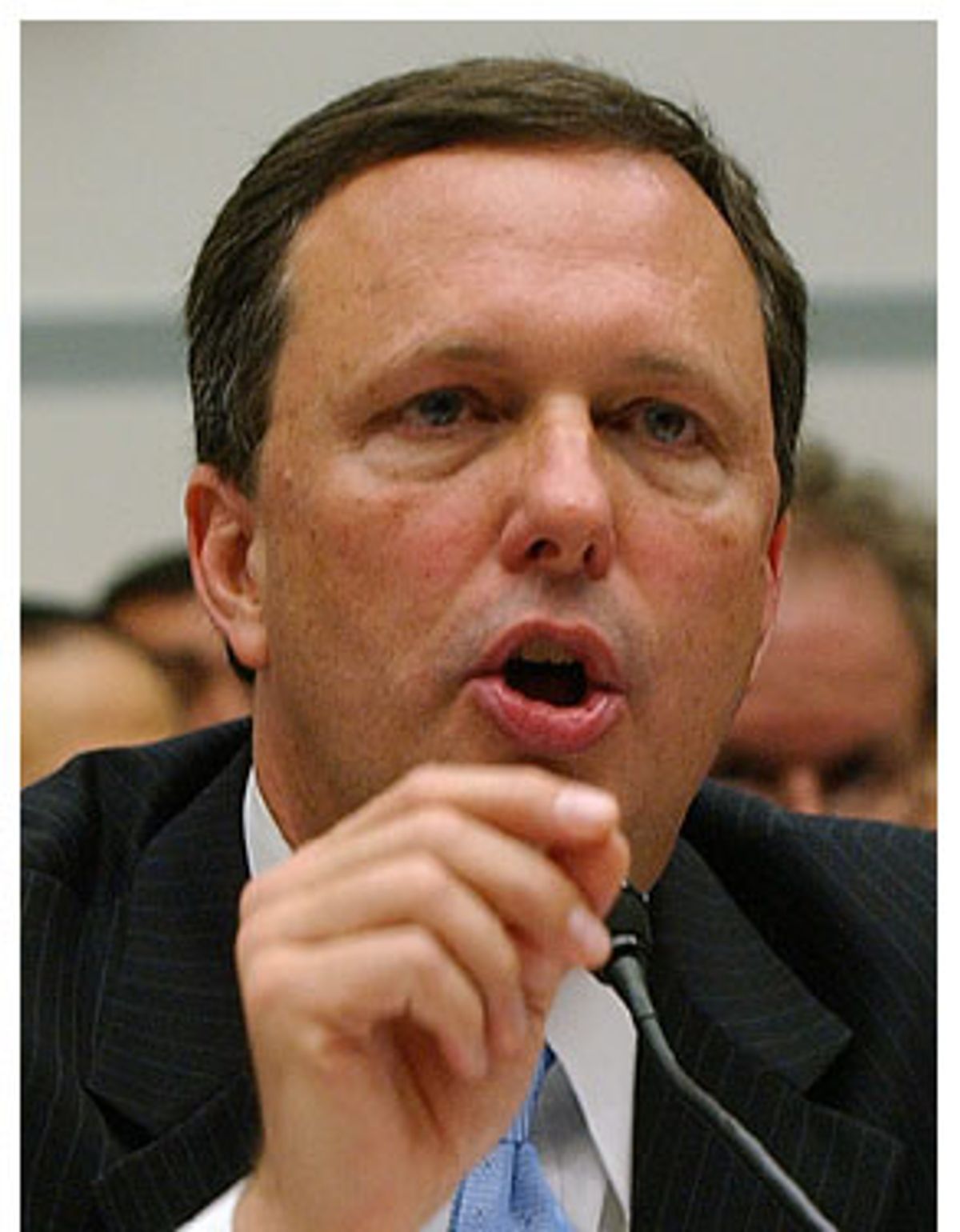 The official inquisition of former FEMA director Michael Brown began just as Democrats had predicted -- with a whitewash. Clearly mistakes had been made after Hurricane Katrina. Thousands had suffered. Others died. But the Republican leadership was not going to place all the blame on one man and his agency of 2,500 employees.

"This is not the movies," said Rep. Tom Davis, R-Va., who chairs the House committee investigating the Katrina response. "There is no Tommy Lee Jones character who comes in and takes charge of everything."

But no one at the hearing seemed to mistake Brown for a tough-guy taskmaster. Sitting Tuesday before the committee in a powder-blue tie, Brown looked more like an overdressed shipping clerk. He had an earnest voice and a plain face. When he became emotional his cheeks flushed and his eyes widened.

In his first public appearance in weeks, he introduced himself by admitting just two mistakes. "First, I failed to set up regular media briefings," he said. "Second, I very strongly, personally regret not being able to persuade [Louisiana] Gov. Blanco and [New Orleans] Mayor Nagin to sit down, get over their differences and work together."

In other words, Brown's only regrets appeared to be the behavior of others. "I don't want to make this partisan," Brown said, delivering the day's most disingenuous line. "I can't help it if Alabama and Mississippi are governed by Republican governors, and Louisiana is governed by a Democratic governor."

It was an inauspicious beginning for a man who lost his job after leading a bungled response to one of the largest disasters in American history. But the defensive crouch did not last. Over the more than five hours of questioning that followed, Brown began to drop his guard. He revealed himself as more than a political crony who once helped judge horse shows. He was, instead, an official well-versed in the details of emergency response, a leader determined to defend the honor of his former employees, and a political ideologue who believes in a limited federal government. But he was also a man tormented by the missteps he had overseen, and as the day progressed, it became clear that he had many more regrets.

Brown admitted, for instance, that he had made a mistake by not asking the military to take over the rescue and recovery operations sooner. He regretted not having a contract in place to handle body disposal. He said he had misjudged the ability of state leaders to handle the response. He admitted to losing track of orders he had given. He said he misspoke when he stated on national television that he had been unaware of the plight of evacuees at the convention center. He said he had misled the American people by declaring in a press conference that Gov. Blanco was running a "tight-knit" team that was "making the right calls."

Brown even began to detail the culpability of the Bush administration, including Homeland Security Secretary Tom Ridge, who had overseen a dismantling of FEMA's resources in recent years. Between 2003 and 2005, Brown said the top brass at Homeland Security had transferred $200 million out of his base operating budget. The White House rejected his appeals for more money, but he had failed to go public with his concerns.

Some of the committee's Republican members were incredulous at Brown's passivity in the job. Rep. Christopher Shays, R-Conn., suggested that Brown was little more than a "good soldier" who stayed quiet when he should have spoken out. "You said, 'I sleep at night because I fought the battle,'" said Rep. Kay Granger, R-Texas, continuing the same theme. "I don't know how you can sleep at night. You lost the battle."

"I'm not as brave as some people say I am," Brown admitted, in a moment of emotional candor. "I probably should have just resigned my post earlier and gone public with some of these things."

With two exceptions, Democrats boycotted the hearing, leaving row upon row of empty leather chairs. Democrats are holding out for an independent commission. In fact, just as Brown's testimony began, several Democrats gathered down the hall before television cameras to demand, again, a new "9/11-style" commission.

"It's like the fox guarding the henhouse," said Rep. Louise Slaughter, in a press release that was sent to reporters. Only Rep. Gene Taylor, D-Miss., and Rep. William Jefferson, D-La., attended the Brown hearing.

Back in the hearing room, Brown spoke of a meeting he had on the Tuesday after the hurricane with New Orleans Mayor Ray Nagin. Following protocol, Nagin had handed Brown a prioritized list of needs for the city of New Orleans. Brown says he handed the list to his deputy in Louisiana, Philip Parr. "I said, 'Phil, feed this into the system. Let's make this happen," Brown remembered. "It's like it went into oblivion."

The system Brown and FEMA were trained to depend on had broken down. George Haddow, a former deputy chief of staff for FEMA during the late 1990s, says that Brown should have done more. "If he has a responsibility, that's his responsibility -- to follow up and make sure things happened," Haddow said, who listened to the hearing on the radio. "He made some promises that were not kept."

Brown's testimony also raised questions about how well FEMA had coordinated its needs with the military. More than a week after the storm, Gen. Richard Myers, the chairman of the Joint Chiefs of Staff, said the Pentagon had "started working issues before we were asked," taking action the day after the storm hit. At the hearing Tuesday, Brown said he still had no idea if the military had responded to the tasking orders he had issued to them.

At other parts of the hearing, Brown defended his view of FEMA as a limited agency that should depend almost entirely on state and local authorities to take action on the ground. FEMA is not a first responder, Brown said, but rather an agency that should coordinate state and local responders. He rejected suggestions that FEMA should have provided more ice to the hurricane-ravaged areas, and said the federal government should not be in the business of providing gasoline to evacuating residents.

He did say that the agency needed to improve its ability to issue contracts and know what was happening in the field, a problem that was due in part to poor government funding. "We know what to do, we know how to do it," Brown said of his agency. "Because we were stretched thin, because we still have these logistical problems, we were overwhelmed." But ultimately, Brown kept returning to the idea that the critical failure took place at the state and local levels.

"Part of what we are seeing is a misunderstanding and a confusion of who does what," Rep. Chip Pickering, R-Miss., said late in the hearing.

Brown's response was muddled. But it sounded like he said, "Amen."