A hybrid of folklore and farce, the latest from the author of "American Gods" unfurls the story of Fat Charlie, a pitiful working bloke who's the son of a trickster god. 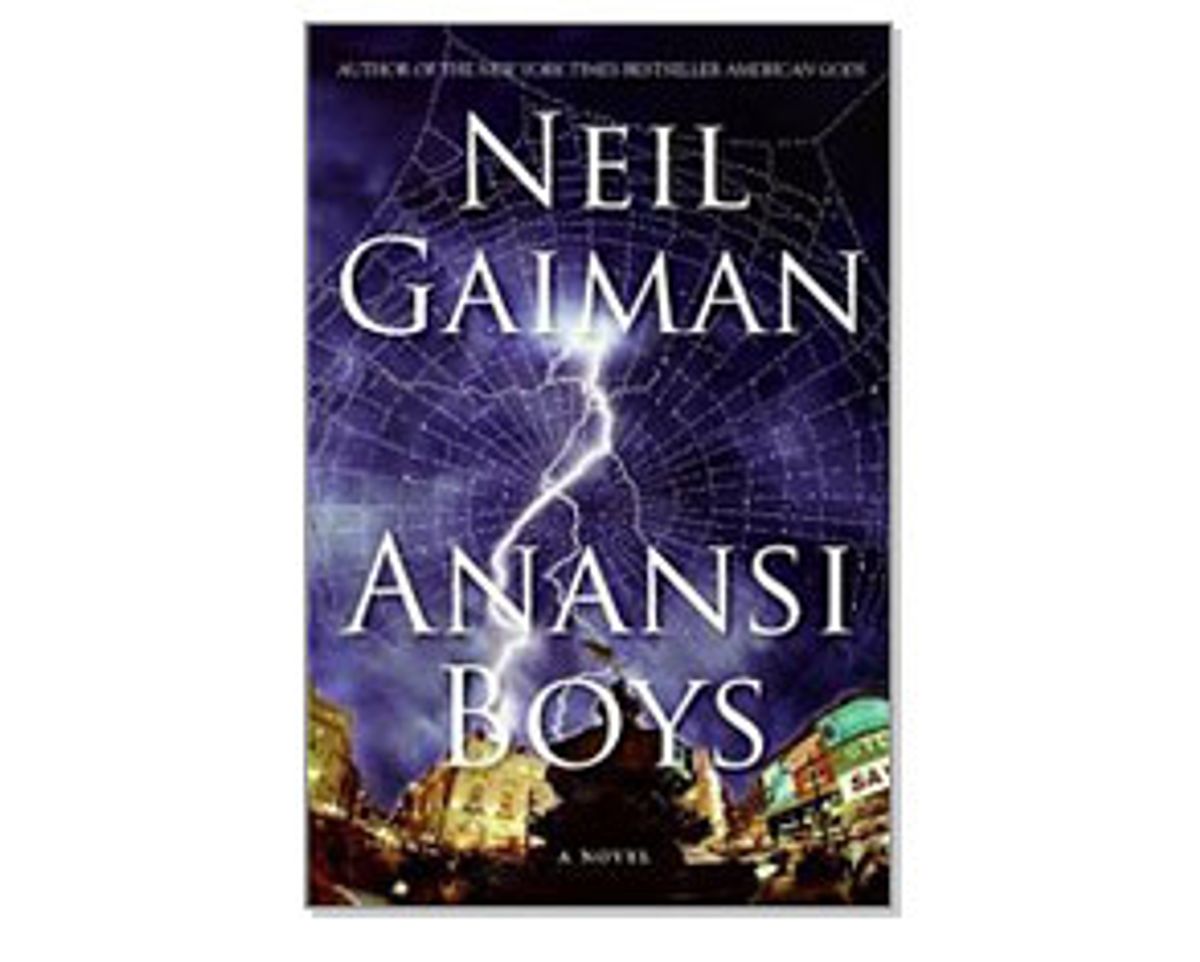 Neil Gaiman's 2001 novel, "American Gods," had an ingenious premise: It's set among the washed-up deities of a motley assortment of defunct pantheons, all of whom have been abandoned by their former worshippers on the shores of the New World. Mesopotamian fertility goddesses resort to turning tricks, and the Egyptian gods of the underworld have to hang out their shingle as embalmers. The conclusions the novel reaches about the mythic roots of America don't quite convince -- perhaps because Gaiman is a British expat -- but the noir road trip that gets you there is a blast all the same.

"Anansi Boys," Gaiman's latest foray into the same fictional milieu, is a more modest and also a more fully realized book. That's because it takes full advantage of the author's great gift: his ability to blend the archetypal elements of myth and folklore with the grit and comedy of everyday life. His characters never stop wrangling with real-world problems -- infuriating relatives, crappy jobs, rickety love lives -- even when they stumble into some very strange and cosmic situations. The poor slob this time around is one Charles Anansi, a sweet but easily mortified nebbish trying to eke out a humble existence as an administrative worker in London. He's been saddled with the (unfitting) nickname of Fat Charlie by his charming rascal of a father, a supporting character in "American Gods" and -- unbeknownst to Fat Charlie -- also the West African and Caribbean trickster god Anansi.

In the course of the novel, Fat Charlie will learn that he has a much cooler brother, Spider, who has inherited all of Mr. Anansi's powers and prankish habits. When their father keels over dead in a karaoke bar, Spider descends upon his brother's tidy life and becomes the houseguest from hell, moving in on Fat Charlie's fiancée and stirring up trouble at work. Fat Charlie enlists the help of some aged ladies in the family's former stomping grounds in Florida, and winds up invoking menacing, unpredictable entities who soon turn out to be even more destructive than Spider.

"Anansi Boys" is a hybrid of folk tale and farce that freely partakes of the comic wealth in each, slipping effortlessly back and forth between them. One particularly vivid scene has Fat Charlie (courtesy of the old ladies' magic) walking along the mountains at the end of the world (or the beginning of it, depending on which direction you're coming from), where he visits a series of caves inhabited by archetypal animal-people: Lion, Monkey, Elephant and, his father's nemesis, Tiger. "These mountains and their caves are made from the stuff of the oldest stories," Gaiman writes, and he conjures a primal, rocky landscape that does justice to the claim.

Sprinkled throughout are some of the traditional Anansi tales (Zora Neale Hurston, who collected such folklore, is one of the people thanked in the dedication), balanced by a contemporary crime story concerning Fat Charlie's larcenous boss. The boss is an avatar of Tiger, who embodies the truly predatory as opposed to Anansi's naughtiness. "The meaning of life," Tiger explains to Fat Charlie outside his cave, "is the hot blood of your prey on your tongue ... It's a big serious world out there; nothing to laugh about. Not ever. You must teach children to fear, teach them to tremble. Teach them to be cruel." Mulling this over, Fat Charlie decides that what troubles him most is "not that Tiger was mad; it was that he was so earnest in his convictions, and that all of his convictions were uniformly unpleasant."

Anansi, by contrast, is the spirit of play, of jokes and songs and of course of stories. "Anansi Boys" is Gaiman's tribute to that trickster spirit, as nimble and resourceful as his own imagination.