Bush's nomination of Harriet Miers, a loyalist with a mediocre r 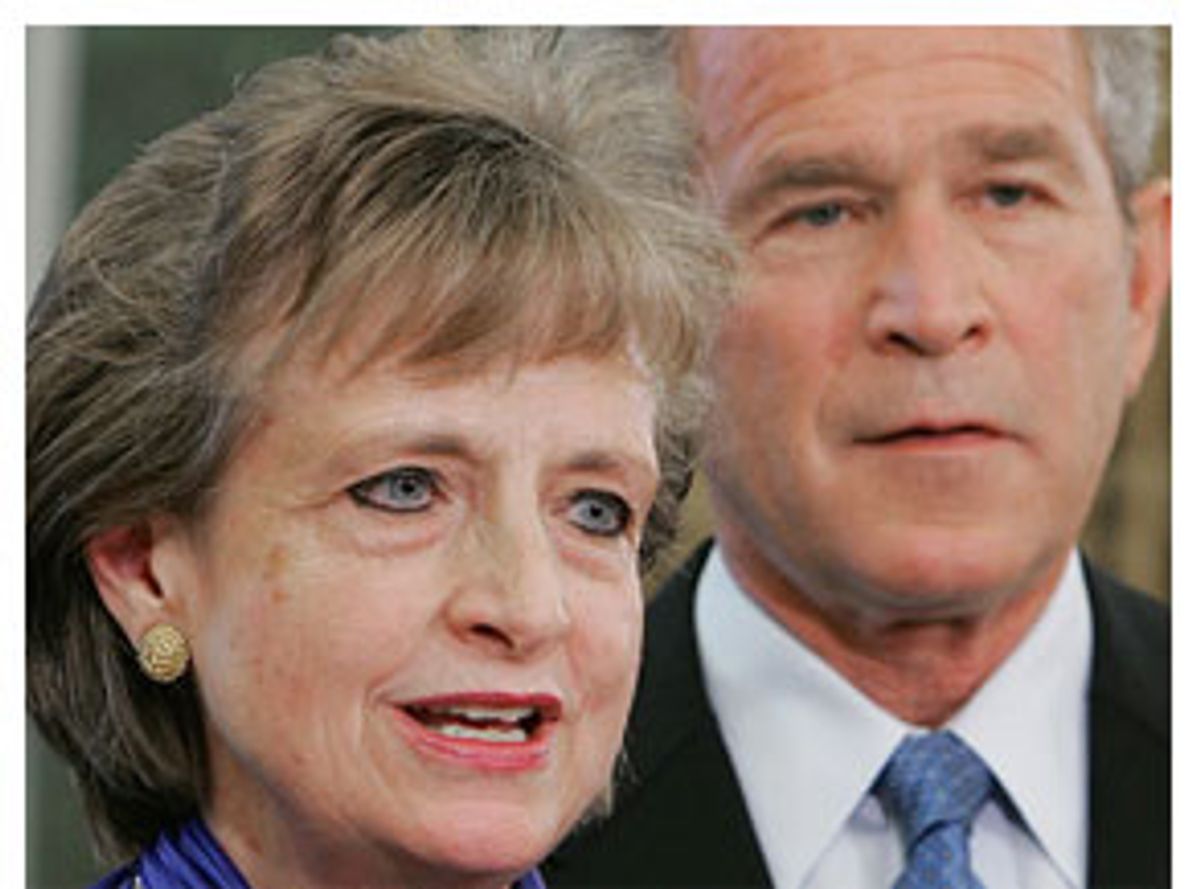 It was supposed to be a day of celebration, a time for conservative activists to finally claim victory in the great battle for the Supreme Court. They had waited decades to replace swing-voter Sandra Day O'Connor with a justice who could definitively shift American legal thought to the right. They had elected a Republican Senate and a Republican president, a man who claimed to favor the thinking of ideological revolutionaries like Justices Antonin Scalia and Clarence Thomas. They had suggested their list of preferred nominees, a who's who of right-wing legal thinkers that included women, Hispanics and African-Americans.

Then President Bush appeared in the Oval Office Monday morning to announce that he had chosen, instead, to replace O'Connor with his own lawyer, a former lottery commissioner from Texas named Harriet Miers.

A few hours later, dozens of conservative activists called into a teleconference organized by Manuel Miranda, a former Republican Senate aide who now runs the Third Branch Conference, a coalition of organizations that supports conservative judicial picks. The callers, including some of the leading lights of the right wing, gnashed their teeth and vented their frustrations, according to several participants. It was no victory party.

"I am not ready to bring out the pom-poms and start the cheering. I was hoping I could," Jan LaRue, chief counsel of Concerned Women for America, said after the call had ended. "I think a lot of great résumés were set aside here, and I am not sure for the right reason."

Miranda predicted that several conservative groups will eventually announce their opposition to Miers on the basis of her thin public record, while others will refuse to actively support the nomination. "More than anything, you will see many groups sitting on the sidelines," said Miranda, who previously worked as an aide to Senate Majority Leader Bill Frist, R-Tenn. "I think ultimately the president was very ill-served" by his advisors.

The nomination of Miers, Miranda added, sends a clear message that any conservative who wants promotion to the highest court must skirt the spotlight and be careful not to create a paper trail. "Because of this decision, a conservative woman today would be well advised, if she wants to sit on the court, never to write a controversial opinion," he said. "There is still a glass ceiling for conservative women in this country."

That message directly attacked one of President Bush's public rationales for choosing Miers. Bush used the phrase "first woman" five times in his nomination announcement, pointing out that Miers, 60, had blazed a trail for women in the male-dominated world of corporate law in Texas, eventually becoming president of the State Bar in 1992. Shortly after that achievement, Miers began working for the nascent gubernatorial campaign of George W. Bush. After his election in 1994, Miers continued on as Bush's personal attorney until he appointed her to head the Texas Lottery Commission. She later followed Bush to the White House, where she held several jobs, and was tapped in 2004 to become White House counsel.

Throughout her career, however, she has had little public involvement in constitutional law. This is in marked contrast to the president's last nominee, Chief Justice John G. Roberts, who was widely seen as one of the nation's most accomplished constitutional minds, having argued 39 cases before the Supreme Court. "These hearings are going to be a stark contrast to the Roberts hearings," said Roger Pilon, director of the Center for Constitutional Studies at the Cato Institute, a libertarian think tank. "Can you picture her answering some of the questions that Roberts was asked?"

Pilon spent Monday searching for published scholarship by Miers, but he found only two articles -- in Texas Lawyer, a trade magazine. One article concerned the challenges of merging corporate law firms. "Does that sound like the stuff of a Supreme Court justice?" Pilon asked, suggesting that Miers will have a far more difficult time than Roberts during her confirmation hearings. "Over 60 years, she has written almost nothing, and shows no involvement in the raging jurisprudential debates of the day."

Although a surprise to some, Miers name had been widely circulated last week as a possible replacement for O'Connor. Nan Aron, the president of the Alliance for Justice, said Miers' file was the only one she had taken with her on a weekend trip to New York. Some Democrats, like Senate Minority Leader Harry Reid, D-Nev., expressed relief at Miers' nomination. His spokesman, Jim Manley, told Salon that Reid had suggested Miers name to the president as a possible nominee, though without any promise of support.

Aron is withholding judgment, awaiting more records that would shed light on Miers' legal philosophy. She's not convinced by the public collapse of a united front on the right based on the notion that Miers is too moderate a nominee. "It's hard to know what to make of some of the statements coming from some of the extreme, radical-right groups," Aron said.

But more information on Miers' personal views is not likely to be forthcoming. It was Miers, after all, who denied, as White House counsel, similar requests by Democrats to release memorandums written by Roberts during the administration of George H.W. Bush. This time, some groups on the right will be joining Aron in calling for more transparency regarding the nominee's judicial philosophy.

"Our lack of knowledge about Harriet Miers, and the absence of a record on the bench, give us insufficient information from which to assess whether or not she is indeed in that mold," announced Tony Perkins, president of the Family Research Council, in a press release. "We will be watching closely as the confirmation process begins."

Such reticence from the president's base sent the White House and its allies scrambling Monday to control the political fallout. The president's outside supporters made the rounds trying to buck up the spirits of conservative activists. "Some social conservatives don't know her," said Jay Sekulow, chief counsel of the conservative American Counsel for Law and Justice, in an interview. He said that the tide had begun to turn in the late afternoon, with more conservatives showing their support. "When they get to know her over the coming weeks, I think they will be very pleased," he said.

By midday, Vice President Dick Cheney even called into Rush Limbaugh's radio show to offer assurances. "You'll find when we look back 10 years from now that it will have been a great appointment," Cheney told Limbaugh and his millions of listeners. "You'll be proud of Harriet's record, Rush. Trust me."