"The Squid and the Whale"

Noah Baumbach returns with this intelligent, but ultimately detached, picture of a family falling apart. 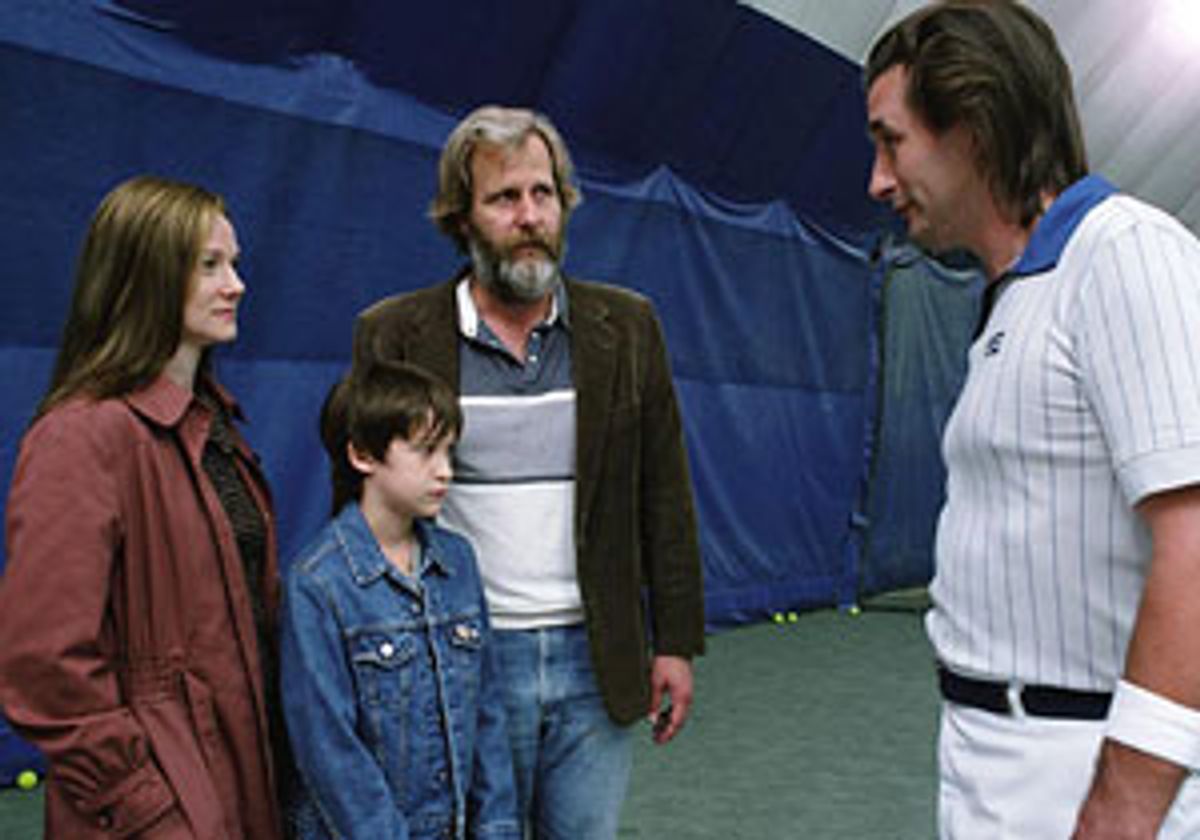 Noah Baumbach's "The Squid and the Whale" has so much going for it -- including intelligent performances that mesh beautifully, and a keen understanding of how seemingly small moments can rattle the foundations of families -- that you walk away from it feeling it should add up to more. Baumbach (interviewed by Salon when the movie debuted earlier this year at Sundance) freely admits that the story, about two boys dealing with their parents' divorce in '80s-era (which is to say, pregentrified) Park Slope, in Brooklyn, N.Y., is semiautobiographical, and many of the movie's details are so meticulously observed that it's easy to believe Baumbach lived them.

But some of the movie's details may be too meticulously observed: "The Squid and the Whale" often feels a bit too fussed over, laying out its family rivalries and misunderstandings with the kind of clarity that comes from hindsight (or therapy). Sometimes we feel as if we're looking at a family behind glass -- albeit smudgy glass -- instead of living with them in the moment.

Baumbach is an intelligent, attentive filmmaker, and one whose work we don't get to see often enough. (He has directed two previous features, "Kicking and Screaming" and "Mr. Jealousy," both with strong subcurrents of wit and energy, and he co-wrote, with Wes Anderson, the more obsessively self-conscious "The Life Aquatic With Steve Zissou." ) Here he seems to be fighting contradictory impulses. "The Squid and the Whale" has the odd distinction of coming off as both heartfelt and cautiously remote.

But at least Baumbach hits the mark when it comes to working with his actors. Jeff Daniels plays Bernard Berkman, a has-been novelist and academic who's the father of teenage Walt (Jesse Eisenberg) and the younger Frank (Owen Kline, in a perceptive performance that allows no room for cuteness). Mom is Joan (Laura Linney), who, having spent most of her marriage as a mother and helpmate, has now begun writing herself.

Baumbach sets up the blood dynamic in the movie's opening scene: During a family tennis game, Bernard urges Walt to target his mother's weak backhand. It's the kind of benign aggression that Bernard specializes in, and although his mean-spirited arrogance is apparent, and somewhat repulsive, to us, Walt idolizes him. Frank is more in tune with his mom, but even before the parents announce that they're splitting, he shows a few mild behavioral problems: He puts a cashew up his nose at dinner one night. After the breakup, he alarms authorities at his school when they realize he's been furtively masturbating in the library and smearing the ejaculate on books.

Bernard works out a crazy, elaborately scheduled joint-custody scheme, but the family nevertheless splits, like a cut apple, into two neat halves. The sullen Walt holds his mother responsible for the bust-up (she'd been seeing another guy) and decides to live in the crummy house his father has moved into. (Its sparse decor includes a poster for director Jean Eustache's epic of sexual angst, "The Mother and the Whore.") The anxious, sensitive Frank drifts back to stay with his mom. In its best moments "The Squid and the Whale" cuts to the essence of the crap kids have to go through in attempting to understand their parents' problems, even as they're wrestling with not-inconsequential problems of their own. Walt, for example, is a smart, good-looking kid, but we can see how Bernard has shaped him by bad example and with lousy advice. Walt finds a lovely girlfriend (she's played by the exceedingly charming Halley Feiffer), but Bernard advises him, with his usual know-it-all bluster, that he shouldn't limit his options, that he should play the field while he's young. We cringe when Walt kisses her for the first time, and then offers a crushing criticism that he himself obviously doesn't understand: "I wish you didn't have so many freckles on your face."

Some teenagers are lovely by nature, but many need to learn not to be assholes -- everybody knows that, but almost nobody comes out and says it, and it's a point that's not lost on Baumbach. Walt is the most opaque character here, maybe partly because the first half of the movie focuses on the more immediately likable, and more overtly fragile, Frank. But in the movie's second half, we feel more for Walt, even if we never actually grow to like him: Baumbach's writing of the character, and Eisenberg's interpretation of it, begin to breathe in the last few scenes of the movie.

And as Walt becomes more aware of his dad's flaws, we begin to feel more for him, too: Daniels shapes his character gradually, and with extremely perceptive choices. We roll our eyes when he proudly shows young Frank the desk he's set up for him in the new house (it's one of those old-fashioned schoolhouse jobbies, a chair with a tiny flat surface attached to one arm). But later, Daniels shows the fissures of insecurity and doubt that run deep and wide in this man. As Daniels plays him, Bernard has the eyes of a rescued dog who has never forgotten what the pound was like. This is a character you wouldn't want to be married to if he were the last man on earth -- and still, you feel something for him.

"The Squid and the Whale" -- its title comes from Walt's recollection of a natural-history-museum exhibit that terrified him as a kid -- strives for the right balance of humor and gravity. And maybe, in the end, balance is the thing it just has too much of -- it's a sincere, detached picture.

And yet Baumbach hits a few killer bull's-eyes: In a late scene, the confused Frank, left alone for a weekend after his dad forgets to pick him up, riffles through his mother's underwear drawer and lays out her bra and panties on the bed, a lovely, fleeting homage to Louis Malle's "Murmur of the Heart." And in an earlier moment, just after Joan and Bernard have told the kids they're going to separate, Joan creeps into Frank's room at night with a stack of books, which she tucks under his bed. When Frank asks her what she's doing, she explains that these are her books -- she paid for them -- and she doesn't want Bernard to pack them up and haul them away as if they were his. It's a wonderful, wrenching touch, a way of recognizing the way books sometimes seem like the only way we have of truly defining ourselves. Baumbach is wholly alive to moments like that, and to the ways kids can be willfully clueless when it comes to seeing their parents as human beings. "The Squid and the Whale" isn't about laying blame; it's about recognizing that no matter how much we think our parents have disappointed us, it's often nothing compared with the disappointment they feel in themselves.