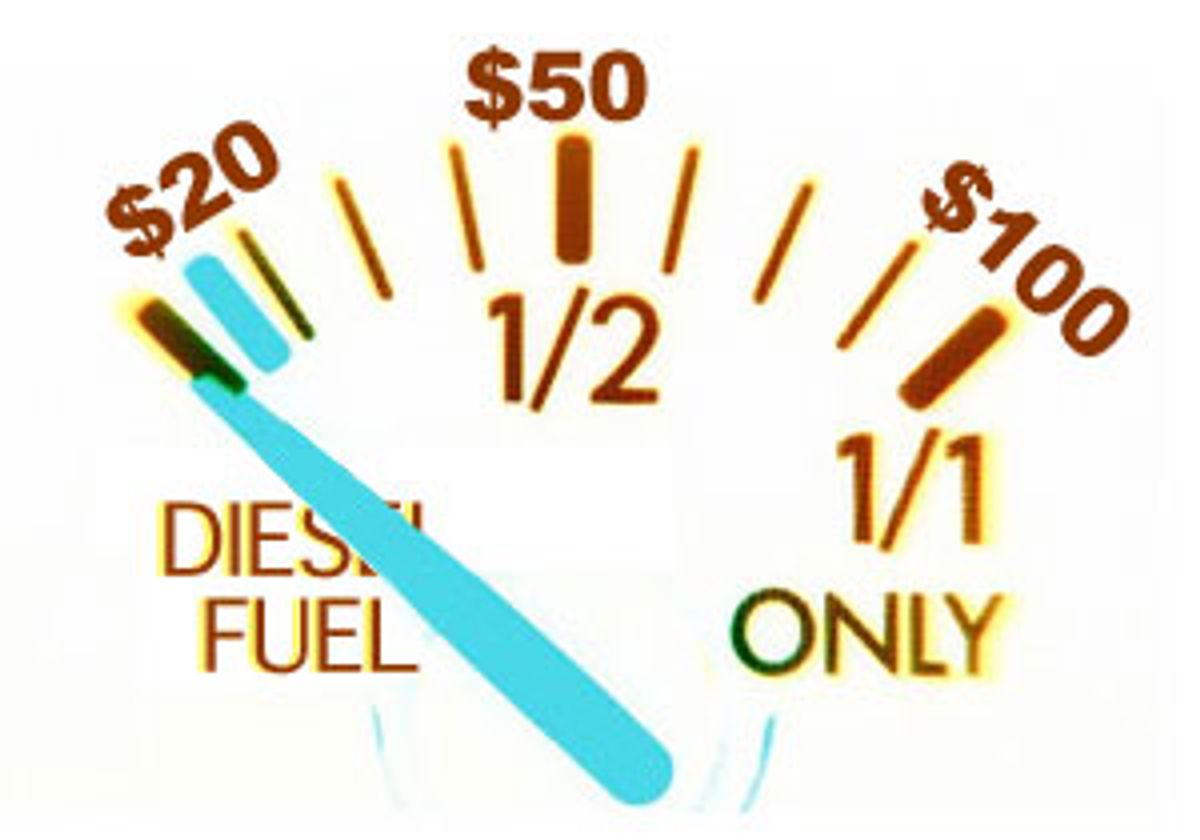 If Americans are hurting from $3 gasoline, wait till they feel the pain of $4, or even $5, diesel fuel.

We'd better get ready, because it's probably on the way. On Monday, the price of diesel reached an all-time high of $3.21 per gallon, and that may be just the beginning of a long-term rise. Over the next 18 months or so, parts of the country could be seeing shortages of certain diesel blends, and the resultant price spikes. And that means more bad news for American consumers. America's economy runs on diesel; nearly 80 percent of U.S. communities get their goods solely by truck. As diesel prices go up, so will prices for goods at Quickie Pickie, Wal-Mart, and practically every other commercial outlet. Right now, most Americans are focused on sticker shock at the gas pump, but higher diesel prices will mean higher prices for many things we buy, from bananas and Starbucks coffee, to newspapers and orange juice.

Alas, we can't blame Hurricanes Katrina and Rita for the looming price spike. Although 10 refineries (accounting for about 14 percent of domestic capacity) remain shut down from the storms, the coming diesel disaster will be caused by several other things that have nothing to do with the weather. Those factors include stringent new federal regulations on sulfur content in motor fuel, a global shortage of refining capacity, and soaring demand for diesel, both in the United States and around the globe.

Beginning next year, American refiners must comply with the biggest change in federal motor-fuel regulations since leaded gasoline was banned three decades ago. In January, refiners must cut the amount of sulfur in their gasoline from 90 parts per million to 30 ppm. And by next June, refiners will have to reduce the amount of sulfur in their diesel from 500 ppm to 15 ppm. These rules were designed to improve America's air quality. And while they may benefit the environment, the rules are coming into play at a terrible time for the refining industry and will thus help propel prices higher across the board for both fuels.

The primary reason for the higher prices is simple: The mandates add more complexity to the supply chain. Last year, American refineries produced 45 blends of gasoline. Add in the new requirements from the recently passed energy bill, which requires more ethanol to be used in gasoline, and those 45 blends could easily become 50 or more. Each of those blends requires segregation while being shipped, stored and sold. The same goes for diesel, where the more volatile market will be in ultra-low sulfur diesel (ULSD). While refiners are producing the ULSD, they will also be producing conventional diesel that meets the old 500 ppm standard. Thus, the ULSD will have to be segregated from the conventional diesel.

Add in state-specific blends of diesel, and the situation gets even more complex. California, Minnesota and Texas are all implementing regulations that will require specific diesel blends for their states. (For instance, Minnesota is requiring refineries to add 2 percent biodiesel to their product). Between these boutique diesel blends and ULSD, the industry will require more tanks and more pipes. That means more capital investment, which means higher costs.

Although the EPA has projected that the ULSD rules will add just 5 to 6 cents per gallon to the production cost of diesel fuel (and 6 to 7 cents for consumers), the truth is that no one can predict how the new rules will affect a volatile motor fuel market -- one that has been repeatedly spooked by fears of storms, shortages and sharply higher crude prices. Some economists and motor-fuel traders say they are expecting prices to fall in early 2006. They point to the recent downward trend in crude oil prices to support this position.

But the supply of crude oil is only one factor; the bigger problem may prove to be the demands the new rules will place on the refining and fuel-delivery infrastructure. Big consumers of diesel are already worried about the effect of the new low-sulfur regulation. "It's going to exacerbate shortages in an already tight market," says Tavio Headley, staff economist at the American Trucking Associations, an industry group located in Alexandria, Va.

Refiners are busy trying to figure out how to comply with the rules. In May, Colonial Pipeline, a major shipper that carries refined products from the Gulf Coast to the East Coast, said that it would not accept any ULSD for shipment that contains more than 8 ppm sulfur. Colonial's mandate is the result of tests showing that each time ULSD gets moved from one shipper to another, the sulfur content increases. That stands to reason: the same pipes and tanks that will carry ULSD will also carry jet fuel and heating oil, which may contain up to 3,000 ppm of sulfur.

One refinery official who works at a big plant on the Houston Ship Channel, who requested anonymity because he is not authorized to talk to the media, said that in order to deliver diesel to the pipelines at 8 ppm, the diesel leaving his refinery would have to contain -- at most -- 6 ppm of sulfur. Going from 500 ppm down to 6 ppm is a reduction of about 99 percent, and getting all that sulfur out is expensive. It requires additional hydrotreaters, which require refiners to make huge quantities of hydrogen. And making that hydrogen also requires additional equipment. The new mandates are pushing "all the compliance issues back to the manufacturer," the refinery official said. "So whatever slop happens downstream, like sulfur contamination from pipelines or tanks, the refiner has to deal with. It's simple: Manufacturing costs have to go up."

Domestic refineries like the one on the Ship Channel are now running at about 95 percent of capacity. Adding new capacity to manufacture more gasoline or diesel will take years. Recently, the Financial Times reported that by 2007, America may need to import as much as 300,000 barrels of diesel per day in order to keep pace with demand. And while President Bush recently called for new refineries to be built in America (no new ones have been built since the 1970s), the permitting and construction process for a new plant takes years.

Foreign refiners won't be able to help. While Americans are decrying high gasoline prices, those prices would be far higher if not for foreign refiners. The United States is now importing about 1.4 million barrels of gasoline per day to meet demand. But it's unlikely that foreign refiners will be able to supply enough diesel -- particularly of the low-sulfur variety -- to help meet rising U.S. demand. That's because the EPA's new standards are far more stringent than those in Western Europe, a leading consumer of diesel. Furthermore, the entire European market currently has a shortage of diesel-refining capacity.

Then there's the problem of demand. Over the past few years, demand for distillate fuels (diesel, jet fuel and heating oil) in the United States and other Western countries has soared. Since 2000, diesel consumption in Western Europe and the United States has jumped by 20 percent. (By comparison, consumption of gasoline in those same regions has risen just 5 percent.) And it appears that demand for diesel will continue to surge. American and foreign automakers are adding lots of new diesel vehicles to their product lines in order to take advantage of their better fuel efficiency. As those new cars get on American roads, they will add further demand to the already tight diesel market.

All of these factors will contribute to the looming spike in diesel prices. But there is a wild card: The Bush administration can choose to delay enforcement of the rules. In fact, it did just that when it suspended enforcement of federal clean air rules on refineries after Katrina and Rita hit. The move was done to ensure an adequate supply of motor fuel after Katrina struck.

But delaying the new ULSD rules would be no silver bullet. The companies that manufacture big diesel engines are already retooling their products so that they can use ULSD. While the new truck engines will be able to burn the older higher-sulfur diesel, their fuel efficiency may suffer. It may also mean higher maintenance costs for owners of the new trucks.

At this time last year, diesel was selling for about $2 per gallon. Today, prices are well over $3 per gallon. And given the new regulatory scheme, that upward trend is likely to continue -- particularly if the Gulf of Mexico gets hit by another storm, or we have an extraordinarily cold winter.

Welcome to the world of tight refining capacity and high motor fuel prices. We'd better get used to it.