As conservative opposition to his Supreme Court nominee stiffens, Bush faces the prospect of a humiliating defeat. 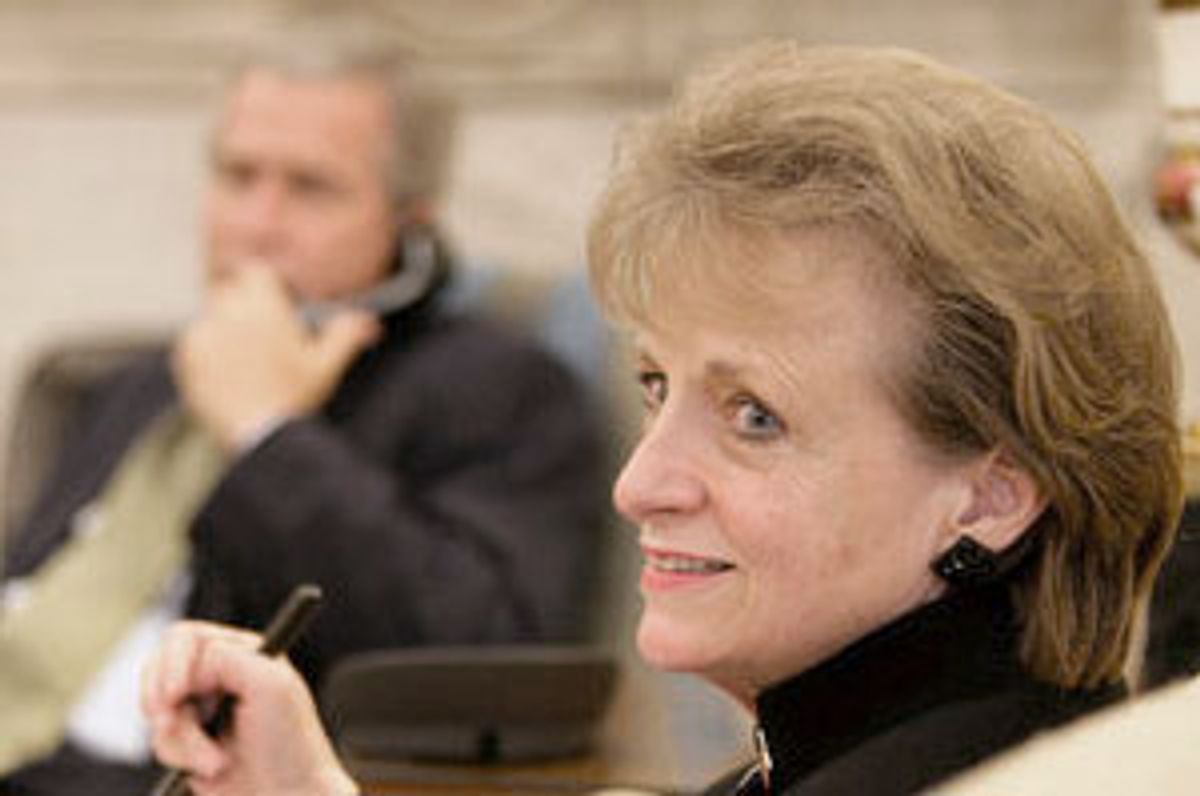 At a Rose Garden news conference last week, President George W. Bush displayed little understanding of the political storm facing his second Supreme Court nominee, White House counsel Harriet Miers. "The decision as to whether or not there will be a fight is up to the Democrats," Bush told reporters. "They get to decide whether or not the special interests will decide the tone of the debate."

The president had it exactly backward. With only 44 seats in the Senate, Democrats have the ability to carp and grandstand, but they have no real power to defeat a nominee, barring the nomination of an ideological zealot who would rally support for a filibuster. Rather, it is the Republican senators and the right-wing special interests who have the power to defeat the president's nominee. And the early signs do not look good for the White House.

Eight days after the nomination, conservative opposition to Miers continues to grow. The initial effort by the White House to spin her as a loyal dark horse has met an increasingly angry responses from the GOP base. "I am just inundated with e-mails and faxes on the subject. I am at the point where I wish e-mail was never invented," said Marion Edwyn Harrison, the president of the conservative Free Congress Foundation. "The largest single group is negative. The next largest group is let's-wait-and-see. But much of the let's-wait-and-see is quite skeptical. The smallest is affirmative."

Republican pundits -- from George Will to William Kristol -- are united in calling for the nomination's withdrawal. Republican senators who recently tried to discourage substantive questioning of Justice John G. Roberts Jr. are now demanding answers from Miers. Leading conservative activists, who said last week that they were resigned to Miers' confirmation, now call her nomination doomed. They are privately sending the message to Republican Senate staff that much of the GOP grass roots will stay home from the polls in 2006 if she reaches the bench.

"I think she is unconfirmable," said Manuel Miranda, a former judiciary aide to Senate Majority Leader Bill Frist, who runs the Third Branch Conference, an umbrella group for conservative activists. "Republican senators are now faced with a real question of advice and consent. They recognize that what is at stake implicates the very issues that are implied by the advice and consent clause, which are cronyism and qualifications."

On Monday, Concerned Women for America, a conservative, evangelical women's group, released a briefing memo that all but rejected the rationale the White House and its supporters have used to promote Miers. "We do not believe we have learned anything more about Miss Miers that justifies endorsement," wrote Jan LaRue, the group's chief counsel. She then specifically rebutted the claim of White House advisor Ed Gillespie that Miers' opponents were elitist or sexist. "Nothing could be further from the truth," she wrote. She also rebutted claims by other White House allies that Miers' religion, sex or lack of judicial experience qualifies her for the court. "We find it patronizing and hypocritical to focus on her faith in order to gain support for Miers," LaRue wrote.

In some corners, conservatives have begun to focus on what they see as a split within the White House that has sidelined the more ideological forces. Activists who have worked closely with the White House said they believe Karl Rove, the White House advisor most in touch with the base, and even William Kelly, the deputy White House counsel, have been distracted by the ongoing Plame leak investigation. This distraction allowed more moderate advisors, like Chief of Staff Andy Card, to hold sway over the president's thinking. (The White House press office did not return calls for comment.)

"The ethics issues are a big part of it. They have had a lot put on their plate," said Richard Viguerie, a conservative activist and direct mail consultant who is opposing Miers. "They just did not understand how important the court is to the base of the party."

Last week, Viguerie said, he believed that there was no way to stop the Miers nomination. He now says the odds are even that she will be withdrawn or defeated. "People are mad," he said of the conservative base. "They feel they have been insulted."

Not all conservatives agree that there is a crisis. Grover Norquist, a conservative activist with close ties to the White House, says a judicial nomination is not likely to sway votes, either those of a senator or those of the Republican base in 2006. "This is a disappointment for a lot of people. It's not an act of treason," Norquist said. "Raise taxes or go steal people's guns, that endangers 2006."

Democrats in the Senate, meanwhile, are patting themselves on the back for their good fortune. Not only did they get a nominee who may turn out to be more moderate than some of the candidates they had feared, but they are now watching the GOP base, which usually marches in lockstep with the party leadership, splinter into acrimonious factions. "I can't find enough popcorn," said one Democratic staffer who works on judicial selection.

At the Democratic Senatorial Campaign Committee (DSCC), the staff is paying particular attention to the effect the Miers fight will have on two races, the reelection campaigns of Sen. Mike DeWine, R-Ohio, and Sen. Rick Santorum, R-Pa. DeWine has said he expects Miers to be confirmed, while Santorum says he looks forward to reviewing her credentials. "If the conservative backlash continues, senators like DeWine and Santorum will be forced to choose between conservatives and George Bush," said a senior aide at the DSCC.

Conservatives have also complained about how the sloppy introduction of Miers has given the Democrats ammunition. Last Thursday, the chairman of the Republican National Committee, Ken Mehlman, told a private conference call of GOP supporters that Miers' understanding of the War on Terror from working in the White House would be an asset she would bring to the bench, according to several accounts of the call. On the same call, Richard Land, a leader of the Southern Baptist Convention, suggested that Miers would rule the way the president expected her to rule. In a recent radio interview, James Dobson, the founder of Focus on the Family, suggested that he had received private assurances from the White House about her judicial views.

All of these views will give Democrats an avenue to question Miers' independence during the confirmation hearing, which is expected to be scheduled for November or December. But one former administration official who worked on judicial selection said that Democrats might choose to temper their criticism, given the win-win a Miers confirmation provides. "It leaves the right defeated, demoralized and disinclined to come out in 2006," the official said. "And she is certainly a better bet than some people."