This well-acted moral melodrama can't quite outrun the grinding wheel of formula. 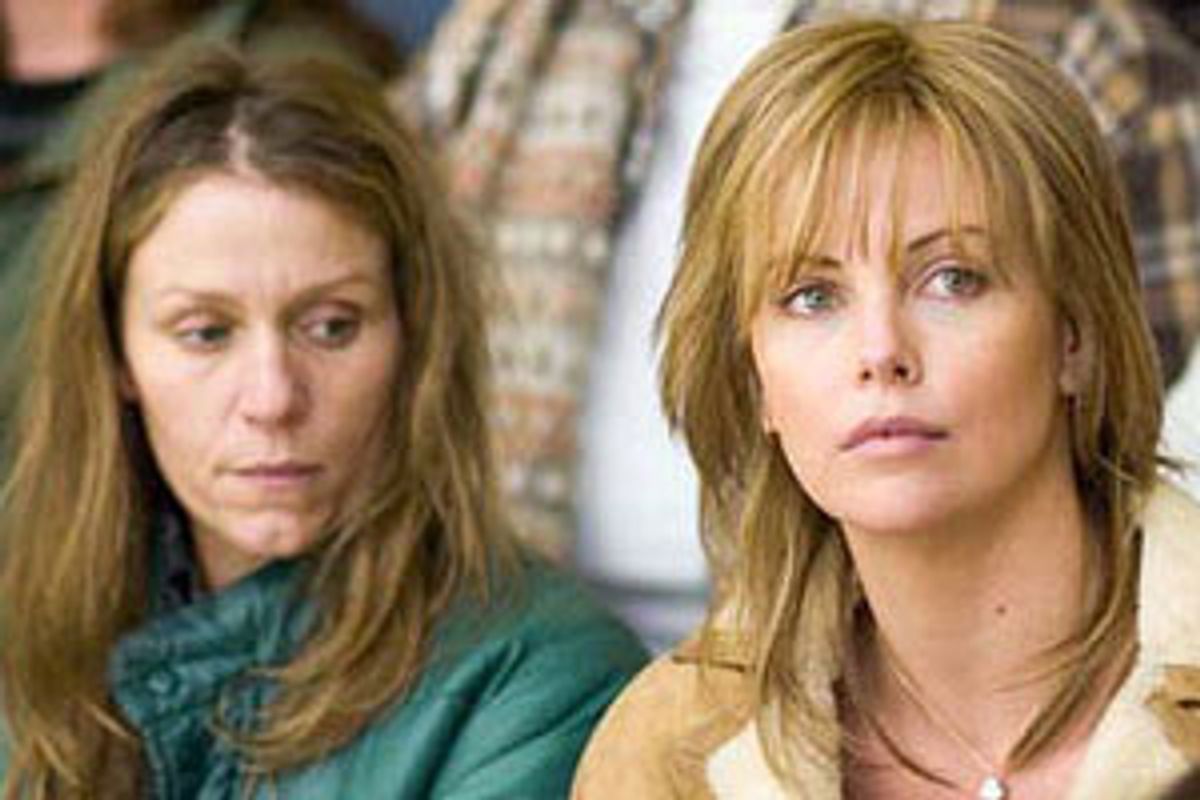 If Hollywood producers insist on continuing to make big, achingly earnest pictures about salt-of-the-earth working people and their struggles, they could do a lot worse than "North Country." It features one of those patented, highly committed performances from Charlize Theron, the lovely young South African who has somehow become the go-to gal for dubious American hairstyles and regional American accents. Whether or not she'll win another Academy Award I don't know, but she can start practicing those Oscar-night reaction-shot faces in the mirror right now.

"North Country" is also quite beautiful to look at: Director Niki Caro and cinematographer Chris Menges have captured the wintry remoteness of northern Minnesota's Iron Range -- which looks wintry even in seasons that aren't winter -- in glorious wide-screen images (even though much of the film was shot in the New Mexico mountains). This movie pines for authenticity with an almost palpable ache, and in its expensive fashion achieves a reasonable simulacrum of it, from Sissy Spacek with her glasses on a chain and a plate of strudel in her hand to the crumbling clapboard cottage with porch rails made from lengths of three-quarter-inch pipe.

All the other pillars of this particular genre -- let's call it high-end social realism -- are also in place. We've got working-class female bonding, exemplified by the on-screen friendship between Theron and the inimitable Frances McDormand. We've got a seductive trailer-park tramp (Michelle Monaghan) who does the right thing in the end. We've got someone dying of an incurable disease. We've got a silent dad and an enabler mom, a hard-boiled white knight riding in from New York City and the struggle to save a troubled teen. We've got drunken revelry on girls' night out, complete with a karaoke performance of "Hit Me With Your Best Shot" and a couple of guys who turn out not to be shit-heels. People in the film biz have been calling this one "Erin Brockovich Goes to Fargo" all along, but that isn't quite fair. It's "Norma Rae Goes to Fargo."

There's a sort of post-Pauline Kael truism in movie criticism that audiences never like to be lectured, that they enter the theater in search of pure pleasure. Along comes a large-scale moral melodrama like this one, rooted in a Frank Capra-style mythological view of the American heartland -- the kind of movie where characters lock their knees against the wide-open landscape and deliver homilies about the Right Thing to Do and the Way This Country Was Built -- and you realize that pleasure is a complicated business.

"North Country" is well acted and honestly made, as these things go, and I suspect large numbers of people will really like it. Are they just putting up with the speeches about gender equity in order to see Theron deliver another juicy troubled-woman role? I'm not sure about that. Yes, the medicine goes down better with sugar, but the reverse is also true.

We haven't discussed the fact that "North Country" is, as they say, based on a true story. In this case that's more of a mantra than anything else, a penumbra of reality thrown up around a handsomely mounted and utterly familiar work of fiction. It's true that a group of women who worked in the Minnesota iron mines, in and around towns like Virginia, Eveleth and Hibbing (hometown of Bob Dylan, whose music makes several appearances), filed a historic class-action suit that changed American caselaw and led to the sexual harassment policies in place at your workplace and mine. Dramatizing their painful struggle against a hostile company, a hostile union, and the rural, tradition-minded community that nurtured both, is a fine idea for a movie. It also catalyzes a linked set of Hollywood storytelling modes -- the David vs. Goliath courtroom drama on one hand, the heartland family weeper on the other -- that are virtually automatic.

I don't mind that Josey (Theron), Glory (McDormand), local hockey star turned big-city lawyer Bill (Woody Harrelson) and the rest of the major characters in Michael Seitzman's screenplay are entirely fictional. In some ways that's less confusing than a social-issue film like "Erin Brockovich" or "Silkwood," which can engender pointless discussions about how closely the filmmakers have stuck to the supposed facts. Rather, the problem with Seitzman's script is how predictable almost all of it feels; I felt my attention flagging throughout the final third of this two-hour-plus picture, mostly from the director and cast's immense effort to drag it bodily from its well-worn channel.

We first meet Josey in a pair of scenes, separated by some unspecified period of time: In one, she picks herself off the kitchen floor of a working-class home, where she's evidently been battered bloody by a husband or boyfriend. In the other, she's on the witness stand, being grilled by a hostile female attorney who seems to be Harriet Miers' Northland cousin. (As Harrelson's lawyer character explains to her later in the film, women who file sexual harassment complaints are attacked with the "nuts and sluts" defense: Either they imagined it or they invited it.) Clearly, the movie's task is to construct a chain linking one abused Josey to the other, and indeed to the one in between.

The conventional thing to say would be that Theron doesn't play Josey as a victim, but it also wouldn't be true. In fact, the strength of her performance lies in seeing that Josey has subtly conspired with the world around her to make herself a permanent victim. She has two kids: a teenage son whose parentage is shrouded in mystery and a little girl with the guy who beats her black and blue. She puts up with constant abuse from her taciturn mineworker dad, nicely played by Richard Jenkins (the dead father from "Six Feet Under"). When she tells him she's going to work in the same mine he does, he says: "You want to be a lesbian now?"

In that sense, Josey is perfectly prepared for the grim, Darwinian universe of the iron mine, which Caro captures as a filthy hellhole that reduces its men (and some of its women) to brutality. The work is well paying but dirty and dangerous, and in the precarious Midwestern economy of 1989, the federal mandate to hire women at all positions has threatened the mines' cloistered, macho universe. Caro is clearly a director who seeks to grasp complex social worlds; her previous film was the enjoyable, if overpraised, New Zealand sleeper hit "Whale Rider." In the meaty middle of "North Country," she places Josey in medium focus against the vicious hatred of the male miners, the cowed subjection of the women around her, and the open disdain of a frayed and isolated community that liked things better the way they used to be.

There's a degree of life in "North Country" that transcends everything the characters say and do, which is a good thing, since most of that is on the level of a made-for-Lifetime movie. A lot of this life comes from Theron; I find her acting so on the nose that it's not very interesting, but in addition to being beautiful she has an animal alertness that makes her highly sympathetic. At one point she has to deliver an awkward speech to her kids about "our first time in a nice restaurant" -- which is basically half a step up from Denny's and not quite as nice as Applebee's -- but something about her stumbling, shy enthusiasm makes the shtick irresistible. More than that, the moment expresses the story's central problem, which is that Josey has to find language to talk about the violence (both literal and otherwise) that's been inflicted on her.

Harrelson and Sean Bean are predictably enjoyable as the stand-up guys in Josey and Glory's world (even if Bean's Minnesota accent is more approximate than most). McDormand pretty much dusts off Marge Gunderson from "Fargo" and phones in her performance from there, but given the character's grisly situation, she should probably clear another place on her mantel for statuary, too. Caro speeds through the concluding courtroom scenes, which include the requisite conversion of several bad characters into good ones, but can't quite outrun the grinding wheel of formula. I came away awed by those helicopter shots of the vast, frozen wasteland, imagining the finger-numbing sensation of those porch rails in January, feeling that larger forces than lawsuits are at work in a place like that.