The GOP spin: Smear Wilson (again), belittle the charges. The Dems' spin: Bush and his enforcers lied us into war. 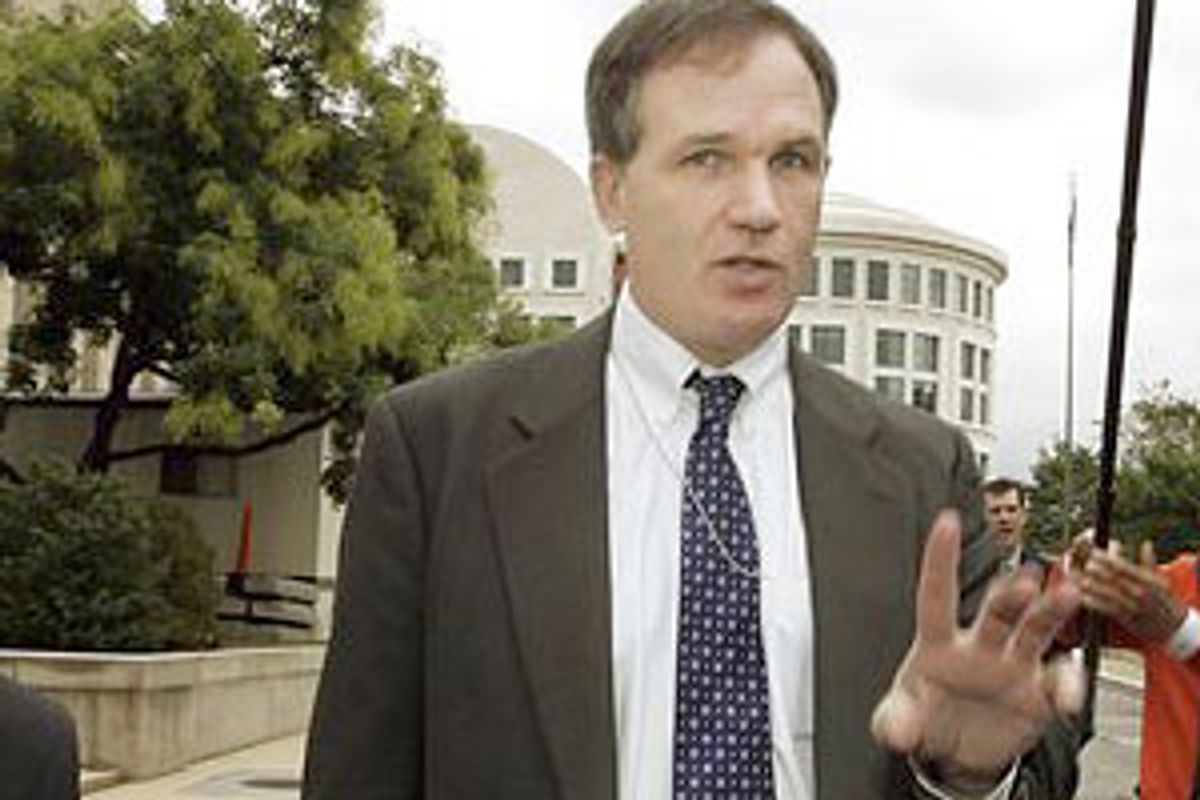 Long ago, Washington's political attack dogs resigned themselves to the fact that they have nothing on special prosecutor Patrick Fitzgerald. The man is so squeaky clean that just about the only dirt besmirching his public record concerns long work hours that made him ineligible to adopt a cat. Later this week, the most powerful men and women in the country will sit helplessly on the sidelines as Fitzgerald decides whether to indict White House officials in the case of Valerie Plame, a clandestine CIA agent whose identity was leaked to the press by the Bush administration.

But as soon as Fitzgerald announces his decision, in a press conference, a walk from the grand jury room to the magistrate's office in U.S. District Court, or a posting on his Web site, the political ditente will end. The knives will come out. It will be an all-out rhetorical war.

Though still unfinished, the two narratives of attack, one for Democrats and the other for Republicans, have been in the works for weeks. "We have prepared and are preparing for multiple scenarios," said Republican National Committee spokesman Brian Jones, who recently put out a press release calling former Vermont Gov. Howard Dean the leader of the "Merlot Democrats." On Friday, Jones began distributing updated fact sheets on Plame's husband, Ambassador Joseph C. Wilson, whose criticism of President Bush's rationale for war sparked the current investigation. "Wilson calls the United States an 'imperial power,'" reads one Republican talking point.

Wilson's character is still fair game for Republicans hoping to deflect attention from the possibility that senior White House advisors, like Karl Rove or I. Lewis "Scooter" Libby, may have broken the law. The RNC fact sheet claims, among other things, that Wilson admits to having used drugs in his youth, which is true. The fact sheet also claims that the CIA identity of Wilson's wife was not a secret when it was disclosed to the press, a falsehood belied by the fact that Plame's employer, the CIA, requested the current investigation. But these attacks also reveal a striking irony: Republicans plan to defend themselves by continuing the very same smear campaign that started the Fitzgerald investigation.

On Sunday, Sen. Kay Bailey Hutchison, R-Texas, debuted another spin designed to protect the White House. She downplayed the gravity of a perjury or obstruction of justice charge, two possible outcomes of the current investigation. "Look at Martha Stewart," Hutchison said on NBC's "Meet the Press," invoking the heavily derided perjury case against Stewart, who ended up serving a short stint in jail. "We are seeing grand juries and U.S. attorneys and district attorneys that go for technicalities, sort of a gotcha mentality in this country." A third approach under consideration is to attack Fitzgerald, whom even the president has praised for his "dignified" investigation, for being a detail-oriented stickler. Witness Monday's Wall Street Journal editorial: "The fact that the prosecutor has waited as long as he has -- until the last days of the grand jury -- suggests that he considers this a less than obvious case," the editorial board writes. "A close call deserves to be a no call."

On the Democratic side, the stakes are just as high and the rhetoric promises to be as fierce. Democrats see this as an opportunity to rub salt in the open wound of the war in Iraq, a point made succinctly Sunday by Howard Dean. "This is not so much about Scooter Libby and Karl Rove," Dean said on ABC's "This Week." "This is about the fact that the president didn't tell us the truth when we went to Iraq."

In this narrative, the leaking of Plame's covert identity and the possibility of resulting indictments are just the latest development in the misguided, if not dishonest, adventure that began in 2002 when White House officials decided they wanted to go to war against Iraq. New York Times columnist Frank Rich explained this story line over the weekend. "We don't yet know whether Lewis (Scooter) Libby or Karl Rove has committed a crime," he wrote, "but the more we learn about their desperate efforts to take down a bit player like Joseph Wilson, the more we learn about the real secret they wanted to protect: the 'why' of the war."

Last week, Rep. Dennis Kucinich, D-Ohio, who ran for president in 2004 on a "culture of peace" platform, introduced a resolution that would require the Bush administration to turn over all the documents produced by the White House Iraq Group, a collection of senior White House aides who developed the strategy to sell the war in Iraq.

But Kucinich's proposal, not to mention other legislative strategies being considered by Democrats in the House, has no real chance of moving forward under the Republican leadership. They privately hope that Fitzgerald uncovers what they cannot. "There are a number of folks on the Hill who would like to know more, frankly, about the history of Iraqi intelligence development," said one Democratic staffer who works with the House Armed Services Committee. "I think it's a relevant question to say, Is investigator Fitzgerald the person who has all the answers to this?"

Fitzgerald's questions for Judy Miller, the New York Time reporter who received leaks of Plame's identity, suggest that the prosecutor may, in fact, shed some light on this matter. According to Miller's account, Fitzgerald asked about Dick Cheney's involvement in the leaking of Plame's name, as well as Libby's traditional handling of classified information. Fitzgerald also showed Miller documents she thought she recognized as excerpts from the National Intelligence Estimate of Iraq's weapons capability, a document that may have been classified at the time.

And a report Monday from UPI suggests that Fitzgerald may have already looked into the discredited documents gathered by Italian intelligence that purported to show an Iraqi deal for obtaining uranium.

In some ways, the Fitzgerald investigation has already shed more light on the selling of the war. In one telling exchange from 2003, recounted by Miller, Libby told her that the classified NIE on Iraq "had firmly concluded that Iraq was seeking uranium." As Newsweek's Michael Isikoff pointed out, that was a fiction. "A declassified version of the NIE was publicly released just 10 days later, and it showed precisely the opposite," Isikoff writes, with Mark Hornsball in a Web-only report. "The NIE, it turned out, contained caveats and qualifiers that had never been publicly acknowledged by the administration prior to the invasion of Iraq."

Such disclosures play right into the Democratic spin on the Fitzgerald investigation. As Dean put it this weekend, "I fundamentally don't think these are honest people running the government."

In addition to the Fitzgerald investigation, there is another ongoing inquiry that could further confirm these accounts. For more than a year, the Senate Intelligence Committee has been working on a report to determine whether government officials, including many in the White House, misled Americans about Iraqi weapons intelligence in the run-up to war. The report has been delayed, however, by partisan bickering in a committee that has historically maintained a bipartisan front. Democrats on the committee have accused Republicans of "inexcusable" delays. "We see no sign that this is being brought to a close," said an aide to Sen. Jay Rockefeller, the committee's top Democrat.

At present, Democrats and Republicans are squabbling over who will be the final arbiter of exactly which specific administration statements, if any, were misleading, according to a committee staffer. Committee chairman Pat Roberts, R-Kan., wants the entire committee to vote on each of the more than 400 statements collected by staff, while Democrats would prefer that the committee staff make those determinations. "Our hope was to knock most of this out before we adjourned" for the winter recess, the staffer said.

The renewed focus on the actions of the White House in the marketing of the war is a narrative that many policy wonks and historians hope gains traction. For each fact known about the White House's work with intelligence -- such as the fact that Vice President Cheney made repeated visits to the CIA -- several unanswered questions remain. "If indictments are handed down it reopens that entire subject," says Joseph Cirincione, the director of nonproliferation at the Carnegie Endowment for International Peace. "Some books are hard to shut. And this one is about to pop back open."