Iraq war vet Paul Hackett is aiming for a Senate seat -- and a progressive revival of the Democratic Party. 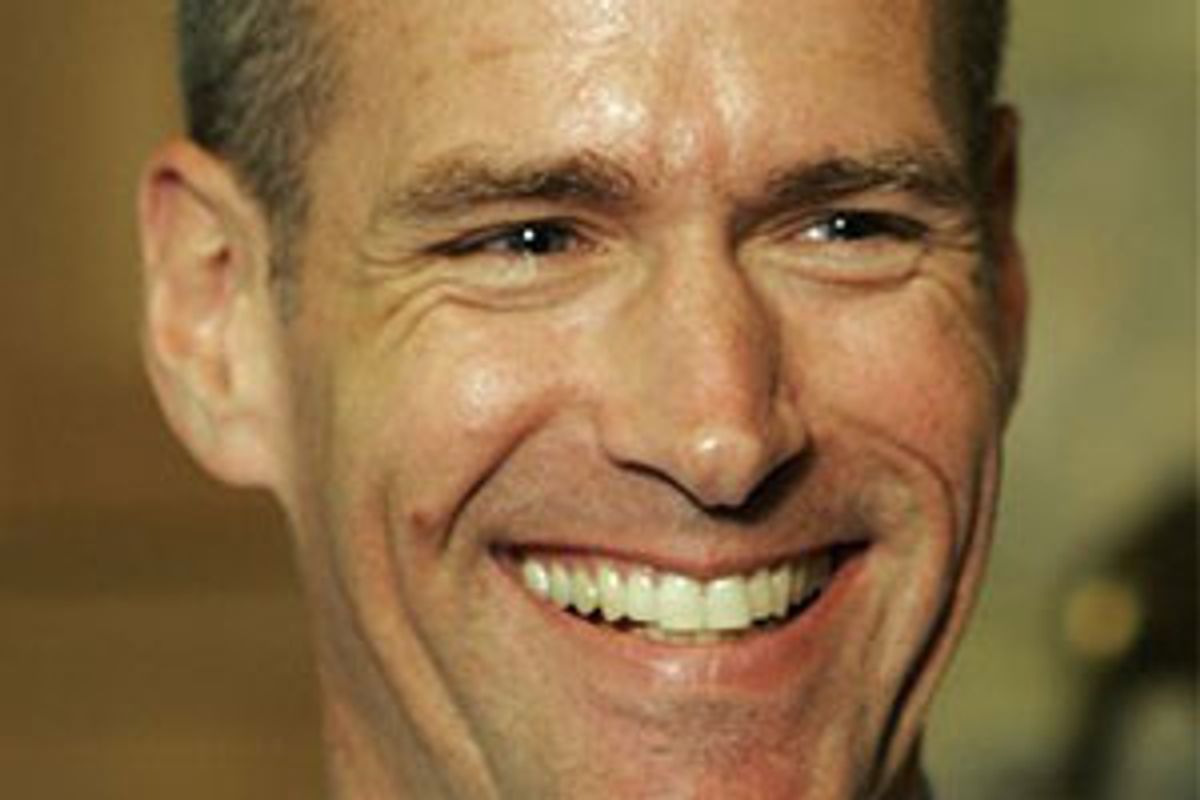 Marine Reservist Maj. Paul Hackett might be the one to put some real fight back into the Democratic Party. In a head-turning first run for office, Hackett, the first Iraq war veteran to enter the national political arena, narrowly lost a congressional bid against Republican Jean Schmidt in a special election held last summer in Ohio's most conservative district. Despite a serious financial handicap, little political experience and a blunt political demeanor -- he called George W. Bush "chicken hawk" and "son of a bitch" with regard to the war -- Hackett's strong showing fired up Democrats nationwide.

Now the 43-year-old personal injury lawyer and war vet is gunning for Capitol Hill again, channeling his bravado into a 2006 run, launched officially on Monday, against Ohio's two-term Republican Sen. Mike DeWine. Some of Hackett's political rise can be attributed to ongoing ethical scandals that have rocked the Ohio GOP -- including Gov. Bob Taft's recent guilty plea for accepting illegal gifts. Hackett's volunteering to fight in Iraq, landing him in perilous locations like Fallujah and Ramadi, no doubt also earned him respect -- as have his candid criticisms of a war increasingly unpopular with Americans.

But perhaps most important is how Hackett conveys the kind of straight-shooting image that Democrats have been struggling so mightily to regain. He doesn't hesitate to endorse same-sex marriage, decry right-wing religious zealotry or, as an NRA member, disagree with other liberals about gun control. In a wide-ranging interview, Hackett spoke with Salon about withdrawing U.S. troops from Iraq, rethinking the failed war on drugs, reviving the progressive side of the party, and more.

In your congressional race, your opponent praised your service but said she thought you should "support our president" with regard to the war. What do you say to people who fault you for criticizing a war you volunteered to fight?

This is the United States and freedom of speech and freedom of political dissent are what make this country great. I served and I'm entitled to speak my mind. I back the president to the extent that I was willing to fight in his war -- and I did it voluntarily and happily, and I'd do it again.

You supported invading Afghanistan, but you've said you think we went to Iraq based on lies. You do agree with the president, however, in that you don't think we can "cut and run." What would you do differently in Iraq?

First of all, if this president wanted to succeed in Iraq, the first thing he would have done is listen to the generals in the very beginning when they said it would take more than 150,000 troops. General Shinseki said that and was summarily fired. That was before the invasion of Iraq.

But what would you do now?

If I were the president, I'd tell the military to figure out how we systematically and in organized fashion get our troops out of there, because the war's over. It's not going to get any better.

When you ran for Congress, you favored better training for Iraqi forces. Now you're saying we should get out?

Bullshit. I've been there. There's no success unless you call painting schools success. We've painted a lot of schools.

Let's talk about the so-called moral values issues that you say spurred you to run for Congress last summer. You were upset about what you called Republican grandstanding on Terri Schiavo, abortion and gay marriage.

Why are these the No. 1 issues in the United States when we've got an economy which is in even more dire danger of reaching rock bottom than it was when I embarked on the congressional race? Frankly, these social issues are simple and straightforward. I'll be happy to take each one individually. Gay marriage and gay rights: I'm fond of saying, "Who cares?" The debate is about whether or not American men and women can walk into a courthouse and get equal treatment under the law regardless of their sexual preference. Anything less than that is un-American.

It's bad -- nobody thinks it's good. The question is: "What do we do to eliminate it?" Period. The only thing that's going to eliminate it is education, not religious fanaticism. Until education eliminates it, it must remain safe, legal and rare [as possible].

And the right-wing uproar over Terri Schiavo?

Outrageous. Absolutely outrageous. And most Americans agree with that. The only Americans that don't are religious fanatics. They've got more in common with Osama bin Laden than I've got with them.

You sound like someone who could be held up as a liberal champion. Still, your position on guns is probably upsetting to doctrinaire liberals. How do you reconcile your position on gay marriage and gun control?

John Edwards' "two Americas" theory was central to the Kerry-Edwards campaign last year. After the disastrous response to Hurricane Katrina, do you subscribe to this theory?

I look at it like there's one America. We're all in the same boat. We all have responsibilities. Those of us who've enjoyed success in life have a responsibility to give back to this country. And we have a responsibility, frankly, in a Christian sense -- or, for that matter, in a Muslim sense or a Jewish sense -- to take care of those who are less fortunate and make sure they get by. If that's what Edwards means by "two Americas," yeah, I subscribe to that. I perceive the religious fanatics in the Republican Party as socially irresponsible in many ways and that's one of the ways they're socially irresponsible -- that they are unwilling to help those who are less fortunate.

What do you propose to help solve our looming energy crisis?

First of all, leadership starts at the top. I couldn't help but smile when I saw President Bush, with this great anguish and difficulty, asking Americans [in the wake of Katrina] to consider conserving their energy consumption. Conservation is a part of the solution. Also, we need to spend the money to fund the research to come up with an alternative source of energy to fuel our cars and electrify our houses, and our industry. That can be done. I'm not a scientist, but I have confidence in the United States. We had the Manhattan Project and we put a man on the moon; I'm absolutely confident we can come up with a way to reduce and eventually eliminate our dependency on petrochemicals. But until that happens, we should be asking Americans to buy fuel-efficient vehicles. And we should be asking the American automobile industry to produce fuel-efficient vehicles.

What about the environment?

First of all, I wouldn't drill in the Artic National Wildlife Refuge. That oil isn't even going to be online for another 10 or 11 years. And I would enforce all of the EPA laws this administration is working overtime to dismantle. There's a lot of money to be made in setting [good environmental] standards, in developing fuel-efficient vehicles and vehicles powered by alternative fuel.

What do you think of the drug war as it's been "fought" for the last 30 years? What would you do differently to deal with the drug problem?

Obviously the drug war is not working. With many Republican and Democratic administrations their solution is to build more prisons and put more people in jail. I'm not comfortable saying legalize it, but I think there needs to be an honest discussion about providing money to educate people and to treat people who have an addiction. Many Americans ask why we have to get touchy-feely about this. Well, I'll tell you why: because we're spending billions and billions of dollars to warehouse people in jail, and that ain't workin'.

You've described yourself as a fiscal conservative. How would you bring that to today's Washington?

We've got to cut the pork. There's some congressman up in Alaska who wants to build a $50 million bridge to nowhere. That's just one example of thousands. We subsidize large corporations, give them tax breaks, and they ship our jobs overseas.

Decrying bad spending is a favorite pastime in politics. Can you elaborate about what else you consider to be misspent funds?

Well, let's look at all the countries we spend billions to support who don't deserve our support. They don't deserve it because they're a threat to the United States -- their governments are dictatorships and they're not productive members of the world community. Take a look at Pakistan, Saudi Arabia and lots of others.

What do Democrats need to do to win and get the country back on track?

Stand up and fight for what they believe in and not be afraid of it. I think [there's been] a failure of ideas, a failure of leadership and a failure of having a message to convey. I'm harshly critical of the Democratic leadership to the extent that they stood by and had no critical comment or discussion leading up to their OK'ing the war in Iraq.

Does the Democratic Party stand for progressivism anymore?

There are pockets within the party that do. The constituents and the grass roots and the people out here in Ohio stand for that. I think they've been let down by their leadership.

Do you count yourself among the party's progressives?

Sure, if "progressive" means standing up for the things that made this country great. If it means fighting for working Americans, fighting for an economy that allows working Americans to survive and provide for their families, and if it means demanding a rational discussion about how our military is used or misused ... If that's what progressive stands for, yeah, you bet I'm progressive.