Can the GOP make lemonade out of Miers?

The radical right's veto of Bush's lawyer has left the GOP scarred. But if the president pushes through a reactionary, the real losers may be the Democrats. 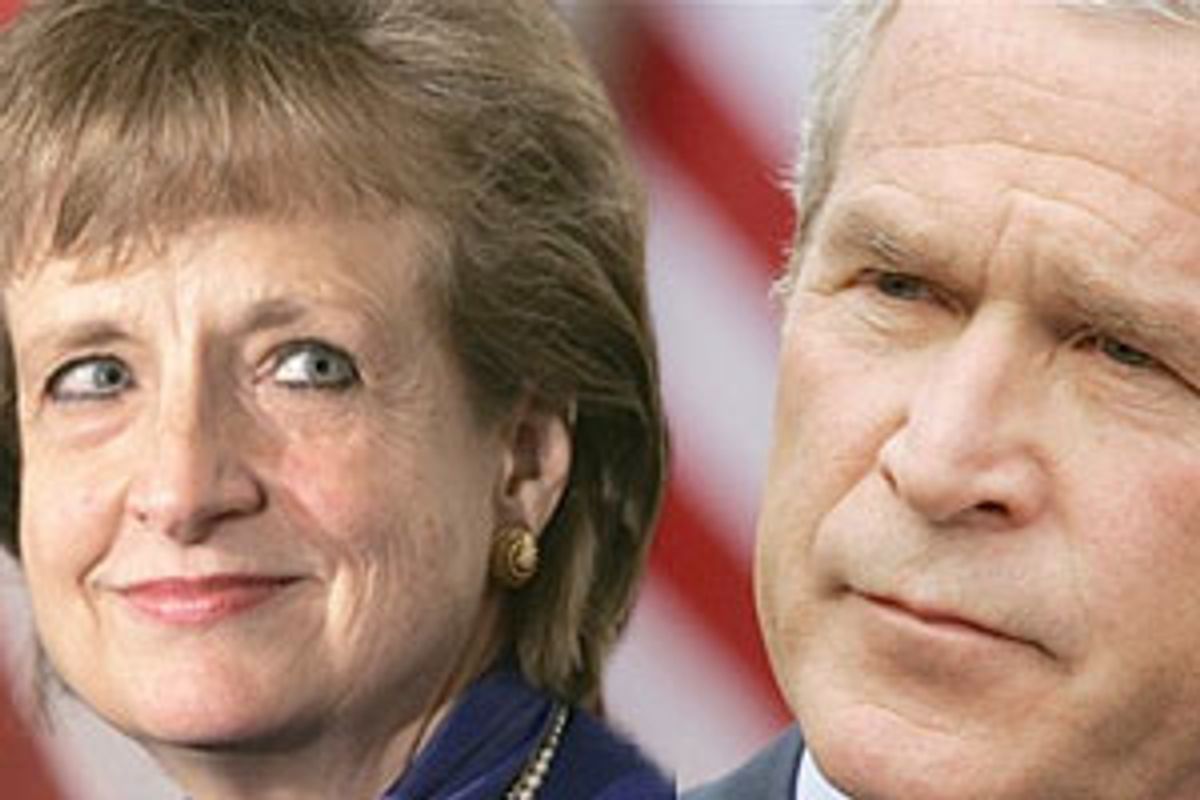 White House counsel Harriet Miers will now fade into history as an also-ran, a presidential acolyte who was set up to fail. But that is not all that will be said of the president's loyal Texas attorney. In the wake of her withdrawn nomination, Miers has left a legacy of tumult that will help shape Washington politics over the next year and beyond.

In just a few weeks as a Supreme Court nominee, Miers unwittingly accomplished what Democrats have still failed to do: She single-handedly called into question President Bush's electoral mandate and helped redraw the political landscape. She fractured the Republican Party's impenetrable front. She rewrote rules of judicial confirmation battles. And she exposed both the legal agenda and the power of the modern-day conservative movement. The lawyer who devoted her life to defending George W. Bush proved to be a political wrecking ball.

The scope of the damage will depend largely on President Bush's next appointment to the high court. Conservatives, still enraged by the Miers pick, have promised to cut the president little slack, despite a perfect storm of crisis draining Bush's political capital: the crescendoing CIA-leak scandal, high gas prices and deepening disapproval of the Iraq war. Simply put, conservatives will not forgive, or forget, what they see as the betrayal of the Miers nomination. "Conservatives going forward will never again have the same relationship with President Bush," says Richard Viguerie, a conservative activist who helped lead the opposition to Miers.

Those threats from an emboldened right wing have renewed fears among Democrats that Bush will appoint a more radical nominee, which could prompt a fierce fight in the Senate with lasting effects for the 2006 elections. "If President Bush does send up a radical right nominee, after the Miers debacle, the Democrats will rise to the occasion," said Nan Aron, the leader of the liberal Alliance for Justice, an umbrella organization for civil rights, consumer and women's groups. "I'd say this is a very grim and dangerous moment for the courts and this country."

One thing is clear: Whomever the president chooses, it will be seen as a reaction to his failed nomination of Miers. One need only look back to last month's confirmation hearings of Chief Justice John Roberts to see how dramatically Miers has already shifted the political debate. Roberts was introduced to the nation as a public sphinx. He had a sterling résumé and a gleaming smile, but came to the Senate with no substantive record of his personal legal views.

Still, leaders on the right rallied to his defense, quietly squelching dissent within their own ranks. They dispatched a platoon of talking heads to deliver meaningless platitudes, saying Roberts would use "judicial restraint" and "not make law from the bench." They told the American people, again and again, that it was not proper for the Senate to know what Roberts really thought about anything specific. "The Senate traditionally has respected the nominee's judgment about where to draw the line," said Sen. Orrin Hatch, R-Utah, on the first day of Roberts' confirmation hearing.

But with Miers' nomination, a radical transformation occurred. Conservatives initially distanced themselves from the president. A week later, after dozens of conference calls, they decided to declare total war on their own political leader. Even more remarkably, the Republican insurgents were victorious.

"It's not often that you go toe to toe with the president of the United States of your own party and beat him," says Viguerie. "It is very satisfying." The truce that has long held the Republican Party together -- uniting ideological conservatives, corporate interests and the religious right -- fractured completely under the weight of the Miers nomination.

At the same time, Miers inadvertently changed the rules of debate over judicial nominees. A coterie of conservative Republicans, including Sen. Sam Brownback, R-Kan., and Sen. Lindsey Graham, R-S.C., began demanding answers to fundamental questions about her personal views. Republicans who once resisted attempts to get White House documents authored by Roberts now demanded the White House documents authored by Miers. Conservatives began to criticize the entire premise of nominees without clear judicial records. In a statement released Thursday, Manuel Miranda, a conservative legal activist, sounded like a Democrat, calling for an end to the "corrupting practice of stealth nominees." The president's next nominee to the Supreme Court will have a far more difficult time hiding his or her views.

Miers also exposed in plain terms the political goal of the conservative movement. It goes far beyond "judicial restraint" or even the willingness to overturn Roe v. Wade. The conservative movement wants to transform legal thought in America. It seeks to accomplish what it has failed to do ever since Ronald Reagan's Supreme Court nominee, Robert Bork, was rejected in 1987. This is now explicit: "The President should now make a qualified nomination that overcomes the stigma created by Bork," Miranda announced in Thursday's press release.

"This event really cracked the code, unmasking the true intentions of the radical right," says Aron. "This is a president who has been denying for five years that he has a litmus test. It's now clear that his base has one, and his base is not willing to settle. The fight is now out in the open."

Yet there is an irony in the Miers fiasco. Despite the trouble Miers has created for President Bush, there is little reason for liberals to cheer unless Bush's next nominee proves to be a mainstream conservative. But activists like Aron are worried that the next pick, expected within days, may be the sort of radical legal revolutionary they have long feared. The current political atmosphere echoes 1990, a disastrous time for those who oppose a conservative takeover of the Supreme Court. "After a few years of George Bush Sr. being called a moderate on a number of social issues, he finally needed a way to shore up his base before an election," says Aron. "He sent up Clarence Thomas."

Senate Democrats have also expressed concern. On the Senate floor Thursday morning, Minority Leader Harry Reid, D-Nev., came to the defense of Miers, calling her a "gentle and kind" woman. "The only voices heard in this process were the far right," he said. "President Bush should reject views of these extremists."

But Miers' political legacy may be too powerful to give Bush a choice. As Viguerie put it Thursday, the president's selection of another mainstream conservative like Attorney General Alberto Gonzalez would be a "political suicide." With three years left in his second term, the president has been forced into a corner by his own base. He may have no choice but to do what he is told.