But Bush still needs to come clean on the White House's role in abusing classified information for partisan purposes. 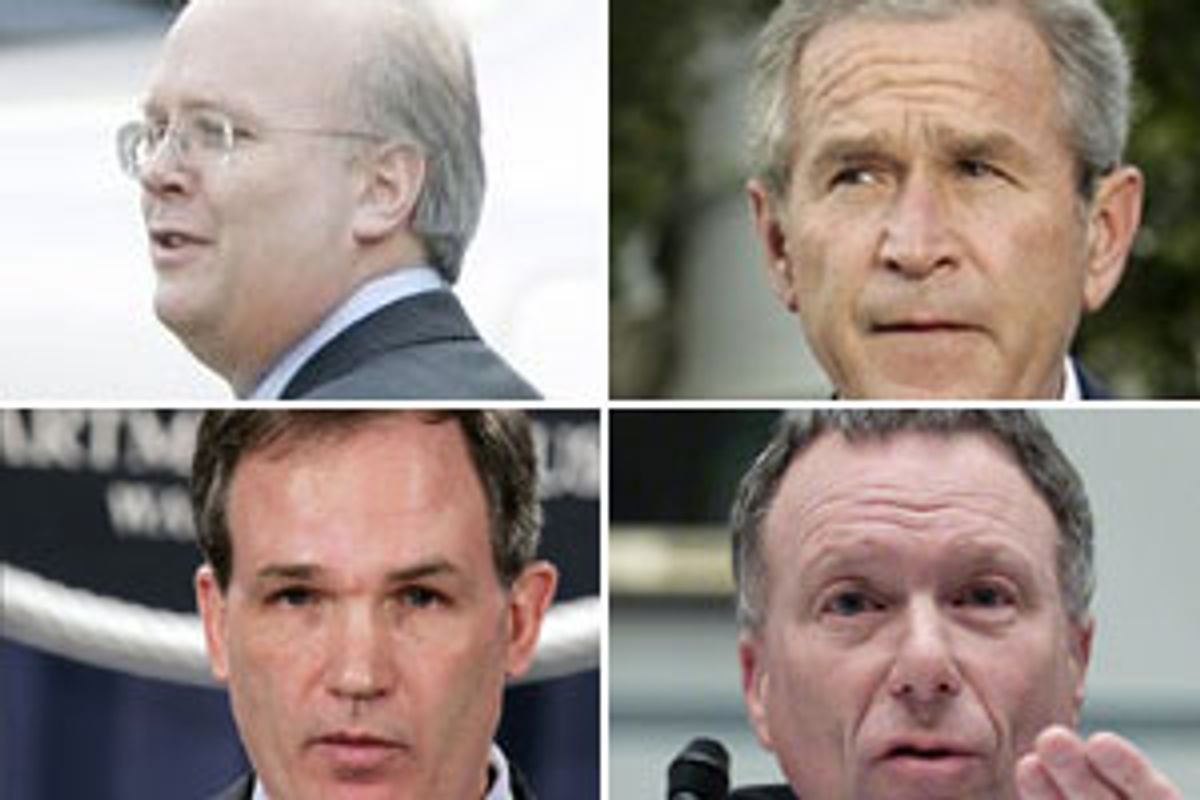 While the full implications of the Scooter Libby indictment have yet to emerge -- including the question of whether Karl Rove, aka "Official A," ultimately escapes prosecution -- special counsel Patrick Fitzgerald has convincingly exploded right-wing disinformation about the CIA leak affair.

For many months now, Republican politicians and pundits have floated misleading spin to deflect attention from the fundamental truth: For partisan political reasons, leading figures in the White House and the Bush administration leaked an important national security secret.

The purveyors of GOP spin have proclaimed that Valerie Plame Wilson's CIA identity was no secret at all; that the exposure of her identity merited no investigation whatsoever; that she was responsible for sending her husband Ambassador Joseph C. Wilson IV to Niger to investigate alleged uranium trading with Iraq; that the special counsel investigation somehow represented the "criminalization of politics"; and that the special counsel himself is overzealous and unprofessional.

Within the first few pages of his indictment, Fitzgerald swiftly dismisses the false notions about Wilson's mission to Niger, his wife's role in that mission and the nature of her work at the CIA. Paragraph 1e notes that the CIA "decided on its own initiative to send Wilson to the country of Niger to investigate allegations regarding Iraqi attempts to acquire uranium yellowcake, a processed form of uranium ore." That statement in the painstakingly worded document clearly attributes responsibility to the agency and not to her. (And as he noted at his press conference, the notion that she played a role in dispatching her husband to Niger -- which he pointedly did not endorse -- was of no relevance to the charges against Libby.)

Whether Valerie Wilson endorsed or even suggested that her husband could assist in that endeavor mattered not at all to Fitzgerald, who plainly assigns the responsibility for her husband's mission to the agency -- and not to her.

The indictment's ensuing paragraphs debunk the lie echoed incessantly by nearly every right-wing megaphone, from Rush Limbaugh down, concerning the secrecy of Valerie Wilson's CIA position. Contrary to claims that "everyone in Washington knew" she worked for the agency, including her friends and neighbors, Fitzgerald declares: "At all relevant times from January 1, 2002, through July 2003, Valerie Wilson was employed by the CIA and her employment status was classified. Prior to July 14, 2003, Valerie Wilson's affiliation with the CIA was not common knowledge outside the intelligence community."

Dispassionate as those facts appear on the printed page, the prosecutor sounded grim as he went on to explain their deeper meaning: "The fact that she was a CIA officer was not well known, for her protection [and] for the benefit of all us. It's important that a CIA officer's identity be protected, that it be protected not just for the officer, but for the nation's security ... This is a very serious matter and compromising national security information is a very serious matter. But the need to get to the bottom of what happened and whether national security was compromised by inadvertence, by recklessness, by maliciousness is extremely important."

And as for the "criminalization of politics," he noted that from his perspective, the charges brought against Libby have nothing to do with partisan interests. He laughed off such accusations by noting that despite accusations that he is a "Republican hack" or a "Democratic hack," he is registered in neither party and serves no interest except the law.

Yet within the limits of the law and without rhetorical flourish, Fitzgerald's investigation has exposed elements of a White House conspiracy to abuse classified information for partisan purposes.

The complete story is yet to unfold, even as Libby takes the fall, but the Bush White House clearly bears responsibility for the original offense and the subsequent coverup. Neither the vice president nor the president has claimed that Libby misled them about his involvement in the exposure of Valerie Wilson -- which suggests that Cheney and Bush have known about Libby's complicity for many months, and did nothing to discipline him.

The same can be said of Rove, to whom the indictment alludes under the rubric of "Official A," the unnamed "senior official in the White House" who spoke with columnist Robert Novak about Valerie Wilson's work for the CIA. The special counsel may not believe that Rove could be found guilty beyond a reasonable doubt of a federal offense, but he clearly believes that Rove participated in this nefarious scheme.

As Fitzgerald explained more than once Friday, the law bars no witness before the grand jury from discussing his or her testimony. So despite all the blather from the press podium and the president himself about the restrictions imposed by an "ongoing investigation," Bush has long been able to determine precisely what part Rove played. He could now fulfill his promise to dismiss any official who exposed a CIA officer, an act that supposedly fills him with revulsion. He need not wait for an indictment that may never come.

In the grim light cast by the indictment of Libby, the president himself should now be required to answer an updated version of the classic Watergate question: What did he know about the national security offense and the apparent coverup perpetrated by his vice president and his chief political advisor? When did he know it? And why, with the facts laid before him, has he still done nothing about this outrage?