Fitzgerald nailed the vice president's chief of staff for perjury. But with the just-the-facts prosecutor saying the case isn't closed, the White House can hardly be relieved. 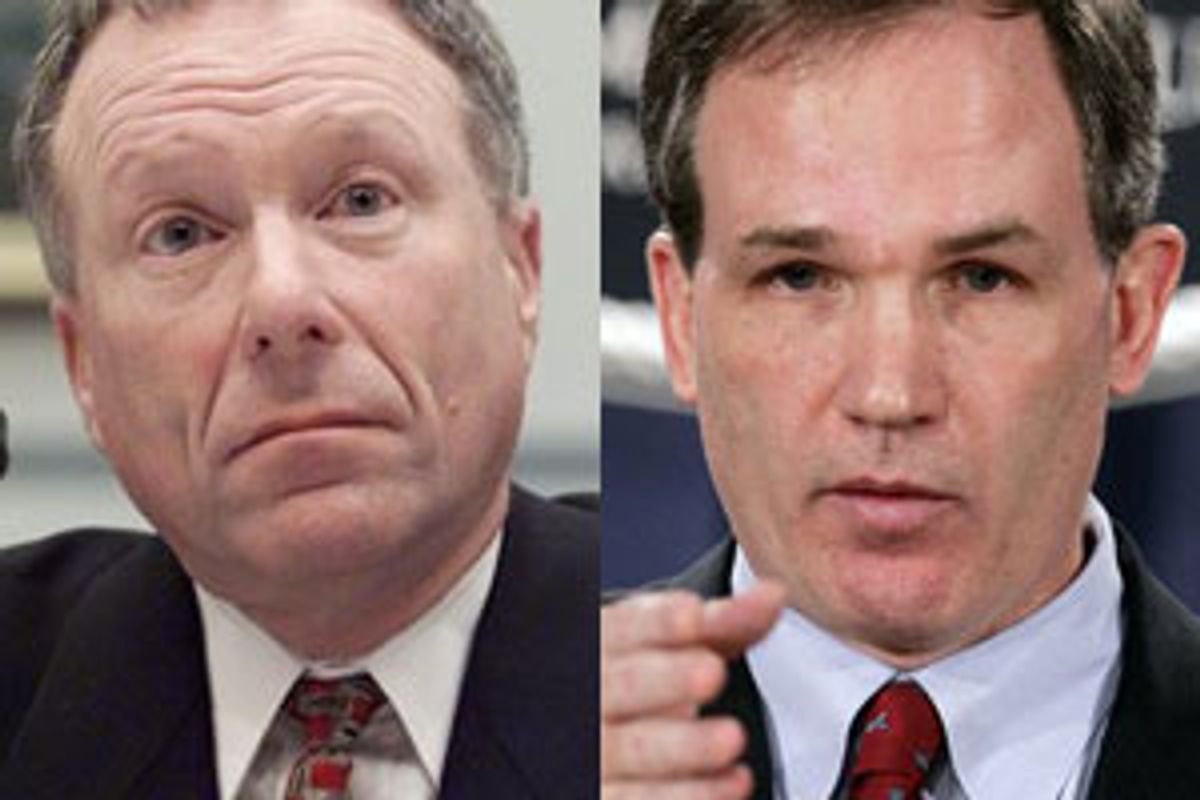 Special counsel Patrick Fitzgerald is no Kenneth Starr. At his press conference Friday, he did not hold up a stained blue dress. He gave no indication that he intended to haunt the Bush administration to the end of its days. He issued only one indictment, and that only on charges of lying, not conspiracy or illegally revealing a covert agent. But the White House can hardly be relieved. His investigation is not over yet. The fate of Karl Rove is still unknown. And although the indictment Fitzgerald brought is narrow, it appears to be very strong.

Many expected Fitzgerald to crack the White House wide open. After two years of investigation, he had delved deeper into the inner workings of the Bush administration than any other outsider. He had sifted through the internal e-mails, examined the phone records and interviewed the closed council of men who led the nation to war in Iraq on false claims.

For President Bush's critics, Fitzgerald's absolute silence, coupled with his reputation for leaving no stone unturned, seemed to herald sweeping indictments. Official Washington speculated for weeks about the charges being considered by the mysterious lawman from Chicago. The talking heads spoke of vast conspiracies, White House officials who had flipped, and succession plans for Vice President Cheney if he was charged. Bush's foes fantasized about frog-marching Karl Rove, the most powerful political advisor in a generation, from the West Wing. Prosecutor Fitzgerald, they dreamed, would finally put the Iraq war on trial.

The Patrick Fitzgerald who broke his silence in a 7th floor conference room at the Department of Justice Friday afternoon had a different agenda altogether. First of all, he wanted everyone to calm down. "I just hope people will take a deep breath," Fitzgerald told the hundred or so reporters and cameramen who crowded in to hear him speak. "Nobody wants this over as much as I do."

Fitzgerald announced that he had uncovered a grave set of crimes by a top aide to the vice president of the United States, I. Lewis "Scooter" Libby. Libby had testified, to the FBI and a grand jury, that he had not known the identity of Valerie Plame Wilson, a classified CIA agent, before her name was leaked to the press. Libby claimed that he only heard her name from reporters. "It would be a compelling story that will lead the FBI to go away, if only it were true," Fitzgerald said. "It is not true." In fact, Fitzgerald said Libby had discussed Wilson with the top officials from the CIA, the State Department, and the vice president, on numerous occasions, and then brought her name up himself with several reporters. The prosecutor charged Libby with five counts, including obstruction of justice, perjury and giving false statements. Altogether, the charges carried a possible 30-year jail term and fines of as much as $1.25 million. "That is a very, very serious matter," Fitzgerald said.

Having finished his introduction, Fitzgerald began to speak in a sort of code. Prosecutorial guidelines, he said, did not allow him to discuss any other part of the investigation, which he said would continue for a while. He said nothing about a broader conspiracy charge, or any charges that would call into question the integrity of the entire White House. He spoke of the two main laws that might be used to criminalize the act of leaking a CIA agent's classified identity in narrow terms, as if they did not apply. "I don't want to add to a feverish pitch," he said. The Intelligence Identities Protection Act of 1982, he said, required the ability to prove that the classified information had been intentionally and knowingly disclosed, a crime he had not applied to Libby. A separate Espionage Law was also difficult to use. "You should be careful in applying that law," he said. Fitzgerald had opted for a strong but narrowly defined case rather than gamble on a broader but legally riskier one.

When a reporter told Fitzgerald he had been labeled a political partisan, the prosecutor laughed. "For which party?" he asked. He is not registered as a Democrat or a Republican, and judging by his public presentation, he could not care less about politics. He would issue no report. He had no desire to testify before Congress. He would not disclose all he had found. "Charge someone, or keep quiet," he said.

For those who have studied the art of prosecution, Fitzgerald's restrained, just-the-facts presentation was a model to be emulated. Katy Harriger, a political scientist at Wake Forest University in Winston-Salem, N.C., who has written about special counsel investigations, was watching the press conference from home. "I think it is good he did not take the bait. He did not want to get drawn into that," she said. "I think it will be the pundits that will draw those conclusions."

The pundits, and politicians, didn't wait to draw conclusions. House Democratic leader Nancy Pelosi, D-Calif., called Friday a "sad day" for the American people. "At the heart of these indictments was the effort by the Bush administration to discredit critics of its Iraq policy with reckless disregard for national security and the public trust," she added.

President Bush issued a bland statement that avoided taking any position on Libby's guilt or innocence beyond the nostrum that he was innocent until proven guilty. "Scooter has worked tirelessly on behalf of the American people and sacrificed much in the service to this country," Bush said, before departing for the weekend at Camp David. "He served the vice president and me through extraordinary times in our nation's history."

Others turned their focus on the future. "It is a huge problem for this administration and a huge embarrassment," Norman J. Ornstein, a politics expert at the conservative American Enterprise Institute, said of the indictment. He pointed to the fact that the day's events had not ended the legal scrutiny of the president's political advisor. "It can't be good news that they are continuing on talks and investigations on Karl Rove. If this goes on for any length of time it just paralyzes the White House."

There were some juicy new details in Fitzgerald's indictment that suggest more revelations will be forthcoming. Fitzgerald mentioned a mysterious "Official A," who worked high up in the White House, who had tipped columnist Robert Novak. In the coming days and weeks, there is little doubt that many more details will be revealed about the CIA leak. Journalists like Novak and NBC News' Tim Russert will come forward to disclose what they know.

As for Fitzgerald, he hinted that his investigation might be winding down, saying, "We're not quite done," and that the "substantial bulk" of work was complete. "I've got plenty of other cases," he said. "I've got a full-time job." But he also refused to comment on whether he might empanel a new grand jury. For the White House, the longest week was not over yet, and it might not be for a long time.