A Scalia by any other name

Conservatives have their man in Samuel Alito. Liberals have their worst fears realized. The battle over the Supreme Court nominee is about to get ugly. 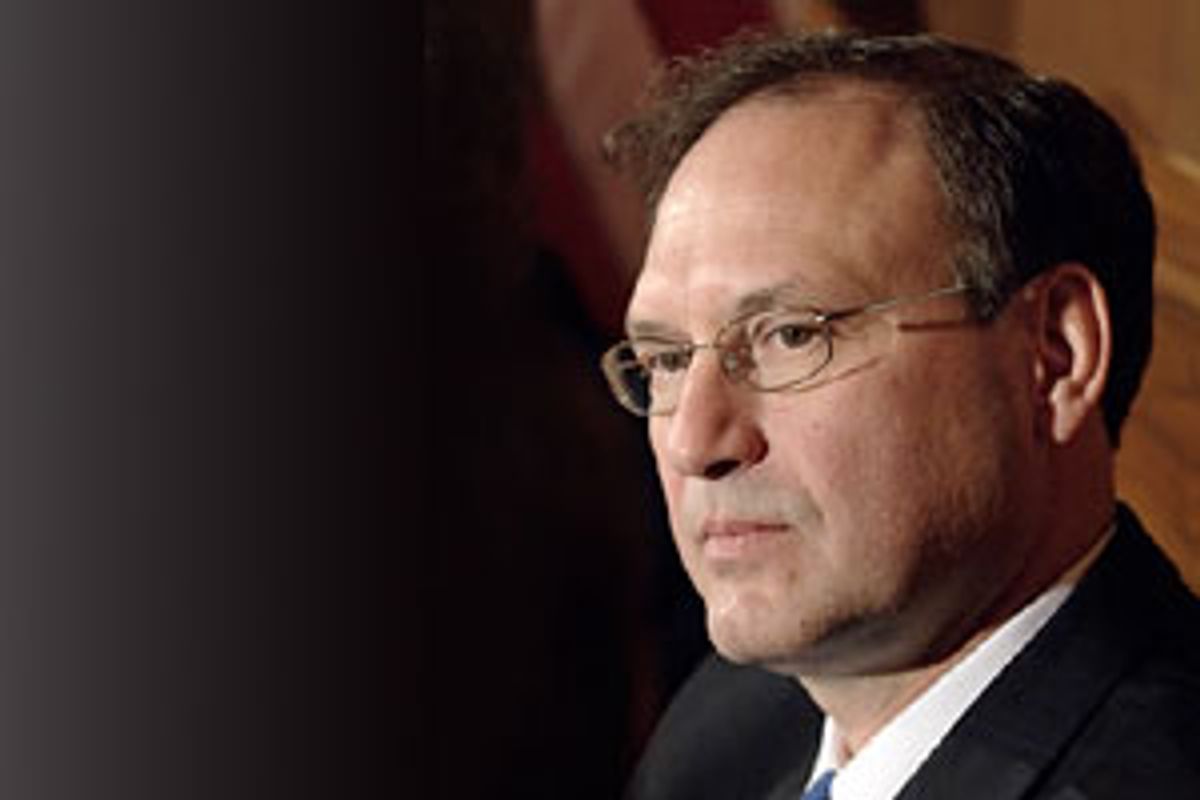 As Freudian slips go, it was pretty major. Shortly before noon on Monday, Sen. Chuck Schumer, D-N.Y., appeared before cameras in the Senate Radio and TV Gallery to voice his concerns over the latest Supreme Court nominee. "The initial reaction of myself and most Democrats is the president missed a real opportunity," Schumer said, as he dodged and weaved through reporters' questions about how Democrats would respond. "Nothing is on the table and nothing is off the table. Let's learn more about Judge Scalia."

He meant to say "Judge Alito," as in Samuel A. Alito Jr., the jurist from the 3rd Circuit Court of Appeals, whom President Bush picked to replace retiring Justice Sandra Day O'Connor. But the mistake was telling. In Alito, Democratic leaders and their liberal allies see their worst fears realized -- another conservative ideologue in the mold of Justice Antonin Scalia who can definitively reshape America's legal landscape. "This is a different prospect than Roberts or Miers," said one Democratic Senate aide Monday afternoon, referring to the president's last two nominees, John Roberts and Harriet Miers, who withdrew her nomination in a hailstorm of criticism from conservatives last week. "There is going to be significant opposition."

The Alito nomination has all the makings of one of the most contentious Supreme Court battles in American history, with both liberals and conservatives raring for a knock-down, drag-out fight. After the Miers debacle, conservatives finally have their man in the hot seat, a native son of the movement who spread his wings in the Reagan administration and then staked out a reputation as a conservative's conservative on a relatively liberal appellate court.

Liberals, for their part, have a nominee with a documented record opposing some of the country's most popular legal principles. In his 15-year career as a judge, Alito has argued unsuccessfully for a law that required women to notify their spouses before they had an abortion. He ruled that the federal government does not have the right to regulate the sale of machine guns. He tried to limit the application of a federal law requiring employers to offer maternity, paternity and sick leave for their workers. He showed little sympathy for death row inmates who are denied effective lawyers. "Liberals are quietly delighted by a nominee who has the ability to unite all of the groups in opposition," said Jonathan Turley, a law professor at George Washington University. "Not since Bob Bork have you had a nominee who has the ability to coalesce all these groups."

In a matter of hours after the nomination, a bevy of liberal interest groups announced their campaigns to defeat Alito's nomination. This included organizations such as Planned Parenthood, the Alliance for Justice, and People for the American Way, all of which had waited more than a month before deciding to oppose Justice John Roberts. At the same time, conservative groups, like Concerned Women for America, which recently clashed with the president over the Miers nomination, signaled their delight in a flurry of press releases.

"Both sides are jumping in with both feet immediately," said Bert Brandenburg, the executive director of Justice at Stake, a nonpartisan group that tracks judicial selection. He predicted that interest-group spending on the Alito nomination would dwarf the $2.4 million spent to support and oppose Judge Roberts' nomination. "Both sides have been collecting millions of dollars for years, and we are going to see it spent soon," said Brandenburg.

Senators from both sides of the aisle restricted themselves from explicitly endorsing or opposing the nomination, saying they would wait until the Judiciary Committee completed its review. But Democrats were not subtle about their intentions. Sen. Ted Kennedy, D-Mass., claimed Alito was a sop to the president's right-wing supporters, a decision "based on weakness, not on strength." Vermont Sen. Patrick Leahy, the ranking Democrat on the Judiciary Committee, called Alito a "needlessly provocative nomination." The Senate's top Democrat, Harry Reid of Nevada, had announced on Sunday that an Alito nomination would "create a lot of problems."

The shape of the Democratic strategy, however, is still a work in progress. With only 44 members in the Senate, the Democrats are unlikely to muster enough votes to defeat the Alito nomination. But they could mount a filibuster, a procedural maneuver that could subvert a majority vote and prevent Alito from joining the Supreme Court. "Alito does have the characteristics of a nominee that can sustain a filibuster fight," said Turley, the law professor. "The only question is whether the Democrats can overcome chronic disorganization in their ranks."

Several outlying Democratic senators, including Robert Byrd of West Virginia, Kent Conrad of North Dakota, Bill Nelson of Florida and Ben Nelson of Nebraska, are seen as potential defectors to the Alito camp. Of particular concern to Democrats is Sen. Ben Nelson, leader of the so-called Gang of 14, a bipartisan group of senators who agreed this summer to prevent filibusters of judicial nominees, except in extraordinary circumstances. David DiMartino, a spokesman for Nelson, said Monday there was nothing about Alito that would lead the senator to change his mind and support a filibuster of Alito's nomination. "I don't think the 'gang' agreement is applicable," DiMartino said. On Tuesday, he clarified those comments, saying that he did not mean to imply that Sen. Nelson had ruled out a filibuster. The gang agreement was "only not applicable because nobody is filibustering yet," he said.

To compensate for their defections, Democrats may be able to peel off a few moderate Republican senators who will be under intense pressure to oppose Alito, if only for his clear support for legal limits to abortion access. "It complicates efforts for people like Lincoln Chaffee [R-R.I.] or even Rick Santorum [R-Pa.]," said one Democratic leadership aide, noting that both senators are involved in tight reelection campaigns. "These guys are all trying to appeal to exurban women."

Tom Goldstein, a constitutional lawyer and the author of SCOTUSblog, doubted that any of these concerns would be enough to overcome the Republican majority in the Senate. Senators from both parties, he said, will likely conclude that Alito has less in common with Scalia than with another well-respected judge who recently won the support of 78 senators. "Sam Alito is a lot more like John Roberts," said Goldstein, who correctly predicted Miers' downfall 42 minutes after the president announced her nomination. "It's not going to be a coronation, but at the same time, it would be very surprising for him to not get approved."

Like previous nomination battles, no issue will feature more prominently in the coming debate than abortion. Unlike previous fights, however, the impact of Alito's appointment on abortion is far from abstract. The current court calender provides Alito, if he is confirmed, two opportunities to reshape abortion law by next summer. The first case, Ayott v. Planned Parenthood, asks whether teenage girls whose pregnancy threatens their health can get an abortion without waiting 48 hours after notifying her parents, as required by state law in New Hampshire. The second case, Gonzales v. Carhart, asks a similar question: Does a federal law banning late-term abortion need to have an exemption if the health of the mother is at stake?

In both cases, court observers say that Justice O'Connor would likely have been a swing vote, siding with a woman's right to a prompt abortion whenever her health was an issue. But Alito's record suggests he has little sympathy for that position. In a 1992 dissent, Alito defended the constitutionality of a Pennsylvania law requiring adult women to notify their spouses before getting an abortion.

"It treats women very much as children," said Planned Parenthood's Karen Pearl of Alito's 1992 ruling, which was later rejected by a majority of the Supreme Court. "Women's autonomy to make personal and private decisions is taken away from them."

During his press conference, Sen. Schumer steered clear of any specific discussion of Alito's record. He restricted himself to asking open questions. "I've always said that a good Supreme Court would have one Scalia and one Brennan," Schumer said, referring to Justice William J. Brennan Jr., one of the court's most liberal jurists. "The question is: Is the president attempting to get five Scalias on the court?"

Schumer was trying to play coy but it was clear he had already made up his mind. Three hours after his nomination, "Alito" was just another way of saying "Scalia."