She's defending the Arctic refuge and calling for Big Oil's help on a "strategic energy fund." But how serious is Clinton about transforming energy policy? 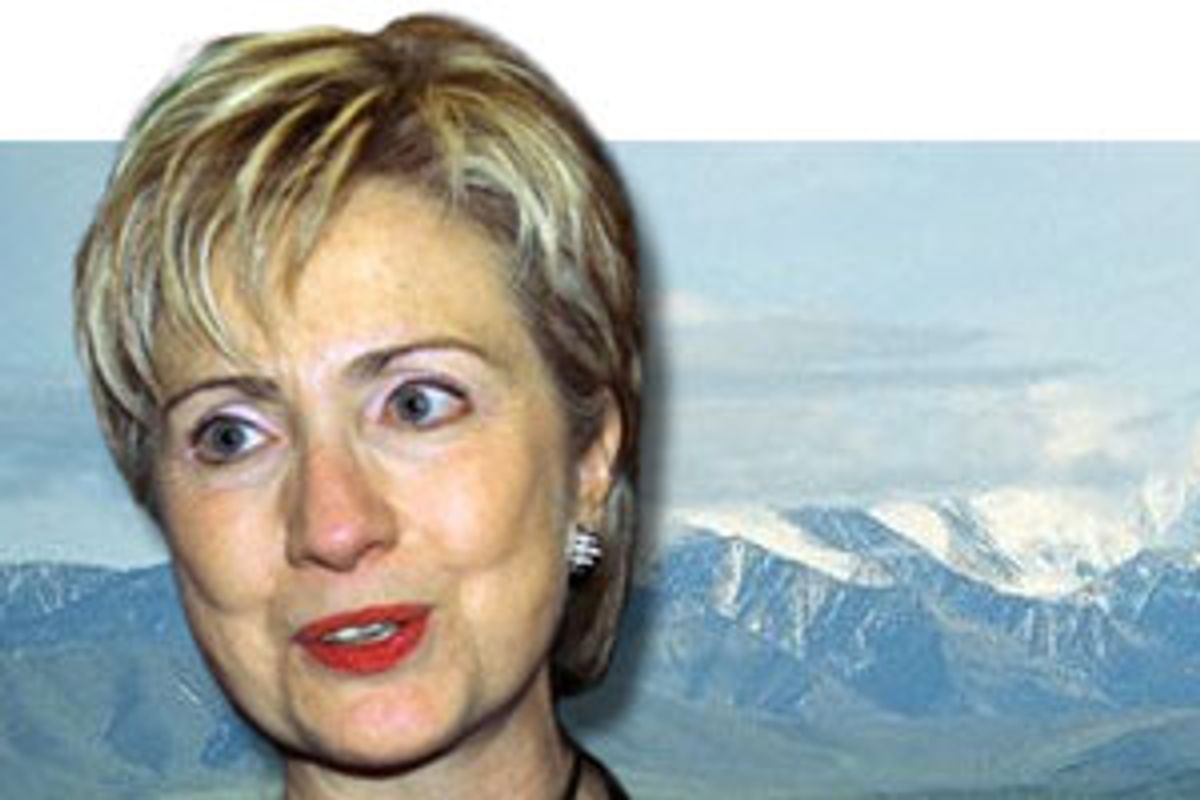 Hillary Clinton has joined a growing claque of both Democrats and Republicans swigging from the cup of clean-energy Kool-Aid as they gear up for the 2006 congressional elections. In the past two months, the New York senator has popped up at a major Arctic National Wildlife Refuge rally, a high-profile global-warming conference and a clean-technology investor symposium to make fervent calls for a cleaner, greener energy policy.

In a speech delivered in late October to a group of investors gathered at the Cleantech Venture Forum in Washington, D.C., Clinton staked out her ground, outlining a plan "to get America on track for a smarter, more secure and cleaner energy future." She argued that Hurricanes Katrina and Rita "have exposed the administration's policy for what it is -- using an umbrella to fend off a hurricane," and proposed that Big Oil, now raking in sky-high profits, pay fees that could add up to $20 billion annually for a "strategic energy fund" that would defray soaring home heating costs and bankroll alternative-energy development. Clinton called for doubling current tax credits for the purchase of hybrid and clean-diesel vehicles, and proposed that the feds stop buying "old-fashioned" cars and trucks by 2010 and start replacing government fleets with cleaner, more efficient models.

This summer, Clinton joined Sen. John McCain, R-Ariz., and two other senators for a tour of Alaskan areas hard hit by climate change. In September, she vigorously denounced plans to drill for oil in the Arctic refuge. "Some might say, 'Well, Senator, we have gas prices going up -- don't we need to drill in the Arctic Wildlife Refuge?' And of course the answer is that we do not," she said. "The answer is that we need to break our addiction to foreign oil."

These efforts mark a strategic shift for Clinton. Although she has served on the Environment and Public Works Committee since joining the Senate in 2001 and has consistently voted in support of environmental protections (her average League of Conservation Voters rating for her first four years in office is 91 percent), only recently has she begun to take a leading role on green issues.

"Her voting record is strong, but she's been cautious about getting out in front of any particular policy proposal," said Kevin Curtis, vice president of the National Environmental Trust. "She hasn't been, say, a Barbara Boxer or a Jim Jeffords" -- two senators known for their eco-leadership. "We're hoping this is the turning point. She's got tremendous clout and influence in the Senate, and may be in a better position to bring political momentum to this issue than any other Democrat."

Curtis was one of dozens of green leaders who got a targeted e-mail message from Clinton -- presumably an effort to shore up her support among enviros -- trumpeting her call for "a new national energy strategy" and "an alternative-energy development fee" on oil companies, just hours after she gave her Cleantech speech. Energy looks increasingly likely to be a key issue for Clinton not just in her 2006 Senate reelection campaign, but in her much-anticipated bid for the 2008 Democratic presidential nomination. She has been careful, however, to couch her energy vision largely in terms of its economic and security advantages, giving less prominence to environmental benefits -- perhaps because they might detract from the hawkish persona she likes to project.

Clinton's newfound enthusiasm for energy is likely also spurred on by the efforts of some of her political foes to seize the issue. Fox News pundit Bill O'Reilly is one recent right-wing convert to conservation. "You can get fuel efficiency by demanding efficiency out of Detroit," he said during an Oct. 24 radio broadcast, radically departing from his usual regulations-be-damned rhetoric. "You know, the government has a right to protect the environment, and it is a national security issue, so they can say to Detroit, 'Look, we know you have the technology to do it. And if you have [cars that get] 30 [miles per gallon] and up, we'll, you know, we encourage you. And if you don't, then we're going to tax your vehicles more because they're harming our country.' The government has a right to do that."

In the weeks after Hurricane Katrina, even the Bush administration talked up energy conservation and introduced Energy Hog, an antihero mascot meant to remind Americans to curb their consumption.

Prominent members of Clinton's own party are getting in the game too. Sens. Joe Lieberman, D-Conn., Barack Obama, D-Ill., Harry Reid, D-Nev., and Maria Cantwell, D-Wash., have lately been delivering ever louder clean-energy messages. Last month, Lieberman unveiled a plan that calls for oil savings of 5 million barrels a day by 2015, as well as the mass production of alternative-fuel and hybrid vehicles. Two weeks ago, Obama introduced legislation calling for a renewable diesel standard that would require the production of 2 billion gallons of alternative diesel a year by 2015.

"The race is on to see who will own the energy issue in the coming year," said Karen Wayland, legislative director for the Natural Resources Defense Council. The triple whammy of Katrina, record-high gas and heating-oil prices, and intensifying conflict in Iraq "is making energy one of the top election-year priorities," she said. "It could be a deciding factor in the Democratic battle to reclaim control of Congress in 2006."

In mid-October, Senate Minority Leader Harry Reid anointed Cantwell to head up development of a broad Democratic platform proposal dubbed "Energy Independence 2020." Reid staffer Jon Steinberg described it as "part of a concerted effort as we look toward the 2006 campaigns to show voters that Democrats offer an alternative to the GOP's current do-nothing approach." It sounds good -- an effort to wean America off foreign oil in the next 15 years -- but so far looks like a repackaging of a few ideas that failed to make it into the energy bill, with no fresh policy proposals.

Clinton's plans are short on policy particulars, too. Conspicuously absent from her commentaries on energy thus far have been calls for higher auto fuel economy standards or caps on emissions of heat-trapping greenhouse gases. Despite requests for this story, Clinton's office declined to provide more detail on her energy plans.

"We're excited to see heightened interest in efficiency goals across the board," said Curtis. "But where's the beef?"

And where were leading Democrats this summer when the energy bill chockablock with Big Oil handouts -- and embarrassingly weak on support for renewable energy and efficiency -- was being rammed through Congress? In June, Sen. Dick Durbin, D-Ill., introduced an amendment to the bill that would have moderately increased fuel economy standards for automobiles, but it got support from only 28 senators -- not including Clinton and John Kerry, D-Mass.

"It was clear that the amendment didn't have enough votes to pass," explained Wayland, "so some Dems decided they didn't want to expend political capital on a vote that would alienate potential campaign support from Detroit."

In the end, more than half of Democrats in the Senate voted in favor of the full energy bill, including Durbin, Lieberman, Obama and Cantwell. If Clinton wants to be a leader on clean, forward-looking energy policy, she could start by convincing her own Democratic colleagues.

With its anger over soaring fuel costs and anxiety over U.S. dependence on foreign oil, the nation is primed as never before to hear substantive new energy proposals. Whether Clinton -- or any other leader, Democrat or Republican -- can meet that demand with more than lofty rhetoric remains to be seen.