How much of the money given to Cheney's former aide will come from Halliburton et al.? The public now has no way to know. 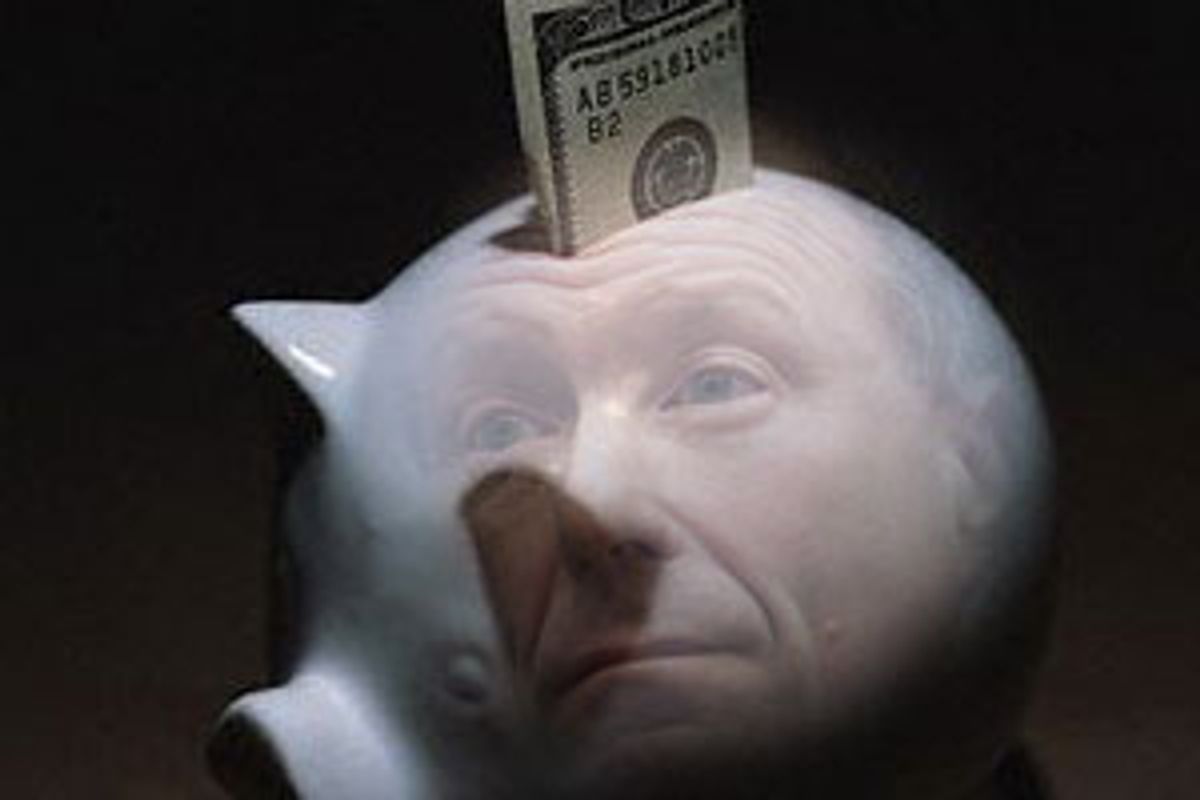 I. Lewis "Scooter" Libby may have taken the perp walk for the Bush White House, but he will never walk alone. As the former chief of staff to Vice President Dick Cheney considers his options -- including possible cooperation with special prosecutor Patrick Fitzgerald -- friends of the administration are rallying to his side. Unlike his old boss Cheney, the indicted Libby lacks the millions of dollars needed to mount a proper Washington scandal defense, but evidently he will have no trouble attracting the assistance of right-wing operatives, administration aides and Republican lobbyists.

Actually, someone who personifies all those categories and more has materialized to mastermind the Scooter Libby defense committee, with promises of financial assistance and supportive publicity.

Her name is Barbara Comstock, a minor figure from the Whitewater era, when she served as "chief investigator" for Rep. Dan Burton, the wigged-out Indiana congressman who once executed a watermelon to demonstrate his sinister theory concerning the fate of Vince Foster, the White House counsel who committed suicide in 1993. During those glory years, she joined David Brock and the rest of the Republican pack in the hunting of Bill and Hillary Clinton. In his memoir, "Blinded by the Right," Brock described Comstock as almost unhinged in her passion to bring down the Clintons.

Comstock calmed down enough to serve as director of public affairs in John Ashcroft's Justice Department, to run opposition research for the Republican National Committee and, ultimately, after leaving government, to join the powerhouse lobbying firm of Blank Rome, best known for its huge contributions to the Republican Party, its close association with former Homeland Security Secretary Tom Ridge and other Bush appointees, and its lucky clientele of DHS contractors.

Is there something wrong with this picture? The most illuminating way to answer that question, perhaps, is to imagine what Comstock and others of her ilk might have said if the same situation had obtained during the Clinton administration.

Of course, nobody with the same rank as Libby was indicted back then, and nobody who worked for Clinton ever exposed a clandestine CIA agent for partisan purposes, as Libby did in the case of Valerie Plame Wilson. But certainly there were plenty of scandals and investigations back then, and lots of expensive lawyers to pay. There were defense funds, including the massive Clinton Legal Expense Trust, which collected money to pay the former first family's multimillion-dollar legal bills.

Democrats made donations large and small to that fund, some of which became highly controversial and sparked congressional investigations. In fact, the Clinton trust hired a private investigator to look into a donor named Yah Lin "Charlie" Trie, who was suspected of seeking to influence the president.

Outraged accusations of corruption rang across Capitol Hill and the talk show airwaves, although no misconduct was ever charged, let alone proved. Every donation and expenditure of the Clinton defense trust was carefully recorded in a publicly available document whose contents were widely and regularly reported in the media. The trust's director testified under oath in the Senate about its operations. That didn't satisfy the loonies of the Rush Limbaugh persuasion, who still believe to this day that the fund was somehow used unethically (even though Clinton left office with millions in debt to his attorneys).

Then there was the matter of Webster Hubbell, the associate attorney general in the Clinton Justice Department who eventually went to prison for stealing from Hillary Rodham Clinton and his other former partners at Little Rock's Rose Law Firm. Before he was indicted but after he left Justice, Hubbell got legal work from various companies, with the help of Washington power broker and Clinton confidant Vernon Jordan, among others.

Republican politicians and pundits loudly denounced those arrangements as a form of bribery to ensure Hubbell's silence. But after years of investigation, Ken Starr could never charge anyone with seeking to pay off Hubbell, who did his time insisting that he knew no incriminating information about the Clintons. It was perfectly natural for the Republicans to suspect the use of hush money, since that had been the modus operandi of their beloved "Tricky Dick" Nixon, dating back to the Watergate scandal.

But now the scandal worm has turned again, with a vengeance. If the Libby indictment is to be believed, the vice president and Karl Rove, the president's chief political advisor, may be implicated in nefarious misconduct that included a serious breach of national security. At the very least, they should both be asked to resign. They and others could be subject to prosecution should Libby ever decide to purge himself of his alleged perjury and obstruction charges in a plea agreement with prosecutor Patrick Fitzgerald.

But Libby's resistance to any such dangerous deal could be enhanced by two factors: the promise that he and his family will not be bankrupted to pay for his defense, and the prospect of a pardon before George W. Bush leaves office. Such self-serving abuse of the pardon power would follow the pattern set by Bush's father in his last-minute reprieve of former Defense Secretary Caspar Weinberger in the Iran-Contra affair.

That is why Democrats have demanded that the president promise to not pardon Libby -- a demand that ought to be the subject of press questions to the president himself, just as reporters regularly used to ask Clinton whether he intended to pardon Whitewater figure Susan McDougal. (He did finally pardon McDougal, long after she had served 21 months in prison and Starr had acknowledged that there was no case against the Clintons in Whitewater. Clinton didn't grant a pardon to Hubbell, who didn't ask for one.)

Meanwhile, the emergence of Comstock, a corporate lobbyist and Bush loyalist bearing checks with Libby's name on them, is troubling. Unlike the Clinton defense trust, the Libby fund is under no obligation to report the names of donors or the amounts they give. And the public has no way of knowing how much money might be funneled to the Libby defense by the vice president's friends at Halliburton, ExxonMobil and the myriad other corporations and lobbying firms that have fattened themselves on Iraq, Hurricane Katrina and the other disasters of the Bush era.

No way, that is, unless Fitzgerald finds probable cause to subpoena the records of the Libby defense fund. Certainly his investigation should continue until the special prosecutor can be certain that the coverup and the obstruction of justice have ended.