Defiant of rising political blowback on Iraq, Bush blasts his truth-telling critics as traitors to the cause. 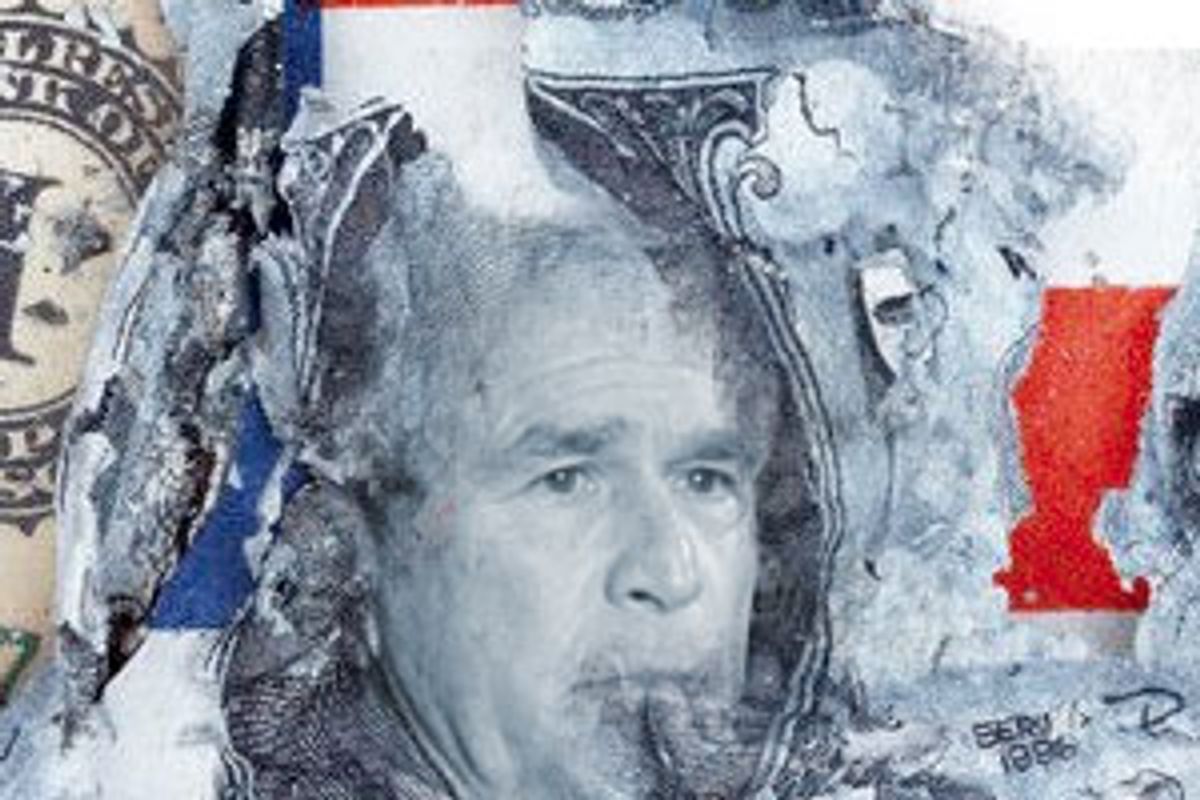 One year ago, after his reelection, President Bush brashly asserted, "I earned capital in the campaign, political capital, and now I intend to spend it. It is my style." Twelve months later, Republicans were thrashed in elections for the governorships of Virginia and New Jersey. In St. Paul, Minn., the Democratic mayor who endorsed Bush for reelection a year ago was defeated by another Democrat by a margin of 70 to 30 percent. Then Republicans in Congress split into rancorous factions and failed to pass Bush's budget. That was followed by the Senate's rejection of Bush's torture and detainee policy and by overwhelming passage of a resolution stipulating that the president must submit a strategy on withdrawal of U.S. forces from Iraq.

The turn in public opinion against Bush has been slowly considered and is therefore also firm. Now a majority believes his administration manipulated prewar intelligence to lead the country into the Iraq war, and nearly two-thirds disapprove of how he has handled the war. His political capital appears spent with more than three years left in his term. He has retreated from the ruins of his grandiose agenda into a defense of his past.

In the immediate aftermath of the fall of Baghdad, Bush was the man of action who never looked back, openly dismissive of history. When asked shortly afterward by Bob Woodward how he would be judged on Iraq, Bush replied, "History. We don't know. We'll all be dead." But his obsessive interest in the subject is not posthumous. The Senate's decision last week to launch an investigation into the administration's role in prewar disinformation, after the Democrats forced the issue in a rare secret session, has provoked a furious presidential reaction.

On Veterans' Day, Nov. 11, Bush addressed troops at an Army base: "It is deeply irresponsible to rewrite the history of how that war began." He charged that "some Democrats and antiwar critics are now claiming we manipulated the intelligence and misled the American people," even though they knew "a bipartisan Senate investigation found no evidence of political pressure to change the intelligence community's judgments related to Iraq's weapons programs." In fact, the Commission on the Intelligence Capabilities of the United States Regarding Weapons of Mass Destruction was not authorized to look into that question, but only whether the intelligence community was correct in its analysis. Moreover, the Senate Intelligence Committee under Republican leadership connived with the White House to prevent a promised investigation into the administration's involvement in prewar intelligence. Its revival by Democrats is precisely the proximate cause that has triggered Bush's paroxysm of revenge.

Several days later, Bush spoke before troops at Elmendorf Air Force Base in Alaska, where he stated that "some Democrats who voted to authorize the use of force are now rewriting the past," and are "sending mixed signals to our troops and the enemy." U.S. soldiers "deserve to know that their elected leaders who voted to send them into war continue to stand behind them," Bush admonished. His essential thrust was that as "a ruthless enemy determined to destroy our way of life" besieges us from without, the most insidious undermining comes from within. Thus an American president updated the "stab in the back" theory first articulated in February 1919 by Gen. Erich Ludendorff, who stated that "the political leadership disarmed the unconquered army and delivered over Germany to the destructive will of the enemy."

The former Republican Speaker of the House Newt Gingrich, a member of the Defense Policy Board, always notable for his visions, has compared George W. Bush in his travails to Abraham Lincoln before Gettysburg. Gingrich, who has recently written a series of counterfactual novels depicting a Southern triumph in the Civil War, communicated his latest flight of fancy to a longtime former diplomat who has served under Republican and Democratic administrations alike. The diplomat, who asked to remain anonymous, recounted their conversation to me. "We are at war," insisted Gingrich. "With whom?" the diplomat asked. "The Democrats," Gingrich replied without hesitation. For Gingrich, ever the Republican guru, history is a plaything of the partisan present.

In Rome last week, a leading Italian political figure of the center-left told me he was opposed to the withdrawal of U.S. forces from Iraq -- contrary to the public stance of the left coalition. According to his reasoning, Iraq has become a magnet and training center for terrorists, and if the U.S. withdraws the terrorists might come to Europe. I later learned that this was a common analysis of European intelligence agencies as well.

Bush's adoption of the Ludendorff strategy of blaming weak politicians for military failure and exalting "will" sets him at odds with liberal democracy. His understanding of history also clashes with the conservative tradition that acknowledges human fallibility and respects the past. Bush's presidency is an effort to defy history, not only in America, writing on the world as a blank slate. The New Deal can be abolished without consequences, Arab states can be transformed into democracies if only they will it. Now he wants to erase memory of his actual record on the war, substituting a counterfactual history. "Fellow citizens, we cannot escape history," said Lincoln. Never mind.