Larry David talks about his eco-activist wife secretly giving away his car, the painful switch to non-virgin toilet paper -- and why he joined the fight against global warming. 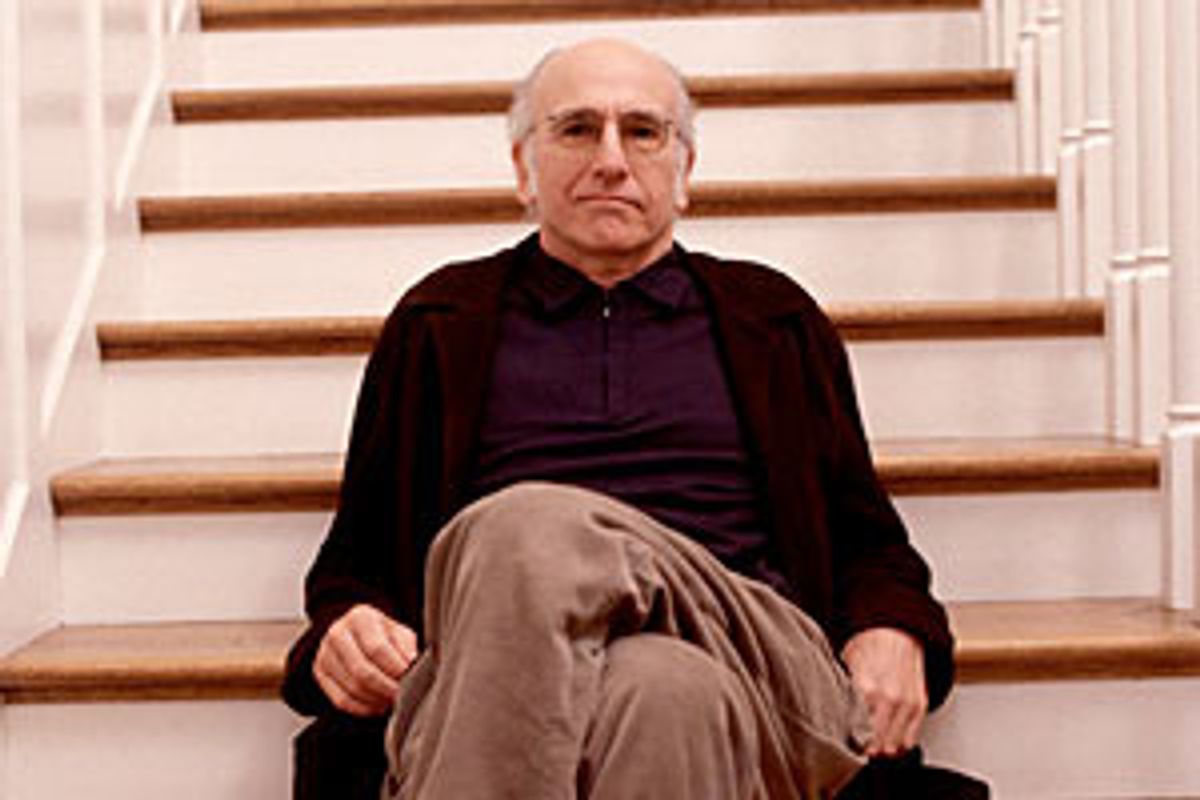 This Sunday night you may find yourself crying over global warming -- in conniptions of laughter -- thanks to Larry David, co-creator of "Seinfeld" and creator and star of "Curb Your Enthusiasm," and his eco-activist wife, Laurie David. At 8 p.m. (7 p.m. central) on Nov. 20, TBS will air "Earth to America," a two-hour comedy extravaganza produced by Laurie and starring Larry that is designed to get America laughing -- and, more to the point, learning -- about global warming. They promise it will be an upbeat, non-preachy, gut-splitting TV special on one of the least funny issues on the planet.

The global warming yuk-fest has an all-star roster, featuring Will Ferrell, Jack Black, Cameron Diaz, Tom Hanks, Steve Martin and Ben Stiller, among many others. Writers from "The Daily Show," "The Simpsons," "King of the Hill" and "Everybody Loves Raymond" conspired to help with the event, which will be staged live at Caesar's Palace in Las Vegas.

Earlier this week, America's favorite curmudgeon, Larry David, talked by phone from his home in Los Angeles, with some inside dish on the show.

What's your 20-second pitch for "Earth to America"?

Yeah, why should America watch this?

Well ... [Disgruntled laughter.] I'm not used to being a salesman. This is why I don't do media. I don't even sell my own show. I wouldn't be doing this in a zillion years if it weren't for my wife.

You should watch it because if you don't really know much about this subject, this is a very easy, painless and entertaining way to get some information about global warming -- and also see great comedy. There's a lot of different comedy in the show, some of it is stand-up, some of it is sketches, some of it is taped pieces. Most of it is on subject, and all the contributors have found ways into this issue that are entertaining and provocative and stimulating.

Did I answer that question? I'm trying to turn up the bullshit machine here.

Really, though, there's a lot of great stuff in the show. Even if they didn't introduce it as a show about global warming, it would be funny enough on its own, just as a comedy special.

"Seinfeld" and "Curb" are famously shows "about nothing" -- or about minutiae, the tiny indignities of modern life. But global warming is so huge that people can't get their minds around it. How are you going to make it funny?

Well, global warming is a -- it is the -- big indignity of modern life. People have used humor since the beginning of time to cope with tragedy. There are always angles in every subject to find the comedy in it, and in "Earth to America" all the contributors succeeded at that.

How do you walk the fine line between using comedy to make this scary issue feel manageable and accessible on the one hand, and on the other mocking or trivializing it?

Walking the fine line is what good comedy is all about. You want the subject to be provocative enough that the finer the line, the funnier it will be -- without actually going over it. You walk up to the ledge. That's where you should take an audience: right to the ledge.

Could you give an example of a skit that goes to the ledge on global warming?

No, you've got to watch it.

OK, here's one that didn't fly: Initially, I was going to open the show with me sitting around a campfire talking to a bunch of little kids. It would be at night, they would be roasting marshmallows, and I'd be telling the proverbial ghost story. But mine would be about global warming: "The earth is going to get so hot you'll have to wear 12-inch rubber soles on your sneakers so it doesn't burn a hole through them." And I would scare the pants off every single one of them. And they'd all start screaming and crying and the parents would come and yell at me, and that's how the show was going to open.

For one thing, it actually came true with Katrina. Because part of that story was going to be hurricanes, you know, the kids having to live in underwater homes. So I couldn't do it. In that case, I would have been over the line.

I remember a scene in "Seinfeld" where Russell Dalrymple, an obnoxious TV exec, becomes so infatuated with Elaine that he joins Greenpeace in a ridiculous effort to win her heart. He goes aboard a dinghy that's chasing a whaling ship and then gets struck by a stray harpoon and dies. It's a tragicomic portrait of the eco-warrior, in which Dalrymple is not only disingenuous but his acts are ultimately pretty futile. What percentage of the environmental movement, would you say, is made up of Russell Dalrymples?

I think that anyone who devotes their time to this issue has got to be sincere. I mean, I can't imagine spending my life doing something that wasn't even paying me any money without being passionate about it. [Laughter.] That just seems insane! So I can't very well say that there are people in this movement who aren't sincere.

Yeah, I suppose environmental advocates have a reputation for taking themselves too seriously, actually -- they're wracked with save-the-world complexes and riddled with paranoia about the consequences of their every action. I guess that makes them rich fodder for satire.

Of course they're rich fodder for satire! That's just the price they have to pay for being out there. But we need them.

If only you could start some kind of funny camp for activists, so they would annoy everyone less.

On the other hand, if they weren't annoying people, the public wouldn't really know about the problem. I don't mind them being, you know, annoying -- which is your term -- but the fact is we need those people. I'm the first to admit I'm not the one who's out there at the rallies and in the courtrooms forcing change.

I loved your "Why I Am Marching" post on the StopGlobalWarming.org Web site, where Laurie is organizing a virtual march on Washington to protest climate change.

What it says is: "The virtual march is a perfect opportunity for the lazy man to do something good without having to expend any effort. This thing was made for me."

It seems you've been dragged kicking and screaming -- or at least protesting -- into the role of environmental advocate by your wife. Is it safe to say that you wouldn't be discussing this issue if it weren't for her?

I started out doing this to support my wife, but you'd be surprised: The more you're around a subject, the more it starts sinking in. You can't help it, it's just by osmosis. It's discussed in my house 24 hours a day. So, I'm becoming educated about this issue just by living in this house, as are my kids. And it's become impossible now that I'm educated about it to completely turn my back on it, the way I do about most things.

What are some of your environmental concerns -- or neuroses?

Well, my toilet paper's been changed. That's been a hell of a struggle. Laurie switched brands on me so it doesn't use the virgin trees.

You prefer the fully quilted variety?

Yeah. I'm finding [the other kind] a little rough.

Tell us how your "Curb Global Warming" campaign came to be. I've seen the commercials where MTV is hauling away your car, and you find out Laurie gave it away without telling you. True story?

True story. I came into my office one day and my assistant asked what I was going to do for a new car. And I said, "What are you talking about?" She said, "Your wife gave away your car." MTV is working with Laurie to promote the "Stop Global Warming" campaign, so my car is the prize in a sweepstakes for MTV viewers who sign people up for the march.

Sounds like a scene plucked from an episode of "Curb." I'm assuming this sort of trick isn't out of character for your wife.

Let's just say I was surprised, but not shocked.

When your wife starts getting attacked by right-wing radio hosts, is it going to piss you off, or give you great material?

Well, anything I hear on right-wing radio pisses me off, but I guess that would piss me off just a little bit more. But you know what? Conservatives really like my show! Tony Blankley and Ann Coulter and others have said some nice things, I guess because the humor is not politically correct. Because of the show, they can't believe I'm liberal. They don't think liberals have a sense of humor.

Laurie has been known to flip off Hummer drivers on the highway and take people directly to task for their bad eco-habits, with the idea that this kind of peer pressure is a critical part of the solution. What is the best way to get America to wake up and demand change?

Well, if you're talking about changing policy, I guess the examples of the '60s -- sit-ins and protests and taking over buildings -- certainly got people's attention and helped change the government's policy on the war. But people have to recognize that there's a problem in the first place. You need to make people aware that a problem exists, but without talking down to them. Without being preachy. I refuse to be a part of being preached to. That's what "Earth to America" is all about.