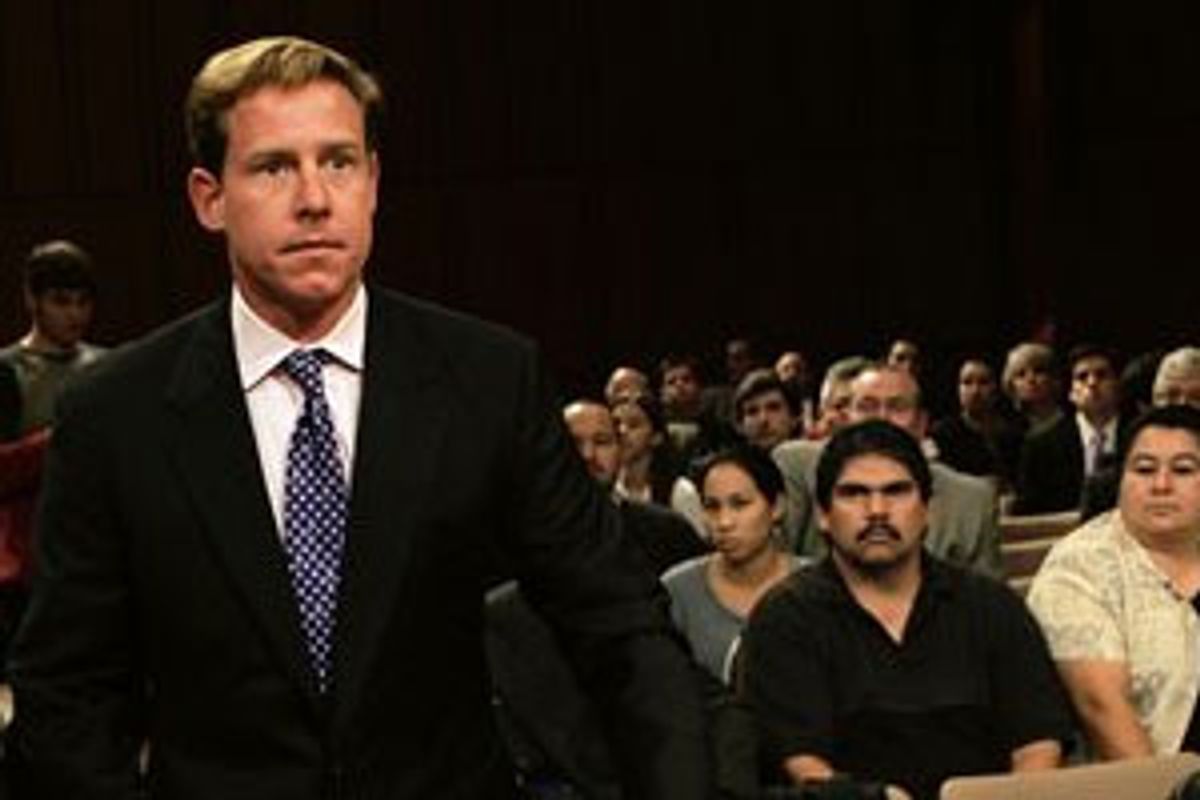 Morning Briefing:
Kelly Osbourne hates rich kids: Kelly Osbourne has no kind words for Paris Hilton's boyfriend, Stavros Niarchos, after he trashed a hotel room at the Hard Rock Hotel in Las Vegas. Not that Osbourne minds the destruction -- it's just that she was trying to have a party in a suite a few floors up and had to evacuate with everyone else when Niarchos' antics set off the fire alarm. "Paris's stupid boyfriend ruined my 21st birthday," she tells U.K. gossip column 3am Girls. For some reason, she says, the hotel manager tried to make her pay for the damage, but she told him to go find Niarchos. "He has enough money -- he's a millionaire with too much spare cash," Osbourne said of the 20-year-old shipping heir. "He's a rich kid, and they don't appreciate anything because they grow up with it all. I find it really annoying." Then again, the 3am Girls reveal, Osbourne might not be one to talk: Her parents just gifted her with a $1.7 million pad in London. (3am Girls, Hello!)

And then there was one: Brittany Murphy's "people" have shrunk to just "person" -- earlier this week, she was dropped by her manager, ICM's Jeff Berg, and her agent, Brillstein-Grey's Joanne Colonna, in the same day, leaving her solely with a publicist, Holly Shakoor. Shakoor instantly got to work denying that Murphy was fired: "It was a mutual departure based on the fact that they're going in different directions." Sources tell Radar Online, though, that Murphy was let go for "personal" reasons. The announcement's timing ain't great, as it followed right on the heels of a not-so-very-blind item in Ted Casablanca's online gossip column about a starlet and a waiter in a stairwell at an industry party (you get the picture). Casablanca gave his victim the see-through nickname of Jordache Junky -- Murphy was named the first celebrity face of the jeans line in July and has dodged drug rumors for some time. (Radar Online, Ted Casablanca, Associated Press via ABC News)

No happy ending for Disney's year: Stung by poor returns on some of its studio's returns -- among them, the soon-to-be-gone Miramax -- Disney's quarterly earnings were down 26 percent from the same period last year. Don't cry for Disney yet: The company still posted $379 million in net income for the quarter. It was the movie division that dragged the conglomerate down, with bombs like "The Great Raid," "The Brothers Grimm" and "The Underclassman" leading to losses even greater than Disney's own projected $250 million to $300 million. (Hollywood Reporter)

Also:
James Doohan, the actor who played Scotty on "Star Trek," will have to wait to be beamed up: The plans to send his ashes into space have been pushed from Dec. 6 until February because, in a very Scotty-like move, engineers on the rocket that will transport him (and others) "wanted to do some more engine tests." (MSNBC) ... It's Russell Crowe's day in court in Manhattan on Friday, where he faces charges of assault and criminal possession of a weapon over his alleged phone-throwing incident at the Mercer Hotel in June. (Associated Press) ... Pamela Anderson, after kicking her Kid Rock habit, has a new flame: ex-Sugar Ray frontman Mark McGrath. (Softpedia) ... Because nothing goes together like a DVD and a pack of Marlboros, attorneys general from 32 states are asking Hollywood to start including anti-smoking public service announcements on all DVDs that prominently feature smoking. (News 24) ... Star Jones' plaything/husband Al Reynolds, taking a page from the Paris Hilton playbook, strikes a pose and sticks to it. (City Rag via Gawker)

Money Quotes:
Kanye West comparing his decisions to speak out against President Bush and to call for an end to homophobia: "People said to me, 'Were you scared of speaking out against George Bush?' No. The bravest thing I did this year was speaking out against homophobia. That's a scarier topic, because if you bring it up, people think you must be gay. But you don't have to be gay to not gay-bash. We're a very close-minded people." (King Magazine via N.Y. Daily News)

Pete Doherty on his second -- and, until recently, secret -- love child: "Poor little fucker. My sister sees him all the time, so there's affection as a family for him. I don't really want to go into that because it's not fair on the kids or the mother." (FemaleFirst)

Get more of The Fix here.
To send a hot tip to The Fix, click here.