A beefy George Clooney is marvelous as a CIA agent caught up in a Middle Eastern oil intrigue, but this political thriller is too complicated for its own good. 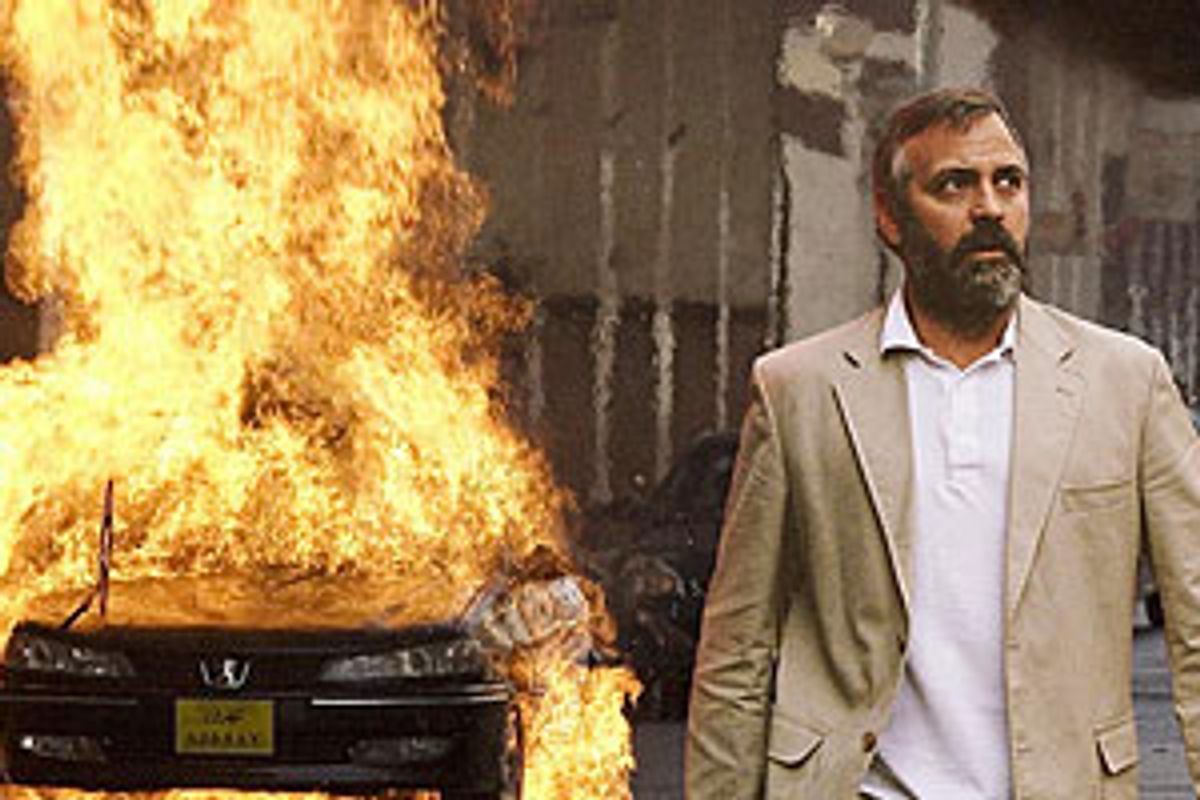 If you've seen the trailer for "Syriana" -- and have even half a memory of the way one character declares, "Corruption is our protection. Corruption keeps us safe and warm. Corruption is why we win" -- then you already know pretty much everything about the movie's intentions and its ultimate message. This is a political thriller with a laundry list of viable points to hit: The United States will stop at nothing to protect its oil interests; the CIA is willing and able to carry out vile deeds, sometimes by taking advantage of the loyalty and dedication of its employees; and there are infinite ways for big corporations to manipulate the Justice Department so they can do whatever they please and still appear to be operating within the letter of the law.

The seriousness of "Syriana" is its chief selling point; it's a solemn, ruminative piece of work whose entertainment value -- if that's what you're looking for -- rests solely in the way its writer and director, Stephen Gaghan, keeps its multiple story lines clicking forward at once, sometimes swerving into one another, sometimes just chugging along on parallel tracks. This is a movie made for grown-ups. It doesn't waste time or insult our intelligence with needless explication; it drops its crumbs of information scene by scene, always staying two or three steps ahead of us.

But Gaghan's faith in our ability to read this trail of crumbs accurately is a mixed blessing. "Syriana" often feels more complicated than it needs to be, and there are too many places where its willful complexity undercuts what the actors are doing. There's something a little showy about the way Gaghan -- who wrote the script of Steven Soderbergh's "Traffic," a similarly complicated picture but a far more immediate one -- presents us with so many somber winks and feints as we try to process the motives and machinations of the movie's numerous key characters. It's as if Gaghan knows we're up to the challenge he's handing us and yet secretly hopes we're not -- maybe because the more confused we get, the smarter he looks.

The geographical nexus of "Syriana" is a fictional oil-rich Gulf country, whose aged emir is preparing to step down. The eldest of his two sons, Prince Nasir (Alexander Siddig, who, in neat shorthand strokes, deftly defines a character who's both glamorous and principled), is next in line for the throne; he's more interested in social and economic reform for his country than in catering to U.S. business interests, which is why he grants natural-gas drilling rights to a Chinese company instead of renewing the country's long-held contract with Connex, a huge Texas energy conglomerate.

Anxious to maintain its foothold in the Middle East, Connex instigates a merger with a smaller Texas oil company, Killen (its owner is played by Chris Cooper), which has drilling rights in Kazakhstan. Bennett Holiday (Jeffrey Wright), a young lawyer with a prestigious Washington law firm, has been assigned to perform due diligence on the companies, learning the wormy nooks and crannies of their international business dealings. Meanwhile, a young energy analyst (Matt Damon) with a small Swiss trading company, approaches the emir on behalf of his firm, hoping to land a consulting contract. When one of Damon's young sons dies in an accident at a party thrown by the emir, Prince Nasir awards him the consulting gig as a way of making amends. The last but possibly most crucial character in this plot, which unfolds like an endless set of nesting dolls, is longtime CIA agent Bob Barnes (George Clooney), a dutiful government foot soldier who's been working for years in the Middle East.

For the most part, it's remarkable that Gaghan sustains the logic of these numerous plot threads as well as he does. (Yet another subplot involves a young Pakistani man, Mazhar Munir, who loses his job in the oil-drilling fields and, bitter and frustrated at his inability to make a living, comes under the sway of an Islamic fundamentalist.) This is a picture with strong political convictions, and Gaghan's dedication to those convictions generates its own persistent whine of electricity. But Gaghan is more interested in building a teetering pile of ideas than a compelling drama. There's so much going on in "Syriana" that the performers often get lost in all the criss-crossing traffic. And, much as "Syriana" pretends not to have black-and-white heroes and villains, it's obvious who the bad guys are: When Chris Cooper, at a meeting of bigwig executives, asks, "What is an emir, anyway?" he pronounces the word, in a slithery Texas drawl, "E-murr," as if he thinks it's some sort of exotic animal. Cooper is a wonderful actor, capable of far more subtlety than that. But he seems to be doing exactly what the movie asks of him, which isn't much.

It's entirely possible that Gaghan just isn't an actor's director. He's certainly more interested in structure than in storytelling, which may serve him well enough for a movie or two, although the novelty may wear thin after that. But if nothing else, "Syriana" gives us a hint of what Clooney has to offer us as he enters that territory so treacherous for actors, middle age. The politics of "Syriana" are clearly pretty much in line with Clooney's. (He's also, along with Soderbergh and several others, one of the movie's executive producers.) But more than anything else in "Syriana," his performance gives us a sense of what those politics mean emotionally: It gives us a concrete sense of how convictions can shape our lives, or possibly even destroy them. Clooney gained weight for the role, the sort of stunt that usually draws praise by itself, at least as proof of an actor's dedication.

Clooney probably could have played this role just as well without the weight gain, but the extra padding does make him more convincing as a character who's nearing retirement age. Clooney has always been a marvelous romantic lead, and a great charmer in pictures like Soderbergh's "Ocean's Eleven." But with "Syriana" -- as well as with his small, sly role in "Good Night, and Good Luck," which he also directed -- Clooney gives us a glimpse of what we're in for as he stretches the boundaries of his potential. In "Syriana," Clooney carries even more weight in his eyes than he does in his body: We see the way both duty and doubt weigh on him; he tells us a story that stretches far beyond the scope of Gaghan's overextended cleverness. With that extra padding, and with his grayed, grizzled beard, Clooney carries himself like a depressed circus bear. With just the barest wrinkling of his brow, he shows us how being too good at the job he does can be a man's ultimate punishment. Clooney is the soul of "Syriana," and his face is what you're left with long after the movie's obsessive plot details have sifted away.