A dazzling Israeli film renaissance, led by both Jewish and Arab directors, is crowned by the marvelous social comedy "The Syrian Bride." 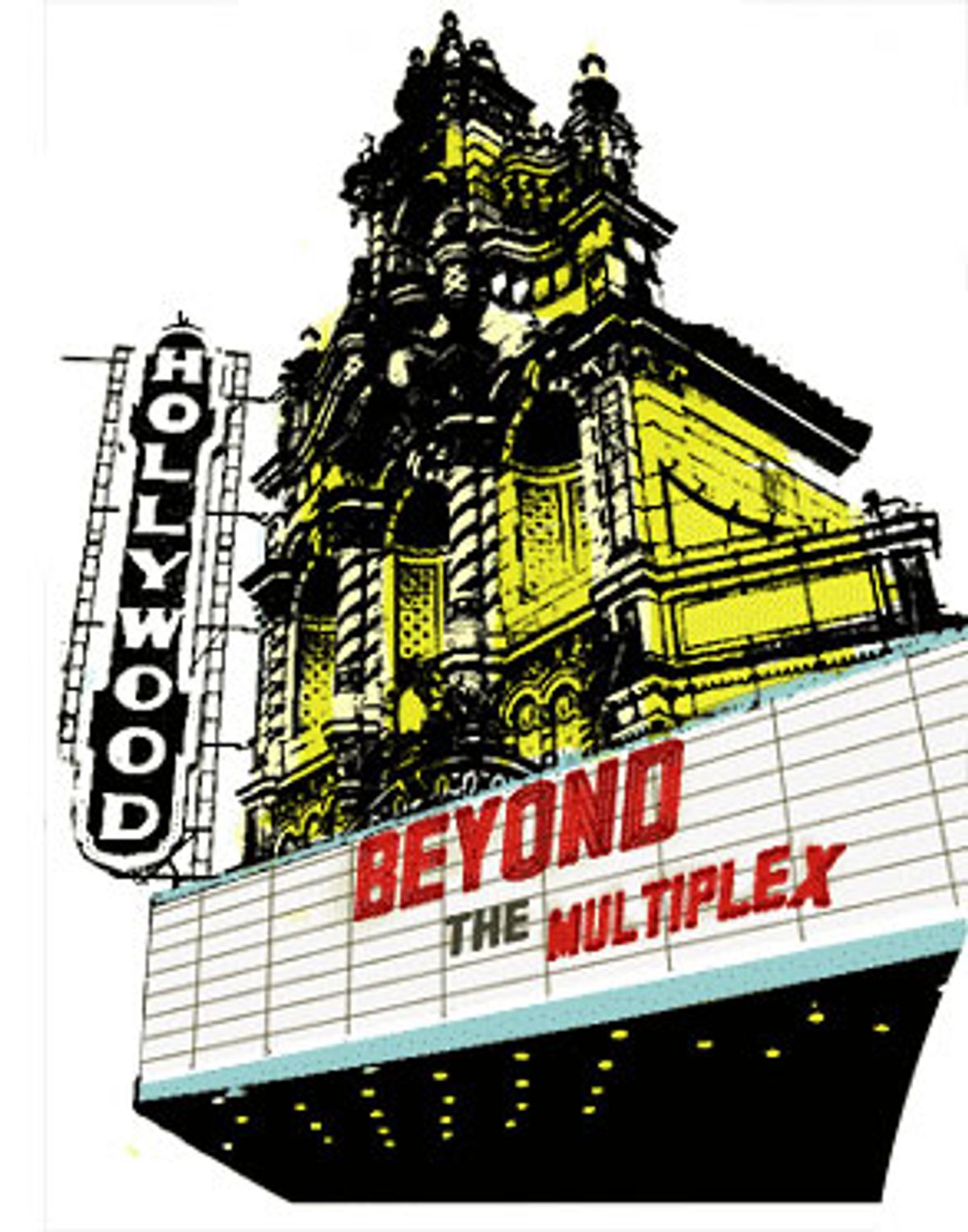 Israeli cinema, says filmmaker Eran Riklis, is enjoying something of "a revolutionary year." On the film festival circuit and in major cities where movies from all over the world play, the evidence is unmistakable. What distinguishes this Israeli new wave -- and if that grandiose term has not yet been applied, let me be the first -- is both its superior craftsmanship and its confident, independent-minded spirit. These movies are made by both Jews and Arabs about both Jews and Arabs (and others). While the political context of the Middle East is necessarily never absent, these filmmakers are committed to transcending, and even subverting, the ideological orthodoxies that have defined Israeli (and Palestinian) life since 1948.

Eytan Fox's "Walk on Water" imagines a surprising friendship between an Israeli intelligence agent and the grandson of a Nazi war criminal. Hany Abu-Assad's "Paradise Now" explores the world of two would-be suicide bombers from the West Bank, who are smuggled into Tel Aviv by an Israeli yuppie driving a BMW. Simone Bitton's documentary "Wall" laconically surveys the enigmatic and vastly expensive security barrier built around Israel (largely by Arab laborers) -- and the director herself insists on identifying as both Jew and Arab. Danae Elon's documentary "Another Road Home" examines the contradictory fallout of the filmmaker's privileged Israeli childhood, when she was raised by a Palestinian man who spent more time with her than with his own children. Gidi Dar's "Ushpizin" penetrates the closed world of Jerusalem's ultra-Orthodox Hasidim, often viewed with prodigious mistrust (and even distaste) by secular Israelis.

That's an impressive assortment even before you add one of the year's truly serendipitous surprises, Riklis' "The Syrian Bride," an extraordinary social comedy set in the Golan Heights, an embattled patch of high ground that used to be Syria and is now Israel (and may very well be Syria again, if the two nations can ever reach a realistic peace agreement). Distribution of all these Israeli films is predictably patchy in the United States if you don't live in or near a major Jewish population center (and even if you do), but it would be a shame if a crop of films this diverse and engaging were perceived entirely as niche-market products. (I mean, let's face it, the number of people willing to see non-mainstream film is niche-y enough already.)

In a phone conversation, Riklis told me that the revolution has been both international and domestic -- that Israeli audiences who weren't much interested in homegrown film a few years ago are showing up enthusiastically to see challenging pictures about their own society and its intersection with the world. While admitting that he's "pretty much your typical left-wing Israeli filmmaker," he sees this moment of breakthrough as signifying a new openness and a sense of what he calls "opsimism" (a guarded combination of hopefulness and realism) about the future of the nation and the region. It's almost always a mistake to draw political conclusions based on cultural product but, hey, this can't be a bad thing. Speaking as your typical American left-wing film critic, the Israeli film renaissance, whatever its causes and consequences may be, is a reason for thanksgiving.

If you sit through "The Syrian Bride" without reading the subtitles or knowing the languages spoken -- those being, let's see, Arabic, Hebrew, Russian and some bits of English and French -- you might think it was a brisk, well-made example of the kind of rural domestic comedy that's been cooked up all over the world for generations. A beautiful girl is getting married in her beautiful white dress, and if you mess with her you will pay. Her father is a crusty character, in trouble with the local pooh-bahs. Her older sister is a budding feminist -- make that a full-fledged one -- stuck in a bad marriage. One brother is a rake, a playboy and an operator, while the other is an outcast with a foreign wife who hasn't come home for many years. Obviously the wedding day is going to bring all these people together and iron out their political and cultural wrinkles in time for a Kleenex conclusion, right?

Well, yes and no. Riklis has taken the conventions of the wedding comedy and adapted them to his own purposes. "The Syrian Bride" is indeed a heartwarming comedy about family reunion, but it's also a steely social and political drama that's always threatening to slide off the map altogether, into absurd and abstract Samuel Beckett territory. That's because all this is happening in a Druze village in the Golan Heights, near Israel's remote northeastern border with Syria, a forgotten and uniquely strange backwater on the Middle East's contested map. The Druze are an isolated Arab people who practice a secretive brand of Islam; most who live in the Golan still regard themselves as Syrian, although their land has effectively been part of Israel since the Six-Day War in 1967.

One of the bizarre ramifications of this is that many Druze have no official nationality. When Mona (Clara Khoury) crosses the border to marry her fiancé -- a Syrian sitcom star she has seen only on television -- she will immediately become a Syrian citizen in Israeli eyes, and (since the two nations remain locked in a cold war over their disputed boundary) will never see her family or her village again. Her father, Hammed (Makram J. Khoury, Clara's real-life father), a pro-Syrian activist, has only recently been released from prison, and so far the local Israeli police commander (Uri Gabriel) won't allow him to travel to the border to see her off.

Mona isn't even considering defying this arranged marriage to a man she's never met that will change her life forever (whether the chronically inept Israeli and Syrian bureaucracies will permit it to happen is another matter), but this family's being pulled in more than one direction. Her brother Marwan (Ashraf Barhoum) spends much of his time in Europe making mysterious "business" deals -- unfortunately for him, he seems to owe someone a great deal of money -- and her brother Hattem (Eyad Sheety) left long ago for a new life in Russia with his wife and child. In some ways Mona's story is just a smoke screen anyway: The real hero of "The Syrian Bride" is Amal, her older sister, played by the stern but stunning Arab-Israeli-French actress Hiam Abbass.

Best known for her star role as a mother turned belly dancer in the 2002 Tunisian film "Satin Rouge," Abbass is the first great actress Arab cinema has produced who transcends and even defies feminine convention. With her piles of dark hair, proud carriage and deep-set eyes, she is both sexy and a little careworn; in all her roles, she seems perennially on the cusp between rebellious youth and resentful middle age. Amal is, or ought to be, her breakthrough performance. Until now, Amal has accepted her lot as Druze wife and mother, although she wears Western clothes and largely ignores her husband's directives. But Mona's impending marriage has galvanized her toward the outside world; on the day of the wedding she has received an acceptance letter from an Israeli university.

"Hiam Abbass was a revelation for me," says Riklis. "The difficult part about casting this movie was finding a woman in her late 30s or early 40s who was strong and soft and interesting. I was casting in Paris, and in walks this woman who starts talking to me in Hebrew. A few minutes after meeting her I could see that her life and her character's life are similar. Not identical as to the details, but she is a strong woman who feels trapped in tradition, who wants a way out of it without creating chaos. So, you know, it was one of those things: I turned to my producer and said, 'This is it. We're done. This is my actress.'"

All this comes in a high-energy, crisply paced and often very funny picture that is beautifully filmed in CinemaScope on the high desert of the Golan, a Mediterranean landscape reminiscent (not too surprisingly) of parts of Southern California, Italy or Greece. Riklis says he fell in love with the place a few years ago and vowed to shoot a feature there. "I did a documentary for Israeli television there in 1998 and 1999," he remembers, "and I shot a wedding somewhat like this one on the border between Israel and Syria, a wedding that went wrong. I thought, 'Wow, this is a great setting, a beautiful place and a dramatic situation. I'll tell this story one day.'"

Winning the trust of the Druze villagers in the Golan was a difficult task, perhaps especially for an Israeli. "I spent a lot of time there getting to know the people, and I think ultimately they allowed themselves to open up to me," Riklis says. "These are people who live by a clearly defined set of rules; they respect tradition and authority. They live in the mountains, they keep to themselves, they are very cautious." Although only one actor in the film is actually Druze -- as a people, they have no performing arts tradition -- Riklis felt it was crucial for his Arab and Israeli cast members to feel comfortable among the villagers.

One of the most appealing things about "The Syrian Bride" is that in a period when much of international film feels minimalist and constricted, Riklis paints in big emotional colors with a broad brush. He was looking for something, he says, "like the approach of Italian filmmaking, which can move elegantly from huge tragedy to broad comedy." On one hand, he says he wants the film to feel "open-ended, mysterious and a little bit obscure." But he adds: "I respect clarity, and making a film that achieves a kind of resolution. I'm making a film that can be understood anywhere by anyone, OK? I'm not really interested in movies shown in cinematheques for 10 people."

Indeed, "The Syrian Bride" was a big hit in Israel and has already become one of that nation's most honored films. This is especially notable, since the only major Israeli Jewish character is the police officer, clearly the least sympathetic figure in the story (although even he, as Riklis puts it, "has his moment of grace"). "Once people came to the cinema they saw they were watching a film about themselves, in effect," Riklis says. "People realize quickly that this film is not about taking anyone's side. I don't take the Israeli side or the Syrian side or the Druze side; I'm not interested in that. This is meant to be a democratic portrait of the situation. All these people are people first and foremost, trapped in an escalating situation that is way beyond their control."

"The Syrian Bride" is now playing at Film Forum in New York, with a national release to follow in spring 2006.