Can Democrats criticize Bush's war while taking a united stand on what to do next? 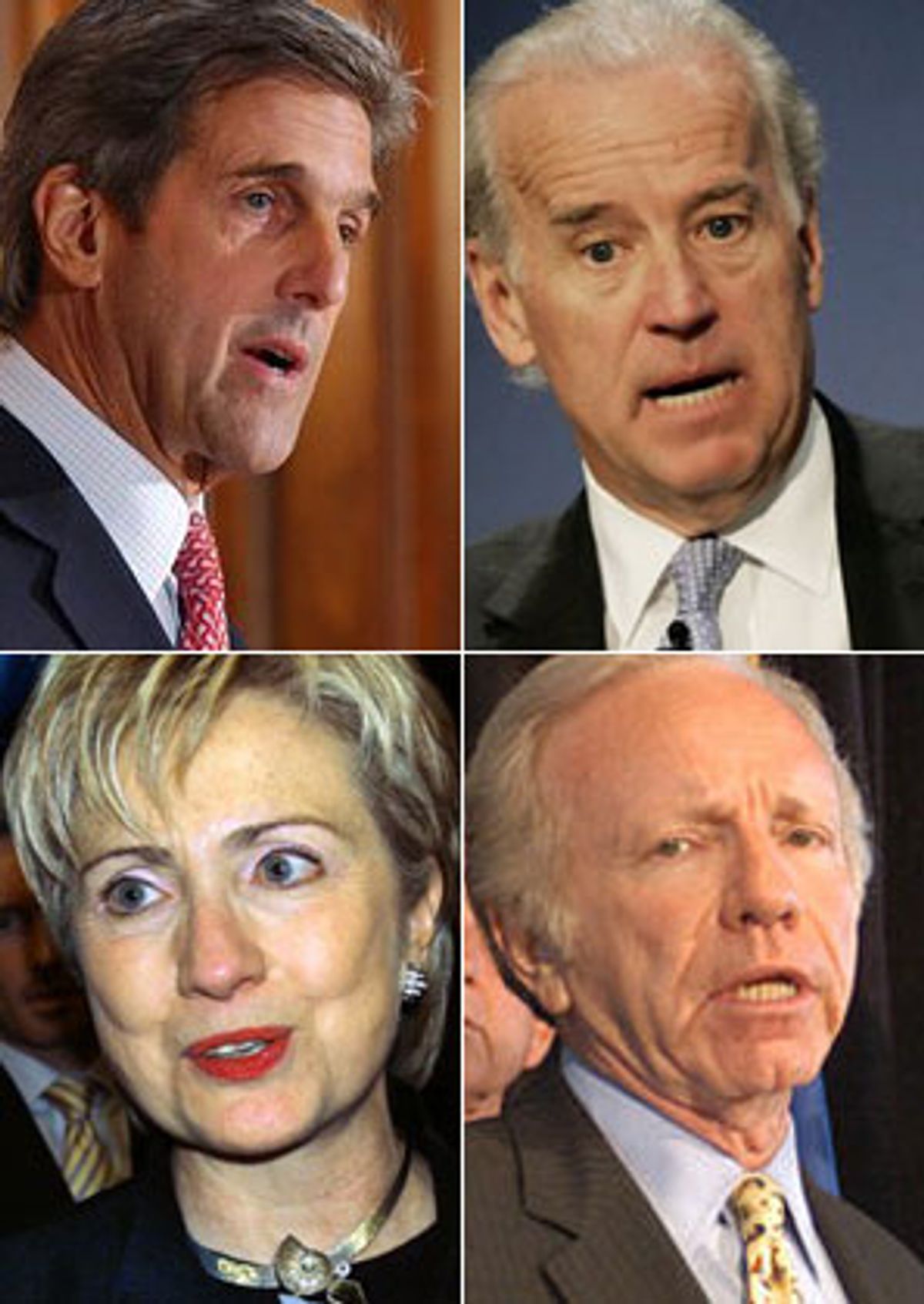 When Rep. John Murtha, D-Penn., stood up in mid-November and declared that the war in Iraq was "not going as advertised" and was "a flawed policy wrapped in illusion," he set off an explosive new round of debate -- one both forward- and backward-looking. Weeks later, as Democratic leaders strive to present a united front on how and when to withdraw from Iraq -- and signs show they are succeeding -- there are still cracks in the facade. Some worry that calling for an instant pullout will bury them in charges of being soft on national security, or be interpreted as criticism of U.S. troops themselves. All the doubts play into the hands of the White House, which can claim Democrats can't get their act together on how to deal with the unpopular war.

But the most obvious problem for Democratic leaders, especially those who want Bush's job, is their initial votes to authorize war. So far, they have managed to explain their 2002 decisions with varying degrees of success. Massachusetts Sen. John Kerry has said he would not cast the same vote today. Delaware Sen. Joe Biden has called his vote a "mistake." In a letter to constituents last month, New York Sen. Hillary Clinton said she would take "responsibility" for her vote, though she did not use the "m" word.

They are all quick to add, though, that while they voted for war, Bush screwed it up all by himself. They certainly would have thought twice if they had known the intelligence on weapons of mass destruction was bunk. But they also say they regret giving authority to a commander in chief who would proceed to spurn the international community, abandon weapons inspections, and then botch the war after the initial campaign.

"It was a mistake to assume the president would use the authority we gave him properly," Biden said in late November on NBC's "Meet the Press." "And the fact of the matter is we went too soon. We went without sufficient force. And we went without a plan." Biden called his vote for war "a mistake."

In October 2002, Biden told his Senate colleagues that voting yes did not necessarily give Bush the OK to invade Iraq solo. "So, for Lord's sake, anybody who decides to vote for this resolution, please do not rest it on this cockamamie notion of preemption," Biden said. "You will rue the day." Instead, Biden stated he was supporting Bush's desire to "demonstrate" that he has "support in order to go to war." That support would ratchet up pressure on the United Nations to pressure Hussein to disarm. Biden also said then Bush had personally assured him that he would wage war, "under the auspices of the U.N. or the coalition," if possible.

Today, Kerry also says that if he knew then the depths of the president's ineptitude, he would not have voted for the war. "Knowing now the full measure of the Bush administration's duplicity and incompetence, I doubt there are many members of Congress who would give them the authority they abused so badly. I know I would not," Kerry said at a speech at Georgetown University in October.

In 2002, Kerry said he would authorize war because Bush wouldn't go it alone. "I will vote yes because I believe it is the best way to hold Saddam Hussein accountable," Kerry said on the Senate floor. He added: "And the administration, I believe, is now committed to a recognition that war must be the last option to address this threat, not the first, and that we must act in concert with allies around the globe to make the world's case against Saddam Hussein."

In an October 2005 speech, Kerry said Bush blew it on those issues. Though the administration "could have learned from George Herbert Walker Bush and built a genuine global coalition," he said, "they chose not to. They were wrong." He added that the administration "could have given the inspectors time to discover whether Saddam Hussein actually had weapons of mass destruction."

The problem with Biden and Kerry's complaints now is that while the text of the October 2002 resolution to authorize war expressed "support" for diplomacy, it did indeed give Bush the authority to wage a war when and how he saw fit. In fact, that's exactly what West Virginia Democratic Sen. Robert Byrd tried to tell his colleagues. "This resolution is breathtaking in its scope," Byrd said on the Senate floor then. "It would give the president blanket authority to launch a unilateral preemptive attack on a sovereign nation that is perceived to be a threat to the United States." Byrd voted no.

When New York Democratic Sen. Hillary Clinton voted to authorize war in 2002, she said that she wanted the U.N. to insist on unfettered weapons inspections in Iraq. "I will take the president at his word that he will try hard to pass a U.N. resolution [for unfettered inspections] and will seek to avoid war, if at all possible," Clinton said in the Senate during the prewar debate. She added she would vote to authorize war "because bipartisan support for this resolution makes success in the United Nations more likely, and therefore, war less likely."

In a letter to constituents dated Nov. 29, 2005, Clinton said she would "take responsibility" for her vote. But she quickly added that Bush had assured her before the invasion that he would stick with weapons inspections. Then, Bush went out and screwed up the war. "I, along with a majority of Americans, expect the President and his Administration to take responsibility for the false assurances, faulty evidence and mismanagement of the war," she wrote.

Are Democratic leaders making a convincing argument for why they authorized a war from which they now want to withdraw? Some analysts don't think so. "'I shouldn't have trusted the President,' doesn't quite do it," Thomas E. Mann, a senior fellow at the Brookings Institution, wrote in an e-mail. "Nor does, 'We didn't have adequate intelligence.'" Like Bush, wrote Mann, Democrats who voted for the war are now hoping the United States can get out of Iraq and leave something less than a disaster. "But it is not clear that such a plan can be devised or implemented."

Perhaps the only leading Democrat who seems perfectly comfortable on the subject is Joe Lieberman. The veteran senator from Connecticut recently returned from Iraq and promptly penned a "stay the course" Op-Ed in the Wall Street Journal, in which he told his colleagues to stop whining.

"The progress in Iraq is visible and practical," Lieberman wrote. "I am disappointed by Democrats who are more focused on how President Bush took America into the war in Iraq almost three years ago, and Republicans who are more worried about whether the war will bring them down in next November's elections than they are concerned about how we continue the progress in Iraq in the months and years ahead."

Lieberman may feel a little alone in the Democratic Party just now. Time will tell if his message might benefit Democrats in the days to come -- and whether the party will be able to come up with a unified message going forward.