"Memoirs of a Geisha"

Pile into the rickshaw for a slooooooow ride: This very serious, very long, very pretty picture never really gets moving. 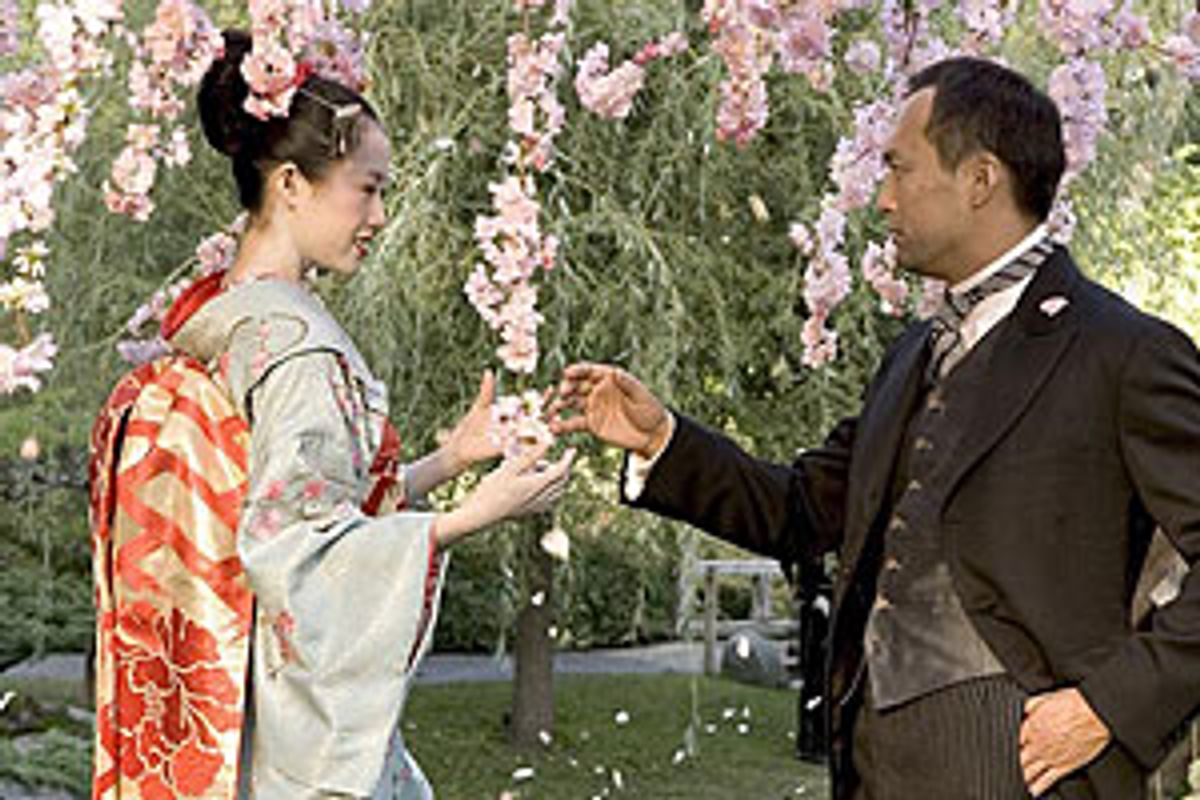 Ah, the Christmas movie season. What better time for Hollywood to serve up a big prestige picture designed to open our eyes to the quaint cultures of other lands? This year: All aboard the Orient Express for "Memoirs of a Geisha"! This is a very serious, very long, very pretty picture about the life of a geisha in pre-World War II Japan, starring three of the biggest actresses in the world -- they happen to be Chinese, but let's not get too hung up on the details.

"Memoirs of a Geisha" -- directed by Rob Marshall, adapted from the novel by Arthur Golden -- will teach you many things about the artistry and discipline of the geisha, for which you will be grateful and leave the theater speaking in language that sounds as if it's been taken from the subtitle, although English is the language of the movie. "A kimono like this, made of Tatsumura silk! It will take you a lifetime to earn!" says one character, and believe you me, there's no way she could be wrong.

"Memoirs of a Geisha" is a bit like "All About Eve," but with lots of historical detail and some very fancy establishing shots. Fasten yourself into your rickshaw: It's going to be a bumpy night. A young, impoverished Japanese girl is taken from her home and sent to work as a servant in a geisha house. There, she meets top geisha Hatsumomo (Gong Li), a duplicitous schemer who, perhaps sensing that the girl will grow up to become a threat to her status, takes an instant disliking to her, devising ways to get her in serious trouble with the woman known as Mother (Kaori Momoi), who runs the house by very strict rules and perpetually smokes a very long, very evil-looking pipe.

Hatsumomo is right to fear this young girl: Under the tutelage of her mentor, another top geisha, Mameha (Michelle Yeoh), the child will grow up to be the lovely and accomplished Sayuri (Ziyi Zhang), a respected geisha whose company is desired by the most powerful and successful men. Mameha has wisely counseled Sayuri not to seek love from her clients. Even so, Sayuri is haunted by a memory from her hardscrabble childhood: A prosperous businessman -- he's known only as the Chairman, and he's played by Ken Watanabe with as much elegance as any actor could muster in an unwritten role -- once stopped on the street to show her a kindness, and she has never forgotten it. She treasures the handkerchief he gave her, hoping that one day he'll return her love.

It's not the plot that's the problem with "Memoirs of a Geisha." The story (the script was adapted by Robin Swicord) has all the bone structure of a great '40s romantic melodrama. I wanted to like the swoony business with the handkerchief, and to relish the way Hatsumomo urges the young Sayuri to do bad stuff, like dribble ink onto Mameha's prize kimono. What's more, it seems incomprehensible that with actresses like Zhang, Yeoh and Gong, "Memoirs of a Geisha" could be anything close to bad.

But there's no life, no juice, in the picture. Instead of tempting you into submission, it merely drugs you. It's surprising that a filmmaker who gave us such a lively debut, "Chicago," could slap us with a picture as dull and worthy as this one. Then again, maybe it isn't: "Chicago" is the sort of movie that marks a director as a crowd-pleasing showman; "Memoirs of a Geisha" could make people think of him as an artist. And what director doesn't want to be seen as an artist?

But "Memoirs" desperately needs the showman's touch. The picture was shot, gloriously, by Dion Beebe, also the D.P. of "Chicago" and the gorgeous-looking "Charlotte Gray." It features lots of mountain vistas and delicate foliage. But enough already with the pretty pictures: Instead of giving us just the choice ones, Beebe loads up on them as if they were cheap candy -- after all, he's got a lot of space to fill. The picture's editing is generous with its use of extra, saggy beats: At one point a character tells young Sayuri, who's desperate to find her lost sister, that she can't possibly visit every house in the geisha district. "Do you know how many there are? Look!" she says. We know what's coming next, and still we wait two seconds, maybe three, before we get a languorous, loving skyward pan, eventually -- it takes a while -- revealing gray rooftops stretching as far as the eye can see. Then a few more beats pass, just in case we'd like to start counting.

The actresses are shot almost as lovingly as those rooftops are, and with just about as much passion. Gong has the thankless role of the bitchy villainess, and while she brings some crisp dignity to it, it's still a flat part that's far beneath her gifts. Zhang fares better: Her face is expressive enough to distract us from the awkwardness of some of her lines. Yeoh is the best, and the most relaxed, of the three: Her character is principled and wise, the kind of figure who could easily come off as stiff and dull. But Yeoh is alert and open every moment; when she's on-screen, the movie comes as close as it will to feeling supple and free. She also has the movie's most absurd line, in which she prepares Sayuri to auction off her virginity -- "Did mother ever tell you about the eel and the cave?" -- and somehow, she survives it.

I suppose anyone who already loves these three actresses should be glad they found roles in a big Hollywood movie in the first place. And yet these performances are frustrating: Even at their best, there's something ornamental about them, as if the actresses weren't particularly comfortable in the roles. Worse yet, the trailers I saw in the months before the picture opened didn't even mention the actresses' names, ostensibly because they're not big stars in America. Apparently, all the public has to know is that the movie stars "real" Asian actresses and thus must be suitably authentic -- why even bother with names?

But their names do mean something, certainly in that tiny corner of the world known as Asia (and certainly to the Asian film devotees in this country). "Memoirs of a Geisha" has been marketed as if the movie itself had invented these stars, pulling them out of thin air, when in reality Yeoh and Gong have been starring in Asian pictures for nearly 20 years. Zhang, at 25 the youngest of the three, has already done superb work in pictures like "Hero" and "House of Flying Daggers." Zhang and Gong gave astounding, and very different, performances for Wong Kar-wai this year, both of them in "2046" and Gong in "The Hand," Wong's episode in the omnibus film "Eros." What's more, mainstream American audiences are probably at least somewhat familiar with Yeoh and Zhang from "Crouching Tiger, Hidden Dragon." They'd also know Yeoh from the Bond film "Tomorrow Never Dies" and Zhang from "Rush Hour 2." (And Gong Li has a role in Michael Mann's upcoming "Miami Vice.")

Watching "Memoirs of a Geisha," I felt disheartened that, even though these women are the movie's stars -- and at home, they probably can't walk down the street without being hounded for an autograph -- they still have the aura of novelty about them. The movie is set up to be a window into another culture, and if you can get past the fact that Sayuri's big dance-performance sequence resembles an outtake from "Showgirls," you may actually pick up a thing or two about about early 20th century geisha culture.

But what we're really getting is a fat dose of Hollywood culture. If you find "Memoirs of a Geisha" wearying, as I did, you may find yourself accused of being irredeemably Western, too accustomed to noisy car chases and toilet humor to be able to appreciate a Zen garden of a movie like this one. (A recent picture now in distribution limbo, Taiwanese director Hou Hsiao-hsien's "Three Times," tells a very similar story at a similar pace, and yet every moment is emotionally vivid.) Slowness doesn't necessarily equal beauty or power or profundity, nor does it ensure an acceptable level of "Asianness." And in "Memoirs of a Geisha," it doesn't serve its stars, either. If a movie isn't wholly alive to actresses like these, it isn't alive.