Bring on the naked girls. This movie about a wartime London topless show is all facade -- and what a facade! 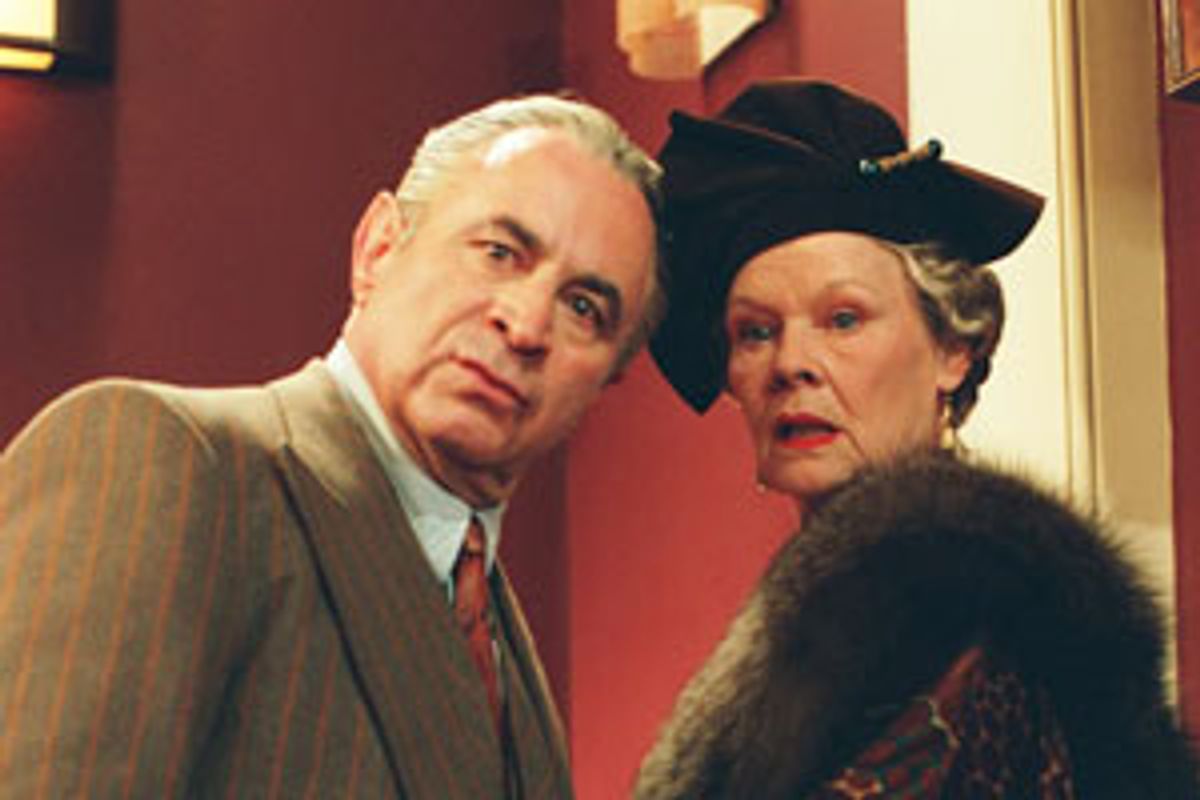 Stephen Frears' "Mrs. Henderson Presents" tells the story of the Windmill Theatre, a London establishment that made a name for itself in the '30s with its seminude revues: To avoid running afoul of the censors, the theater's topless showgirls had to remain completely still onstage, like living works of art. In their elaborately revealing costumes, they'd arrange themselves in elegant tableaux of mermaids, art-deco goddesses, or Indian princesses -- static and tasteful, maybe, but still enchantingly racy. The Windmill was also the only West End theater to remain open continuously throughtout the Blitz, providing entertainment for troops sorely in need of it. Its slogan, a defiant bit of truth in advertising, became "We Never Closed."

The story of the Windmill, as Frears and writer Martin Sherman tell it here, is one of artful draping and wartime valiance, in precisely that order. This is a shimmery beaded curtain of a movie, a slight, charming picture that's almost all facade. But what a facade!

The Windmill was the brainchild of Laura Henderson, here played by Judi Dench. She's a recent widow who's looking for some amusement, and also a place to sink her massive pots of money. Impulsively, she buys a rundown theater and, looking for someone to run it for her, fingers an experienced but currently unemployed theater manager, Vivian Van Damm (Bob Hoskins). Van Damm almost refuses at first: Mrs. Henderson nearly drives him away with a barrage of teasing but imperious insults, some of which betray the casual anti-Semitism so common in women of her class.

The two are so badly mismatched they can barely speak a civil word to one another (at one point Van Damm becomes so annoyed with Mrs. Henderson's meddling that he bans her from the theater). But they do manage to work out a moneymaking formula of running vaudeville-type shows all day long. The only problem is, their profits drop when other local theaters copy their format. The proper but eminently practical Mrs. Henderson comes up with a novel idea: "Let's have naked girls -- do you think?" she suggests, as if she were offering a guest a second teacake. "Paris is just filled with naked girls wearing bananas and driving the audience bananas in return."

Mrs. Henderson takes charge of working out the legal details with the censor, her old friend Lord Cromer (Christopher Guest, in a comic performance as understated as a trimly folded pocket square), who reluctantly agrees to allow the theater to try this new style of entertainment only if the unclothed girls remain completely still onstage. (He and Mrs. Henderson have a bracing go-round regarding the most proper and least-embarrassing name for the pudenda: She brazenly calls it "the pussy," while he demurely insists on referring to it as "the midlands.") And so Van Damm and Mrs. Henderson begin auditioning breasts and assessing nipples, eventually turning their theater into a hopping success.

The tone of "Mrs. Henderson Presents" isn't immediately clear at the beginning -- the picture feels a little too coy at first, and you may have your doubts about whether you'll be able to warm up to Dench. Her Mrs. Henderson is a woman of privilege, prone to dropping pronouncements like, "In India, there was always someone to look down on." And when she first meets Van Damm, her haughty, tossed-off appraisal of him marks her as the sort of woman who's never had to care what anyone else thinks of her -- or, more explicitly, who's never learned that other human beings actually have feelings: "You've got gumption -- and you're smoking a cigar. It's so manly -- so Jewish!"

The routine might have gotten tiresome, but Dench knows exactly how and when to soften it. This is a performance that may rise only a notch or two above shtick, but it's a deeply enjoyable shtick. And her scenes with Hoskins have a jazzy syncopation that's a pleasure to watch. Van Damm's prickliness with Mrs. Henderson evolves into grudging affection and respect, a tranformation that Hoskins effects with his usual streetwise elegance.

And by the end of the picture, you're left marveling at how Frears has kept the whole thing so crisp and so fun; wartime tragedy occasionally encroaches on the story, but those scenes are never milked for pathos. And the women are a pleasure to watch, as well as to look at, particularly Kelly Reilly as Maureen, the Windmill's star showgirl. Formerly a country girl, Maureen was discovered by Van Damm, when his car nearly hit the bike she was riding and she was dumped into a nearby pond. He'd been scouring the countryside for true English roses: In London, he'd seen too many aureolas that didn't quite fit the bill. ("Too Italian," he says of one pair. "We must have British nipples!") The captivatingly wholesome Maureen, who's also blessed with good sense and a lack of affectation, is exactly what he's been looking for, and she brings a bit of dairy-farm glamour to London. Seeing her on that stage, swathed in feathers and bits of chiffon, you have no doubt she's everything worth fighting for.