The rise and fall of T.O. 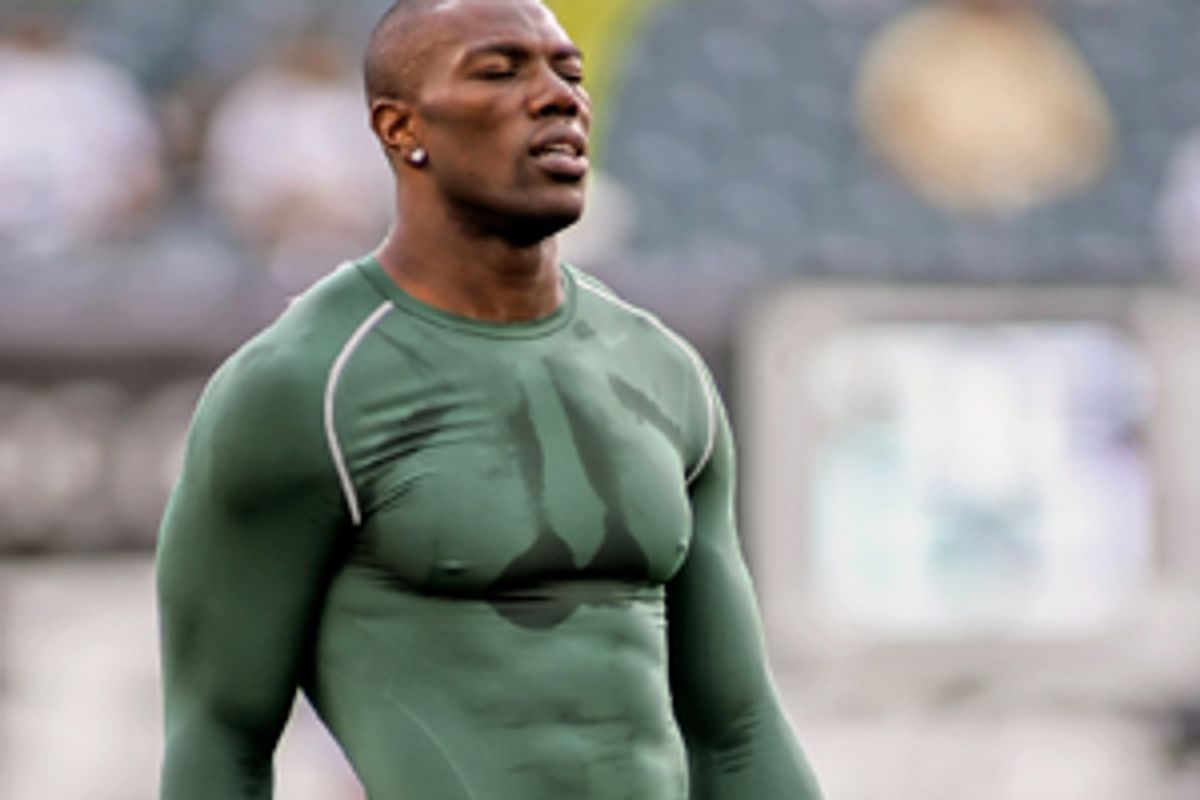 Philadelphia Eagles fans have been living in a jock soap opera -- "All My Children" surreally crossed with "Die! Die! My Darling!" Star wide receiver Terrell Owens arrived in a cloud of tainted glory from the San Francisco 49ers last year and took this city to delirious heights as the Eagles marched to the Super Bowl, their first appearance there in 24 years. Streaking downfield into the end zone in game after game, Owens (called "T.O.") danced, cavorted and mugged to the ecstatic delight of a Philadelphia crowd that had been starved for trash and flash in the drearily corporate era of nerdy Eagles owner Jeffrey Lurie.

Owens was virtually canonized early this year when he made a lightning-quick recovery from a broken lower leg to play against medical advice in the Super Bowl, where the Eagles lost 24-21 to the New England Patriots. Everything's been downhill since then. Genial, charismatic Eagles quarterback Donovan McNabb, who longed for an ace receiver and had lobbied for Owens' hiring, suddenly found himself on the latter's hit list. McNabb became mysteriously winded and nearly vomited in the fourth quarter of the Super Bowl. Owens, perhaps piqued by McNabb assuring reporters before the Super Bowl that the Eagles didn't need the injured receiver to win, began to twit the quarterback as an out-of-condition choker.

Whatever chemistry holds a team together began to evaporate. Owens complained that, in risking permanent injury by returning prematurely to the Super Bowl and giving his all, he had "outperformed" his contract and deserved a raise. Public sentiment was with Owens at the start: As I wrote in a celebratory Super Bowl cover story on him for Philadelphia magazine, Owens had by his own grit and tenacity elevated himself to the pantheon of mythical Philadelphia sports heroes like Sylvester Stallone's Rocky Balboa. Owens had zapped the city with pure electricity, a spiritual gift.

Worried about setting a precedent, Eagles management refused to budge on Owens' contract demands and gracelessly hunkered down in siege mentality. There were no generous gestures, no ceremonial signs of respect and appreciation. When McNabb was asked about Owens' appeal, he claimed neutrality as the quarterback -- and then made the foolish gaffe of supporting running back Brian Westbrook's contract claims.

Owens now took the low road and embarked on a series of stupidities that would lead to the near-total destruction of his reputation in Philadelphia. He boycotted the compulsory post-draft mini-camp, hired a new agent -- that colossal, braying jackass, Drew Rosenhaus -- and began sniping at the Eagles publicly. The equally aggrieved Westbrook, in contrast, kept his contract negotiations discreetly private.

At a time when the Eagles needed to regroup and regain confidence after their Super Bowl loss, Owens was a boorish voice of rancorous divisiveness. Questions flew about whether he'd turn up in August for preseason training camp at Lehigh University in the Pocono Mountains north of Philadelphia.

By chance, I was driving down from family business in upstate New York on Aug. 10 and stopped by at Lehigh to watch the Eagles work out. The air was buzzing with tension. I eavesdropped on two guards with walkie-talkies exchanging whispers about T.O. -- he's not talking to anyone; he marched into the lunch room and pulled out his one pal; he's left camp.

As I got back on the road to Philly (after complimenting kicker David Akers on his hard-hitting open-field tackles and buying a souvenir Eagles zippered long-neck beer bottle sleeve), I was astonished to hear radio bulletins with just-breaking news: Head coach Andy Reid had expelled Owens from training camp and suspended him for a week; the receiver had cleaned out his dorm room and was en route in his truck back to his home in Moorestown, N.J.

Now began a bizarre media extravaganza. News helicopters (reminiscent of O.J. Simpson's white Bronco chase) took to the air to capture Owens' retreat to his McMansion on a painfully barren scrub lawn in a generic cul-de-sac. Crowds gathered to gape at the Napoleonic exile on his suburban Elba. This proved too seductive to the attention-craving Owens, who hauled a weight bench out to his driveway, stripped to the waist to show off his phenomenally sculpted torso, and laughingly did abdominal crunches for the cameras, as the choppers whirred overhead.

Philadelphia sports radio is always in high gear -- I listen around the clock to WIP, with its flamboyant hosts and tough sports chicks -- but the Owens saga (or "freak show," as it was soon called) turned the airwaves into World War III. Should Owens stay or go? Callers for and against T.O. debated the Eagles crisis at high pitch. Emotionalism, ambiguity, melodrama: It was like a glossy Hollywood B-picture starring Lana Turner or Susan Hayward. T.O. had refused to talk to the quarterback or to his own offensive coodinator; he and Reid had told each other to "shut up" in the locker room. Macho pro football had turned into high-school sorority cattiness with snubs, backbiting and hurt feelings.

By grandstanding in what some termed a vulgar "minstrel show" in his driveway, Owens forfeited his dignity and prestige virtually overnight. It was agonizingly traumatic for Philadelphia sports fans -- the spectacle of a great champion hemorrhaging from self-inflicted wounds. A week later, when Owens rejoined the team at the Eagles' official practice facility in Philadelphia, his alienation from his fan base was already severe: An airplane hired by a radio station tauntingly flew over the players on the field with a trailing banner proclaiming, "T.O. MUST GO."

As the season started, the on-field timing between Owens and McNabb seemed crisp, though their interactions on the sideline (obsessively scrutinized by fans) were distant or nonexistent. The team seemed to be gradually refocusing on a return to the Super Bowl. But Owens could not stop himself from carping at the Eagles on TV, and after weeks of disruptions and distractions, he was suspended for four games on Nov. 5 and later permanently deactivated.

In his Nov. 18 grievance hearing before an NFL arbitrator (who would rule in the Eagles' favor), 14 hours of testimony from coaches and management filled in the blanks -- a sad chronicle of Owens' petty, childish provocations, from refusing to open his play book at team meetings to parking in handicapped spaces at the stadium. The climactic incidents were a fight in the locker room with an ex-teammate (reputedly over the implication that Owens was faking an injury) and Owens' refusal to apologize to McNabb after denigrating his quarterbacking abilities in a TV interview.

But what really infuriated Philadelphia fans was when, after an embarrassing 33-10 loss to the hated Dallas Cowboys in Texas Stadium on Oct. 9, Owens insolently donned a No. 88 Michael Irvin throwback Cowboys jersey for the flight home. Sports radio seethed not only at Owens but at our maddeningly phlegmatic coach and other players for passively permitting this insult without protest or comment. It became apparent that the team was splitting into pro- and anti-Owens camps.

Not helped by this uncertainty and turmoil, McNabb suffered one injury after another this season -- a bruised sternum, a pulled groin, and a nagging sports hernia requiring an operation (performed last week). McNabb's season is over -- and with it all hope that the McNabb-Owens partnership could have rivaled such supreme quarterback-wide receiver combos as the Pittsburgh Steelers' Terry Bradshaw and Lynn Swann or the 49ers' Joe Montana and Jerry Rice.

Owens has been shelved. Like Achilles sulking in his tent, the great warrior is languishing on the margins and relegated to throwing himself parties. (Owens' 32nd birthday festivities in Atlantic City on Monday night featured hired party girls in football jerseys; 19 Eagles turned up, but not McNabb.) Owens' strange self-destruction does indeed seem like something out of the Iliad. T.O. has Achilles' strength, beauty and physical perfection combined with his self-intoxicated hubris and rampant disregard for the collective mission.

Worst of all, however, is the effect on race relations here. Before the Owens epic, there was very little race talk in Philadelphia sports. The Philadelphia Eagles are a heavily black team that has had three black quarterbacks over the past 19 years. The team leader, after McNabb, is lethal free safety Brian Dawkins, a three-time All-Pro with a trademark style of burning intensity and soulful, soft-spoken intellectuality.

Two years ago, when Rush Limbaugh commented on TV about McNabb's status as a black quarterback, the resulting furor seemed to be among the national media and made little impact here. The passionate, often rabidly negative commentary on the Eagles by radio callers of every race has always been colorblind. Players were mercilessly evaluated only for their talents and execution on the field.

But Owens let the racial genie out of the bottle. Suddenly, Owens' dwindling supporters in the city were calling radio stations and denouncing McNabb as a "sellout," the cooperative "house Negro" kowtowing to "the man," the plantation master (Eagles and NFL management), while Owens is the proud, brave, uppity "field hand" whipped for his defiance and independence. Others dismissed McNabb as "Wonderbread," the coddled "golden boy," the "$100 million man" who "got his" and left his brothers behind.

A black caller recently said of McNabb's Campbell's soup commercials (which unsettlingly feature his bossy, dynamic mother), "Donovan gave up some of his blackness to be accepted by white corporate America." Last week, the head of the Philadelphia chapter of the NAACP published a harsh column in a local black newspaper berating McNabb for denigrating the scrambling tradition of mobile black quarterbacks by obstinately refusing to run instead of throw.

This is Terrell Owens' toxic legacy -- ugly talk that has poisoned the well and sparked racial discord in a generally tranquil city with a black mayor. Owens gave the Eagles indelible sports moments, but no highlight reel can compensate for the chaos and bitterness he brought.

The Eagles are currently devastated: With 12 key starters injured, they have their first losing season in six years and, as of their 26-23 overtime loss to the New York Giants on Sunday, are officially out of the playoffs. Their humiliating 42-0 defeat by the Seattle Seahawks at home in Philadelphia on "Monday Night Football" on Dec. 5 was their most lopsided loss in 33 years.

Goodbye, Terrell -- wherever you're headed. Thanks for the memories, but as a fierce funk song says, "Just let the doorknob hit you where the dog shoulda bit you!"