In a highly unusual tactic, Robert Luskin is using his own conversation with a reporter to try to exonerate Karl Rove. But the move could backfire. 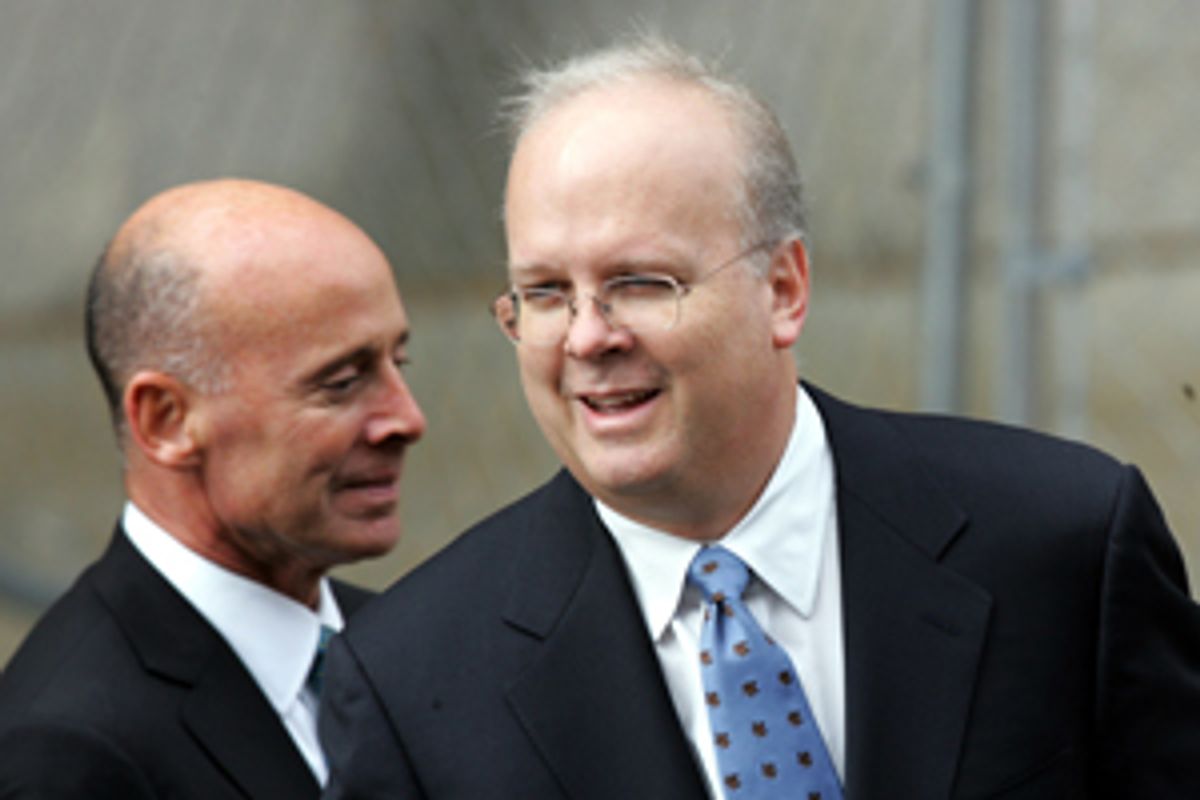 Without leaving the shadows, Washington attorney Robert Luskin is having his moment in the sun. His most famous client, presidential advisor Karl Rove, remains indictment-free six weeks after another White House aide, I. Lewis "Scooter" Libby, was charged with lying to investigators. Luskin has pulled this off even though Rove is widely believed to have also given false or incomplete information to investigators, first to the FBI and then to a federal grand jury.

One of the cards up Luskin's sleeve, it appears, is himself. Just days before Libby's indictment, Luskin told special prosecutor Patrick Fitzgerald about his own private conversation with an old friend, Time Magazine reporter Viveca Novak, according to press reports. Luskin apparently hoped that the conversation would lend credence to Rove's claim that he did not intentionally conceal anything from investigators. In the process, Luskin effectively turned himself in as his own client's alibi.

As a legal maneuver, Luskin's tactic is highly unusual, say legal experts. And it just might work, helping to build the case that Rove never intended to mislead the investigation into a White House leak of a CIA agent's classified identity. But experts say Luskin's gamble also carries a couple of possible downsides.

If Rove is indicted and the case goes to trial, the last-minute move may complicate Rove's ability to defend himself, and it may force Luskin off the case.

"The first thing I thought of when they said the attorney was involved is, there is an issue here," says Judith McMorrow, a law professor at Boston College who specializes in legal ethics. The issue arises from the dual role that Luskin is now playing. He is both an attorney representing Rove and a part of Rove's defense. This means Luskin could now be forced to take the stand at trial. "It makes the lawyer a kind of collaborating witness," says Stephen Saltzburg, a professor at George Washington University law school. "Very likely he could not serve as counsel for Rove at trial."

Luskin's involvement as a witness also could create a potentially more damaging complication for Rove. If Luskin has told Fitzgerald about any communications he had with Rove, experts say, the court would likely see this admission as a partial waiver of attorney-client privilege. "If you disclose anything that is privileged, then that is regarded as a waiver of the subject matter," said Michael Scheininger, an attorney at McKenna, Long and Aldridge. That could make some of the private conversations, and possibly e-mail, between Rove and Luskin fair game for prosecutors.

"Both lawyers and journalists are in odd positions potentially in this case," said Saltzburg, who added that he expects Luskin foresaw these complications before contacting Fitzgerald. "Before Karl Rove would have risked waiving privilege they would have gone over with him the upsides and downsides."

When contacted Thursday, Luskin declined to comment on any new risks his client may face or on his discussions with Fitzgerald. "It is completely speculative," he said, when asked whether he might step down from the case or whether Rove might waive attorney-client privilege.

Fitzgerald has met in recent weeks with a second grand jury to discuss the CIA leak case. In October, the prosecutor said his investigation was nearing completion. "Nobody wants this over as much as I do," he said. In the last two weeks, both Luskin and Novak have been deposed by Fitzgerald, according to several press reports.

By most accounts, the major outstanding issue facing Fitzgerald is whether to charge Rove with perjury, giving false statements or obstruction of justice. A clear timeline of Rove's testimony has been established by a number of major news organizations, including the New York Times, the Washington Post and Time magazine, whose reporters have spoken with lawyers involved in the case. It begins months after the 2003 leak, when Rove met with FBI agents but failed to disclose that he had spoken with Time reporter Matthew Cooper about Valerie Plame, a CIA employee whose husband had become a critic of the White House. Rove again failed to disclose the discussion with Cooper in February 2004 before Fitzgerald's grand jury. Eight months later, in October 2004, Rove returned to the grand jury to change his testimony and admit to a discussion with Cooper.

In the interim, Luskin met with Novak, another reporter for Time with whom he was friendly. At the meeting, according to Novak's memory, Luskin claimed that "Karl doesn't have a Cooper problem." Novak shot back, "That's not what I hear around Time," apparently tipping off the lawyer to the fact that his client's story could be challenged. Luskin later told Novak that her comment led him to ask for an intensive search for evidence of a phone call between Rove and Cooper in White House records. In that search, according to this account, an e-mail written by Rove in 2003 was discovered. According to the Associated Press, it described Rove's phone conversation with Cooper about the CIA trip to Niger conducted by Plame's husband. Cooper later testified about his conversation with Rove before the grand jury.

To obtain a conviction against Rove, Fitzgerald would have to prove to a jury that Rove knowingly made a false declaration to investigators, for example, in not disclosing his conversation with Cooper. "It cannot be the result of inadvertence, honest mistake, carelessness, misunderstanding, mistaken conclusions, or unjustified inferences testified to negligently, or even recklessly," according to the Department of Justice's guidelines for perjury prosecutions. In most perjury cases prosecutors are forced to prove that the defendant knew he was lying by using circumstantial evidence.

In his indictment of Libby, Fitzgerald made his case by showing that Libby had numerous discussions about Plame before the time he claimed to have learned her identity. These included conversations with a senior CIA officer, an undersecretary of state, the White House press secretary and Vice President Dick Cheney. Libby, meanwhile, claimed under oath that he had first learned about Plame's identity at a later date from reporters, including NBC's Tim Russert. Russert, meanwhile, denies that he mentioned Plame to Libby.

Fitzgerald's ability to indict Rove on a perjury count for his Cooper testimony depends largely on how many similar circumstantial details the prosecutor has compiled. At this point, only the prosecutor and his team know whether that evidence is sufficient to bring an indictment. The rest of the country -- not to mention Rove and Luskin -- will have to wait to find out.