After reporting on America's spying operations for 25 years, James Bamford is speaking out against Bush's FISA runaround. He says the wiretapping is illegal. 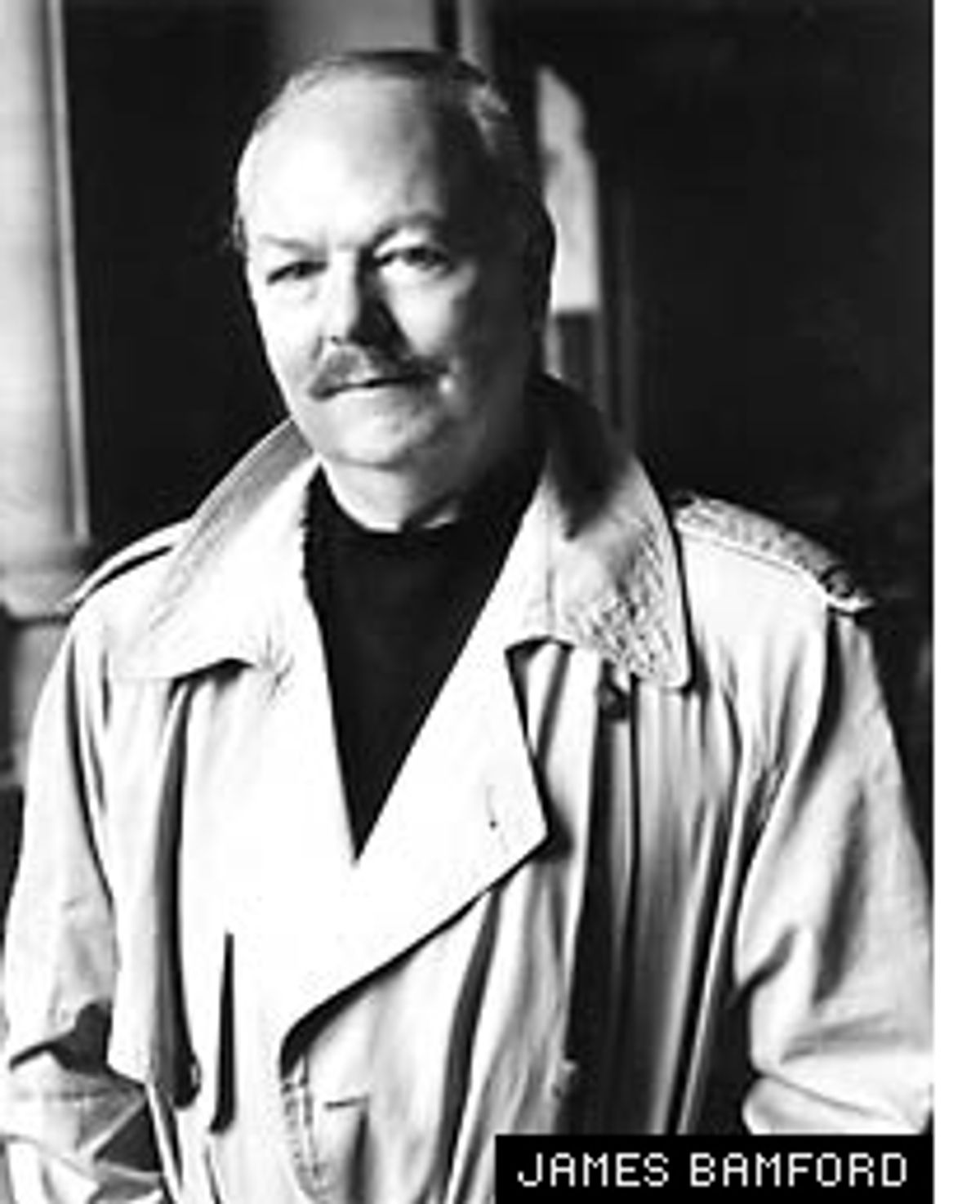 Not many journalists get their calls returned from the National Security Agency, the world's largest and most secret spy shop. Even fewer get private campus tours of Crypto City, the NSA's sprawling campus in Maryland where the computer systems are measured not by the megabyte, but by the acre. And almost no one outside the military-intelligence complex gets invited to the home of former NSA head Gen. Michael V. Hayden to have a family dinner.

But then James Bamford is not just any reporter when it comes to the NSA. He is the journalist who introduced the agency to the world with his explosive 1982 NSA history, "The Puzzle Palace." With obscure but public information, he bargained his way into the secret core of the U.S. intelligence establishment and revealed the scope of its reach, from its listening posts in the Turkish highlands to its omniscient relay satellites.

By 2001, when he published the second book on the agency, "Body of Secrets," the NSA brass appeared to have accepted him as a sort of unofficial ambassador to the general public. "The irony is that they tried putting me in jail after 'Puzzle Palace,' and they had a book-signing for me after 'Body of Secrets' came out," says the author, a balding, soft-spoken 59-year-old who wears his mustache neatly trimmed.

That comity faces new strain now that President Bush has admitted to ordering warrantless NSA wiretaps of American citizens, an admission that blindsided Bamford just as it shocked many in Congress. While politicians bicker over legal shades of gray, Bamford believes the president clearly broke the law, and he has called for a special prosecutor to investigate. "What you have here is the administration going around the only protection the public has from the NSA, and doing it on their own," Bamford told CNN during a marathon of interviews for MSNBC, NPR, C-SPAN, CBS News and NBC News. "That's how Richard Nixon got in trouble, and one of the reasons he left office."

Bamford's outrage stems, in part, from having been misled by agency officials. For years, he says, his contacts at the NSA repeatedly assured him that the agency was strictly following the letter of the law, even after Sept. 11. At the same time, President Bush assured the American people that "nothing has changed." "When we're talking about chasing down terrorists," Bush said in one speech, "we're talking about getting a court order before we do so." Hayden, who became the deputy director of national intelligence, also reassured Congress, calling NSA "the most aggressive agency in the intelligence community when it comes to protecting U.S. privacy."

"I interviewed a lot of people at NSA, including the director a number of times. The impression I always got was they were keeping as far from the edge as they could in terms of what the law is," Bamford says. It was a message he believed and put in his books. "I went out of my way to defend NSA," he says. "I said they were not going back to the bad old days."

Those bad old days, when Nixon spied on his enemies and J. Edgar Hoover ordered illegal break-ins, drew Bamford's attention to the agency in the first place. During the 1960s and '70s, the NSA launched vast spying operations on American citizens over domestic concerns. One program, called Minaret, monitored the communications of Vietnam War protesters like Joan Baez and Jane Fonda. Another program, called Shamrock, monitored American cables sent overseas. After the Watergate scandal, Congress passed the FISA Act and ordered other reforms to end such abuses. "Back then there wasn't a law. The NSA saw itself as alegal -- it was under the law," says Bamford. "Now there is certainly a law. The FISA statute is as absolute as you can get."

The son of an insurance executive from Natick, Mass., Bamford first worked with intelligence during the Vietnam War, as a Navy analyst stationed in Hawaii. After leaving the military, he went to college and law school on the G.I. Bill, before returning to Washington, D.C., where he heard rumors of a secret investigation of the NSA by the Justice Department. On a hunch, he filed a request under the Freedom of Information Act regarding the Justice Department's investigation, and about a year later he got a windfall of documents, including a summary of the NSA investigation and a report on the Central Intelligence Agency's electronic surveillance abilities. He decided to write a book. "I hadn't written a thing in my life except legal briefs in law school," Bamford says.

When the NSA found out, the agency's brass demanded that he return the documents, but he refused, going so far as to sneak away from a meeting with NSA officials and his lawyer. He found more documents at the George C. Marshall research library in Lexington, Va. -- documents the agency later stripped from the shelves. Meanwhile, the NSA opened a file on him, under the code name Esquire, a fact he discovered through another FOIA request. He negotiated for a tour of the agency's secret campus by promising not to use the most sensitive documents he had acquired.

His first book, when it finally came out, was a bombshell, exposing in a single narrative an agency that the government had long tried to conceal. "In terms of NSA's organizations and activities, that really was a groundbreaking book," says Jeffrey Richelson, a senior fellow at the National Security Archive, a nonprofit research institution. "That has made, certainly, things easier for other people."

At the time, the NSA was little more than an obscure footnote in history books and a blip in congressional investigations. A few months after the book came out, Bamford remembers meeting Bill Bradley, then a U.S. senator from New Jersey, on a car ride to a television studio. When Bamford mentioned the NSA, Bradley looked confused. "He said, "What's that?'" Bamford remembers. Once the camera's started rolling, Bamford joked on camera that the NSA was so secretive, even Bradley didn't know about it. "It really pissed him off. He took a separate car back to the hotel," Bamford says.

Over the coming decades, he became a magazine freelancer and later a top investigative producer for ABC's "World News Tonight." He broke news of the investigation into Cold War spy Felix Bloch, a State Department employee, and wrote a New York Times Magazine cover story about his friendship with Robert Hanssen, the FBI agent who fed secrets to the Soviet KGB. His 2001 book, "Body of Secrets," was less well received than the first by intelligence experts, in part because of the high expectations Bamford had established.

"I'm sorry that he hasn't made greater headway," says Bill Arkin, a national security writer, who blogs for the Washington Post, noting that intelligence reporting is extraordinary difficult. The New Yorker's Seymour Hersh, another of the small cabal of reporters who report on top-secret "black programs," says he too was a fan of "Puzzle Palace," but disagreed with some of the theories in the later book. But "would I hire him if I owned a newspaper?" Hersh quips. "Sure."

Over 25 years, Bamford has tracked the dramatic evolution of NSA's technological abilities. He says that such advances both increase the civil liberties danger and the likely pressures to skirt the FISA process. When the FISA warrants were first established, computers were still in their infancy and much of communication was analog. "I could very easily see that they would say that we have a new advance in data mining, and we need to speed up the process, the FISA court is too slow," Bamford says. Still, he won't accept that as an excuse. "There is a law there," he says. "If you just read the law, it's very clear."

The law also has a purpose. Twenty-three years after publishing "Puzzle Palace," Bamford still likes to quote Sen. Frank Church of Idaho, who warned in 1975 of the vast powers of NSA's signal intelligence operation. "That capability at any time could be turned around on the American people and no American would have any privacy left, such [is] the capability to monitor everything: telephone conversation, telegrams, it doesn't matter," Church declared then. "There would be no place to hide."