The year in politics

Bush began 2005 celebrating his electoral victory and proclaiming a "turning point" in Iraq. But in every crisis he faced this year -- from Terri Schiavo to Hurricane Katrina to Iraq -- the tide turned against him 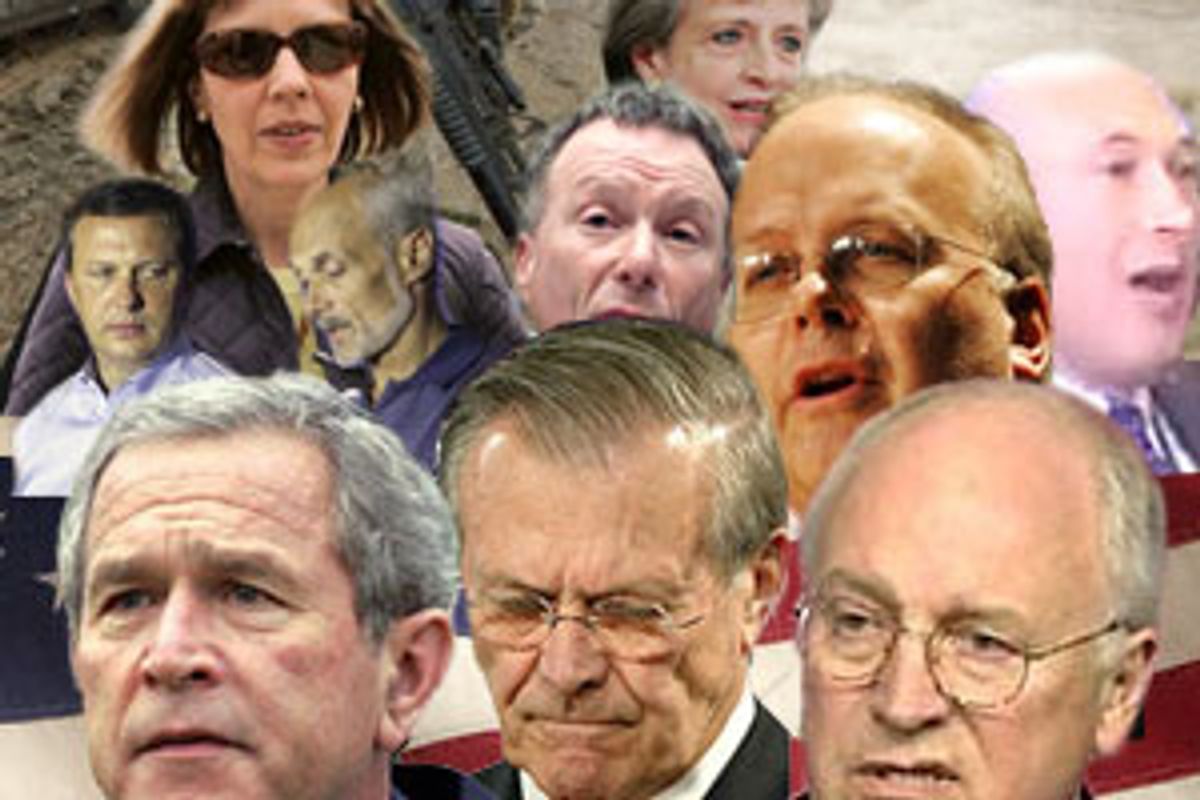 In his second inaugural address, George W. Bush four times summoned the image of fire -- "a day of fire," "we have lit a fire," "fire in the minds of men," and "untamed fire." Over the course of the first year of his second term, all four of the ancient Greek elements have wreaked havoc: the fire of war and "fire in the minds of men" of culture war, the air and water of Hurricane Katrina, whirlwinds raging across the earth from Iraq to Florida, from Louisiana to Washington. Through obsession or obliviousness, rigidity or laziness, Bush got himself singed, tossed about, engulfed, and nearly buried.

He began the year proclaiming "a turning point" in Iraq. In every crisis he faced, he assumed that everything would turn his way as it always had in the past. He ended the year declaring "victory" within reach.

The first shift in his political fortunes came with his unprecedented intervention in the case of Terri Schiavo, a woman who had lain in a persistent vegetative state for 15 years, and whose husbands effort to remove her feeding tube was upheld after 14 appeals in Florida courts, five federal law suits, and four refusals to accept the case by the U.S. Supreme Court.

Bush had won the presidency in 2004 with an extraordinary outpouring of support from the religious right. So he rushed from his Texas ranch back to the White House in March to sign the bill transferring the case from state to federal courts. Throughout the month, the Republicans strutted and the Democrats cowered. Then, on March 21, the spell that had carried over from the election campaign was suddenly broken in a single stroke. The deus ex machina that descended onto this fervent scene was an awakening public. An ABC News poll found that 63 to 28 percent backed the removal of Schiavos feeding tube and 67 to 19 percent believed that politicians urging that she be kept alive were demagogic and unprincipled.

By now, Bushs plan to privatize Social Security was for all intents and purposes moribund. He languished over his long summer vacation besieged by a Gold Star mother, Cindy Sheehan, whose son had died in Iraq. She camped out beside the road leading to the presidents ranch, asking him to explain the "noble cause" for which her son had given his life. Bush refused to grant her an audience, his motorcade racing past her to a lunch with big party contributors.

After Hurricane Katrina hit New Orleans on August 29, Bushs aides held a fraught debate about which one of them would have to tell the president he should cut short his vacation. Four days after the hurricane landed, Bush left his ranch and, on Air Force One, watched a custom DVD of television news coverage assembled by his staff. He had not bothered to see any of it on his own.

He praised his feckless chief of the Federal Emergency Management Agency, Michael Brown -- "Brownie, youre doing a heck of a job" -- and then nominated his former personal attorney and White House Legal Counsel Harriet Miers for the Supreme Court. Though friends offered testimony of her evangelical religiosity, conservatives did not trust her because she had once made gestures toward womens and civil rights, and Bush pushed her to withdraw.

Bush hoped to erase the years infamies with the election in Iraq on December 15, his ultimate turning point. He delivered five major speeches crafted by his new adviser on the National Security Council, Peter Feaver, a Duke University political scientist and co-author of "Choosing Your Battles," based on his public opinion research showing that "the public is defeat phobic, not casualty phobic." In one speech, Bush mentioned "victory" 15 times, against a background embossed with the slogan "Plan for Victory," and the White House issued a document entitled "National Strategy for Victory in Iraq."

On December 14, the president invited bipartisan groups of senators and representatives to White House briefings on the progress that would follow the election. Among those assembled in the Roosevelt Room were the president, Vice President Dick Cheney, Secretary of State Condoleezza Rice, Secretary of Defense Donald Rumsfeld, National Security Adviser Stephen Hadley -- and Peter Feaver, the polling expert. At the meeting with senators after the presentation, Bush called first on Senator John McCain, the Republican maverick, who gave an enthusiastic statement of support. A few more spoke. "Great, gotta go," said Bush. Afterwards, Feaver buttonholed senators to survey their opinions on the new approach.

Since the election of the Shiite slate that will hold power for four years, dedicated to an Islamic state allied with Iran, the president and his advisers have fallen eerily silent. As his annus horribilis draws to a close, Bush appears to have expended the turning points. Welcome to victory.