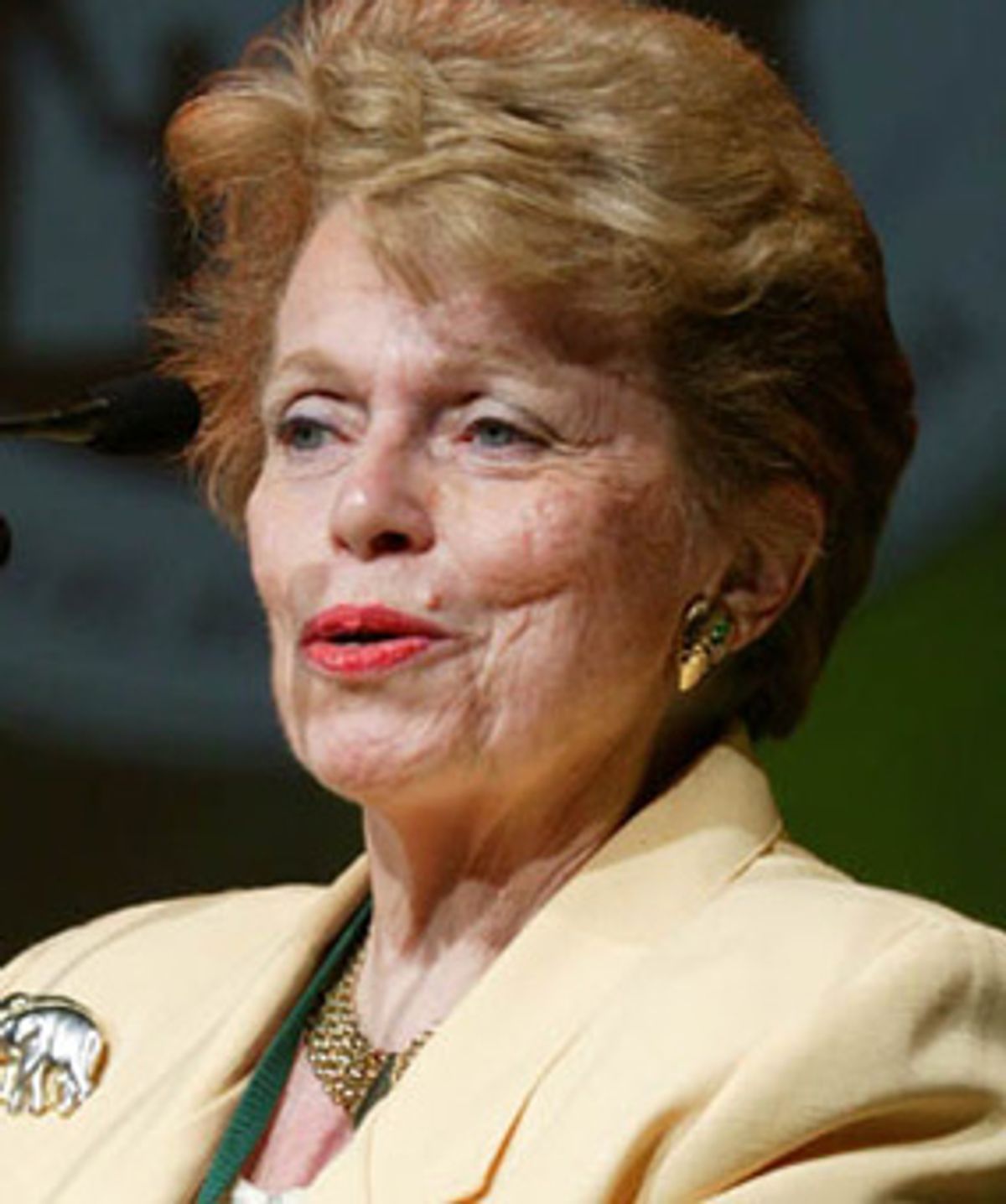 One of the Bush administration's favorite ways of rewarding its Christian right base is to seed the foreign policy bureaucracy with its allies. Because appointments to international delegations or deputy-level State Department posts get little mainstream attention, there wasn't much uproar when Bush made Christian radio host Janet Parshall (host of the hagiographic documentary "George W. Bush: Faith in the White House") a U.S. delegate to the 2005 United Nations conference on women. Only a whimper was heard when Bush tapped Paul Bonicelli, former dean of academic affairs at the fundamentalist Patrick Henry College, to be deputy assistant administrator at the United States Agency for International Development, putting him in charge of many of America's programs for promoting democracy in the Middle East.

But Bush couldn't slip his nomination for assistant secretary of state for population, refugees and migration under the radar. It's too important a position. With a $700 million annual budget, the department formulates America's response to refugee crises all over the world. So in October 2005, when Bush picked Ellen Sauerbrey, right-wing social conservative with little background in international affairs, to replace Arthur ("Gene") Dewey, a career foreign policy official, newspapers all over the country -- including the New York Times, the Washington Post, the San Antonio Express-News, the Miami Herald and the Charlton Gazette -- came out against her. During her October Senate hearings, Sen. Barack Obama, D-Ill., said, "It doesn't appear that you have very specific experience." Given Sauerbrey's weak résumé for the position, Sen. Barbara Boxer, D-Calif., convinced the Senate Foreign Relations Committee to put off a vote on her nomination until after the winter break. At the time, there seemed a slim possibility that the appointment would be defeated.

Rather than fight it out on Capitol Hill, Bush chose to circumvent the confirmation process. Yesterday, with Congress out of session, the president made more than a dozen recess appointments, granting positions to several controversial nominees. Julie L. Myers was made head of the Immigration and Customs Enforcement bureau at the Department of Homeland Security, despite criticism by Democrats and Republicans that she lacks experience. Tracy A. Henke became executive director of the Office of State and Local Government Coordination and Preparedness; as the Washington Post reported, "She had been accused in her politically appointed post at the Justice Department of demanding that information about racial disparities in police treatment of blacks in traffic cases be deleted from a news release." Sauerbrey was installed at the State Department.

She is already being compared to Michael Brown, the hapless former head of FEMA who famously worried about his on-camera wardrobe while New Orleans drowned. "If she is confirmed by the Senate, think of her as the Michael D. Brown of the refugee world," opined the Washington Post. Her lack of qualifications are so glaring that two of the last three people to hold the position -- Democrat Phyllis E. Oakley and Republican Julia Taft, both of whom served under Clinton -- signed a letter to the Senate Foreign Relations Committee opposing her confirmation.

"Her job description is to help coordinate humanitarian assistance across the globe, but it's clear that her first concern will always be to appease America's extreme right," Rep. Carolyn Maloney, D-N.Y., tells Salon in an e-mail. "There's a reason the president had to sneak this appointment past the Senate. I am sure when her appointment ends in a year, the president will proclaim that she did a 'heckuva job,' just like he told Michael Brown, but I fear that the world community will be telling a different story."

The comparison to Brown may be misleading, though, as Sauerbrey will have to deal with significantly more complex crises involving wars and disasters all over the world. Oakley, who held the position from 1993 to 1997, describes some of her responsibilities. "We had, of course, Rwanda and continuing problems in the Balkans, plus Haiti, plus Cuban refugees," she says. "It really does depend upon the world situation."

Oakley speculates on some of the challenges Sauerbrey might face. "I don't have a crystal ball but there are things like the tsunami, and natural disasters are always there. Watching the news today in Iraq, with problems in the Middle East, the illness of Ariel Sharon, instability in Lebanon, in Syria, one can just imagine that there could be big refugee outflows again. In Africa as well. You just have to expect that there's going to be serious humanitarian problems that the U.S. is going to have to deal with."

Previous assistant secretaries, Oakley stresses, have had decades of experience. "Gene Dewey, Julia Taft and I have all had different experiences but we had seen how U.N. organizations -- the mix of NGOs and governments  work," Oakley says. "I've been a foreign service officer dealing with Afghanistan, and served for a year as the principal deputy assistant secretary under Warren Zimmerman, the former ambassador to Yugoslavia. We knew, all three of us, how to get things done, the people to call at the Pentagon, what you needed to do at the National Security Council. You don't have time to consult widely. You've got to know the background, what's possible and how to get things done quickly." Sauerbrey, Oakley says, "doesn't have any of that."

What she does have are friends in the GOP. A darling of the religious right, Sauerbrey lost two races for the Maryland governorship and went on to become a TV talk show host and Maryland chairman of Bush's 2000 presidential campaign. She had no international experience until Bush appointed her U.S. ambassador to the U.N. Commission on the Status of Women. There, she was notorious for her active opposition to programs that expand women's access to contraception. She infuriated representatives of other countries by working to scuttle international agreements that codify women's right to reproductive healthcare. In March, she was loudly booed by delegates at a U.N. women's conference in New York -- a rare occurrence -- for her comments endorsing abstinence education as the best way to fight HIV.

In the past, Sauerbrey has made no secret of her opposition to reproductive freedom. She began a November 2003 address to the right-wing group United Families International by saying, "I always feel when I'm being introduced as a representative of the United Nations that I have to say I'm a conservative; I'm not a feminist." She continued, "Sean Hannity, this morning, talked about visions and the differences in visions. My perception is that this prevailing vision at the U.N. is one that is based on rights, but rights without responsibility. Family, whatever you want it to be. Sexual freedom, anything goes. Practically every resolution that goes before the U.N. ... somebody tries to figure out a way to put in 'reproductive services.'"

As she spoke, it became clear that her objection to "reproductive services" encompasses far more than just opposition to abortion. "So, what is our vision? It is certainly recognition that government policies have to be supported with the family," she said. She added that "we have to look at ourselves and recognize that government tax policies, government welfare policies ... no-fault divorce, [and] sex education have not been healthy to the promotion of the family."

Sauerbrey's opposition to sex education and safe sex initiatives will likely have profound effects on America's refugee policies. "The first issue is whether she is fully supportive of family planning efforts for refugee women, including things like emergency contraception, which has been unbelievably controversial in this administration," says Jodi Jacobson, executive director of the Center for Health and Gender Equity, an NGO focused on international reproductive rights. "In refugee settings, 80 percent of refugees are women and children. There are extremely high rates of sexual violence and coercion in refugee settings. You have a really, really high need for effective reproductive and sexual health programs that would include access to emergency contraception and HIV prophylactics and that kind of thing."

With Sauerbrey, Jacobson says, "You have a person in there who A) doesn't have any experience dealing with refugee movements, refugee resettlement, refugee crises, and B) has an ideological agenda against the single most important health intervention for refugee women."