The end of the Sharon era

Once despised by a generation of Israelis, Ariel Sharon became a venerated father figure. His passing from the political scene leaves the future of the Middle East in even greater doubt. 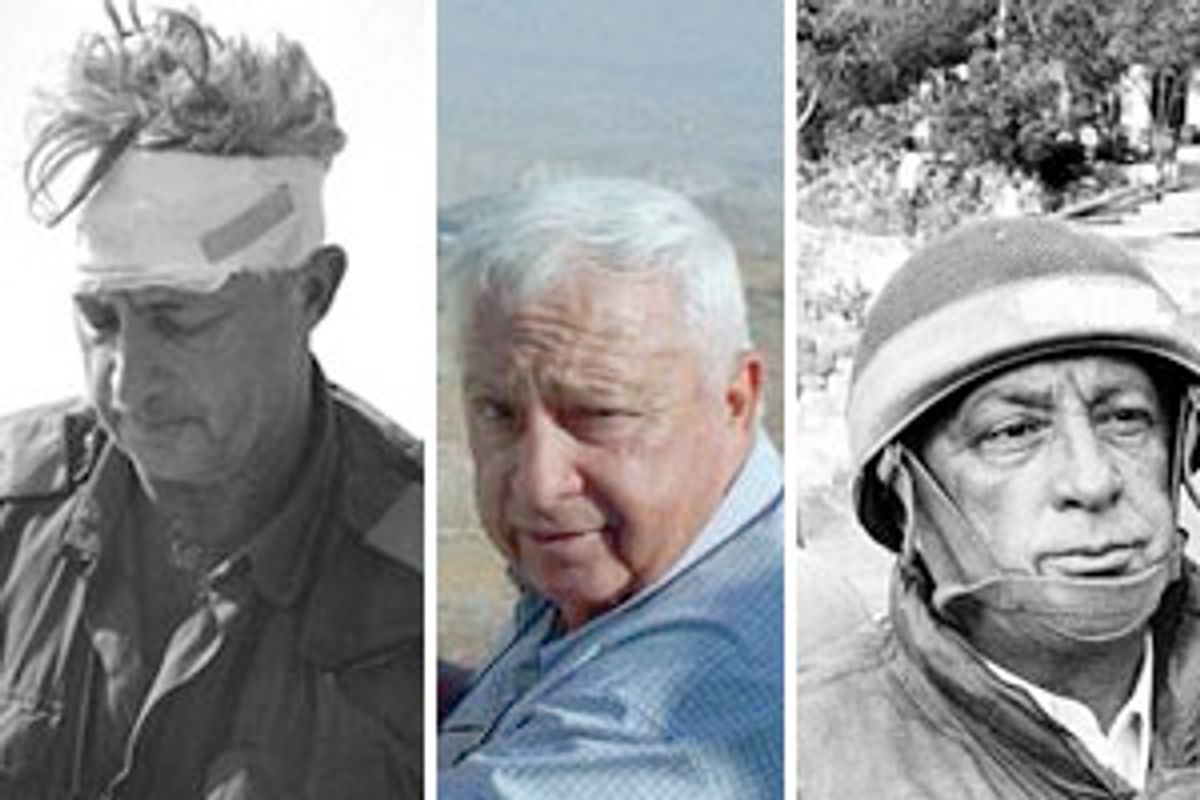 Ariel Sharon's critical illness marks the end of an era in Israel's leadership, and the beginning of a new chapter in the Jewish state's history. Throughout a unique military and political career, spanning over six decades, Sharon has been one of the most influential figures on Israel's national security, physical landscape and political map. Alternately viewed as a hero and a villain in his many public capacities, he exits Israel's political stage as an admired father figure, the most popular prime minister Israelis have had in a generation.

Concluding his fifth year as prime minister and approaching the age of 78, Sharon was on his way to a third electoral landslide in Israel's coming March 28 parliamentary election. The adoring public supported his efforts to maintain business as usual, after his sudden hospitalization for a stroke on Dec. 18, and prayed for his survival.

On Thursday, he was scheduled to undergo heart catheterization in order to prevent another stroke. But he had collapsed the night before from a brain hemorrhage, and was taken half-conscious to a Jerusalem hospital. Minutes after his arrival at the E.R., his powers were stripped away and given to his deputy, Ehud Olmert. True to form, the Sharon period ended in drama, this time in a personal life-and-death battle.

In whatever he did, be it in uniform or a business suit, Sharon has always provoked controversy. My generation of Israelis, coming of age around the time of his ill-fated 1982 invasion of Lebanon, grew to regard him as a reckless warmonger, the ultimate hard-liner who never voted for any of Israel's peace deals with its Arab neighbors. "If Sharon ever takes power, we'll leave the country," was a common saying among many Israelis. Shortly after the collapse of Israeli-Palestinian peace talks at Camp David, his September 2000 visit as opposition leader to the Temple Mount (Haram al-Sharif to Muslims) in Jerusalem, the most contested piece of real estate on the planet, sparked, or was used as pretext for, the Palestinian intifada. Few Israelis believed then that five months later, "Arik" would take office following a sweeping electoral victory. But by then he was already seen as a national savior against the growing Palestinian violence. His past sins were all but forgiven.

The job changed him. At first he wanted to crush the Palestinians by force, as in the past. When this failed, and suicide bombings went on, he agreed to build a physical barrier in the West Bank, an idea he previously rejected. Sharon -- the master of the terrain -- knew very well that the barrier route would mark the future border, and would eventually lead Israel to leave most of the West Bank territory it captured in 1967, including the many settlements built there by none other than Sharon himself. His old self.

Then, in late 2003, came the next and more profound development, when Sharon decided to evacuate the Jewish settlements from Gaza and leave that territory forever. It took him two years to direct the implementation of his "disengagement plan" through endless political hurdles and fears of civil war. But he prevailed, and the settlers were removed within six days last August, almost without a scratch. Sharon has shown exemplary leadership, winning unprecedented admiration for his "courage" from foreign leaders -- even including Egyptian president Hosni Mubarak -- who had shunned him before.

The Gaza withdrawal was followed by Sharon's latest, and as it happened, final maneuver: splitting the ruling Likud party, which he had initiated back in 1973, and forming his own centrist party, Kadima ("forward"). This bold move responded to the will of most Israelis to do away with the burden of occupying millions of unwilling, hostile Palestinians, and consolidate the country's shrinking Jewish majority over a smaller territory. Kadima immediately gained a lead in the polls and attracted a group of politicians from both major parties, Likud and Labor. Although Sharon kept his post-election plans ambiguous, the conventional wisdom was that he planned a follow-up withdrawal in part of the West Bank -- most probably, like the Gaza precedent, done unilaterally.

Unilateralism fit Sharon perfectly. He mistrusted "the Arabs" and preferred to dictate, rather than negotiate, the terms of the Gaza withdrawal. As a result, the Israeli disengagement hastened the disintegration of the Palestinian Authority (P.A.), rather than strengthening it, despite the transfer of additional territory and unprecedented control over its border with Egypt. The P.A. leader, Mahmoud Abbas, lacks the charisma and authority of his late longtime predecessor, Yasser Arafat. Though supported by Washington, Abbas failed to take control of the P.A. security forces and bring back law and order to Gaza. Instead, armed gangs and clans have become the powers that be in the overpopulated, impoverished area. Terrorist groups like Islamic Jihad launch rockets at Israeli territory across the border, and Israeli authorities fear a new campaign of suicide bombings. Angry at Israel's declaration that it would not allow residents of East Jerusalem to vote in legislative elections, and concerned that his party, Fatah, will lose ground to the militant Islamic group Hamas, Abbas has yet to decide whether to allow the elections, scheduled for Jan. 25, to take place.

The growing chaos on the Palestinian side will be the most pressing issue for Ehud Olmert, Sharon's successor as stand-in prime minister. Olmert does not have 100 days of grace; he barely has 100 hours. Taking charge less than three months before the election, Olmert must unify Kadima behind him and convince the public that the new party is a serious enterprise and not a fad, and that he could truly fill Sharon's shoes. Indeed, during his first 48 hours in his new job, Olmert extracted pledges of support from almost all leaders of Kadima, who were handpicked by Sharon, while bargaining to keep the elder, highly popular Shimon Peres -- who had lost the Labor primary and defected to Sharon -- at his side.

Israeli elections are almost always held during some security crisis, and soon enough, the new leader will have to make decisions on matters of life and death. A new wave of Palestinian terrorist attacks may strengthen Binyamin ("Bibi") Netanyahu, the right-wing Likud leader and Olmert's old nemesis. For many Israelis, the situation recalls the days after Yitzhak Rabin's assassination in November 1995, when Shimon Peres, who replaced him, lost the election to Bibi following a series of bus bombings.

The 60-year-old Olmert has been a fixture in Israeli politics for over three decades. He was born to a right-wing Revisionist Zionist family. His father had been a Knesset member in the '50s. Unlike Sharon or Rabin, Olmert ascended as a politician and businessman (he was a successful lawyer), not as a military man. Having served several terms as minister, and for almost a decade as the mayor of Jerusalem, he gained a reputation as a highly effective manager, very articulate public speaker and a master of the political trade. In his current No. 2 position in Sharon's government, he is privy to top national secrets. Since Wednesday, he has been in charge of the country's intelligence services and nuclear establishment. He lacks, however, experience in giving operational orders, a necessary part of Israeli leaders' job.

Always well dressed and fit, with a penchant for thick cigars, Olmert lagged behind his peers in the run-up for national leadership. The public appreciated him, but never adored him. When Netanyahu left Sharon's cabinet in August, in protest of the Gaza withdrawal, Olmert succeeded him as finance minister -- the czar of Israel's domestic policy. Sharon's illness gave him the chance of his lifetime to climb the last rung of the ladder.

Politically, Olmert preceded Sharon in turning away from his old right-wing, greater-Israel positions. Moreover, unlike Sharon, who was always a pragmatist (he installed the settlements not out of religious or historical conviction but as a strategic and military tactic), Olmert grew up in an ideological home. His change of heart, therefore, was more fundamental. It came over two years ago, when he realized that Israel was unable to win the demographic contest with the Palestinians. He advocated unilateral withdrawal when it was still heresy to Sharon, and played a role in moving his master to the disengagement. Later, he pushed him toward dissolving the Likud and forming the new party.

In a long interview with the Israeli newspaper Yedioth Ahronoth, published in December 2003, Olmert laid out his vision for a deep Israeli withdrawal from the West Bank. His goal was to keep the demographic ratio of 80-to-20 between Jews and Arabs in Israeli territory. "It's the only way to keep Israel as a Jewish, democratic state," he said, warning that clinging to all of the occupied territories would only lead Israel to international isolation and boycotts. Olmert argued that Israel should go it alone, rather than wait for a Palestinian partner. He advocated annexing the large "settlement blocs" and the Old City of Jerusalem (including the Mount of Olives and a couple of adjacent Arab neighborhoods) under its control. Israel would give up the rest, including most Arab areas of East Jerusalem.

This plan, more or less, is supported by most leaders of Kadima, and could serve as the party's electoral platform. While falling below the minimum acceptable to the Palestinians under any final-status deal (the crucial differences involve the status of Jerusalem, which is a "red line" issue for both peoples, and of the large Israeli settlement blocs that stand outside the Green Line), it carries the hope of transforming the conflict from one between an occupying power and an occupied people -- a situation no longer tolerated in the world -- to a border dispute over about 10 percent of West Bank territory. Even so, it will mandate the resettlement of about 60,000 Israelis living in scores of settlements "across the barrier."

Olmert speaks very good English, has traveled extensively to America -- New York is his favorite -- and is well connected there. The Bush administration will most likely view him, and Kadima, as their favorites in the coming election. From the American perspective, Netanyahu is too hard-line and Amir Peretz, the Labor leader, too inexperienced. The same support is expected from Sharon's new friends like Hosni Mubarak, the Egyptian president, and E.U. leaders. There are no free meals, however: After the elections, they will present the bill -- West Bank withdrawal -- to the winner.

According to the polls, the majority of Israelis favor some sort of follow-up to the Gaza disengagement in the West Bank. Nevertheless, this does not guarantee its quick implementation. The new generation of Israeli leaders may lack Sharon's resolve. It definitely lacks his unmatched war hero credentials, which prevented his right-wing rivals from portraying him as a softy.

It is, therefore, too early to assess which scenario is more likely: a deep West Bank withdrawal and settlement removal, backed by strong American and European support; or another period of dangerous stalemate. Traumatized by the Gaza withdrawal and the loss of their leader, Israelis could back away from territorial concessions. On the Palestinian side, the shaky P.A. could collapse, with the vacuum being filled by militant groups. Not just Israeli voters, but Palestinian suicide bombers and rocket squads, hold the future in their hands.