The latest Supreme Court nominee has to face a Senate newly emboldened to challenge the imperial Bush presidency. And his paper trail gives senators plenty of ammunition to do it. 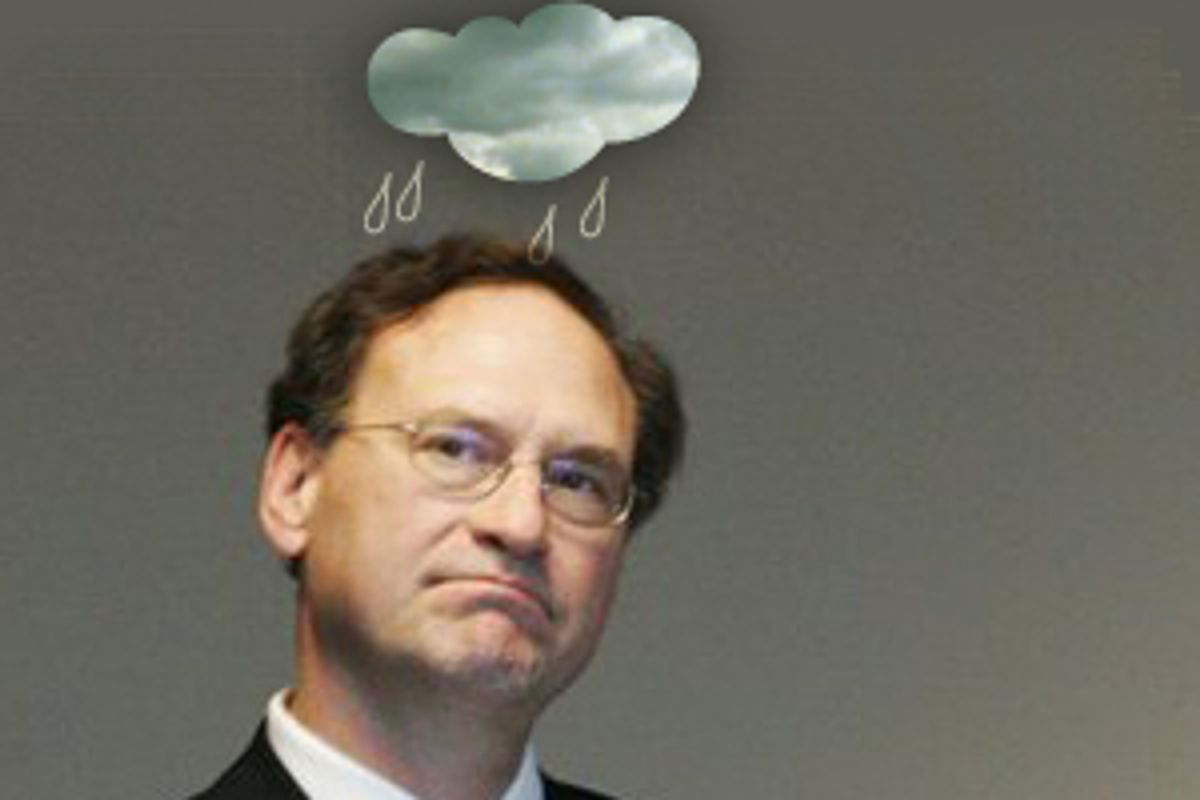 Samuel Alito is a passionate fan of the Philadelphia Phillies, a baseball team so star-crossed that it has won the World Series exactly once (1980) in the past century. Alito was already a federal appeals court judge in 1994 when he attended his favorite team's fantasy camp, where middle-aged men suit up in Phillies' uniforms for a few days on a spring-training diamond in Florida and pretend that with the right set of breaks they could have been big-leaguers themselves. Rooting for the Phillies and indulging his inner 11-year-old at fantasy camp should have taught Alito something about the role that luck plays in sports -- and, yes, the confirmation of Supreme Court justices.

At high noon Monday (or probably a few minutes later since we are going by congressional time), Alito will stride confidently to the witness table of the Senate Judiciary Committee, smile at the 18 preening senators on a raised platform, put on his most thoughtful, nonthreatening, man-of-the-people expression for the cameras and begin the most grueling version imaginable of the law boards. But before Alito is allowed to recite his opening statement (the major event of the first day), protocol demands opening statements by those 18 senators, all of whom will make a public-television pledge drive seem like a model of brevity in comparison.

Trying to look engaged while the 18 senators read prepared remarks that reflect the law-library erudition of their staffers, Alito will have ample time to reflect on how the political clouds have darkened for presidential appointees since Chief Justice John Roberts glided through his own confirmation hearings last September. As Garrett Epps, a professor of constitutional law at the University of Oregon and an Alito critic, put it, "He has the worst luck in the world to have his nomination come up in the middle of the NSA wiretapping scandal."

Context often trumps content in politics. Even before the New York Times revealed last month that George W. Bush has acted out his belief that court orders are for wimps when it comes to eavesdropping on purported terrorists, a rebellion was already brewing over the administration's assertion of wartime powers until the last surviving member of al-Qaida gives up and goes to work for Halliburton. The libertarian wing of the Republican Party belatedly showed its moxie when three conservative true believers (John Sununu, Larry Craig and Lisa Murkowski), plus GOP maverick Chuck Hagel, joined Senate Democrats in a filibuster that has delayed a no-questions-asked extension of the Patriot Act. The Senate also expressed rare bipartisan unity in support of John McCain's notion that torture should be regarded as the ultimate un-American activity. Newsweek summarized the changed mood with its cover line last week: "A New War Over the 'Imperial Presidency.'"

Concepts like the "imperial presidency" have a special meaning for those of us who came of political age during the Johnson and Nixon administrations. Ted Kennedy harked back to the favorite political scandal of aging Democrats when he said at a get-ready-for-Alito press conference last week, "The role of executive power [will be] an area of enormous importance and consequence during the course of this hearing because I believe that we have seen historically where presidents have believed that they are above the law. We saw that with Richard Nixon in Watergate." Even Texas Republican John Cornyn -- a Judiciary Committee member who began a conference call with reporters by denouncing "hard-left opposition groups" -- conceded, "I expect that you'll hear questions from both sides on this balance between civil liberties and security."

A fair reading of Alito's paper trail suggests a strong philosophical tilt in favor of bold Bushian assertions of presidential power. This conclusion is not based on the ideological assertions in Alito's now-famous 1985 job application when he was bucking for a promotion in the Reagan Justice Department: ''In college, I developed a deep interest in constitutional law, motivated in large part by disagreement with the Warren Court decisions.''

Instead, the smoking-gun document comes much later -- from November 2000 -- when Alito, then a federal judge, participated in a panel discussion sponsored by the Federalist Society, the mother church for conservative lawyers. In his presentation, Alito argued strenuously in favor of a hail-to-the-chief legal theory called "the unitary executive." (Note to readers: Relax, this won't be on the midterm.) Briefly, what this theory argues is that every part of the executive branch (including regulatory agencies like the Federal Trade Commission and, yes, independent counsels like Kenneth Starr) should be legally under the control of the president. While Alito himself did not mention national security in his speech, other proponents of this theory -- notably Dick Cheney's new chief of staff, David Addington -- have leaned on it to argue that a president can go beyond the law in carrying out his duties as commander in chief.

For those planning to follow the Alito hearings without the benefit of a legal education (having watched the O.J. Simpson trial on TV doesn't count), a senatorial question about "the unitary executive" should not serve as an excuse to raid the refrigerator. While Alito (following the precedent set by Ruth Bader Ginsberg) will almost certainly duck a specific question on the legality of NSA eavesdropping because it could become a Supreme Court case, he has nowhere to hide when asked to amplify his 2000 remarks to the Federalist Society. The questioning about this speech will probably provide the most definitive clues about how much a Justice Alito would worship at the altar of the imperial presidency.

Up to now, I have flagrantly violated the pundit's code by writing a preview of the Alito hearings that has not mentioned Roe v. Wade or that the next justice will be replacing Sandra Day O'Connor, the swing vote on virtually every divided issue before the court. The reason for this self-restraint is that the fate of the abortion decision and O'Connor's legal legacy are not, by themselves, enough politically to derail the Alito nomination. In early December, political strategists directing the opposition to Alito privately calculated that they had almost no chance of stopping the rush to giving Bush another justice.

A month later, the mood on the left is much less bleak and meek. The gathering opposition to the Bush-Cheney version of "Big Brother is watching you" represents part of the equation. Another element is the gathering confidence among Senate Democrats -- after delaying the Patriot Act and stopping Arctic drilling -- that Bush can be beaten. But the final factor is the great unknown hovering over the hearings: Alito in his courtesy calls on Democratic senators came across as lacking the easy charm of Roberts and seemed -- although no one will ever admit this on the record -- not very likable.

Kennedy, who calculates that he has voted on 22 Supreme Court nominees during his four decades in the Senate, offered a simple formula for handicapping this week's confirmation hearings. "All these nominees basically win it or lose it themselves," he said. "That's been my experience on the committee." The betting line still favors Alito, especially since it is unclear whether the Senate Democrats are willing to risk their recent political gains with a filibuster. But remember that when Alito was an impressionable teenager in 1964, his favorite baseball team lost 10 games at the end of the season to blow a pennant that was theirs for the asking.