Boring, but not scary

Samuel Alito came across as wimpy, but he didn't reveal any weird Bork-like tendencies. He's well on his way to joining a rightward-leaning high court. 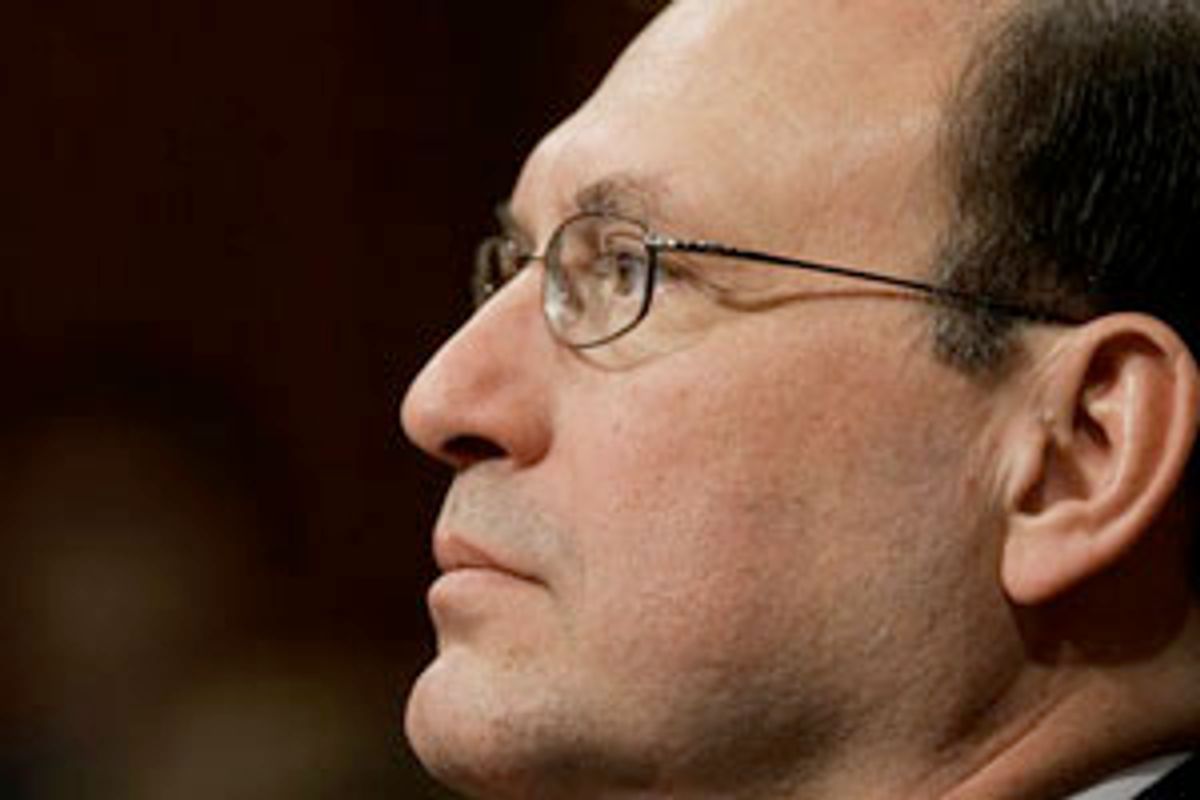 Perspective is everything in journalism, and mine offered a panoramic view of Samuel Alito's bald spot. Like the rest of the print press who chose to watch the opening day of the Judiciary Committee hearings live, I was seated behind the Supreme Court nominee and got a full-faced view of him only on the television monitors. This odd vantage point allowed me to dwell on Alito's down-to-earth personal grooming style (no fancy fluff jobs or desperate comb-overs for this proud son of New Jersey), even as the would-be replacement for Sandra Day O'Connor was bragging about his "unpretentious, down-to-earth" home town of Trenton.

I was in prime position, however, to study Alito's left profile when he was briefly forced to turn his head to offer a rapt gaze to the junior Republicans on the fringes (both physically and politically) of the committee lineup. I watched Alito as Oklahoma's rabidly antiabortion Tom Coburn thundered, "The question that arises ... as we approach a Supreme Court nominee is, where are we in America when we decide that it's legal to kill our unborn children?" Wait, did I detect the tiniest nod from the nominee? Or was that just an involuntary twitch of Alito's jaw muscles from the fatigue of pretending to listen intently to more than three hours of stentorian senatorial opening statements?

Reading Alito's physiognomy at moments like this may offer as good a clue to his potential high-court jurisprudence as anything else that comes up during the hearings. The truth is that the 20th century is littered with epic misjudgments of Supreme Court nominees. Hugo Black was pilloried for his 1920s membership in the Ku Klux Klan, but emerged as one the liberal pillars of the Warren court and joined in the unanimous decision outlawing school segregation. His colleague Felix Frankfurter was considered an ardent liberal when he was appointed by Franklin Roosevelt in 1939; instead, he is remembered as an old-fashioned conservative judicial icon.

Judiciary Committee chairman Arlen Specter, the only Republican on the committee who champions abortion rights, made an analogous point as he kicked off the hearings. "The history of the court is full of surprises on the issue," Specter said. "The major case upholding Roe was Casey v. Planned Parenthood, where the landmark opinion was written jointly by three justices: Justice O'Connor, Justice Kennedy and Justice Souter." Specter gleefully pointed out that each of those three justices came to the court with a reputation for being antiabortion.

None of this should suggest that Alito is another stealth moderate in the mold of David Souter. Rather, Specter was probably indulging in wishful thinking as he tries to convince himself that he can play the loyal Republican by supporting Alito while not ending up as an architect of a Supreme Court that overturns Roe v. Wade. Unequivocal as Alito's antiabortion record appears to be, virtually all the evidence is at least 15 years old. The job-seeking memo in which Alito bragged of his belief that the Constitution does not guarantee abortion rights dates back to 1985. Even the most clear-cut abortion case that has come before Alito on the federal appeals court (Casey v. Planned Parenthood, in which he dissented) was decided in 1991.

When the real fireworks begin on Tuesday, the most frustrating problem for committee Democrats in quizzing Alito is the sort of artful blandness that Ruth Bader Ginsburg got away with during her own 1993 confirmation hearings. Ginsburg, who was confirmed by the Senate on a 96-3 vote despite having once worked as a staff attorney for the American Civil Liberties Union, kept repeating pieties such as, "I am a judge. I am not an advocate." When Utah Republican Orrin Hatch, still on the committee, pressed Ginsburg to clarify her views on capital punishment, she unyieldingly replied, "I have tried to be as forthcoming as I can while still preserving my full and independent judgment."

Principle is a malleable concept when it comes to high-stakes fights over Supreme Court nominees. Republican bleats that all judicial nominees deserve an up-or-down vote now sound ludicrous after conservatives deep-sixed Harriet Miers before she was even allowed to testify. In similar fashion, it is difficult for Democrats to credibly demand that Alito speak in detail about his judicial philosophy on issues like abortion since the party defended Ginsberg in her you-can-ask-but-I-won't-tell tap dance. That pesky bit of precedent did not prevent Democrat Joe Biden from telling Alito at Monday's hearing, "I believe we -- you and I and this committee -- owe it to the American people in this one democratic moment to have a conversation about the issues that will affect their lives profoundly. They're entitled to know what you think."

The obstacle for Alito's foes is that the appeals court judge does not fit into any of the patterns that have derailed Supreme Court nominees in the past 40 years. He certainly has not made segregationist speeches like G. Harrold Carswell (Nixon, failed class of '70). He does not have the grave ethical problems that destroyed Lyndon Johnson's attempt to make Abe Fortas chief justice. While Alito may have been remiss in not recusing himself from a few cases, his conflict-of-interest lapses pale in comparison with those of Clement Haynsworth (Nixon, failed class of '69). And with a sterling academic background and 15 years on the federal bench, Alito will never be confused with the under-credentialed Miers.

All this brings us to the only Supreme Court nominee who failed on ideological grounds -- Robert Bork in 1987. But the bearded Bork with his brooding countenance failed to win confirmation because he was, well, scary. As I watched Alito deliver his unrevealing opening statement in a nervous voice, he came across as a milquetoast, more Dagwood Bumstead than Darth Vader. Alito gave just one brief flick at a more combative persona when he said, in harking back to his student days at Princeton in the 1970s, "I saw some very smart people and very privileged people behaving irresponsibly." If Alito can get through the next 48 hours of questioning by being smart, boring and ever so responsible, he will be well on his way to joining a rightward-leaning Supreme Court.