Alito, you're no John Roberts

In the first day of his confirmation hearings, Samuel Alito displayed none of the dexterity and charm of Bush's newly minted chief justice -- and may face a rougher ride later this week. 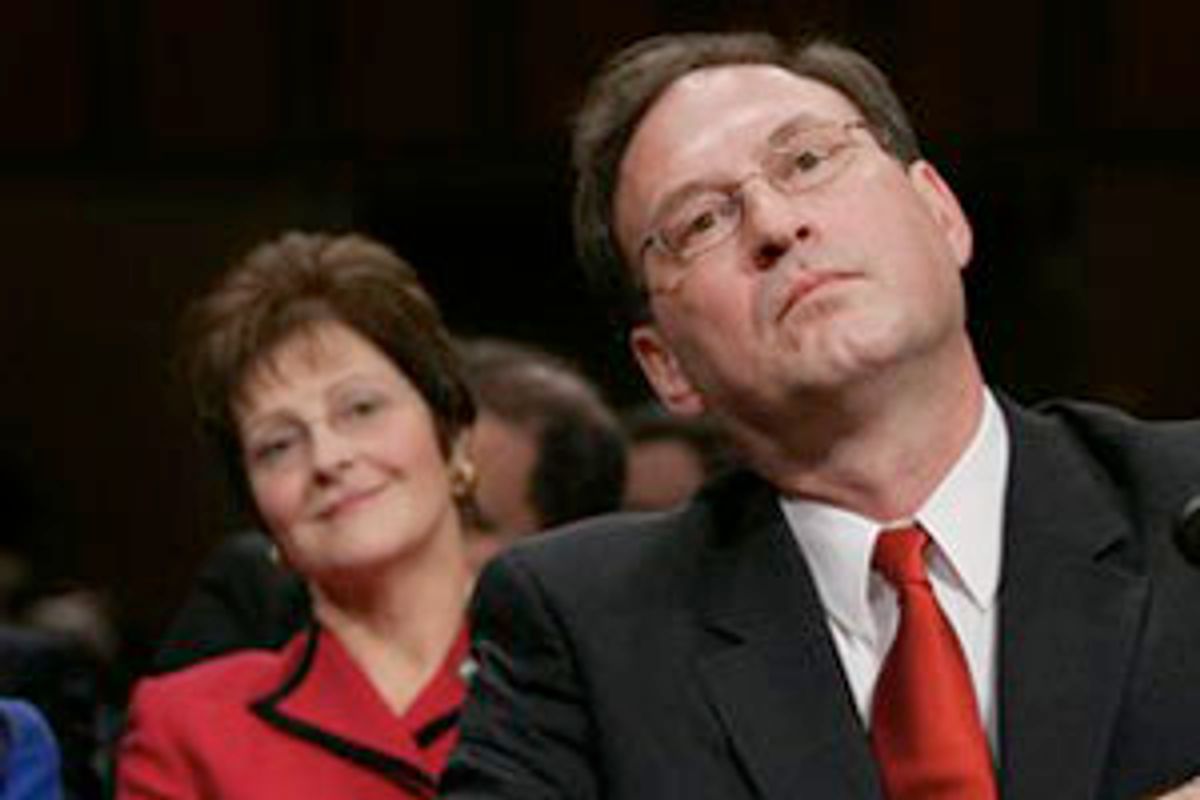 No doubt about it, Judge Samuel A. Alito Jr. had a tough act to follow.

Just four months ago, John G. Roberts Jr. appeared before the same Senate panel, trim and tan, with mahogany hair and blue eyes that pierced through the television lights. He brought his two storybook children, and a calm authority that drew envy from even his most avid opponents. In the Senate Caucus Room, gilded in gold and strung with chandeliers, Roberts delivered an opening statement from memory that was almost poetic in its exacting brevity. He did not use a single note card to guide him. When he was done, the whole room seemed to swoon.

On Monday, Alito gave it an old New Jersey try. But his skin looked pale, his thinning hair came out of place, and his voice sounded nasal. He fiddled with his fingers as he spoke and cocked his head. After Sen. Arlen Specter, R-Pa., asked him for an opening statement, Alito took almost 30 seconds to pour himself a glass of water, take a sip and unfold notes from his jacket pocket. He began by telling a joke about a nervous lawyer who had fumbled under pressure during an appearance before the Supreme Court, but he bungled the punch line. Then, he declared, "I have often asked myself, how in the world did I get here?"

In the jargon of national politics such superficial details are known as "the optics," the sort of markers that have nothing to do with political or intellectual merit, but still might catch someone's attention when played on a TV hanging in the neighborhood bar. By all rights, they should not matter in the nomination of a Supreme Court justice, but no one doubts that they do. It did not help Alito any that the Senate Judiciary Committee chose to have the first day of hearings in the committee chambers of the Hart Senate Office Building, a sterile room filled with hard rectangular surfaces that still looked modern when it was completed in 1982.

Outside the hearing room, where the partisans and the special interests gathered to spin, some took heart from the early atmosphere of the event. "This nomination has a totally different feel from Roberts'," said Nan Aron, the president of Alliance for Justice, a liberal coalition of consumer, civil rights and women's groups that is opposing Alito. "There was from Day One an air of inevitability about Roberts."

Those seats in the gallery not devoted to the working press were given over to supporters and detractors who sat silently with competing stickers on their lapels. The red stickers said, "Confirm Alito." The pink stickers said, "This Is What a Feminist Looks Like." But even these activists seemed muted in their passions. "This is one of those boring stories we can tell our children about because Judge Alito will still be around," said Ben Pierce, a 17-year-old home-schooler from Scottsboro, Ala., who came to show his support for the nomination. By the end of the day, after about four hours of predictable opening statements from blustery senators, empty seats dotted the public gallery.

Supporters of the president's nominee did not appear worried. The scuttlebutt for months has described Alito as a lesser performer to the Oscar-caliber Roberts. Alito takes time to warm up. He needs a couple of seconds to process tough questions. He also has a larger judicial record to defend. Whereas Roberts' personal beliefs had been obscured by years of private practice, Alito arrived before the committee with a vast paper trail. By Sen. Specter's count, Alito has cast 4,800 judicial votes and written 361 published opinions over 15 years. "That presents a challenge as well as an opportunity," said an optimistic Leonard Leo, of the conservative Federalist Society, who is one of several outside advisors to the White House on judicial nominations.

In many other ways, Roberts and Alito have lived the same career. Both used their brains and their drive to rise from modest families into the upper echelons of the Ivy League. Roberts chose Harvard for both his undergraduate and legal degrees, while Alito went to Princeton and then Yale. Both arrived in Washington with President Ronald Reagan, and both took jobs at the Justice Department. Both claimed conservative positions on the most electric issues of the day, including civil rights and abortion.

But in the coming days, the differences between the two men will probably be more glaring. At his hearing, Roberts had a calming voice, and Alito's quivered with nerves. Roberts looked like a guy who would play touch football with the Kennedys in their compound, or climb into a canoe in an L.L. Bean catalog. Alito comes across as a very intelligent actuary, or a defendant in a white-collar trial. When Roberts sparred with Democratic senators, his tone was one of polite camaraderie, as if he were a professor debating a point with an academic colleague he respected. When Alito described the role of the judge on Monday, he sounded didactic, like a teacher explaining a lesson to a middle school student. "In every single case," Alito instructed, "a judge has to do what the law requires."

All this could add up to a far more suspenseful confirmation hearing than the coronation that greeted Roberts. The GOP majority in the Senate will certainly grease his way, but Alito shouldn't be sizing his new robes just yet. "Hey, I was here for Clarence Thomas," said James Parmalee, president of Republicans United for Tax Relief, who held a pro-Alito sign on the street before the hearing began. "You never know when something is going to become contentious."