The moribund hearings have been as predictable as a Kabuki drama. Barring a major miscue, Alito's inscrutability will carry him to the Supreme Court. 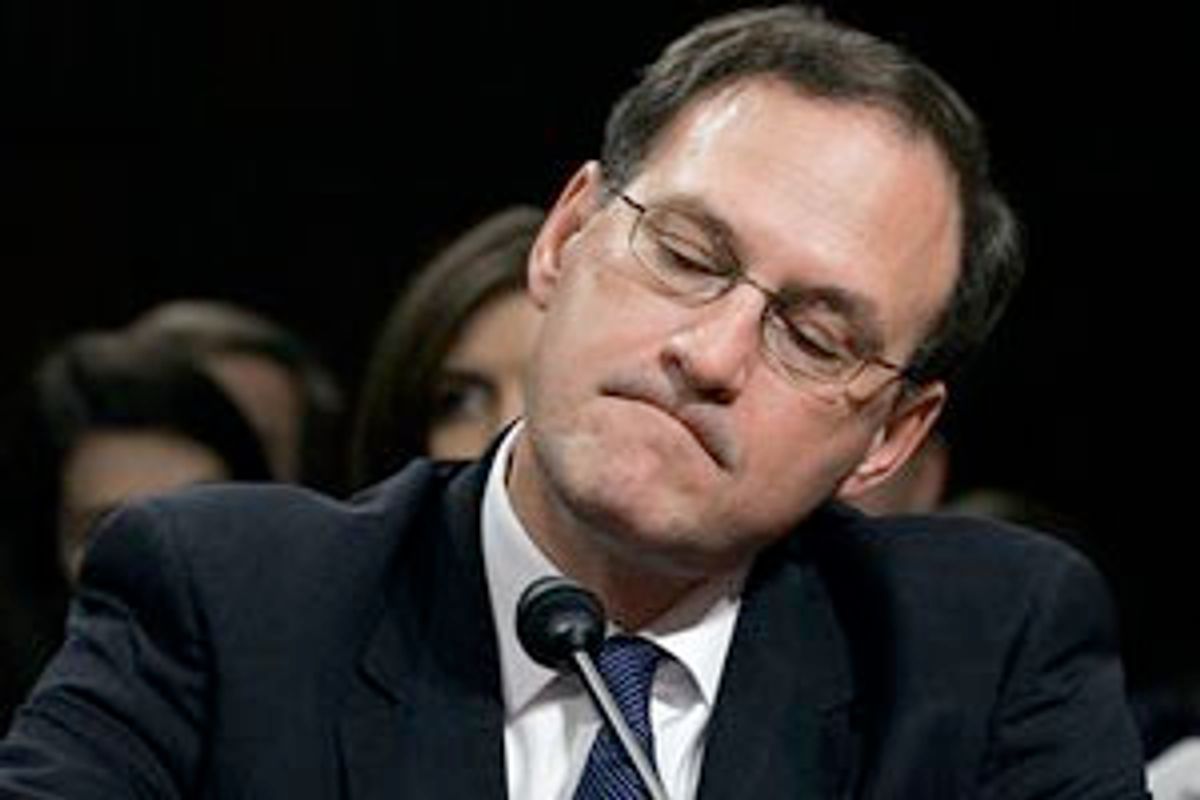 After nearly eight hours Wednesday, Democrats finally drew a little blood from Judge Samuel A. Alito Jr. Just a little. Barely a pinprick. But the exchange woke the sleeping press corps from its slumber, and showed instantly what a farcical spectacle the whole proceeding had become.

At issue was Alito's decades-old membership in a noxious group of Princeton graduates called the Concerned Alumni of Princeton. Alito had boasted of his CAP membership in a 1985 job application bucking for promotion in the Reagan Justice Department. By that point, CAP was more than just a conservative club opposed to the pace of change at Princeton; by the 1980s it was an outpost for bigotry. In CAP's journal, Prospect, old-school authors repeatedly wrote about the decay of Princeton's Christian, white and male pedigree. "People nowadays just don't seem to know their place," read one article from 1983, which targeted minorities, homosexuals and the handicapped. "Everywhere one turns blacks and hispanics are demanding jobs just because they are black and hispanic."

No one has accused Alito of sharing these views. In fact, several Democrats pointedly noticed the contradictions between Alito's biography and his CAP membership. "It doesn't fit with your background," observed Joe Biden of Delaware. Alito, for his part, has all but renounced CAP, a group he now claims to have forgotten about almost entirely. "I deplore those statements," Alito said of the Prospect.

Nevertheless, Democrats, desperate for a way to sink Alito, spent much of the day asking about CAP. By the time New York's Chuck Schumer got his time at the microphone, it appeared no more information could be wrung from the nominee's limited memory. But Schumer decided to repeat a line of questioning that had frustrated Biden several hours earlier. Why, he asked, had Alito chosen to list CAP on his application? Surely, there were other groups he belonged to? For the first time all day, Alito took the bait. Perhaps from boredom or exhaustion, the nominee answered with candor, pointing to the fact that the job application had asked for evidence of "philosophical commitment" to Reagan's policies. "I think you have to look at the question I was responding to and the form I was filing out," Alito said. "I was applying for a position in the Reagan administration."

The 30 or so print reporters still left in the gallery that once numbered more than 100 sat up and began to scribble. It has become conventional wisdom that Alito need say nothing more to assure his nomination to the Supreme Court. Yet here he was, cracking open a new avenue of Democratic attack. In one fell swoop, Alito had drawn a clear connection with an ideological group everyone decries and the policies of the Republican administration.

To be sure, the coup was minor, saying little about Alito's own qualifications. But the precedent it sets should give Democrats hope as they begin the fourth and final day of Alito's grilling. Without more breakthroughs, the hearings will surely end as they began, an elaborate teledrama in which senators lecture for the cameras and the nominee ducks questions with bland statements about the law. The rules of the game were aptly described by Biden last fall, just before the Judiciary Committee voted to recommend Judge John G. Roberts Jr. for the Supreme Court. "These hearings have become a sort of Kabuki dance," Biden said at the time. "We all sit down and we reread everything that the person has ever said, they sit down at the White House or whatever and they look at the film of all the hearings that went before. Everybody figures out this kind of 'I-Gotcha' game."

Until his momentary slip-up, Alito has clearly been winning. For much of Wednesday, the senators spent far more time addressing each other and the public than the nominee. There was so much squabbling that the proceedings were repeatedly delayed out of the senatorial tradition of allowing colleagues a chance to respond to their attackers.

It all started when the militantly pro-life Tom Coburn of Oklahoma excoriated Dick Durbin of Illinois when Durbin was not in the room, holding up a giant poster board that showed Durbin had once opposed abortion. Durbin, who makes no secret of that fact, later wanted to respond to Coburn, but Coburn had left the room, so Durbin announced that he would wait. When Coburn finally returned, Durbin said he also wanted to address a statement by Orrin Hatch. But since Hatch was absent, committee chairman Arlen Specter asked Durbin to wait. Then Specter announced that he had some public words for Ted Kennedy. But Kennedy was missing, so Specter sat on his haunches. Alito, meanwhile, followed the bouncing ball.

Throughout it all, he sat politely in the witness chair, dressed for the first time in a blue tie, not a red one, one of his most controversial moves of the hearings. Perhaps from exhaustion, his daughter and in-laws did not appear as before to offer support, and his wife left the hearing room in tears at one point.

Alito's strategy is to be invisible in plain sight. He repeatedly offered legal history lessons in lieu of answers, showing no shame at politely repeating his past non-statements. "Senator Durbin said 'Justice Roberts retired the trophy on performance,'" quipped California's Dianne Feinstein at one point. "If that's true, you retired the trophy on equanimity."

When asked if Roe v. Wade was settled law, Alito said that depended on the definition of "settled." When asked about his theory of executive power, he said the president must follow the Constitution. When asked if he would support televising Supreme Court arguments, he said he would keep an open mind. He even wavered when asked if he was fan of Bruce Springsteen, a fact that had been reported by the Washington Post: "I am, to some degree, yes." In the meantime, the senators chased their favorite issues down rhetorical dead ends. Coburn, a still-practicing doctor, talked about his membership in the American Medical Association and brooded on the psychological effects of abortion. Kennedy, in an exchange with Specter, informed the chamber that he had not been to the congressional gym since before Christmas. Kansas' Sam Brownback explained his preference for a "a robust public square" over a "naked public square."

"I suspect that if it were not for the TV cameras the hearings would be over by now," declared Arizona's Jon Kyl, standing, of course, before a bank of four TV cameras outside the hearing room.

Barring any more clumsy admissions by Alito, or a late-breaking smoking gun, the hearings are destined to end soon. All signs point to Alito's subsequent approval by the Senate. At that point, America and the Senate Judiciary Committee will be left to ponder Biden's musings from the final moments of the Roberts hearing. "I am moving to the view that I'm not sure these hearings are the proper way to determine how to vote for a judge," Biden admitted then. "Maybe we should go back to the pre-1926 rule, and just look at what they wrote and said and make our judgments."

After sitting through nine hours of testimony on Wednesday, it's hard to see what the democratic process has to lose.