Preacher and professor Michael Eric Dyson attacks America's reaction to Katrina as racist, ignorant and inept. But his rushed book is little more than a soggy rehash. 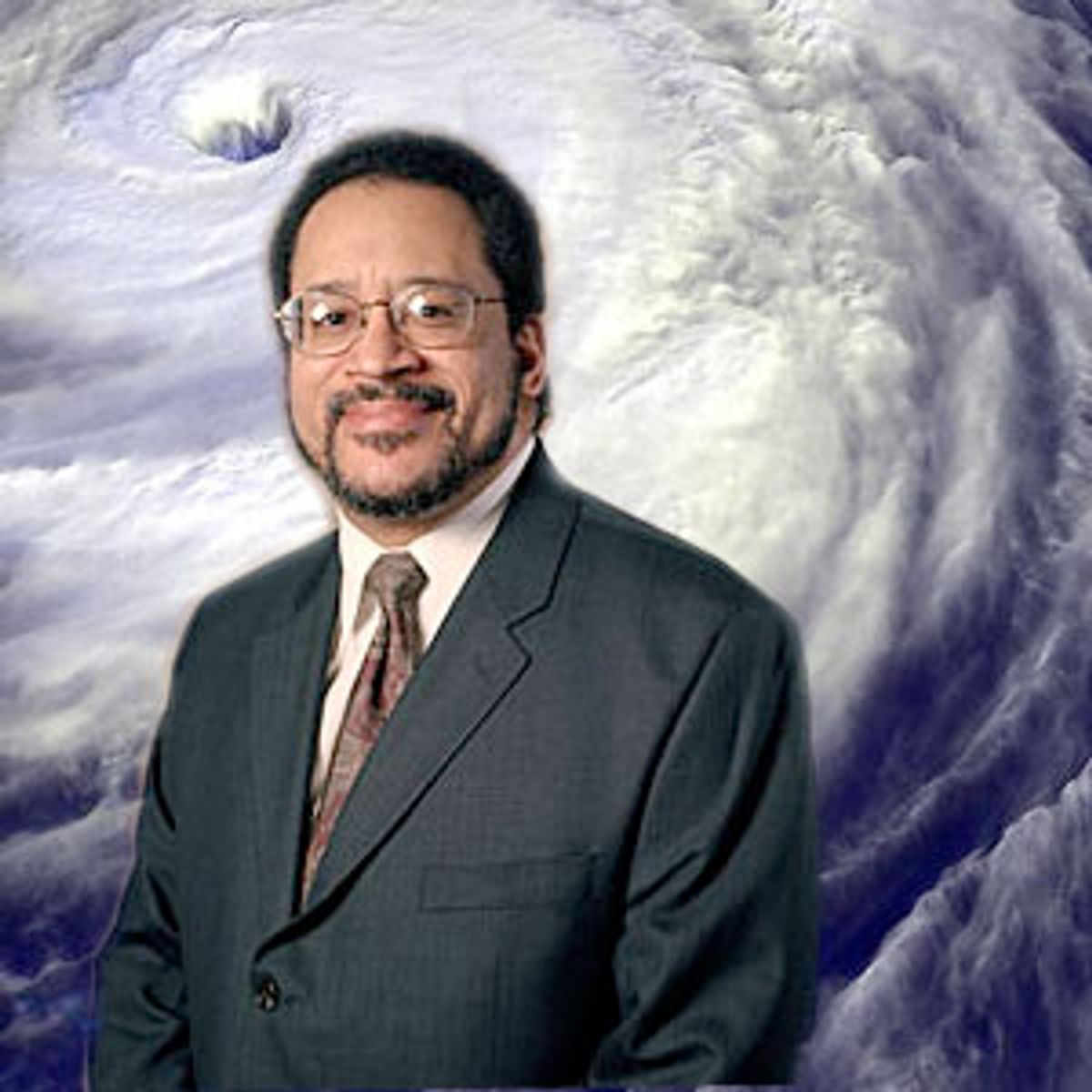 When the apocalypse comes, Americans will have to sit though a lot of tedious commentary about it, if the aftermath of Hurricane Katrina is any indication.

On the ground here in the days just after the storm, one could hardly imagine how anything worse could ever happen. As the city filled with water, desperate people waded to higher ground, trudged along the city's elevated expressways, gathered at the Louisiana Superdome and the Ernest N. Morial Convention Center because they had nowhere else to go. Stores were being looted, and some police officers and firefighters were taking part in the action. In much of the city, law enforcement and emergency medical services were nowhere in evidence. For those of us who live in New Orleans and love the city, it was hard to find words to describe how shocking all of this was.

Of course, plenty of one-note opinion-mongers must have known what they thought of the disaster before it even happened. As Michael Eric Dyson notes in "Come Hell or High Water," Louis Farrakhan predictably declared that Katrina was divine punishment for American racism and military aggression. Others said the hurricane was God's way of smiting gay people. Bill O'Reilly argued that the suffering in New Orleans was a cautionary tale about laziness and drug addiction -- an apparent dig at the poor black evacuees whose plight filled the nation's TV screens. New Orleanians were dying in their attics and drowning in the street, but even then some commentators couldn't be bothered to change their shtick.

The apparent purpose of Dyson's new book is to offer a counterweight to uninformed statements like O'Reilly's. Dyson is a University of Pennsylvania humanities professor, a Baptist minister and a prolific author; he has written books about Malcolm X, Martin Luther King Jr., Marvin Gaye and Tupac Shakur. "Come Hell or High Water" is the first book-length analysis of how racial and class dynamics shaped the Katrina crisis. Unfortunately, the book is too rushed and unfocused to add much to our collective understanding of the disaster.

In the first chapter alone, Dyson rambles through statistics on poverty and automobile ownership in New Orleans, a history of the flood-ravaged Lower 9th Ward, a criticism of George W. Bush's education policies, a call for better health care for black Americans, and a discussion of writer Michael Ignatieff's claim that the U.S. government has failed to hold up its end of the "contract of American citizenship." The second chapter examines musician Kanye West's assertion that "George Bush doesn't care about black people." Dyson then moves on to a lengthy survey of the history of the federal role in emergency management and a chronology of the days just before and just after Katrina struck. He weaves from one subject to another with dizzying speed.

To the extent that Dyson has any overarching argument, it's a familiar one: That the racial and economic profile of Katrina's most conspicuous victims affected how the media covered the disaster and how the federal government reacted to it. News organizations, Dyson says, were quick to reinforce stereotypes about African-Americans as violent and criminal. Early reports of an epidemic of rapes, murders and other atrocities at the Superdome and Convention Center, he notes, soon turned out to be unfounded. Would news organizations have been more skeptical if thousands of wealthy white suburbanites had gathered in makeshift shelters? Almost certainly. Likewise, if a natural disaster had overwhelmed local authorities in Falls Church, Va., or Coral Gables, Fla., and if well-heeled residents were begging for help on camera, would the Bush administration have let them fend for themselves for days on end? Surely not.

Still, the demographics of Katrina are more complicated than Dyson and many other people realize. To the east of New Orleans, beyond the easy reach of cable news channels, St. Bernard Parish, a predominantly white suburban community, was flooded from the Gulf of Mexico to the Mississippi River levees, and the death rate per capita was similar to that in the city. More than 120 people perished there, including 34 patients at a single nursing home. Indeed, the most striking pattern in the death statistics for the entire metropolitan area isn't the victims' race but their advanced age. And while Dyson presumes that the only people who would fail to heed an evacuation order were those who couldn't afford cars, it now appears that most of those who were killed by Katrina stayed willingly. Evacuating for a hurricane is a major undertaking, even for people of means; moving people who are in fragile health can endanger their lives; because hurricanes menace the Gulf region every year, residents pick and choose which ones to fear.

These nuances have become clearer in the months since the storm, and they do not inform "Come Hell or High Water." Instead, much of the book is a rehash of, or a rejoinder to, various pronouncements that filled the nation's airwaves, Op-Ed pages and computer screens in early September.

Dyson is miffed, for instance, about the sudden discovery by comfortable Americans of the grinding poverty that afflicted so many Katrina evacuees -- a discovery that he views as a form of vanity and willful ignorance. "Our being surprised, and disgusted, by the poverty that Katrina revealed is a way of remaining deliberately naive about the poor," Dyson writes, "while dodging the responsibility that knowledge of their lives would entail. We remain blissfully ignorant of their circumstances to avoid the brutal indictment of our consciences." Fine, but Dyson doesn't seem to know where to take the argument from there. And some of the conclusions he comes to don't make much sense. Drawing on a sheaf of news articles (including, for what it's worth, articles published in the newspaper I work for) he details a variety of missteps by the Federal Emergency Management Agency and other government bodies, and he shows that former FEMA honcho Michael Brown was a bungler and a boob. Yet Dyson goes on to declare, "Had Brown been a cabinet member, his stature may have won him the president's ear and confidence."

At this point, the sins of FEMA have been amply catalogued, and the focus of news coverage has moved on to mining disasters and Samuel Alito. Yet much of New Orleans is still without power and without residents, and the city is struggling with a host of racially charged questions that Dyson never begins to engage. Should New Orleans rebuild hard-hit neighborhoods -- many of which are predominantly black -- or encourage residents to move to higher ground within the city? If some poor black evacuees find better homes and jobs in Houston or elsewhere, to what lengths should the city go to bring them back? At what point, if ever, should evacuees who don't return stop voting in New Orleans elections? These issues were already simmering in the early days of the Katrina crisis, when Dyson presumably began writing "Come Hell or High Water." But nothing in his book furthers those discussions or gets New Orleans closer to any answers.

Instead, the book is a frustrating tangle of dropped threads. Though Dyson interviewed a number of Katrina survivors, those discussions barely register in his text. The book is peppered with bits of wordplay -- "FEMA-nizing disaster," "theolateral damage" -- that are more clever than meaningful. And Dyson refights old battles. In his last book, he took issue with Bill Cosby for suggesting that poor African-Americans were holding themselves back through their language and choice of clothing. In "Come Hell or High Water," he goes after pundits, such as columnist Cynthia Tucker of the Atlanta Journal-Constitution, who agreed with Cosby but later expressed sympathy for Katrina's victims. To his credit, Dyson is willing to debate the religious implications of the deadly storm -- something that many other commentators, particularly those of a leftish bent, are hesitant or unwilling to do. But in his final chapter, he dwells on other writers' attempts to explain how a just God could permit such suffering. Rather than bring a preacher's passion to academics or a scholar's rigor to religion, he brings LexisNexis to both.