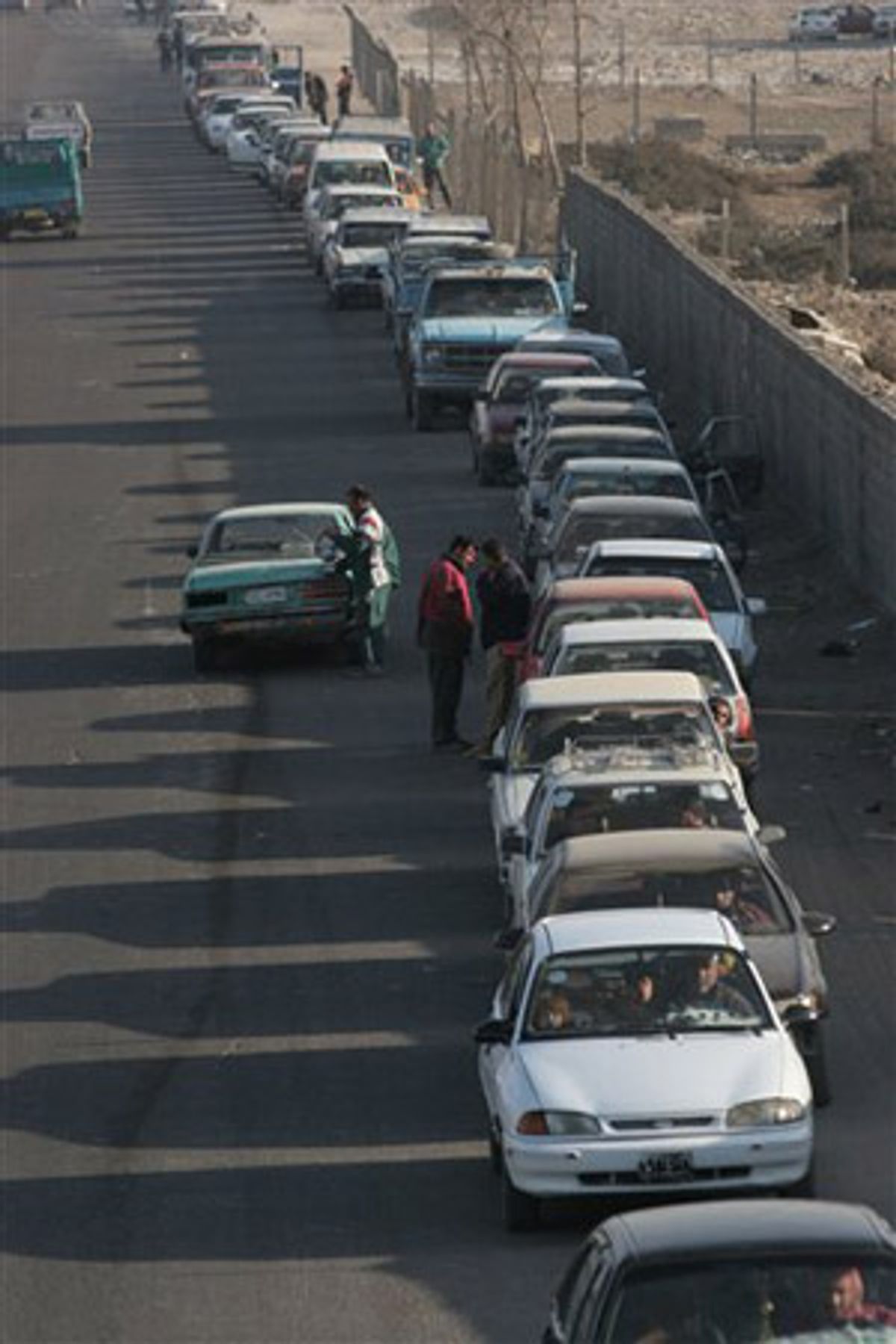 We know that the Bush administration was flat wrong about weapons of mass destruction in Iraq. And now, nearly three years after the beginning of the war, it's also clear that top Bush officials were just as delusional about Iraq's energy business and how critical the energy sector would be to achieving security and stability in Iraq. Continuing failure with this vital part of the reconstruction is costing the United States -- and the Iraqi people -- very dearly.

During the run-up to the war, the Bush administration denied that oil was a factor in its desire to oust Saddam Hussein from power: Defense Secretary Donald Rumsfeld, during a November 2002 interview with CBS News' Steve Kroft, declared that the approaching U.S. invasion had "nothing to do with oil, literally nothing to do with oil." But four months later, as U.S. troops seized Iraq's oil infrastructure and closed in on Baghdad, then-Deputy Defense Secretary Paul Wolfowitz (now the president of the World Bank) made it clear that Iraq's oil was going to save American taxpayers a lot of money. Wolfowitz told Congress on March 27, 2003, that the U.S. was "dealing with a country that can really finance its own reconstruction, and relatively soon." He added that Iraq's oil revenues could "bring between $50 billion and $100 billion over the course of the next two or three years."

Instead of the energy riches predicted by Wolfowitz, millions of Iraqis are now living in dire energy poverty. In Baghdad, there is little or no electricity, little or no motor fuel, and little or no kerosene for home heating. Moreover, according to energy expert Jim Placke, who has been following Iraq's oil business since 1959 when he worked for the State Department in Baghdad, the situation appears to be getting worse. The insurgents are targeting the energy infrastructure with increasing success, says Placke, who is a senior associate at Cambridge Energy Research Associates. "By doing so, they embarrass the coalition forces and the Iraqi government that they can't keep gas stations supplied with motor fuel. It's very disruptive and it makes the average Iraqi's life that much more difficult."

From the outset, America's game plan in Iraq has depended on the ability to control the flow of energy. Whether for the gargantuan amounts of fuel needed by U.S. troops on the ground, the export of Iraqi crude, or the production of motor fuel at the refineries in Baghdad and Baiji, the U.S., as Wolfowitz suggested, was depending on Iraq's vast oil reserves to keep the Iraqi economy afloat and to sustain the rebuilding process in the post-Saddam era. But despite the $30 billion that U.S. taxpayers have spent to rebuild Iraq and its energy infrastructure, Bush policies have resulted in scant progress. A Government Accountability Office report released last October summarized the situation, saying that yet more reconstruction money will be needed "due to the severely degraded infrastructure, post conflict looting and sabotage, and additional security costs." That same report says that soaring security costs are soaking up much of the money that was originally earmarked for energy infrastructure.

Meanwhile, the insurgents are targeting every part of the energy infrastructure -- crude oil, electricity, refined products -- and the American military has been able to do little to stop the destruction. And it's killing the Iraqi economy.

On Jan. 4, an Iraqi writer who uses the pseudonym Riverbend and posts on the Baghdad Burning blog, wrote about the plight that she and other Baghdad residents are facing: "How about 6 hours of no electricity for every one hour of electricity? Or ... 6 hours of waiting in line for gasoline that is three times as expensive as it was in 2005?" On Jan. 2, Najma, a 17-year-old student living in the northern city of Mosul who blogs on A Star From Mosul, wrote a post for the New York Times, in which she discussed the frequent electricity outages. As for motor fuel, she wrote that "prices in the black markets dropped to only 12 times the legal price. If someone chooses the hard way, he can wait in the line for up to a day -- a line that is not less than three kilometers." In late December, Najma wrote that because of surging gasoline prices, her father was "now paying more than half of his salary on fueling the cars. Students at the universities are on strike now because they can not afford paying for the gasoline."

The surge in fuel prices is due, in part, to the Iraqi government's decision to reduce its fuel subsidies. Last year, Iraqis were paying about 5 cents for a gallon of gasoline. The International Monetary Fund agreed to forgive much of Iraq's debt if the country cut its fuel subsidies. In December, the Iraqi government agreed and raised prices. But the resulting surge in prices has led to widespread anger among Iraqis who are now paying up to 65 cents per gallon. That may sound cheap by U.S. standards, but even the best-paid workers in Iraq make only about $130 a month, and a quarter of the population lives on just $1 per day.

While fuel prices are surging, a key concern is supply, which is being hampered by both corruption and insurgent attacks. There are conflicting accounts of a Jan. 4 attack on a fuel tanker convoy that was to replenish service stations in Baghdad. Reuters reported that 20 of the 60 trucks in the convoy were destroyed. Other reports said fewer trucks were destroyed, but whatever the actual number, tanker trucks are now a prime target of the insurgents, who have been attacking them for months. The U.S. military provides armed escorts to the tanker trucks that are importing its fuel from Jordan and Kuwait. Many of the convoys are also escorted by a helicopter gunship. But it is not clear if the U.S. military has diverted any of its resources toward protecting tanker trucks that are delivering fuel for Iraqi civilians.

Meanwhile, according to a recent New York Times report, the city of Baghdad is now using about 2.4 million gallons of motor fuel per day, so the average Iraqi among the 5.9 million residents of the war-torn capital is using less than a half-gallon of fuel per day. That means that the average American soldier in Iraq is using nearly 40 times more fuel per day than the average Iraqi. That disparity will only compound resentment of the U.S. presence, says retired Army Lt. Gen. Jerry Granrud, who served during both the Vietnam War and the first Gulf War. If Iraqis are waiting for hours in line to get fuel while the Americans are driving around in their Humvees and other vehicles, Granrud says, "They'll get madder than hell at their government and at U.S. forces."

Iraq's crude oil pipelines are in tatters. The Institute for the Analysis of Global Security reports that Iraq's pipelines have been attacked nearly 300 times since mid-2003. Repeated insurgent attacks are preventing Iraq's oil ministry from exporting any oil from its northern oil fields through the Turkish port of Ceyhan. Instead, all of the country's oil must be exported through two oil terminals (both built by Halliburton in the 1970s) on the Persian Gulf.

The pipeline attacks are preventing Iraq's refineries in Baghdad and Baiji from running at full capacity. According to an Energy Information Administration report written last month, "Iraqi refineries currently are operating at only 50 percent to 75 percent of capacity, forcing the country to import around 200,000 bbl/d [barrels per day] of refined products, at a cost of $200-$250 million per month."

Because of pervasive corruption within the energy sector, much of that refined product is not getting to Iraqi consumers, further exacerbating prices. "The black market is flourishing," a former Iraqi oil ministry official told Salon. The official, who now works for an international oil company and was granted anonymity because he was not authorized to speak to the press, said that much of the fuel that is either produced by Iraqi refineries or bought from foreign suppliers "is being re-exported," to neighboring countries. Some of the stolen fuel is also being sold on the domestic black market.

According to Placke, Iraq's oil fields need at least $10 billion in immediate investment just to stabilize production from the existing fields, many of which have been damaged by poor maintenance and over-production. But getting that investment is impossible given the ongoing security problems in Iraq. And therein, says Placke, lies the conundrum of Iraq's tremendous oil wealth: "Until there's security they can't develop the oil resources they need to fund their security. And I don't know how that endless cycle stops."

As that quagmire deepens, Iran is exerting more influence on Iraq's energy affairs. Two decades ago, during the bloody Iran-Iraq war, the Iraqis bombed one of Iran's main oil export terminals, Kharg Island. But last July, the two countries agreed to a deal that will allow the Iraqis to export crude oil from Kharg Island. The swap agreement allows the Iraqis to ship crude from their oil fields near Basra to Iran's Abadan refinery. In exchange, the Iranians will ship a similar amount of their crude from Kharg.

It's not yet clear how this new Iraq-Iran energy deal will affect the global flow of oil out of the Persian Gulf, but the alliance appears to be deepening. On Jan. 9, Iran's MEHR news agency reported that Iran is building new power transmission lines into Iraq. Although the initial lines will carry only 230 kilowatts of power, the agency predicts that Iran could eventually export 1,000 megawatts of power to Iraq.

Right now Iraq needs the Iranian power, because its own electrical system is a disaster. In this area, the U.S. has mismanaged and squandered much of a $4 billion project to restore Iraqi electricity, according to a recent report in the Los Angeles Times. The October GAO report pointed out that by July 2005, about 30 percent of the money that was budgeted for electricity projects a year earlier had instead been diverted into security spending. Inefficiency and waste have been pervasive in other ways: "Due to limited access to natural gas, some Iraqi power plants are using low-grade oil to fuel their natural gas combustion engines," the report said. "The use of oil-based fuels, without adequate equipment modification and fuel treatment, decreases the power output of the turbines by up to 50 percent, requires three times more maintenance, and could result in equipment failure and damage that significantly reduces the life of the equipment."

America and Iraq are "coming to a crucial point" with Iraq's energy situation, according to Phebe Marr, a senior fellow at the U.S. Institute of Peace and a leading historian on modern Iraq. "When the new government gets established, it must decide what it will do with its oil resources: Who will control it? Will it be centrally controlled? I predict it's going to be very difficult." Marr says she is "not totally pessimistic" about the situation in Iraq today. But right now the country "is failing," she says, "and it could keep going down."